Even After the Oscars, Most Americans Still Aren’t Familiar With Best Picture Nominees 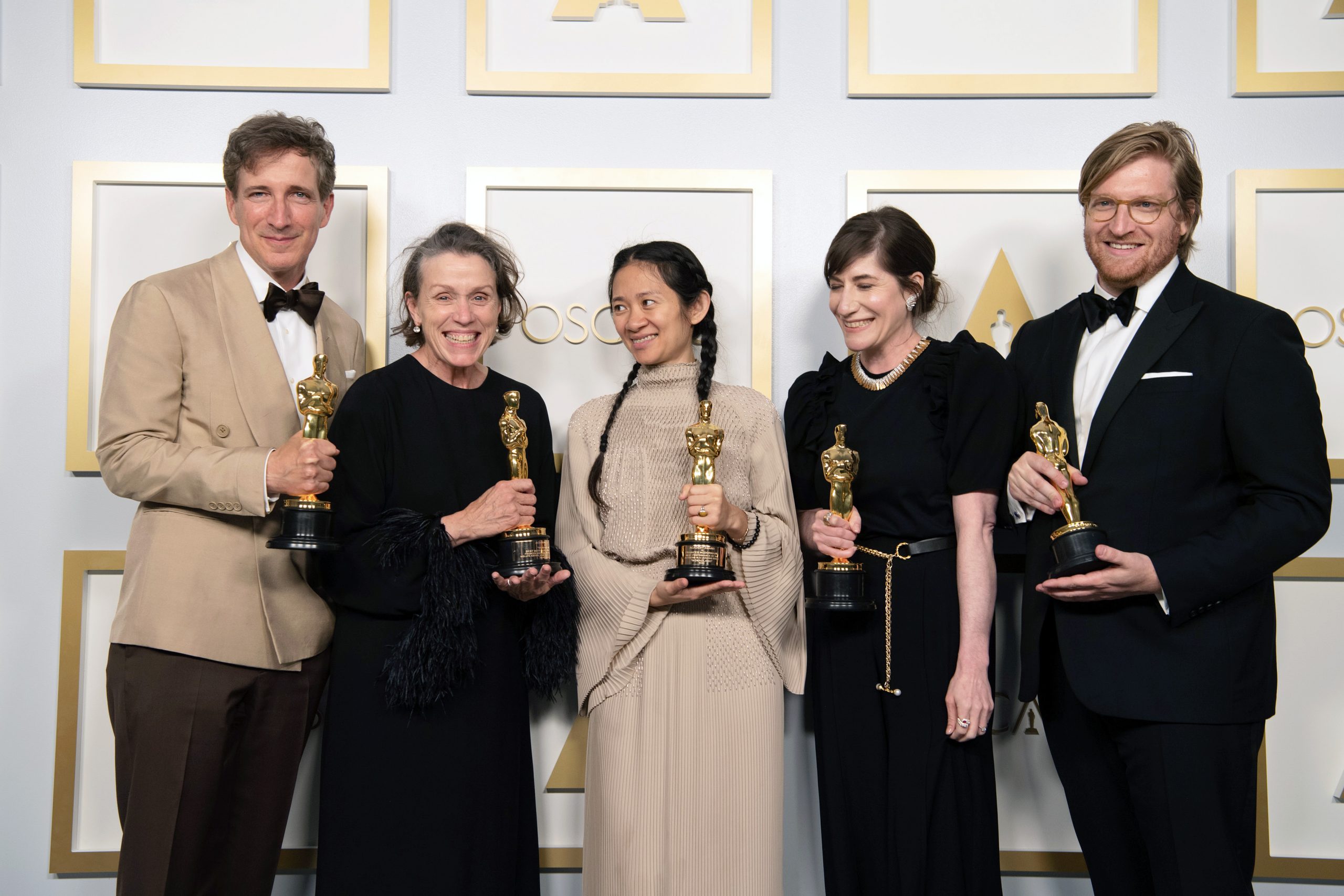 From left, Peter Spears, Frances McDormand, Chloe Zhao, Mollye Asher, and Dan Janvey, winners of Best Picture for "Nomadland," pose in the press room during the 93rd Oscars at Union Station on April 25. After the Academy Awards, the film saw the largest increase in awareness of the category's nominees, according to new Morning Consult polling. (Matt Petit/A.M.P.A.S. via Getty Images)
By Sarah Shevenock & Alyssa Meyers

With the majority of consumers unfamiliar with the year’s best picture nominees heading into the Academy Awards, Sunday’s ceremony only brought small upticks in awareness, according to Morning Consult polling.

In the nine weeks prior to Hollywood’s biggest night, on average, 19 percent of consumers had heard “some” or “a lot” about the eight films nominated for best picture, according to Morning Consult data, even with the majority of them available to stream at home. 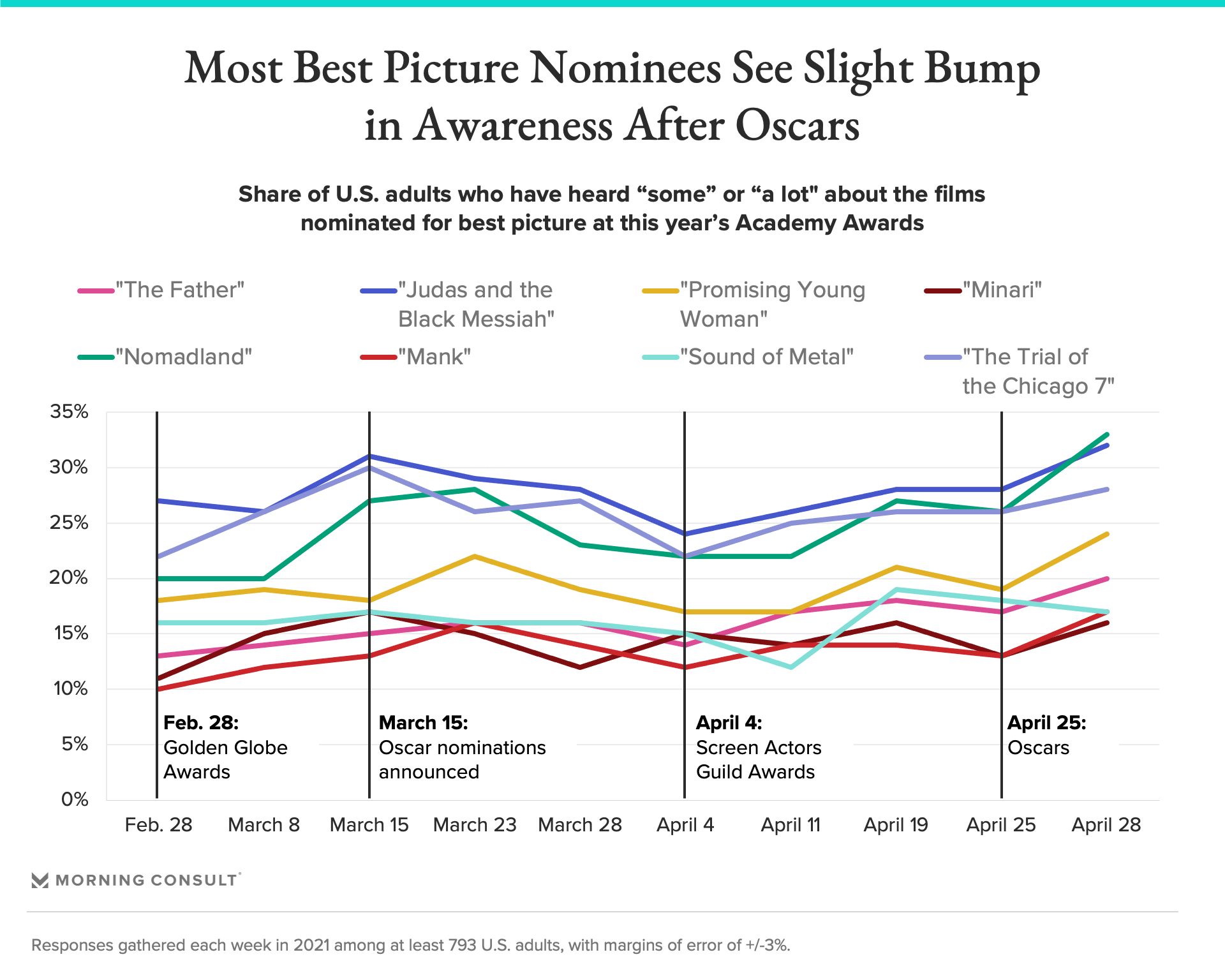 The low levels of awareness were due to the pandemic’s upending of films’ marketing campaigns and the nominees’ subject matter not resonating with consumers, experts said.

Jon Selman, executive vice president of commercial and awards with Vision Media, said these films faced stiff competition simply because of the number of streaming services and the volume of content on each platform.

With attendance down at movie theaters, he added, marketers also lost many ways to reach consumers.

“There was really no outlet to market these films,” Selman said, noting that in a theater, films can be advertised via posters, digital ads and concession items. 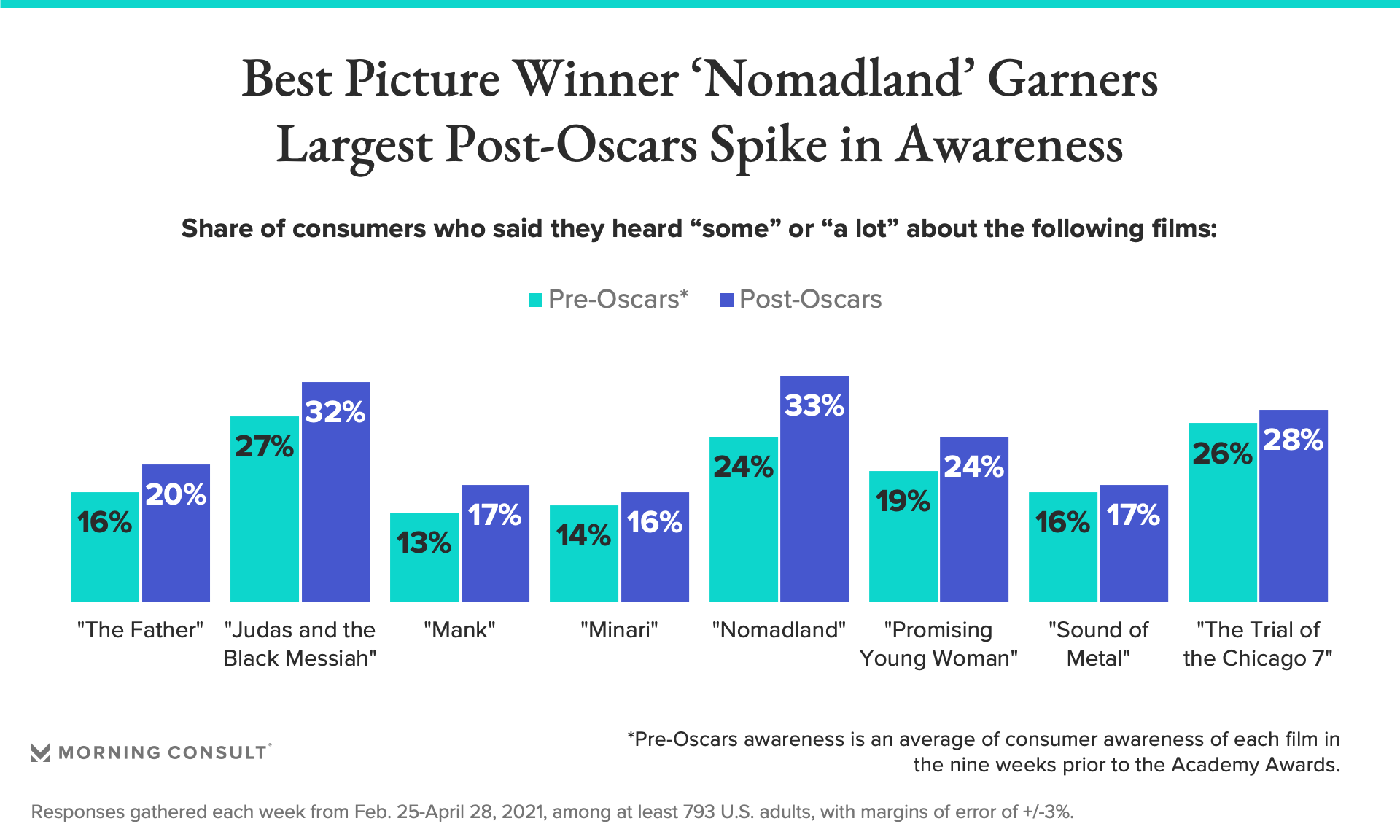 In a Morning Consult survey conducted April 27-28 following the Oscars, the share of U.S. adults who had heard at least some about the best picture nominees increased, but not by much, to an average of 23 percent.

In general, awareness increased over the nine-week, pre-Oscars average by only a few percentage points for each film. However, “Nomadland,” which won best picture, saw awareness increase by 6 points this week, while “Promising Young Woman,” winner of best original screenplay, experienced a 5-point uptick.

“Judas and the Black Messiah” continued to rank highly in terms of familiarity, roughly matching the awareness of “Nomadland” in the wake of a big win for the Chloé Zhao-directed film.

“The Father,” “Minari” and “Promising Young Woman” all played theatrically and are available via premium video on demand, but the remaining five titles — “Judas and the Black Messiah,” “Mank,” “Nomadland,” “Sound of Metal” and “The Trial of the Chicago 7” — debuted on subscription streaming services.

But even with streamers advertising the films on their homepages, Selman said these movies are reaching only a portion of the potential audience.

“You’re advertising directly on HBO Max,” he said, referring to “Judas and the Black Messiah.” “Normally, that is going to be advertised on cable on ABC, Super Bowl ads, things like that. It just wasn’t there this year.”

The subject matter of the best picture nominees — which touch on topics including dementia, sexual assault and social unrest — may also have turned some viewers off, said Turner Classic Movies host Dave Karger.

“The films that were nominated this year, by and large, are intimate dramas, with, in many cases, difficult — or to some people, depressing — subject matter,” Karger said. “These are not movies that a lot of regular moviegoers necessarily feel like they want to see.”

The Oscars are the conclusion of a monthslong fête of the most-celebrated films and TV shows of the year. The runup to the big night includes stops at the Golden Globe Awards and Critics’ Choice Awards, as well as guild ceremonies, including the Screen Actors Guild Awards and the Producers Guild Awards.

Viewership for the Golden Globes declined more than 62 percent year over year, while the audience for the SAG Awards was roughly half of the number of viewers who tuned in last year, according to Nielsen.

While Karger acknowledged that many viewers who actively choose to watch these ceremonies are already knowledgeable about the nominees, low viewership for the Globes “obviously hurt the awareness factor for a lot of these movies that otherwise would have gotten a bigger boost.”