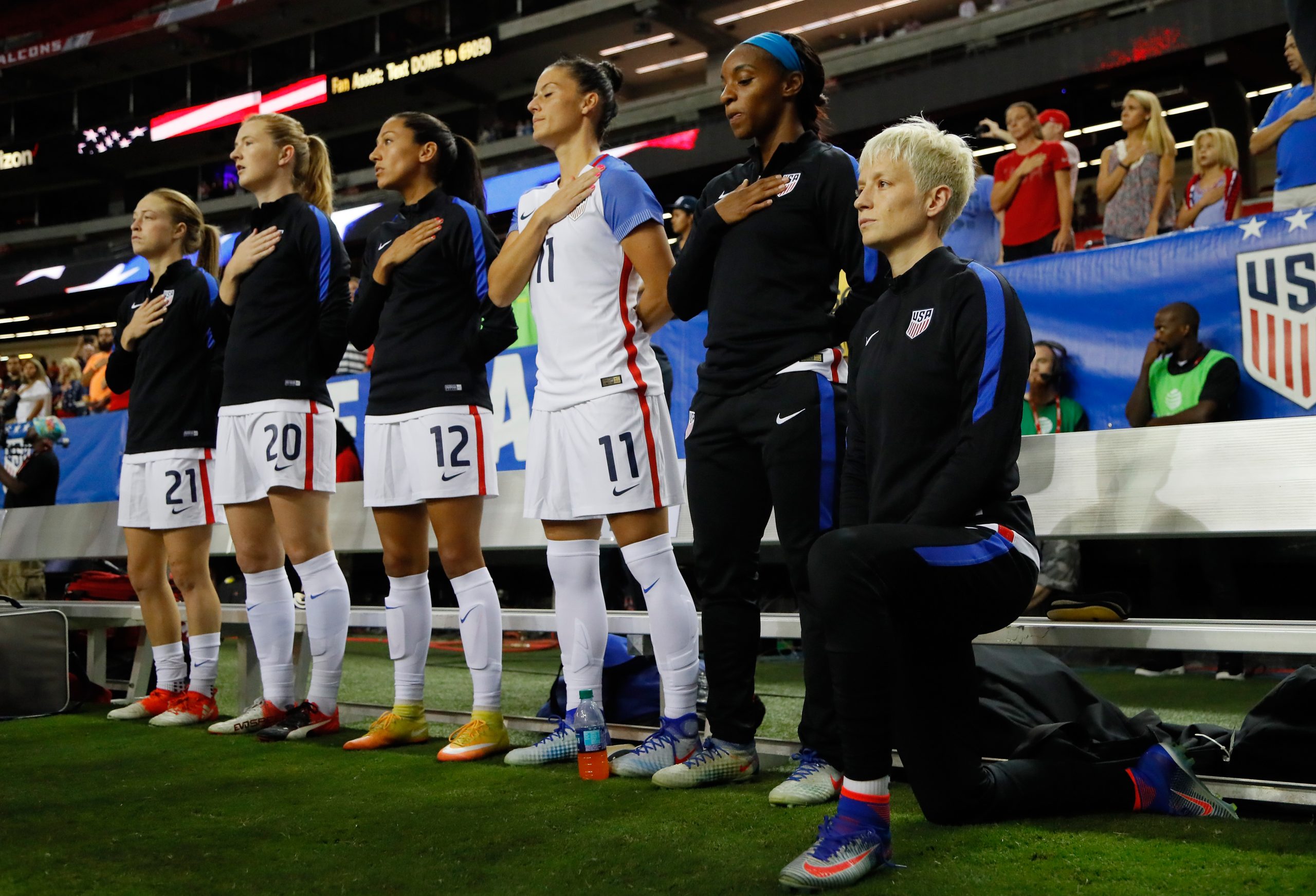 Megan Rapinoe, right, kneels during the national anthem prior to a 2016 match between the United States and the Netherlands. New polling indicates 46 percent of U.S. adults support the International Olympic Committee's plan to punish athletes who protest at this summer's Tokyo Games. (Kevin C. Cox / Getty Images)
By Alex Silverman

On-field activism became ubiquitous in North American sports last year following the murder of George Floyd and shooting of Jacob Blake by police officers, but the International Olympic Committee recently reaffirmed that protests won’t be tolerated at this summer’s Tokyo Games. New research indicates that Americans who plan to watch the Olympics largely agree with the IOC’s policy.

In explaining its decision to maintain a ban on athlete protests, which is spelled out in Rule 50 of the Olympic Charter, the IOC cited a survey in which 70 percent of competitors said it was inappropriate to demonstrate on the field of play, on the medal stand or during the opening and closing ceremonies. The IOC said it will draft a proportionate range of punishments for violators prior to the games, which begin July 23. 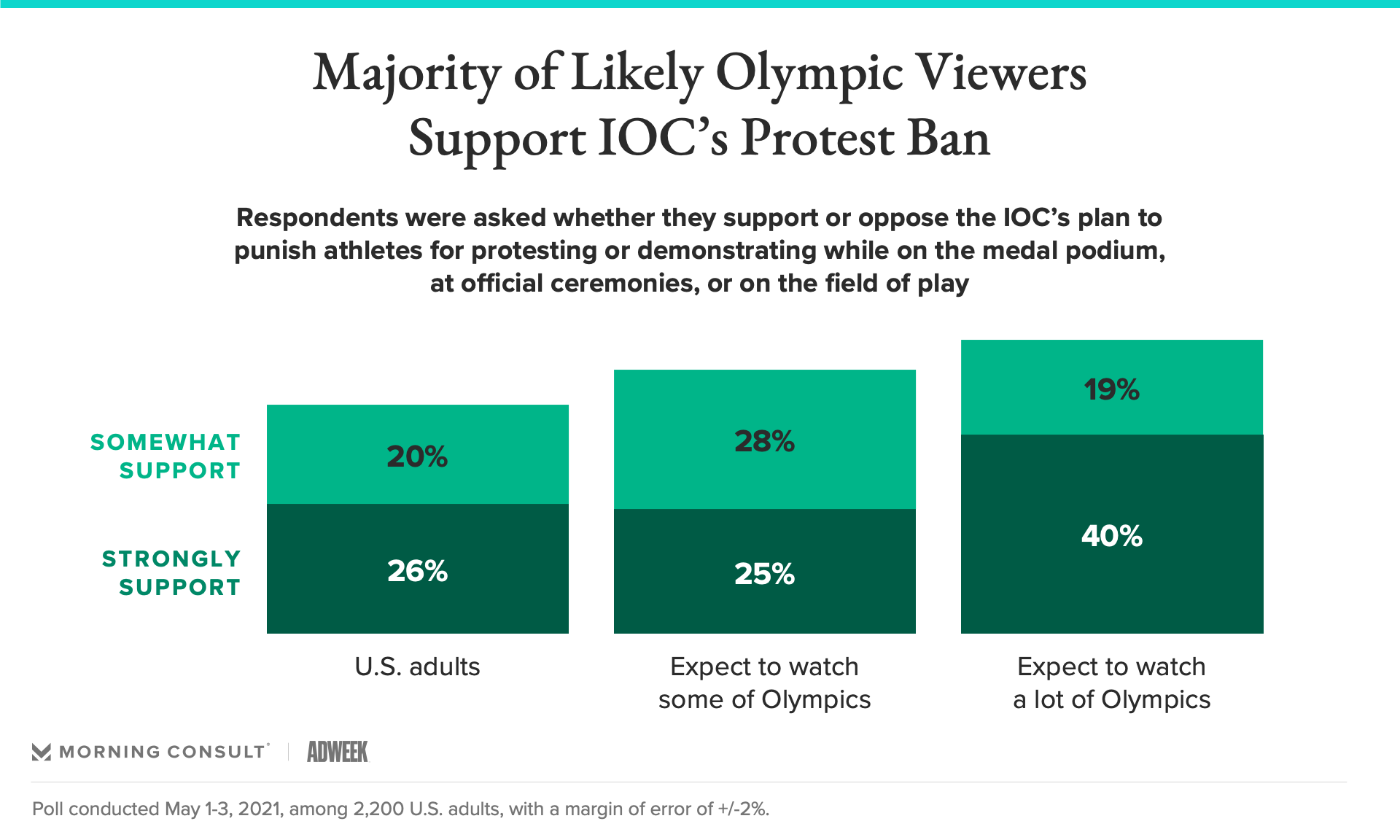 Among the 16 percent of Americans who said they plan to watch “a lot” of the Olympics, 2 in 5 respondents “strongly” backed the IOC’s restrictions on demonstrations.

The margin of error for the 2,200 U.S. adults polled is 2 percentage points, while the group of 806 individuals who plan to watch “some” of the games and 353 people who plan to watch them “a lot” carry margins of error of 3 points and 5 points, respectively.

The IOC’s dogged defense of its long-standing rule runs counter to the stance taken by the United States Olympic and Paralympic Committee, which said last year that it would not penalize its athletes for raising their fists, as American sprinters Tommie Smith and John Carlos did at the 1968 Olympics, or kneeling during the national anthem. 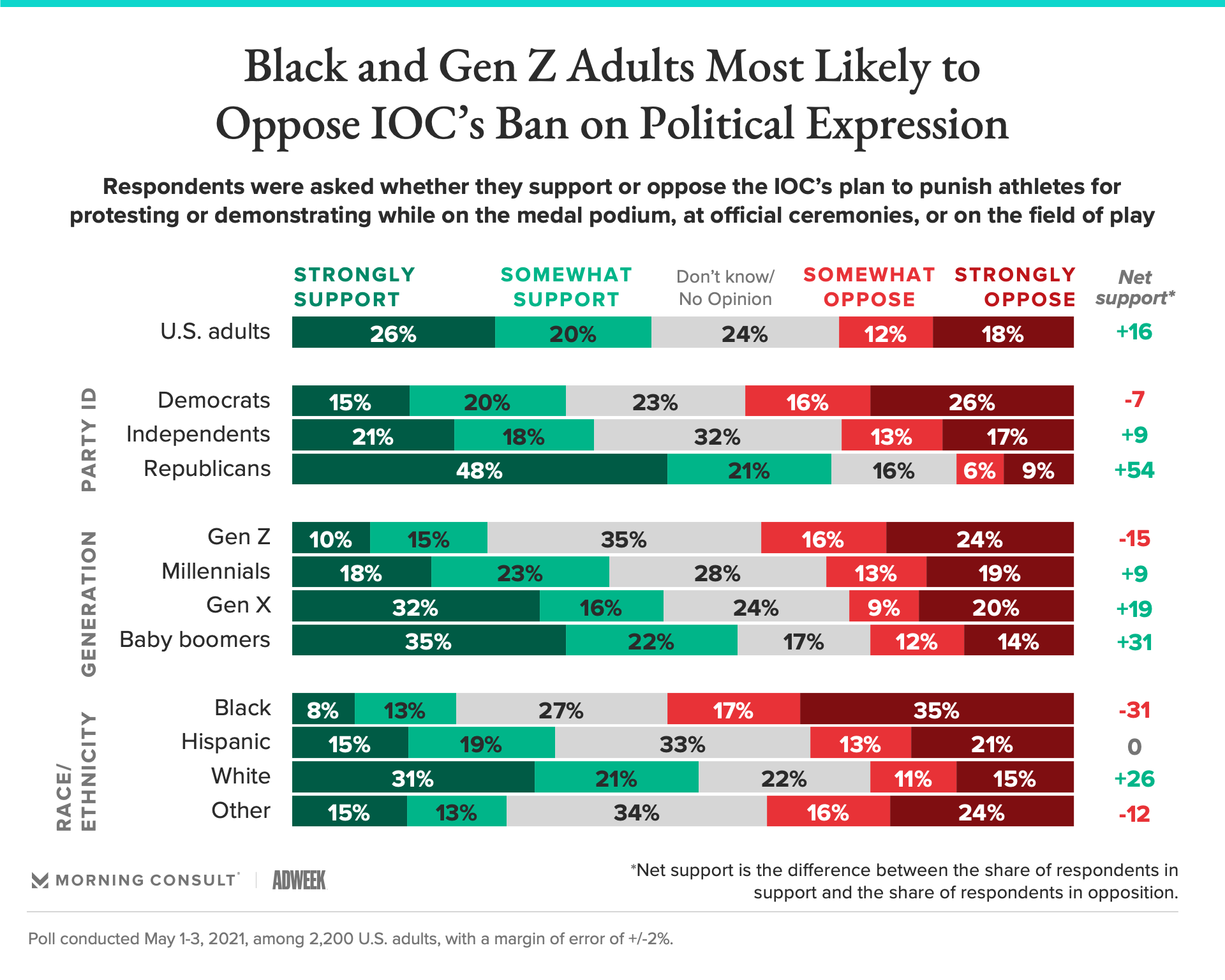 Sixty-nine percent of Republicans supported the IOC’s moratorium on demonstration, more than four times the share of those in their ranks who opposed the policy. Democrats were more evenly split, with 42 percent opposing the ban and 35 percent favoring it. Independents sided with the IOC by a 9-point margin.

Meanwhile, 52 percent of Black respondents opposed the IOC’s plan to punish activism from athletes, compared with 21 percent who supported the policy. Hispanic adults were evenly split, with 34 percent in favor of the IOC’s decision and 34 percent against it. White adults were twice as likely to agree with the protest ban as to disagree with it, with 52 percent in favor and 26 percent opposed.