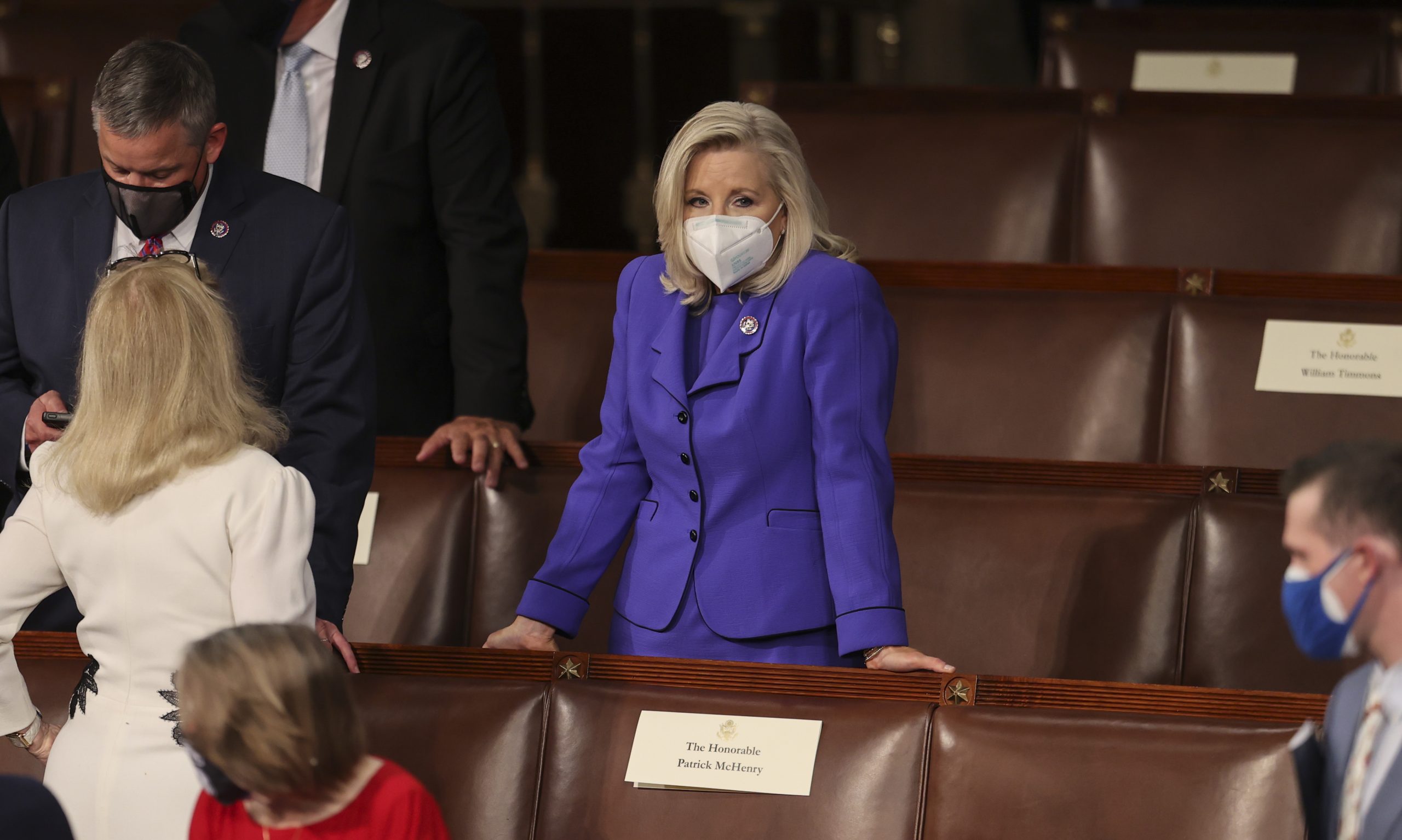 Rep. Liz Cheney (R-Wyo.) stands in the House chamber ahead of President Joe Biden's first address to a joint session of Congress on April 28. House Republicans are expected to vote today to remove her from her leadership post as caucus chair, the No. 3 position in leadership. (Jonathan Ernst-Pool/Getty Images)
By Eli Yokley

Half of Republican voters in a new Morning Consult/Politico survey said the House Republican Conference should remove Cheney as conference chair, compared with 18 percent who said she should retain her post. The May 7-9 survey of 1,994 registered voters has an overall margin of error of 2 percentage points, while responses among Republicans carry a 4-point margin of error. 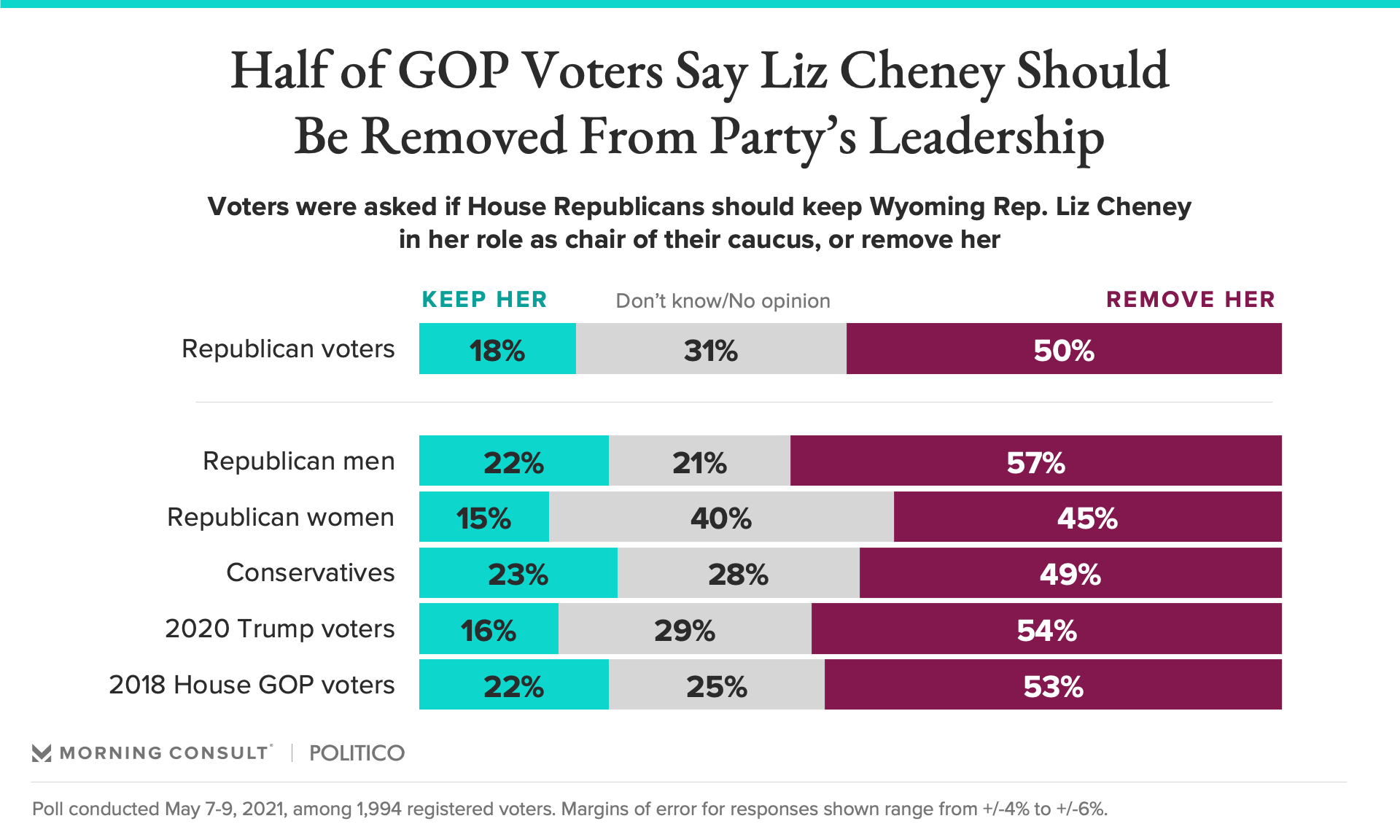 Republican men were 12 points more likely than Republican women to support the push for Cheney’s removal, which came after she doubled down on her critique of Trump’s rhetoric during the recent congressional recess. In a Washington Post op-ed, she wrote that her party must choose between the 45th president’s undemocratic approach or “truth and fidelity to the Constitution.”

That line in the sand, which came after other comments critical of Trump, may have been the last straw for House Minority Leader Kevin McCarthy (R-Calif.), who endorsed Cheney’s removal in a letter to lawmakers, saying that the leadership team of the GOP — which he described as a “big tent” — “cannot afford to be distracted from the important work we were elected to do.”

Cheney already survived one attempt at her removal in early February in what several reports said was a 145-61 vote, when a subset of Trump-aligned lawmakers pressed for her demotion after she voted to impeach the 45th president for inciting the Jan. 6 riot.

Polling at the time found that negative sentiment about Cheney among Republican voters fell after she retained her seat, but increased blowback from her Republican colleagues appears to have taken a toll on the third-term lawmaker’s popularity ahead of another vote on her position within the caucus. According to the latest survey, 43 percent of Republican voters view Cheney unfavorably, compared with 14 percent who hold favorable views. The numbers are little changed from the poll conducted ahead of the first vote on her removal. 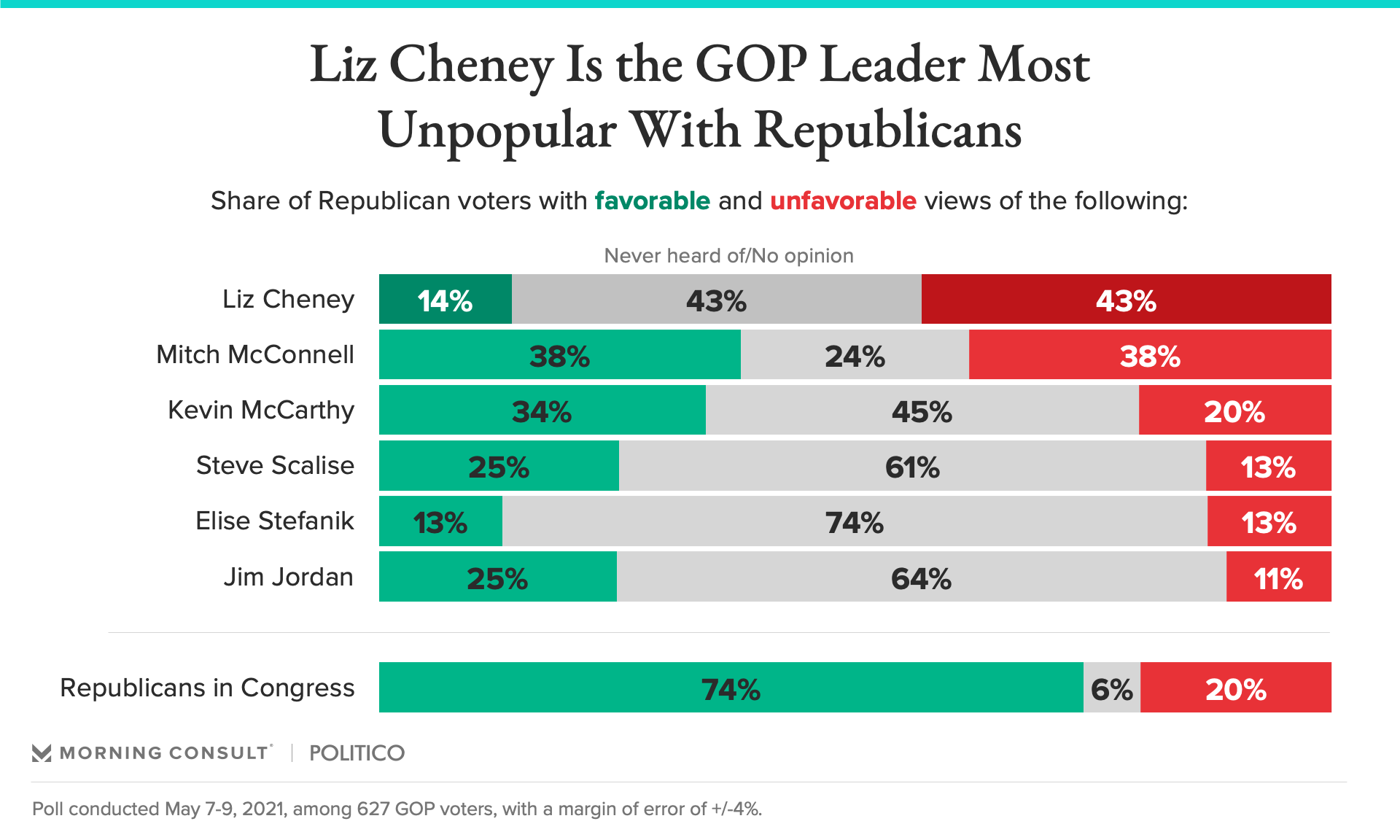 Among GOP voters, Cheney is by far the least popular Republican leader on Capitol Hill, followed by Senate Minority Leader Mitch McConnell (R-Ky.), who also drew Trump’s ire for vocal criticism of his role in the Jan. 6 riot but has recently improved his image among the party faithful after voting to acquit him in his second impeachment trial.

McCarthy and House Minority Whip Steve Scalise (R-La.) – both of whom objected to the certification of election results on Jan. 6 and have since aligned themselves closely with Trump after expressing misgivings about him in the aftermath of the Capitol riot – are on relatively even footing with Republican voters, while roughly three-quarters of their party’s backers don’t know what to think of Rep. Elise Stefanik (R-N.Y.), the favorite to replace Cheney at the leadership table.