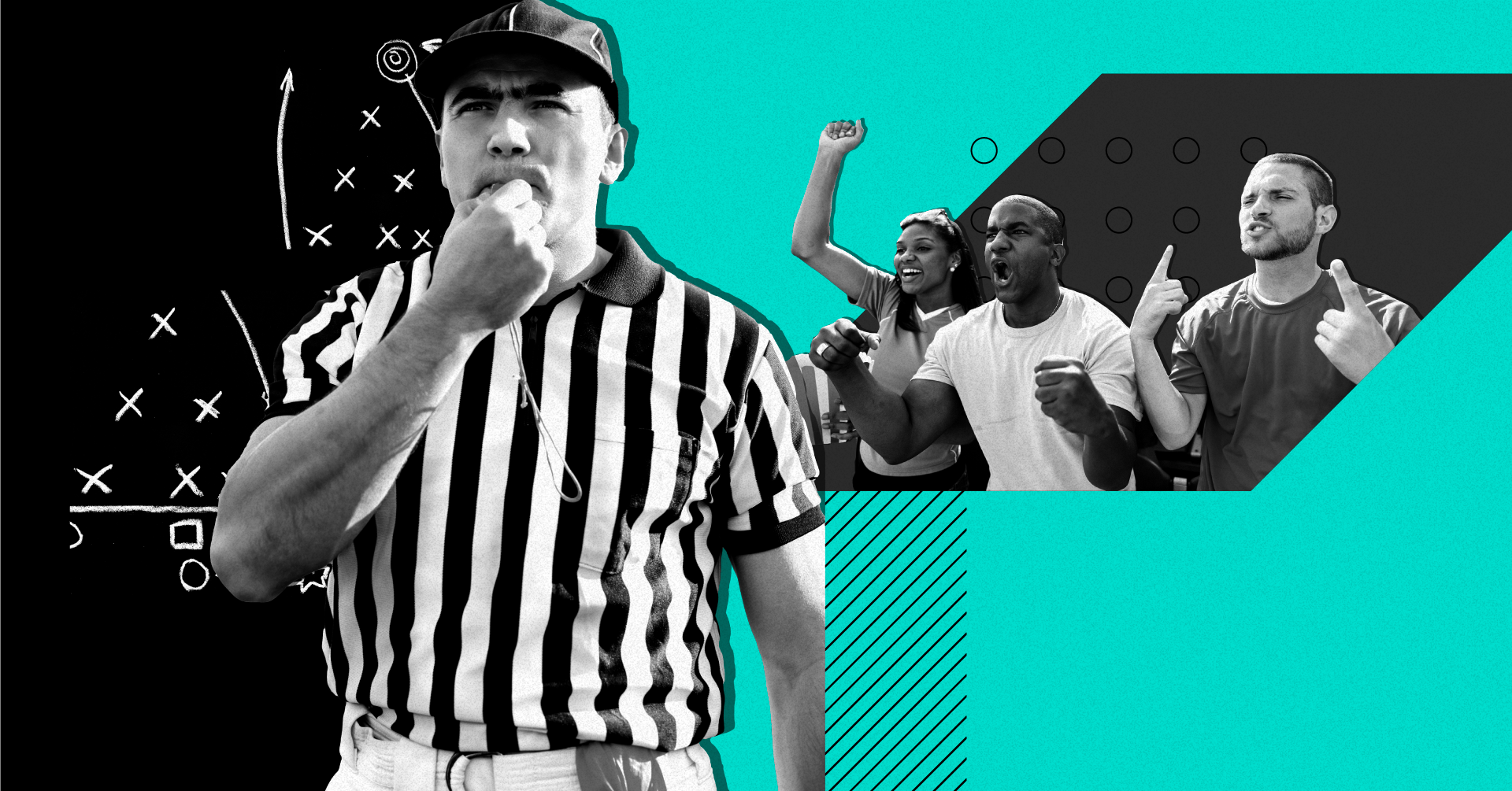 Most U.S. sports fans trust officials to get calls right more often than not across the major sports, according to new Morning Consult data. (Getty Images/Morning Consult Illustration by Vladimir Gorshkov)
By Alex Silverman

Being an official in major professional or college sports is among the industry’s most thankless jobs. Referees and umpires are rarely praised for making the right call, but draw boos from fans for every mistake and, in some cases, for making the correct call in favor of the opposing team.

When emotions aren’t running quite as high, however, most U.S. sports fans trust officials to get it right more often than not.

A Morning Consult poll conducted May 4-7 found that the majority of U.S. sports fans are at least somewhat confident in referees and umpires to make the correct calls, enforce the rules consistently and act impartially and with integrity. The survey asked about officiating in seven popular U.S. team sports — college basketball, college football, MLB, MLS, the NBA, the NFL and the NHL — and found only minute differences between the public’s confidence in each of them.

The seven sports included in the survey all scored similarly among sports fans. At least 81 percent of fans with an opinion of officials in each sport said they either “almost always” or “sometimes” make the correct calls. 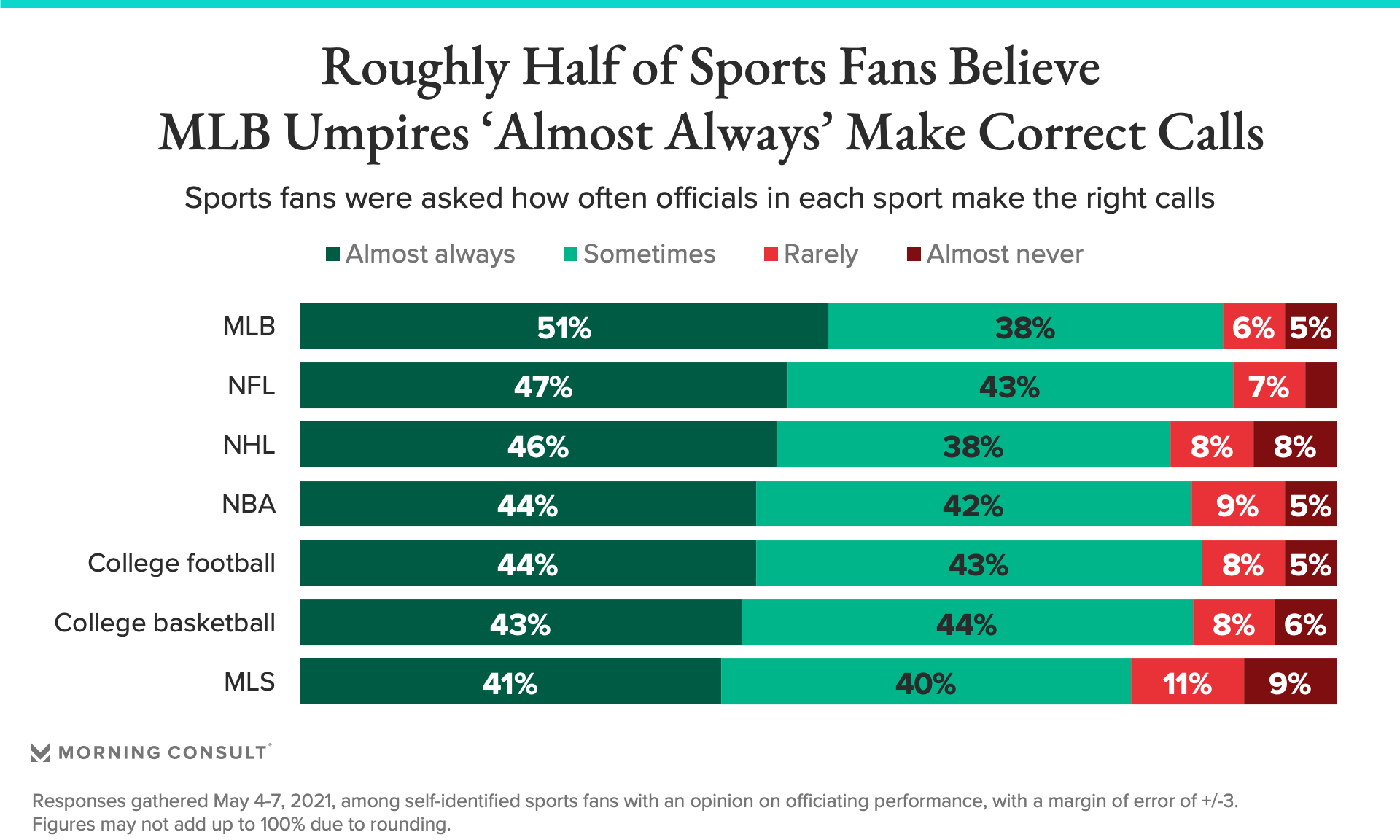 The 1,536 self-identified sports fans polled — as well as the subsamples of fans with an opinion on officiating performance for each sport — carry a margin of error of 3 percentage points. 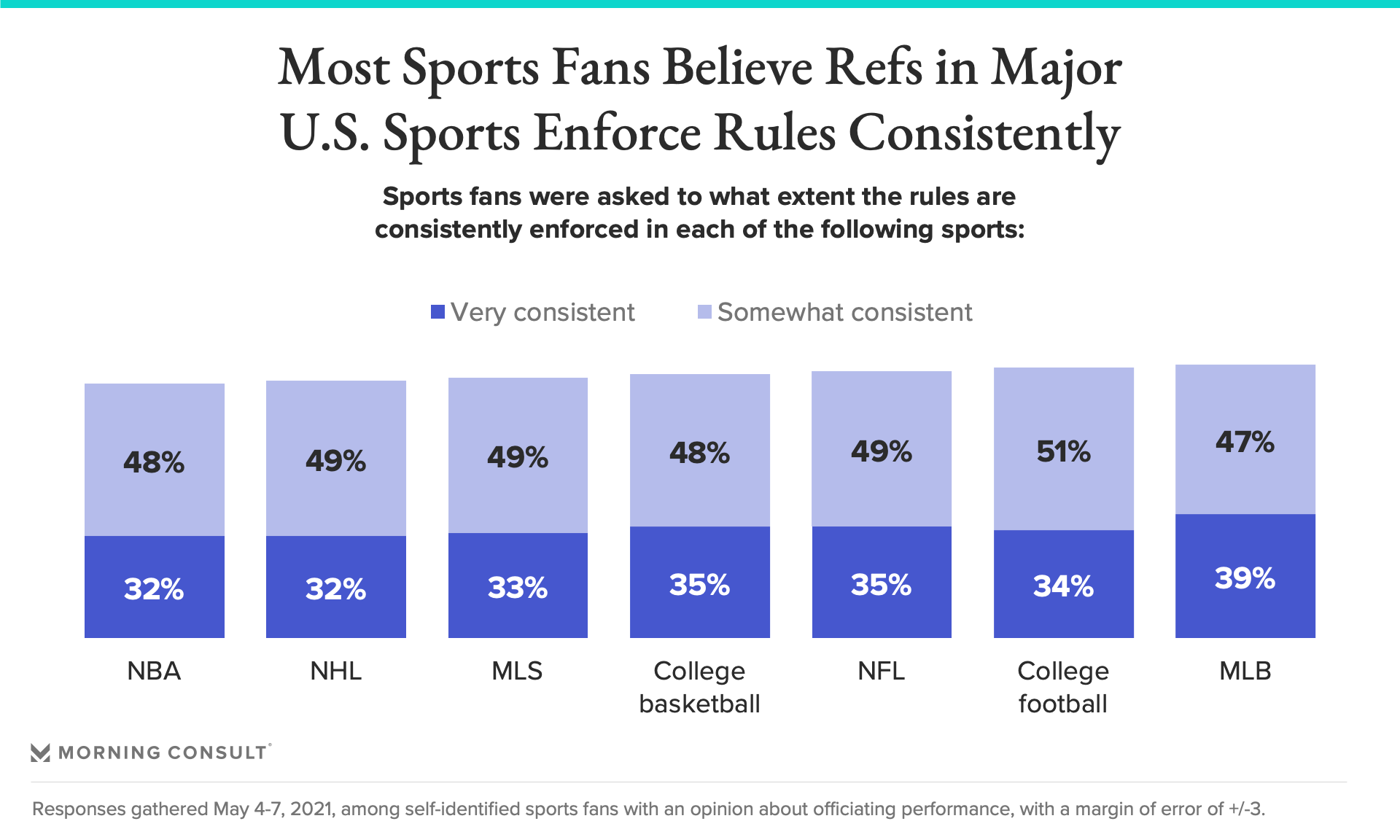 Similarly, the majority of sports fans said they are either “very” or “somewhat” confident that officials in each sport will act with integrity and impartiality. Eighty-one percent of sports fans with an opinion expressed confidence in the ethics of NHL officials, the highest mark in this category, including 32 percent who said they were “very” confident.

Generally speaking, those who identified as “avid” fans of a particular sport were more likely than the average sports fan to trust officials to make the correct calls, enforce the rules consistently and to do their jobs impartially.

Contrarily, individuals who said they bet on sports were more likely than the average sports fan to say that officials in each sport “rarely” or “almost never” make the right calls and less likely to express confidence in their consistency or integrity. About half of bettors, however, said the increased legalization of sports gambling has increased their confidence in the integrity and impartiality of officiating, compared with roughly 1 in 5 who said the opposite.

On the subject of video review, 87 percent of sports fans with an opinion said sports leagues generally use instant replay well to ensure the accuracy of calls, including 33 percent who said leagues use replay “very well.”

In general, sports fans were twice as likely to favor leagues using replay as often as possible to make more accurate calls than to say leagues should limit the use of replay to maintain the flow of a game.

Correction: A chart headline in a previous version of this story mischaracterized the share of sports fans who believe MLB umpires “almost always” make the right calls.