63% of NBA fans, including 79% of avid fans, say they approve of the qualification round for the final two seeds in each conference 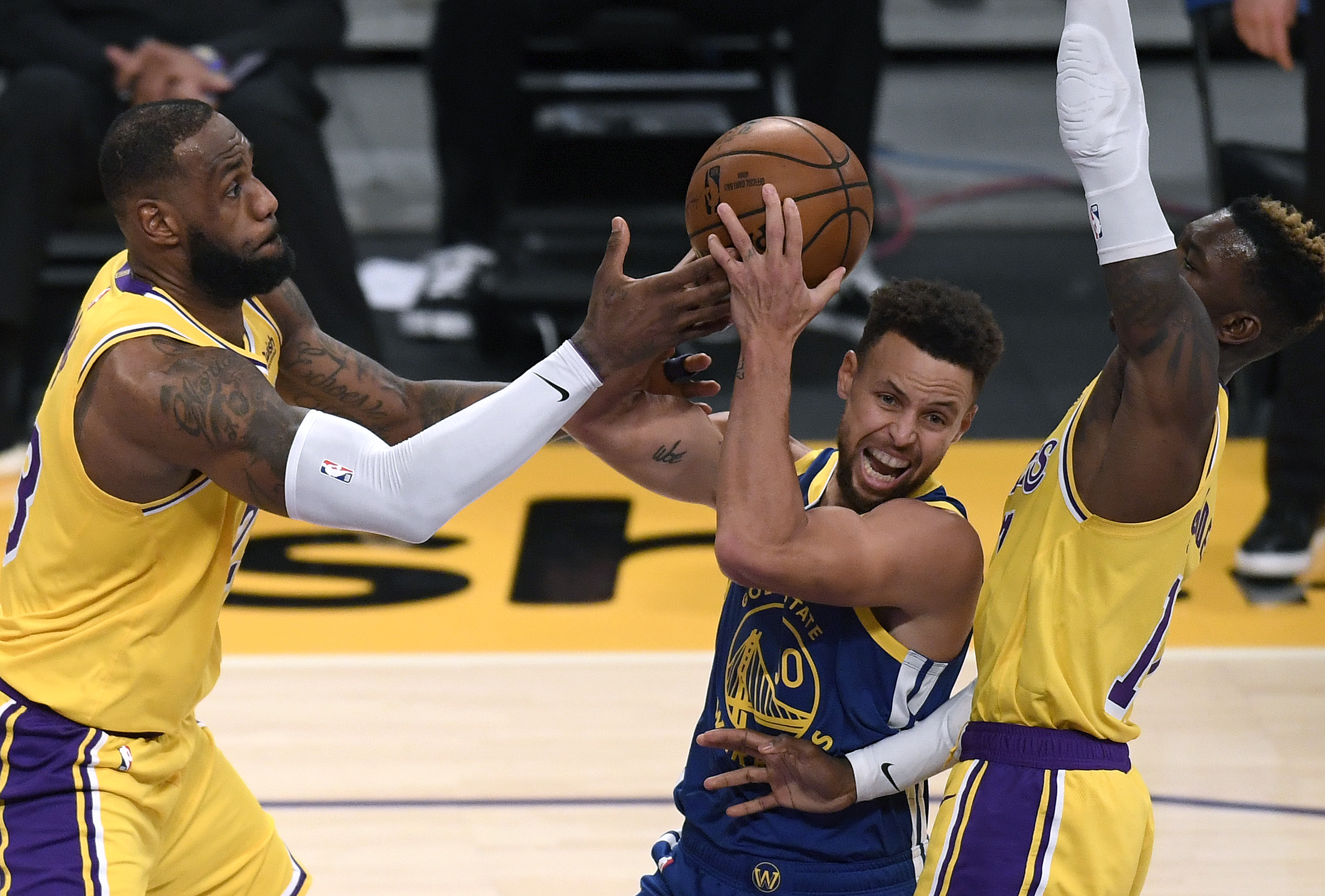 Stephen Curry of the Golden State Warriors drives between LeBron James and Dennis Schroder of the Los Angeles Lakers during a January game. The two teams will meet Thursday night in the NBA's new play-in tournament, which 63 percent of NBA fans said they supported as a new addition to the league's season, according to Morning Consult data. (Harry How/Getty Images)
By Alex Silverman

Los Angeles Lakers star LeBron James has made it clear he isn’t thrilled about participating in the NBA’s new play-in tournament, but polling shows NBA fans support the league’s plan to involve more teams in the push for the postseason.

A Morning Consult survey conducted last week found that 63 percent of self-identified NBA fans approved of the introduction of the play-in tournament, more than five times the share of NBA fans who disapproved of the break from tradition (12 percent). In addition, 79 percent of those who identified as “avid” NBA fans said they were in favor of the move. 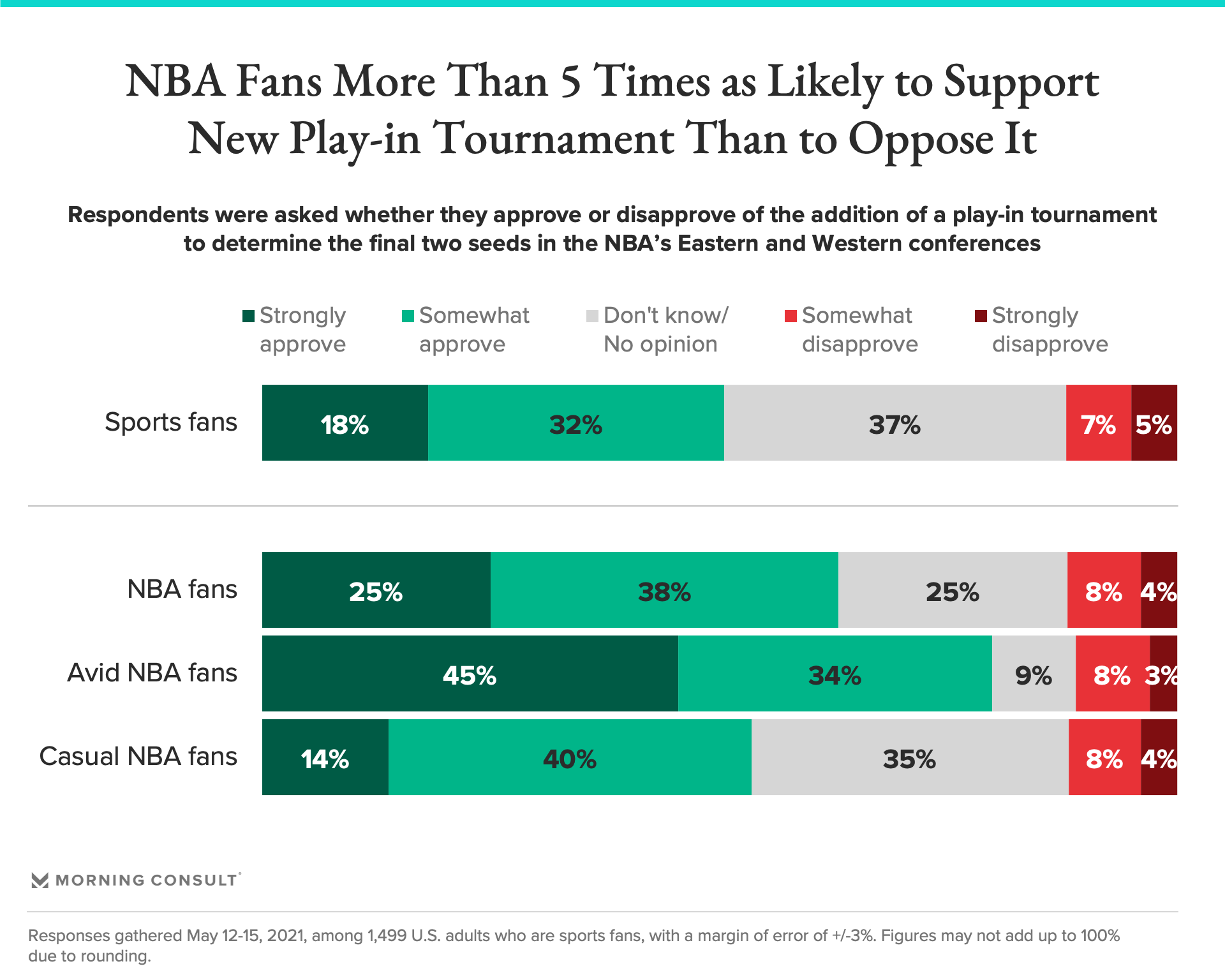 Unanimously approved by the NBA Board of Governors prior to this season, the play-in tournament gives the teams that finished the regular season ninth and 10th in each conference — who previously would have missed the playoffs — the opportunity to steal one of the final two postseason berths from the teams that finished seventh and eighth.

The play-in tournament, sponsored by insurance carrier State Farm, begins tonight with two Eastern Conference matchups on TNT: the No. 7 Boston Celtics vs. the No. 8 Washington Wizards and the No. 9 Indiana Pacers vs. the No. 10 Charlotte Hornets. The Western Conference action on ESPN begins Wednesday with the No. 7 Los Angeles Lakers vs. the No. 8 Golden State Warriors and the No. 9 Memphis Grizzlies against the No. 10 San Antonio Spurs.

The league and ESPN couldn’t have asked for a more compelling play-in matchup than Lakers-Warriors, which pits generational stars James, who recently said whoever created the play-in tournament “needs to be fired,” and Stephen Curry against each other. While not technically an elimination game, the winner will be guaranteed a playoff berth, while the loser will be forced into Friday’s elimination game.

Support for the play-in concept has increased since late 2019, when it was first reported that the league was discussing the idea with the NBA Players Association and its broadcast partners.

In a Morning Consult poll conducted in December 2019, 51 percent of NBA fans said they favored the establishment of a play-in competition, while 21 percent dissented. The play-in tournament was considerably more popular than the 30-team, in-season tournament proposed by Commissioner Adam Silver, an idea modeled after cup competitions in European soccer that has not come to fruition.

Last week’s survey, which was conducted before matchups were finalized, found that 34 percent of U.S. adults said they were interested in the play-in tournament, including 46 percent of sports fans and half of self-identified “casual” NBA fans. Sixty-four percent of all NBA fans and 85 percent of avid NBA fans expressed interest in the new competition.