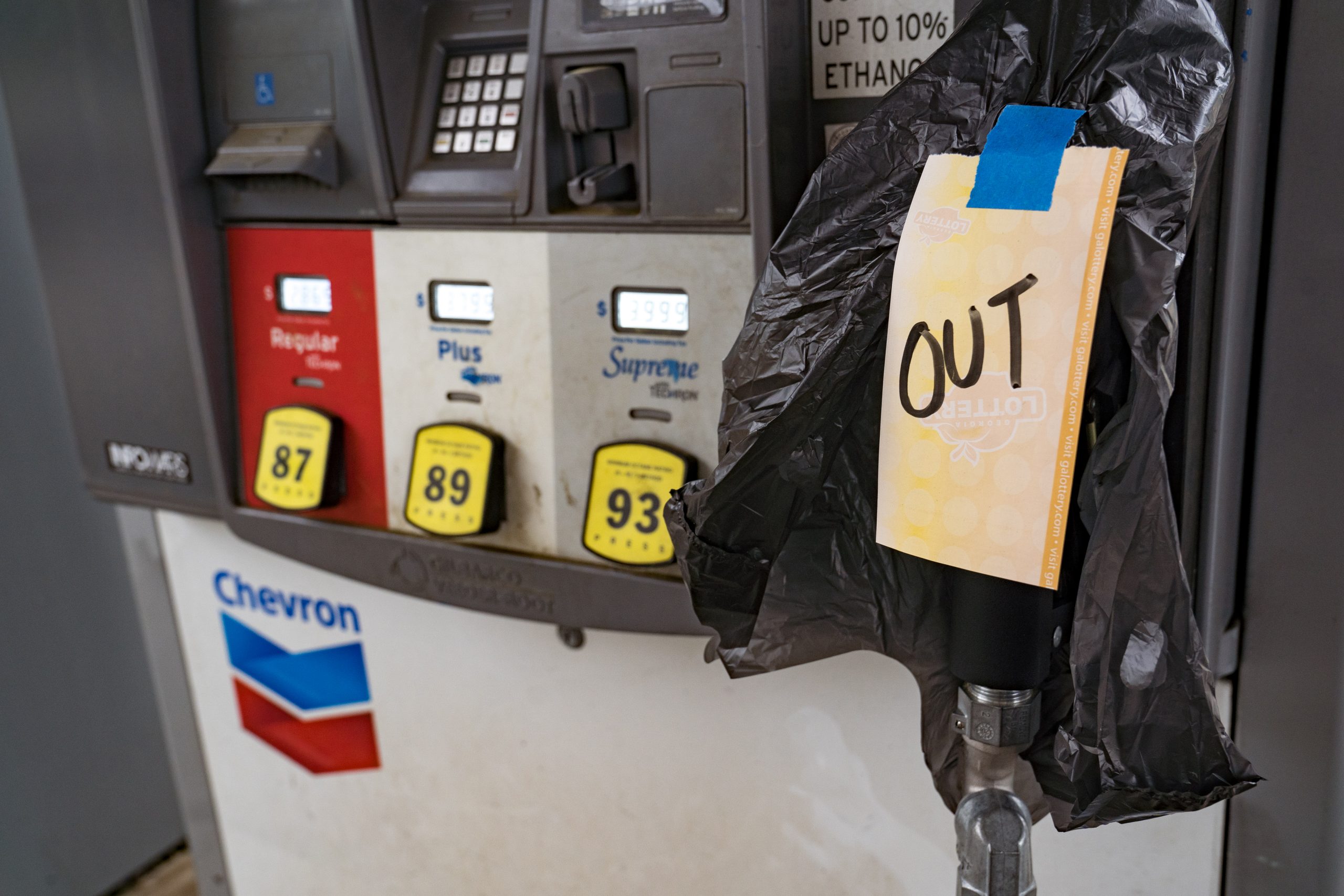 Gas stations begin to run out of gasoline after motorists rushed to fill up on May 11, 2021, in Atlanta, Ga. (Megan Varner/Getty Images)
By Lisa Martine Jenkins

While the ongoing gasoline shortage and price surges related to a cyberattack that caused a major pipeline’s shutdown have elicited Republican swipes at President Joe Biden, voters mostly do not think he is to blame. Larger shares say the hackers themselves, U.S. consumers and the Colonial Pipeline Co. bear more responsibility, according to new data from Morning Consult and Politico.

Conducted May 14-17, in the days after Colonial regained control of its operations and restarted delivering fuel to markets between Texas and New Jersey, the survey found that 55 percent of registered voters say the ransomware attack itself was “very responsible” for the shortage, while 16 percent say it was “somewhat responsible.”

And 38 percent said panic-buying gasoline by U.S. consumers in the days following the shutdown were very responsible for the shortage, with another 31 percent attributing some responsibility to those panic-buyers. Concentrated in the country’s southeastern and Mid-Atlantic states, the shortages continued even after Colonial restarted fuel deliveries, especially in North Carolina and Washington, D.C., both of which had the majority of their gas stations run out of fuel by the end of last weekend.

Meanwhile, Colonial — which has been dinged for its lack of sufficient cybersecurity, even advertising for someone to manage its cybersecurity operations in the period before and after the ransomware attack — was deemed very responsible by 24 percent of voters and somewhat responsible by another 35 percent. 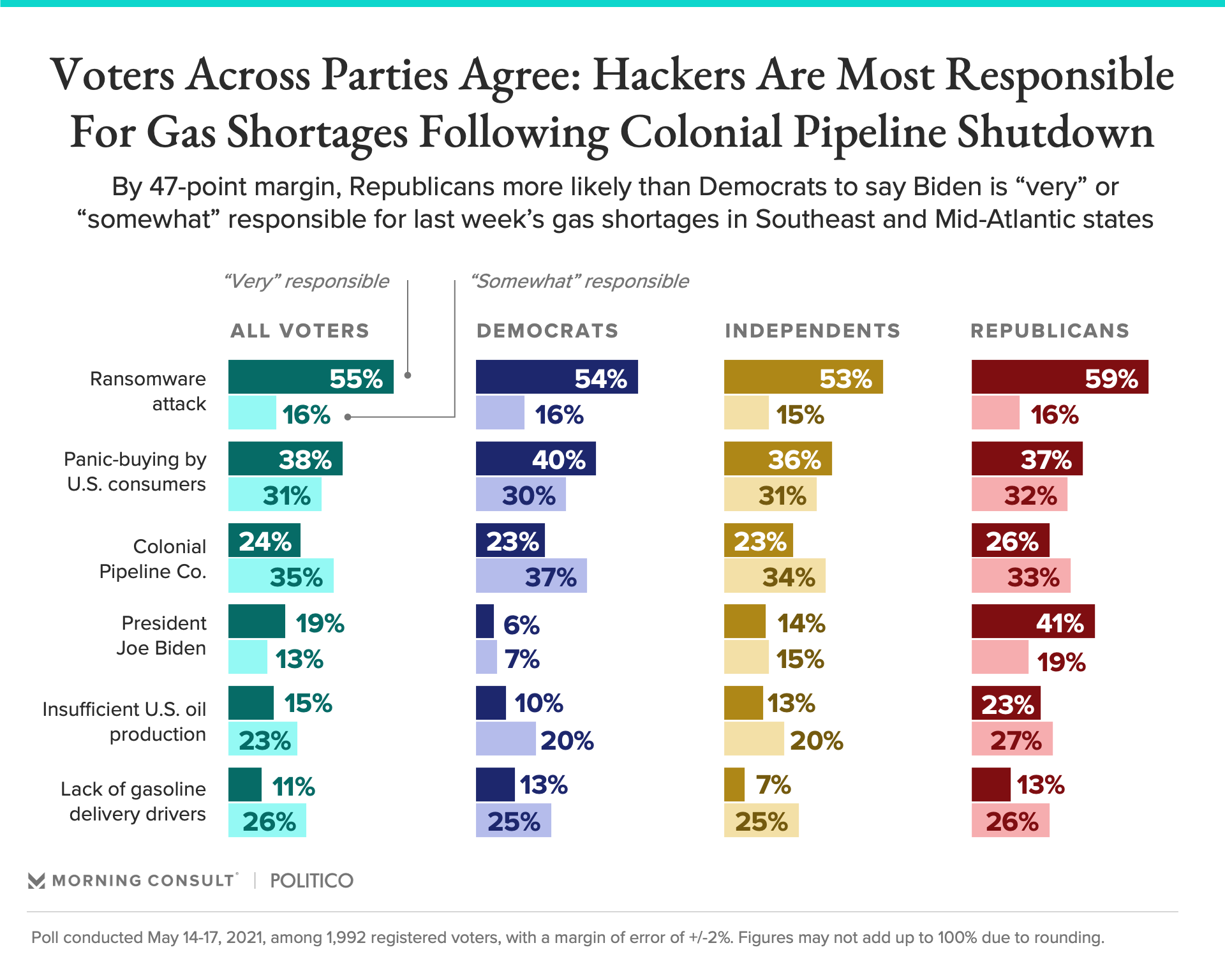 On these top three options, voters of all parties were broadly in agreement, with Democrats and Republicans differing in their opinions by only up to 5 percentage points (just outside the 4-point margin of error for the demographics).

However, the question of Biden’s responsibility elicited a gulf of disagreement, with 13 percent of Democrats saying he is very or somewhat responsible and 60 percent of Republicans saying the same, perhaps illustrating that the surge of conservative websites and commentators actively casting blame on the president have resonated among partisans. Among all voters, the share who blamed Biden was 32 percent.

And whether or not “insufficient U.S. oil production” was to blame was also divisive, with 30 percent of Democrats and 50 percent of Republicans saying that possibility bore some responsibility. In actuality, U.S. oil production decreased slightly in the past year due largely to the pandemic-related sudden drop in demand, though it is still higher than it has been historically.

Just 11 percent said a lack of truck drivers to deliver gasoline was very responsible and 26 percent said that bore some responsibility, despite some reports that pandemic-related job cuts compounded the difficulties getting gasoline to stations. 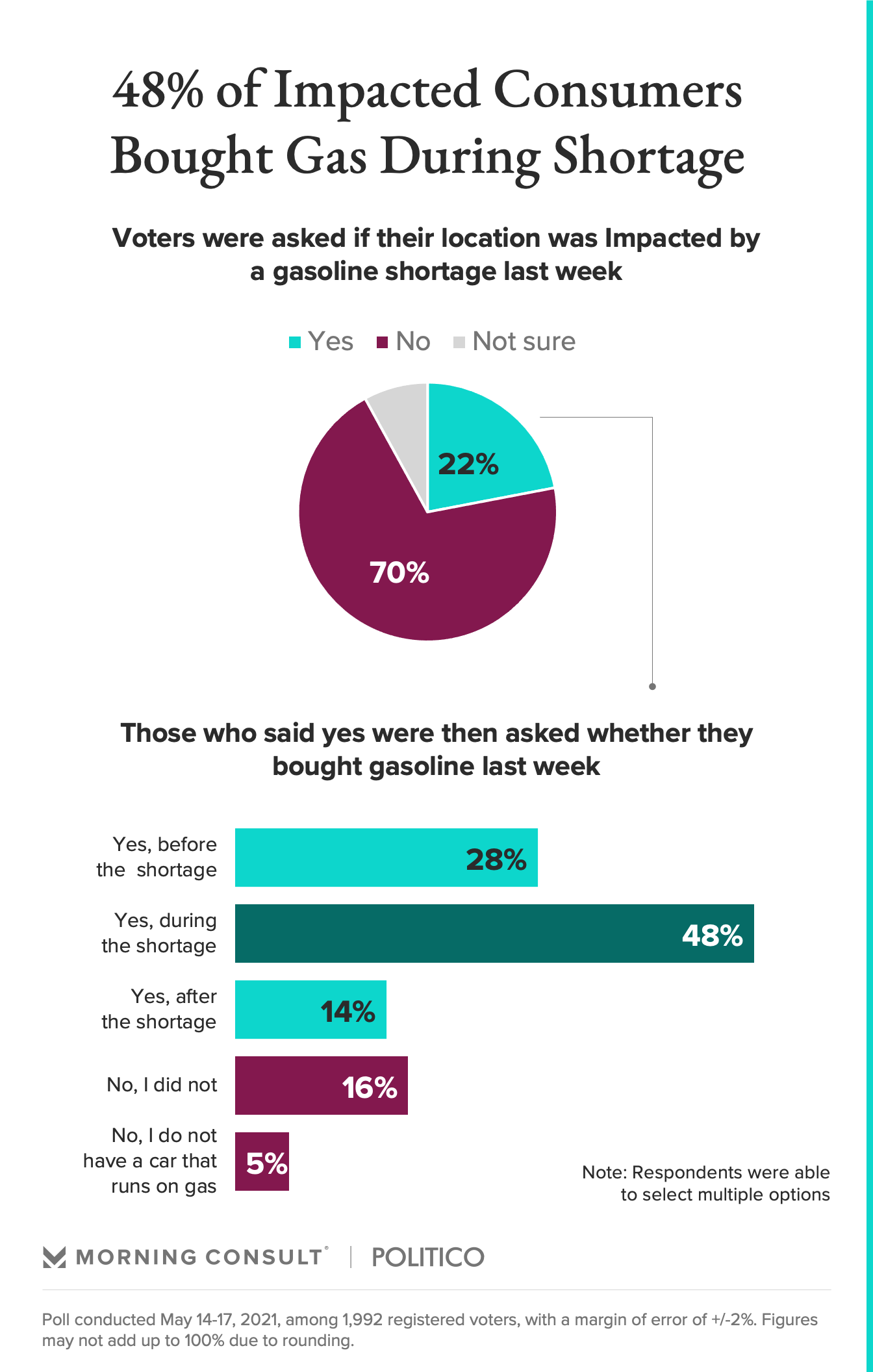 The survey of 1,992 registered voters, which has a 2-point margin of error, also found that 22 percent of voters were located in a place that experienced a gas shortage last week.

Roughly half (48 percent) of voters living in impacted areas said they purchased gas while the shortages were in full swing, in some cases braving long lines and stations that had run low on or even out of gasoline completely. Twenty-one percent said they did not get gas at all last week, which includes 5 percent who do not have a vehicle that runs on gasoline.

And while 24 percent of impacted respondents said they refilled their tank unnecessarily and 16 percent said they filled up a container with fuel as a consequence of the gas shortage, so-called panic-buying was not the only response to the crisis. Others used their vehicles less than they would have normally (52 percent), used alternative methods of transportation (19 percent) and canceled plans (26 percent). Thirty-four percent said they drove to multiple locations to find gas.

The subsample of voters impacted by the gas shortages carries a 5-point margin of error.

Related: Electrifying All New Vehicles Sales by 2035 Can Be Done, Would Save U.S. Consumers $2.7 Trillion by 2050, Report Finds
Electric Vehicles Natural Gas Pipelines Oil and Gas