Vaccinated U.S. adults show across-the-board uptick in comfort since CDC announced that they don’t need masks in most places 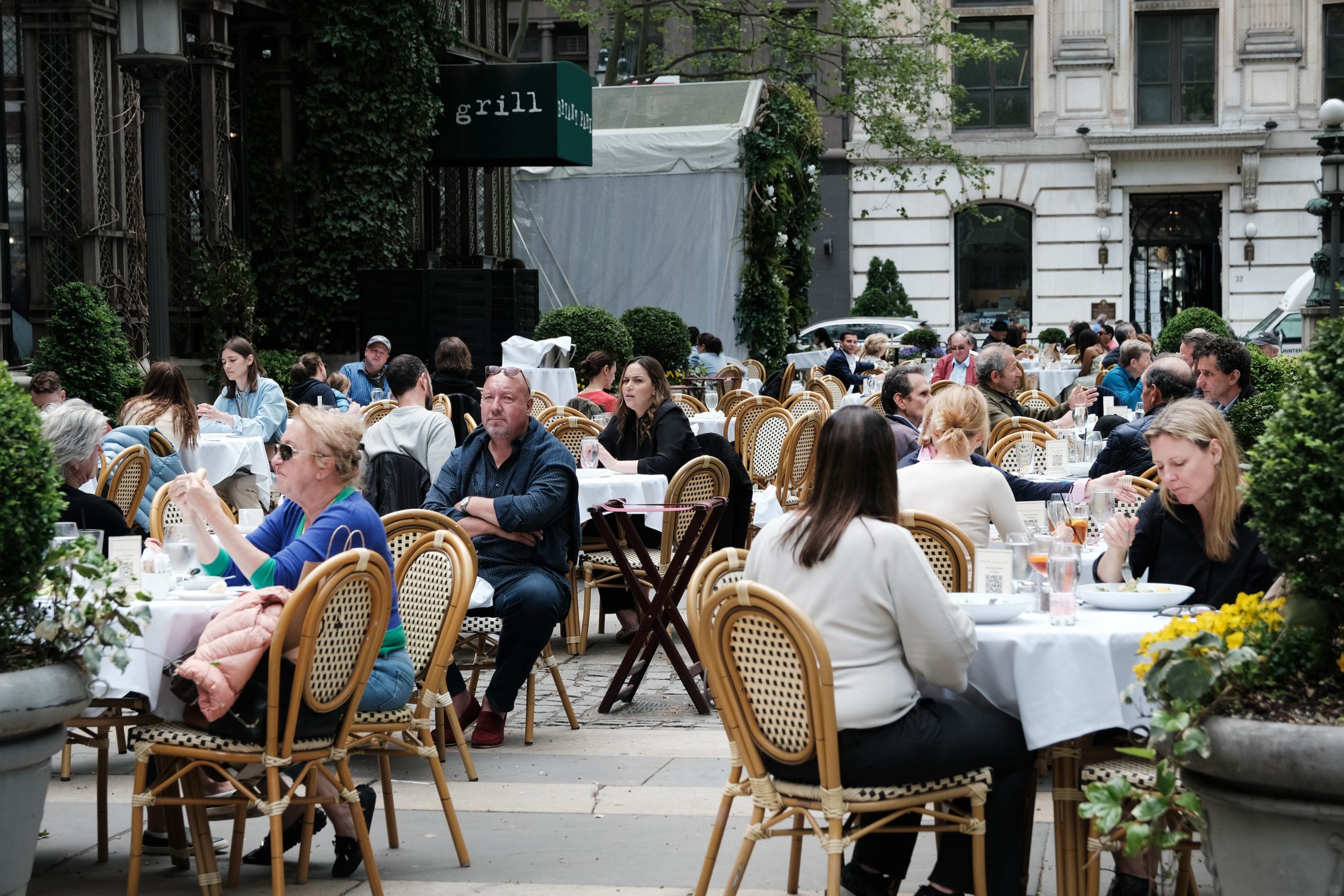 People eat outside at a New York City restaurant on May 4. Sixty-seven percent of vaccinated Americans said they feel comfortable dining out, according to Morning Consult's latest Return to Normal tracking data. (Spencer Platt/Getty Images)
By Cameron Easley

The Centers for Disease Control and Prevention’s easing of guidance for mask usage among Americans who have been vaccinated for COVID-19 appears to have struck a chord with a segment of the country’s inoculated population, new Morning Consult polling shows, potentially providing the U.S. economy with a proverbial shot in the arm.

In the latest weekly Return to Normal trend data gathered May 13-15, an average of 45 percent of vaccinated U.S. adults said they’d be “very” or “somewhat” comfortable doing a broad range of 43 activities — from going to the movies or a party to going on a cruise, attending a work conference or flying on an airplane — up 6 percentage points from averages collected in a May 6-8 survey ahead of the CDC’s May 13 announcement, which drew criticism from some epidemiologists and other public health professionals.

As Morning Consult economist John Leer noted last week, increasing comfort among the vaccinated population will be a key driver in the country’s economic recovery. The latest findings suggest that the new guidance on masking could help businesses pick up the pace. 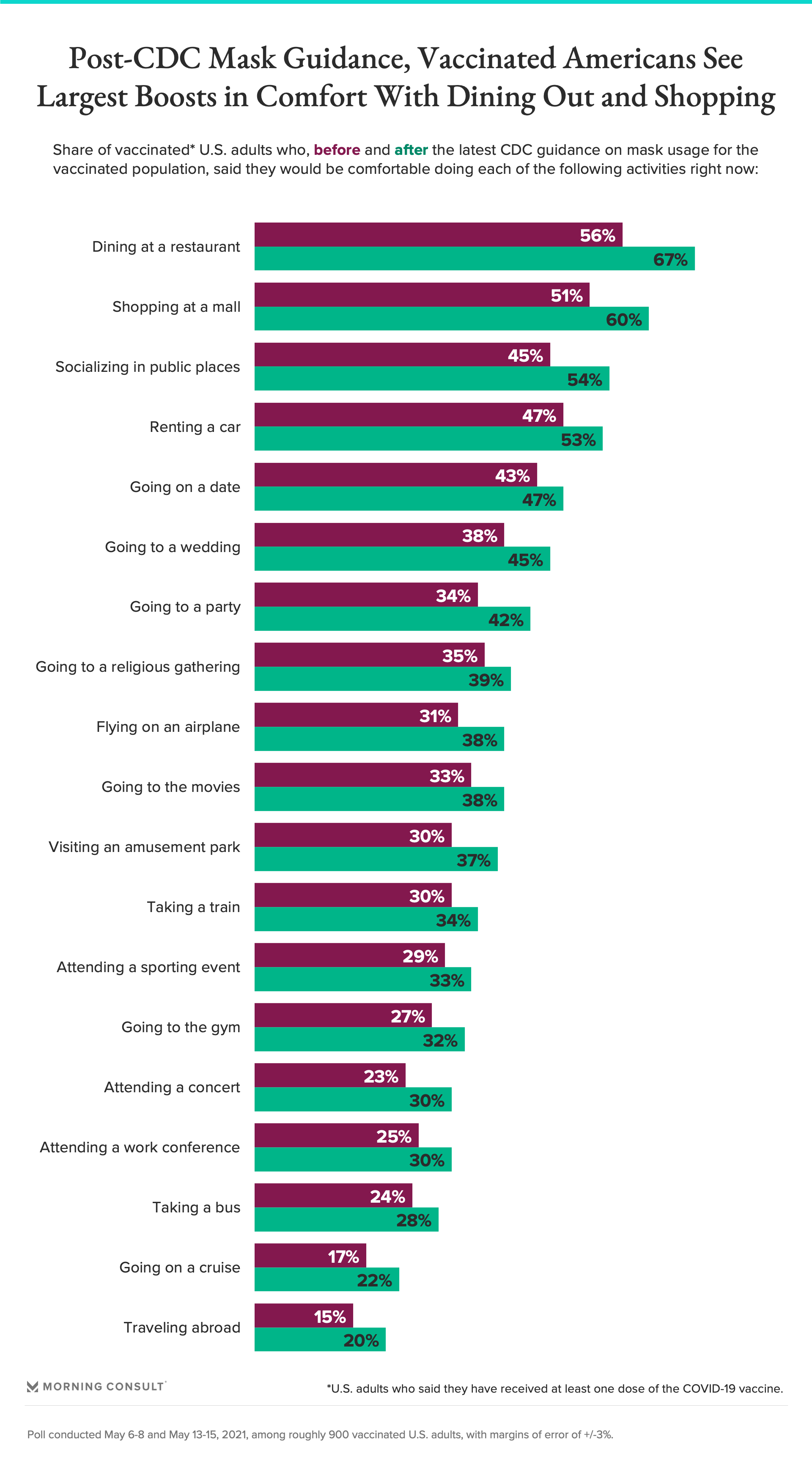 The largest week-to-week jumps in comfort were measured for activities toward which vaccinated Americans had previously expressed less reticence. The share of vaccinated Americans who said they would feel comfortable dining at a restaurant increased by 11 percentage points, to 67 percent, while the share who said the same of shopping at a mall and socializing in public places saw 9-point upticks, to 60 percent and 54 percent, respectively.

Each of the past two Return to Normal tracking polls surveyed roughly 900 U.S. adults who said they’d received at least one dose of a COVID-19 vaccine, with 3-point margins of error on those responses. The broader polls of roughly 2,200 U.S. adults have an overall 2-point margin of error. 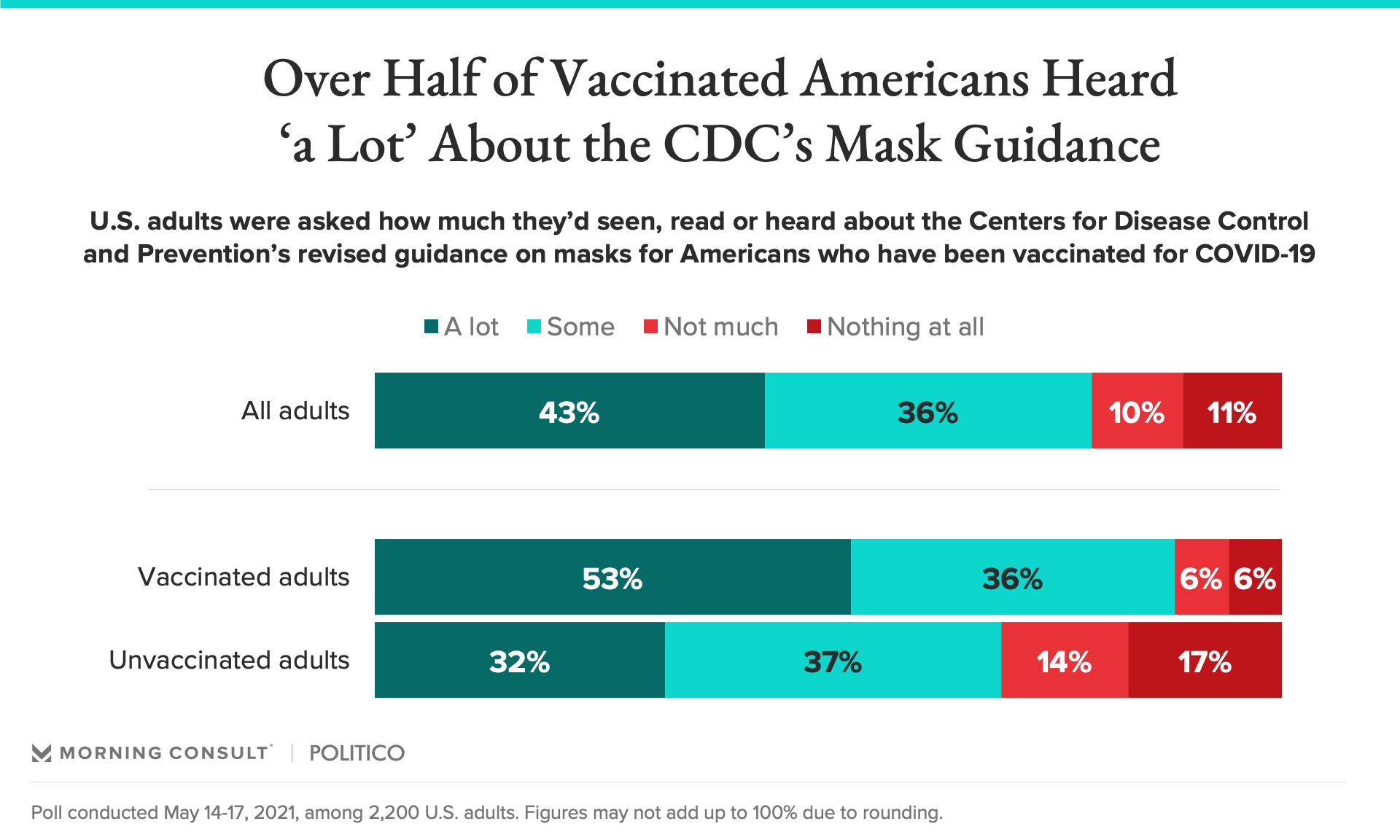 The CDC’s announcement that inoculated Americans no longer need to wear masks in most circumstances came as a surprise to most observers, and the country’s vaccinated population was paying close attention.

A Morning Consult/Politico poll conducted May 14-17 found that 53 percent of vaccinated U.S. adults said they’d seen, read or heard “a lot” about the decision, compared with 32 percent of unvaccinated respondents who said the same. The survey of 2,200 U.S. adults has a 2-point margin of error. 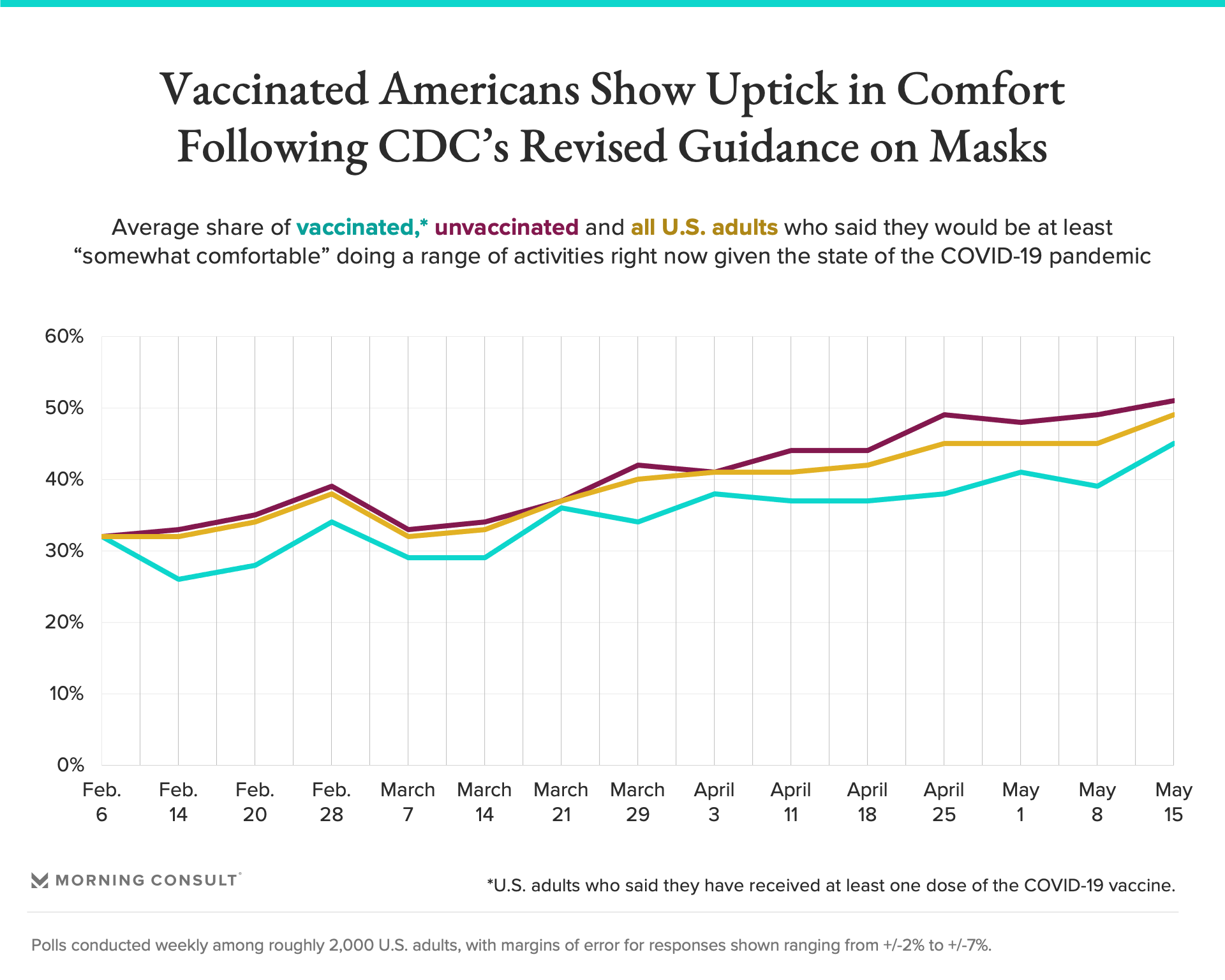 Putting the impact of the announcement into broader context, it appears to have fueled the largest weekly shift in comfort among vaccinated Americans since mid-March, when the average share of comfort toward the broad array of activities jumped to 36 percent from 29 percent.

The past week’s similarly sized 6-point shift also coincided with a 2-point bump in average comfort among the country’s unvaccinated population, over half of whom now — for the first time in Morning Consult tracking — said they feel at least “somewhat” comfortable carrying out a variety of leisure and lifestyle activities.

An average of 49 percent of all U.S. adults — another record high — said they were comfortable engaging in those activities, up from 45 percent last week and up from 32 percent in early February.

Related: Many Vaccinated Americans Are Still Uncomfortable Returning to Public Activities. The U.S. Economy Needs Them

As comfort increases, concern about the virus heads in the opposite direction. The latest tracking found 41 percent of U.S. adults said they were “very concerned” about the outbreak, its lowest mark since March 2020 and down 5 points from the previous week.

Similarly, the share of voters who are more concerned about the economic impact of the pandemic than its threat to public health also reached its highest level since Morning Consult began tracking the question in March 2020.

And while a number of public health experts criticized the CDC’s seemingly abrupt decision as too quick and messily processed, broad public approval for the agency held steady from the previous week, with 64 percent of voters backing its handling of the virus.