Consumer Confidence Falls Despite Success in Fighting the Pandemic

Increasing vaccinations, falling case counts have left the economy to speak for itself, and consumers don’t like what they’re hearing 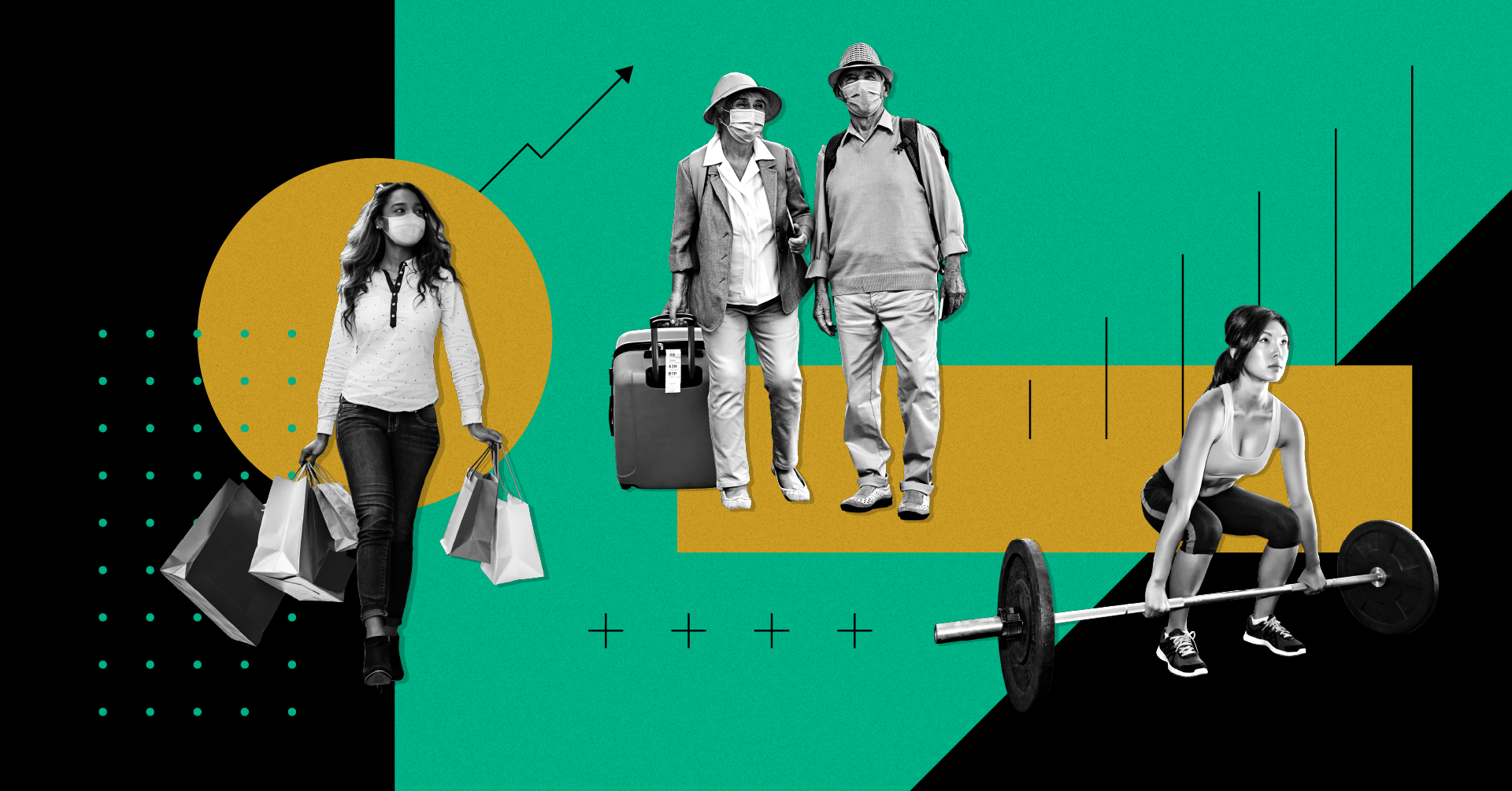 Despite unprecedented direct financial support to millions of Americans and significant progress in the public health battle against the coronavirus, U.S. consumers have started to sour on the economy. Morning Consult’s U.S. Index of Consumer Sentiment fell from 102.40 on May 3 to 98.64 on May 14, before moderately rebounding to 99.56 as of May 23. The decrease in consumer confidence in May marks the end of four months of consistent increases, calling into question the speed and strength of the economic recovery. 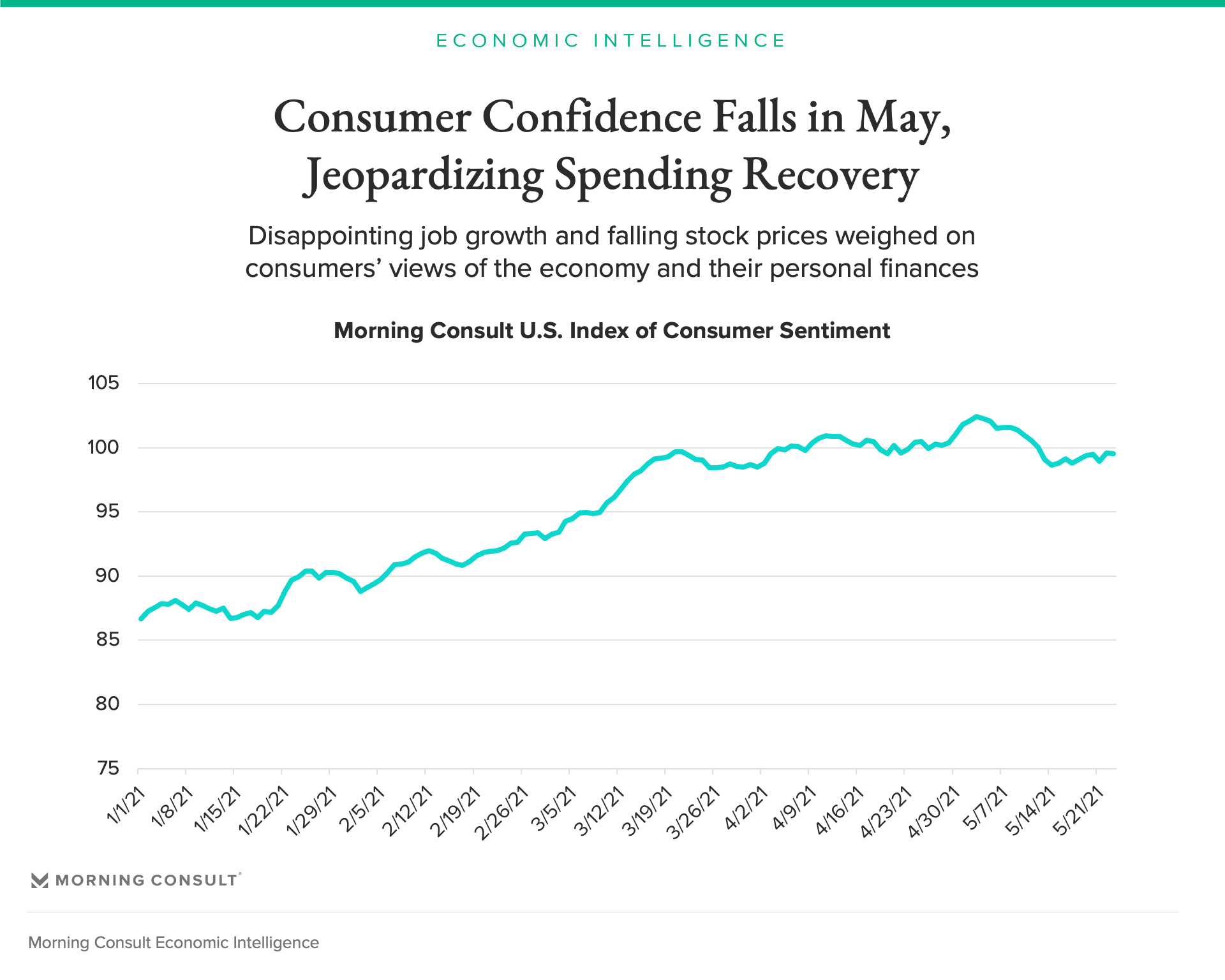 This analysis describes the current drivers of U.S. consumer confidence, reconciling recent positive developments in the fight against the virus with consumers’ growing economic pessimism. How can consumer confidence fall at the same time as consumers feel more comfortable returning to normal than they have in the past year?

While these developments may seem contradictory, they provide different signals regarding the strength of U.S. consumers. Recent decreases in consumer confidence reflect consumers’ growing awareness of the serious financial and economic issues they are likely to face even after the economy fully reopens.

Second, even though vaccinations have driven down the average number of new coronavirus cases in the United States, consumers do not improve their economic outlooks based on falling case counts. Morning Consult’s global, daily consumer confidence data in November 2020 identified the asymmetric relationship between the coronavirus and consumer confidence: increases in new cases or deaths exerts downward pressure on confidence, but decreases in new cases or deaths does not drive an increase in confidence.

The recent decrease in U.S. consumer confidence in May is consistent with these prior findings that argued that additional vaccinations after April would not drive further increases in consumer confidence. With the virus’ spread increasingly under control, consumers are able to turn their attention away from the pandemic and back to the fundamentals of the economy when making their financial and economic assessments.

Related: The Jobs Numbers Were Disappointing. Here’s Why

The U.S. economy slowed in April, and consumers noticed

The second and third stimulus checks provided much needed boosts to households’ finances from January to April, translating into immediate increases in consumer confidence. However, these checks were never intended to act as permanent replacements for income from jobs. Rather, they were supposed to provide workers a lifeline or bridge, allowing them to pay their bills until the economy reopened and jobs became available. Unfortunately, those jobs have yet to materialize. The April jobs report was particularly disappointing, with adults across the income spectrum continuing to experience elevated levels of pay and income losses during the month.

Over two months after the passage of the American Rescue Plan, the impact of the third round of stimulus checks on personal finances is starting to wear off. A prior analysis estimated that $1,400 checks would allow 22.6 million adults to pay their expenses for at least 4.5 months without incurring additional debt or eating further into their depleted savings, assuming that they maintain income from work and unemployment benefits. As of May 24, half of the 4.5 months has already expired, leaving millions increasingly uncertain about their future financial prospects.

Lastly, recent volatility in stock prices also contributed to the decrease in consumer confidence. Although stock prices remain elevated by historical standards, growth in the S&P 500 slowed in April, and the index contracted in May following the disappointing April jobs report. Previous research shows the strong correlation between the S&P 500 and Morning Consult’s U.S. ICS, and this most recent period of stock market volatility is no exception.

Sustainability of economic recovery hangs in the balance

Even as more American consumers are inoculated and grow increasingly willing to engage in pre-pandemic activities such as going to the movies, decreases in their assessment of their finances and the economic condition of the country as a whole jeopardize the strength and sustainability of the economic recovery. Regardless of their willingness to engage in these activities, consumers need jobs to provide them with incomes to spend on pre-pandemic activities. The second and third rounds of stimulus provided millions of Americans with a financial bridge until July to partially cover their expenses while waiting for the economy to create millions of jobs. Consumers are closely following the rate of job growth to determine if the bridge was long enough.