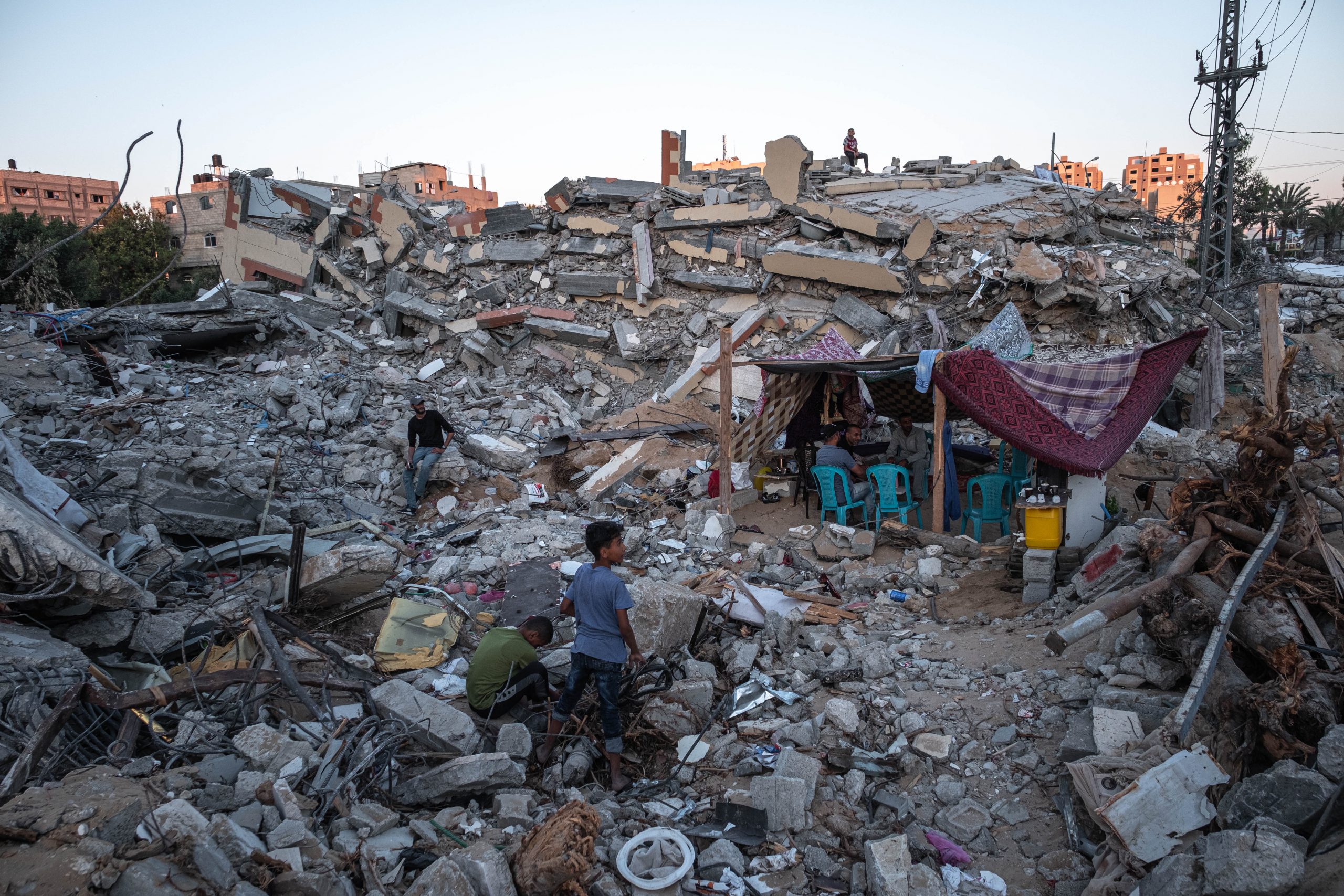 Palestinians resume life Monday amid the rubble of their destroyed homes in Beit Hanoun, Gaza. Polling conducted in the wake of a a U.S.-backed cease-fire between Israel and Hamas militants finds Americans are divided over President Joe Biden's handling of the conflict. (Fatima Shbair/Getty Images)
By Eli Yokley

President Joe Biden’s handling of the Israeli-Palestinian conflict, which broke out into a hot war this month before the two sides agreed to a cease-fire, is a divisive issue for the U.S. electorate, with slightly more voters disapproving than approving of how he’s tackled a dispute that has bedeviled American presidents for decades.

According to a new Morning Consult/Politico poll, 41 percent of voters disapprove of Biden’s approach to the conflict, while 36 percent approve. Though nearly a quarter of minds aren’t made up on the issue, the figures still represent one of his worst showings on a range of 15 issues, driven by strong opposition among Republicans and comparatively weaker backing from Democrats. 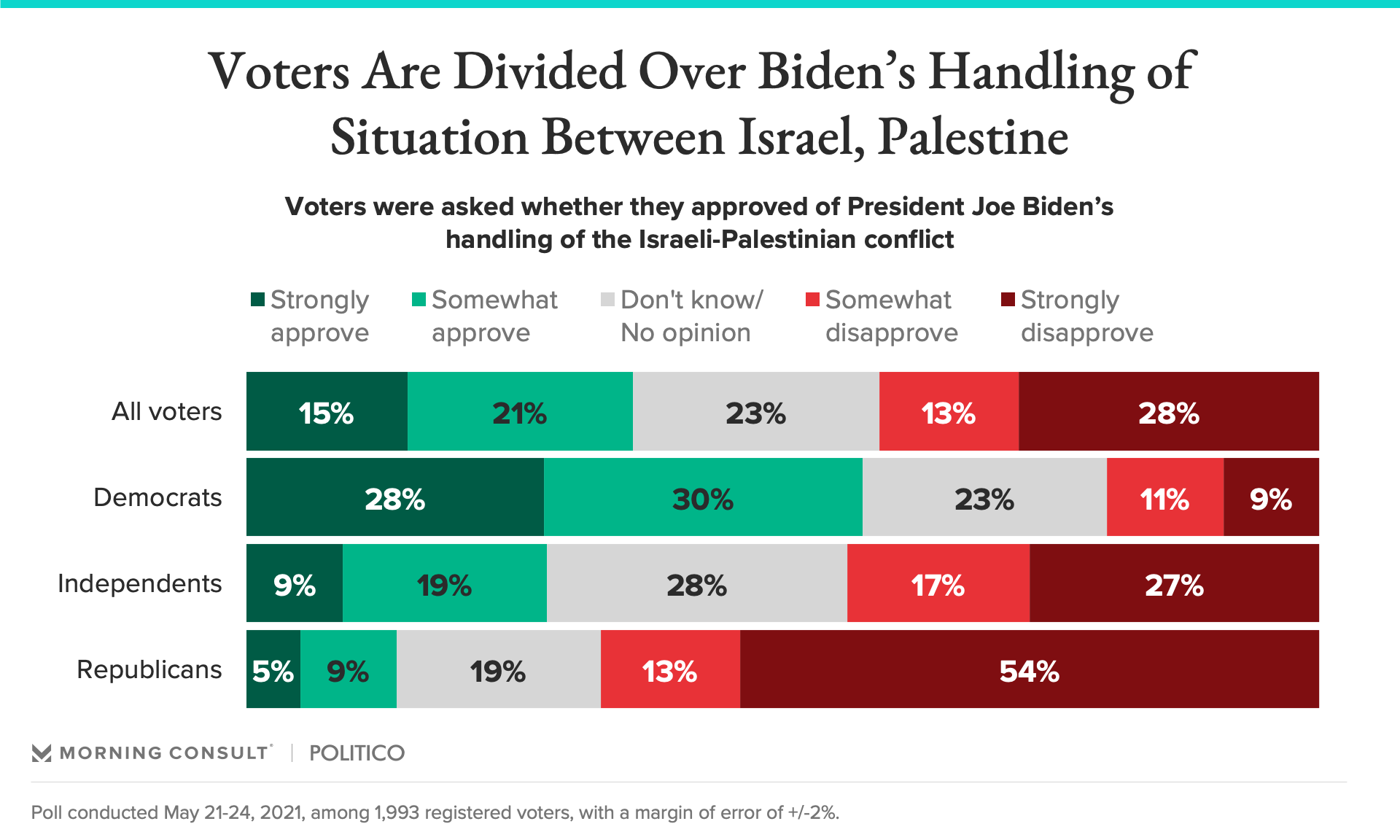 Fifty-four percent of GOP voters “strongly” disapproved of Biden’s handling of the conflict, roughly twice the 28 percent of Democratic voters who strongly approved of it.

As the fighting between the Israel military and Hamas militants intensified earlier this month, Biden eschewed the bully pulpit approach, instead leaning on Israeli Prime Minister Benjamin Netanyahu in private phone calls to find a way to end the fighting as the White House supported Egypt’s efforts to negotiate a cease-fire. The news of the skirmish dominated headlines, and by the height of the fighting, 72 percent of Americans reported having seen, read or heard at least some about escalating violence, according to a May 14-17 survey.

Voters were less likely to report hearing about the cease-fire than they were to have been aware of the initial fighting: In the latest poll, 59 percent said they had heard at least something about the ceasefire, including 65 percent of Democrats and 54 percent of Republicans.

The fighting at least temporarily elevated foreign policy issues to the top of the agenda in Washington. Biden is well-versed in the realm given his background as vice president and chairman of the Senate Foreign Relations Committee, but foreign policy is likely to gain more prominence in the coming weeks as negotiators work to revive a nuclear agreement with Iran and Biden heads on his first overseas trip as commander-in-chief – and polling suggests the subject is an area of relative political weakness for the president. 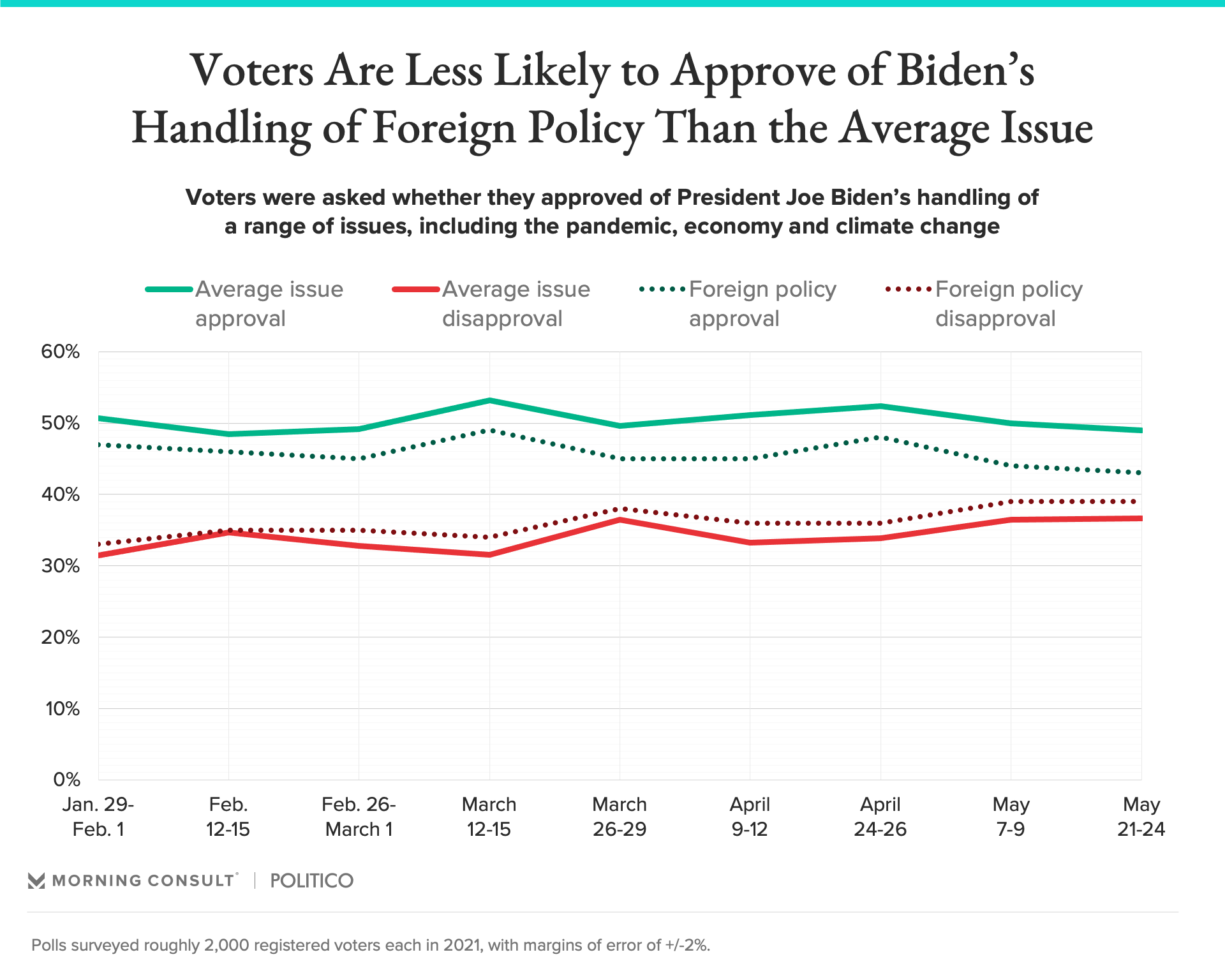 While an average of 49 percent of voters approve of Biden’s handling of 14 issues, the latest survey found that 43 percent of voters approve of how Biden has tackled foreign policy – slightly higher than the 40 percent who approve of his approach to gun policy or immigration but far less than the 62 percent who back his handling of the COVID-19 pandemic. Thirty-nine percent disapprove of how Biden’s handled foreign policy and 18 percent are unsure.

Support for Biden’s handling of international issues is driven by Democrats, 72 percent of whom approve, though just 37 percent who do so “strongly.” A majority of GOP voters (57 percent) “strongly” disapprove of his work on foreign policy.