Purchasing consideration was highest ahead of the release of ‘Godzilla vs. Kong’ 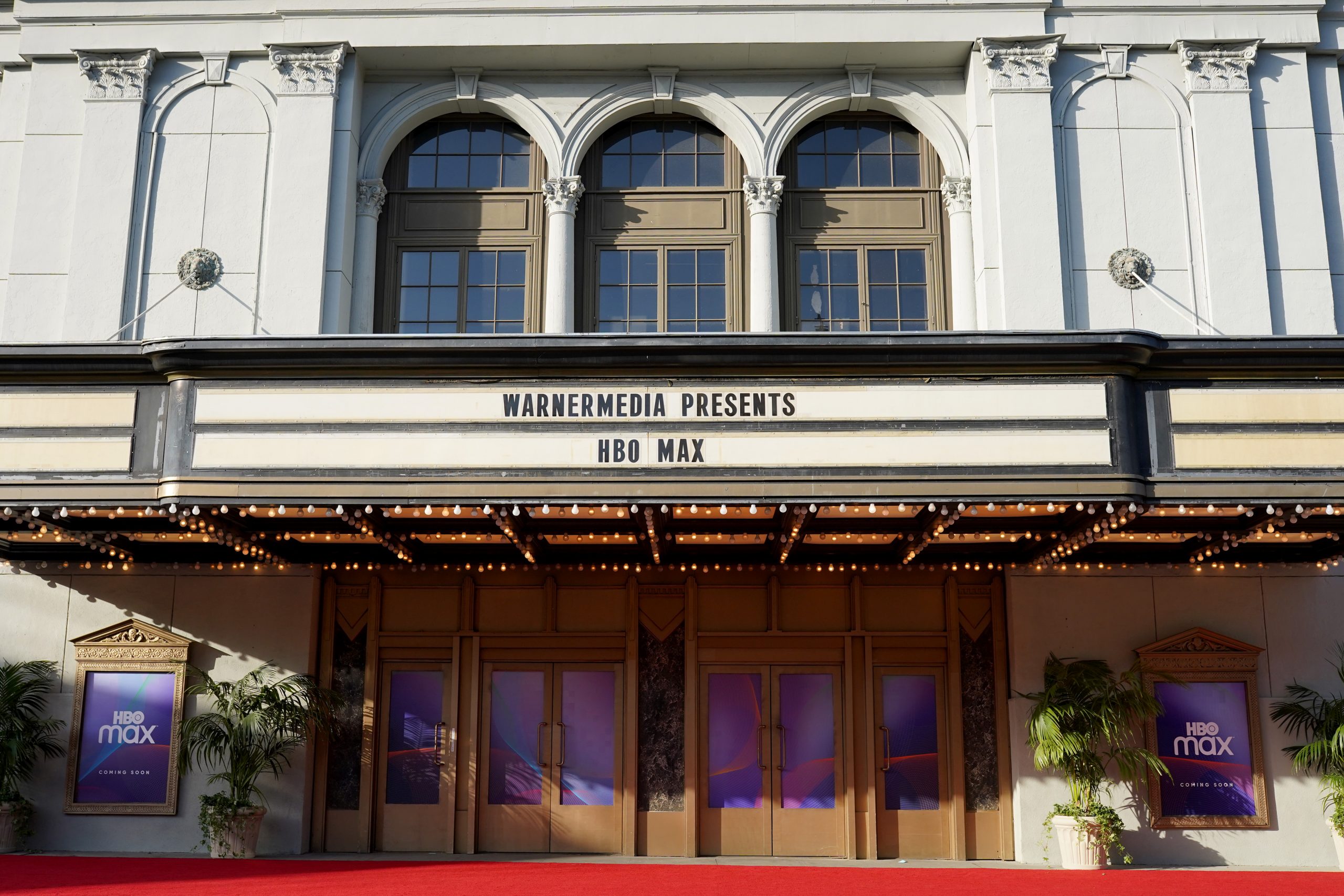 A shot of the HBO Max WarnerMedia Investor Day Presentation at Warner Bros. Studios held in Burbank, Calif., in October 2019. Day-and-date releases have become a unique part of HBO Max's subscriber pitch, and Morning Consult trend data indicates they are having a modest impact on growth. (Presley Ann/Getty Images for WarnerMedia)
By Sarah Shevenock

When “The Conjuring: The Devil Made Me Do It” premieres Friday on HBO Max, it will be the eighth Warner Bros. title to debut day-and-date on the service, following in the wake of “Wonder Woman 1984” and “Godzilla vs. Kong.”

While this distribution strategy of simultaneously premiering films in the theater and on the streamer helped boost audiences for brick-and-mortar cinemas during a pandemic, it also likely helped draw a few consumers to HBO Max, according to Morning Consult Brand Intelligence trend data, which shows that these films have had a modest impact on consumers’ decision to subscribe to the service. 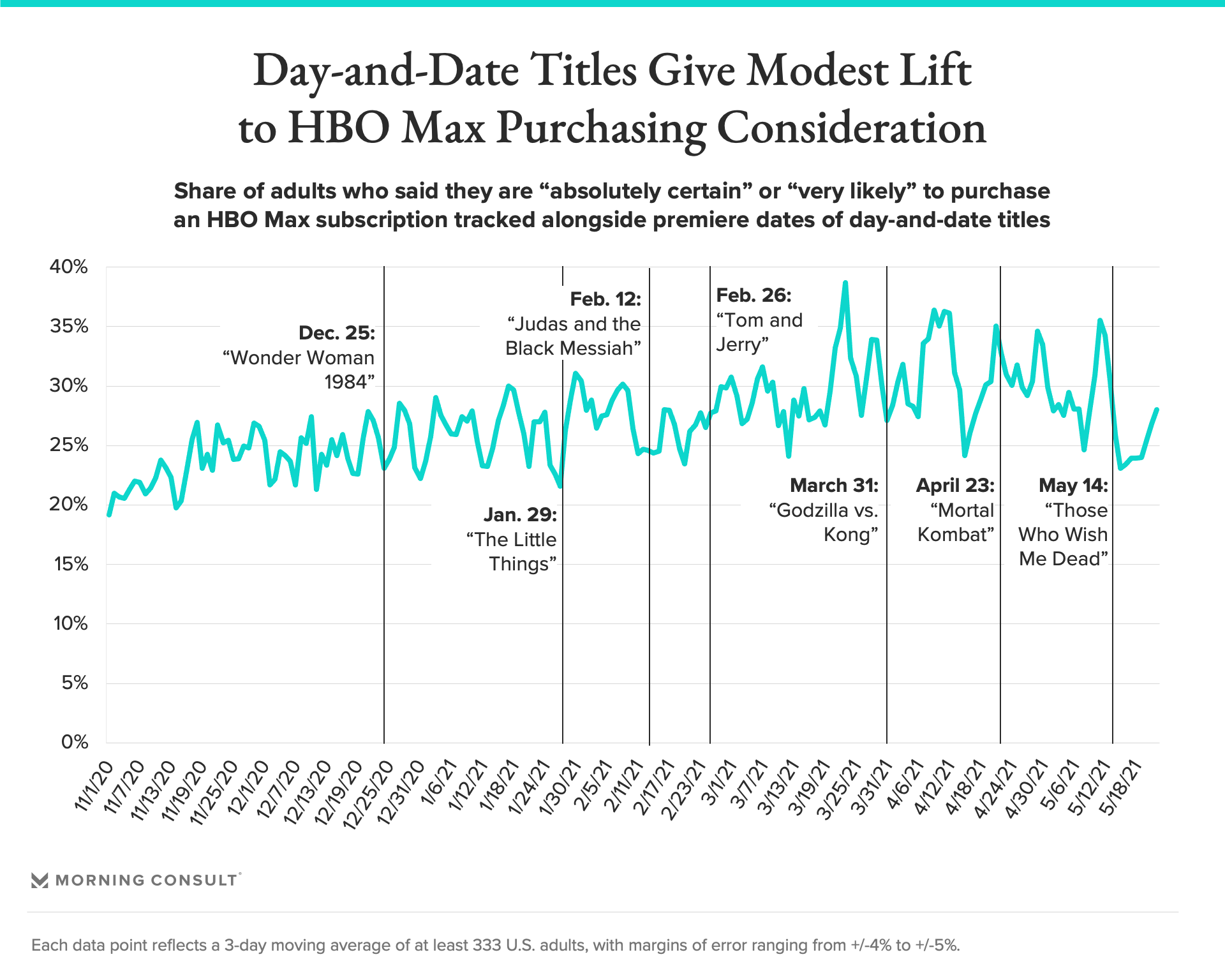 According to the platform, which tracks daily consumer attitudes for more than 4,000 brands in 15 countries, the inclusion of day-and-date titles has seemingly boosted HBO Max’s appeal among consumers.

On average, 30 percent of adults said they were “absolutely certain” or “very likely” to purchase an HBO Max subscription in the three days leading up to the premiere of a day-and-date title — up 6 percentage points from the average share of likely purchaser data gathered from May 1, 2020, through May 24, 2021. Responses had an average 4-point margin of error.

In addition to the latest entry in the “Conjuring” horror franchise, Warner Bros. has 10 other films, including “In the Heights,” “The Suicide Squad” and “Dune,” set to debut day-and-date this year. However, WarnerMedia Chief Executive Jason Kilar said the studio plans to return to a more traditional distribution model for its 2022 slate, with Warner Bros. and Cineworld Group PLC inking a deal earlier this year for a 31-45 day window of theatrical exclusivity.

Purchasing consideration hit its high for the past year in the days leading up to the March 31 premiere of “Godzilla vs. Kong,” totaling 39 percent on March 23-25, according to the platform. The Angelina Jolie-led “Those Who Wish Me Dead” also sparked interest among consumers, with purchasing intent ticking up to 36 percent from May 11-13, just ahead of the film’s May 14 release.

Other titles also saw an increase following their HBO Max debuts. From Jan. 30 to Feb. 1, the weekend of “The Little Things” premiere, consumers’ average purchase likelihood totaled 31 percent, 8 points higher than the share who said they intended to purchase a subscription between Jan. 26-28.

The push to add more subscribers continued on Wednesday, when the company launched a new tier: HBO Max With Ads, though these users won’t have immediate access to day-and-date films when they premiere on the more expensive, ad-free version of the streamer.

Related: Bulk of U.S. Consumers Prefer to Sit Through Ads on Streamers — if It Saves Them Money
Film and TV Streaming