How Popular Is the Senate Filibuster? It Depends on How You Talk About It 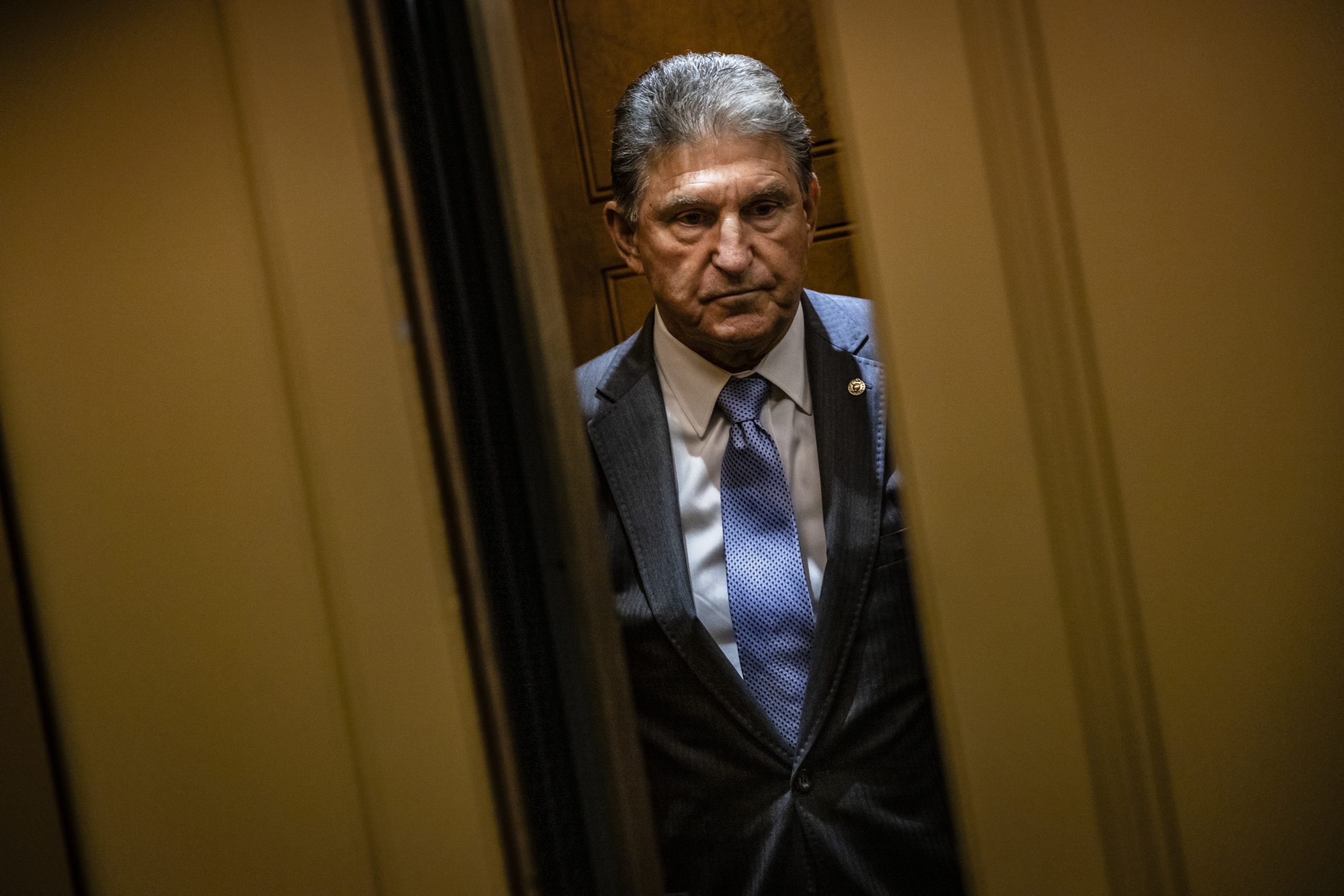 Sen. Joe Manchin (D-W.Va.) heads to a vote at the Capitol on Tuesday. Manchin's defense of the filibuster on Sunday kicked off another debate about the merits of the Senate's 60-vote threshold for most legislation, and new polling shows that its support among voters largely hinges on framing. (Samuel Corum/Getty Images)
By Eli Yokley

The Senate filibuster is having another moment after West Virginia Sen. Joe Manchin, the chamber’s most conservative Democrat, reiterated that he will not vote to “weaken or eliminate” the 60-vote threshold, which has come under fire from liberal activists who chafe at the Republican minority’s ability to block most major legislation in the evenly divided chamber.

But is Manchin’s stance on the Senate rule – which recently enabled the GOP to block the creation of a bipartisan commission to investigate the Jan. 6 attacks and threatens to scuttle much of the Democrats’ agenda – popular? The answer largely depends on framing, as a new Morning Consult/Politico poll illustrates.

The June 4-7 poll split its sample of respondents into two groups, and asked each set of voters about the filibuster in different ways. Half of the poll’s 1,990 respondents were asked whether they support the Senate’s current rule that 60 senators have to agree to allow a final vote on a piece of legislation. The other half was asked whether bills should have 51 or 60 out of 100 votes in order to pass. 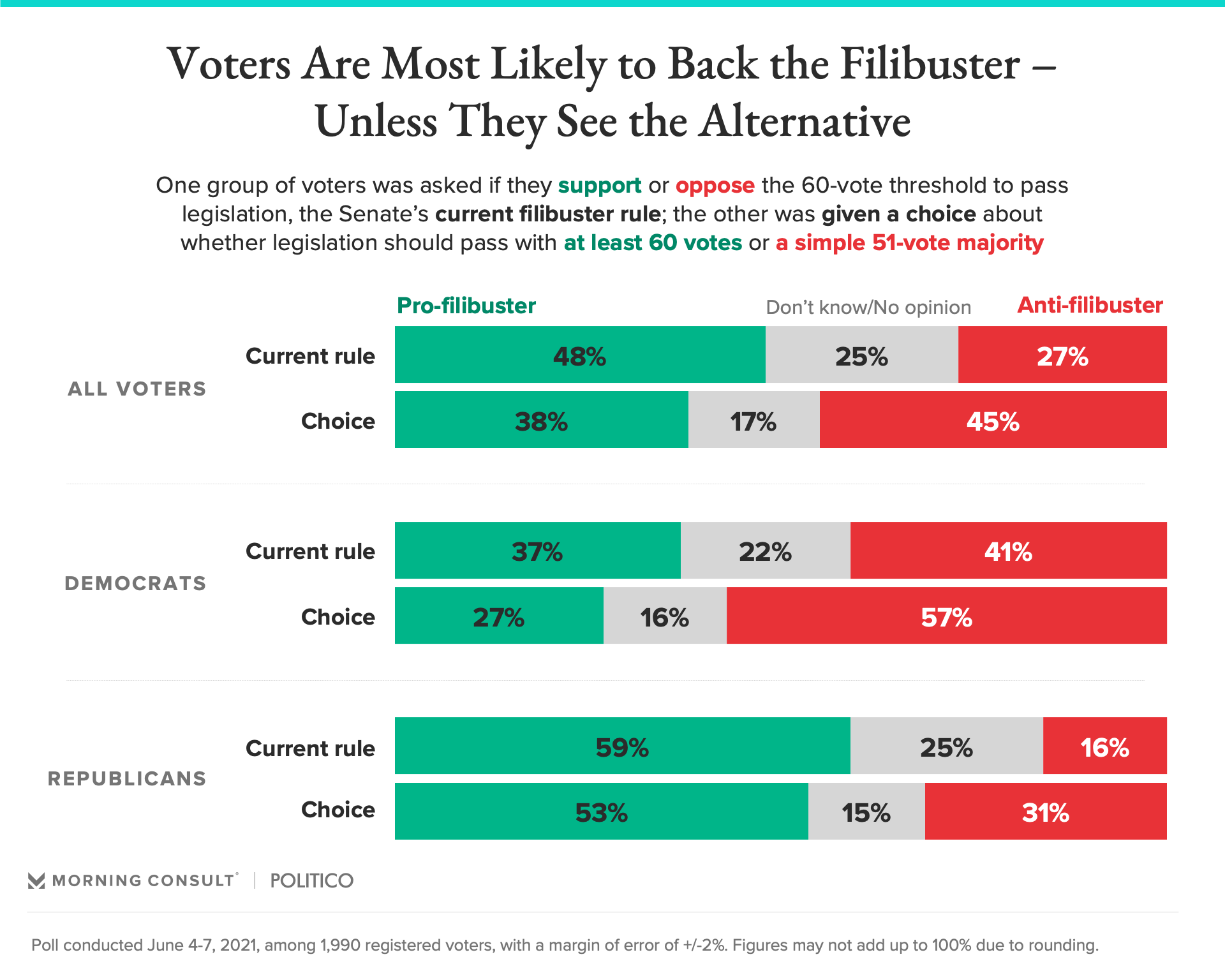 While voters were 21 percentage points more likely to back the filibuster than oppose it when it was framed as an existing mechanism, those who were given a choice between passing legislation by a simple majority or a 60-vote threshold favored the former by a 7-point margin.

When it comes to support for the current system, the survey findings suggest Republicans have done a better job in unifying their base in favor of the current filibuster than Democrats have against it, with Republicans casting the procedure as key to the Senate’s institutional integrity and some Democrats decrying it as a relic of the Jim Crow era.

But the data also suggests fertile messaging ground for both the filibuster’s defenders and its opponents: Republican voters were 15 points more likely to support a 51-vote threshold for passage than to say they oppose the filibuster, and Democrats – who are almost evenly divided on the current rule – are 30 points more likely to support reform than upholding the current system.

The survey was conducted as news emerged Sunday regarding Manchin’s op-ed in the Charleston Gazette-Mail, where he stuck a fork in Democrats’ For the People Act and reiterated his opposition to changing the Senate’s rules to advance Biden’s agenda.

While Senate Democrats, many of whom support eliminating or at least changing the filibuster in its current form, have largely held their tongues on Manchin’s announcement, it prompted fierce condemnation from some House progressives: Rep. Jamaal Bowman (D-N.Y.) declared Manchin the “new Mitch McConnell” — who is known in some corners for his legislative graveyard — and Rep. Mondaire Jones (D-N.Y.) said the op-ed should be titled, “Why I’ll vote to preserve Jim Crow.”

But despite the growing backlash on Capitol Hill as Republicans stymie legislative efforts on issues like the Jan. 6 commission and Biden’s infrastructure and social spending plans, the importance of abolishing the filibuster for Democratic voters is largely unchanged since the president started to pitch his American Jobs Plan and American Families Plan earlier this year.

According to the latest survey, 37 percent of Democrats said abolishing the filibuster should be a top priority, similar to the average monthly support for the move in March and April, but up 13 points since the beginning of the current Congress. Compared with other issues, Democratic voters are equally likely to cast the elimination of the filibuster as a top priority for Congress as they are immigration reform and student loan relief.

The overall poll has a 2-point margin of error. For the first time in a Morning Consult/Politico poll, the responses were weighted on 2020 presidential vote in addition to the typical weighting variables of age, gender, race and ethnicity, educational attainment and region.