Andrew Horton, left, and Tyler Mane in a scene from "Jupiter's Legacy." Despite a strong showing in Netflix's U.S. Top 10 rankings last month, Netflix did not renew the comic book adaptation for a second season. (Courtesy of Netflix)
By Sarah Shevenock

In recent years, Netflix has signaled its desire to stake a claim in the world of comic book adaptations, from its acquisition of the popular publishing company Millarworld to its Marvel Comics “Defenders” franchise. And last month, it looked poised to build its own cinematic universe with the debut of “Jupiter’s Legacy.”

Then came the bad reviews and the announcement that the series would end after its first season.

While experts say comic books are an excellent source of intellectual property for streamers looking to develop exclusive franchises, the arc of “Jupiter’s Legacy” underscores the challenges of successfully constructing a cinematic universe. Still, its performance in May suggests subscribers have an appetite for comic book adaptations, a new analysis of Netflix’s monthly U.S. Top 10 rankings show. 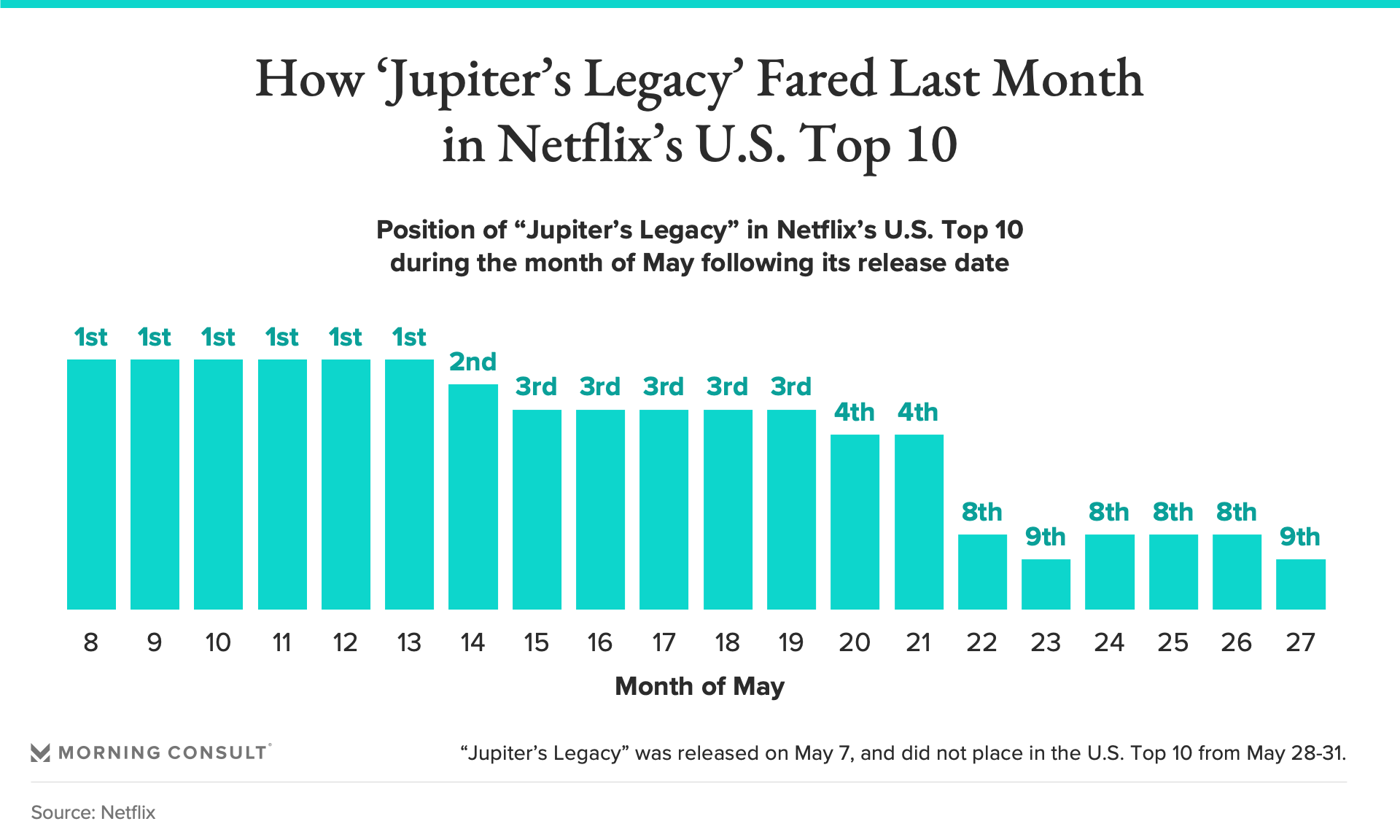 “Jupiter’s Legacy,” an eight-episode series based on Mark Millar and Frank Quitely’s comics of the same name, debuted on Netflix on May 7, and spent 20 days in the U.S. Top 10 last month, outranked by only “CoComelon ” and “The Mitchells vs. the Machines,” which each spent 31 days in the rankings. The superhero drama, which stars Josh Duhamel, spent six days in the No. 1 spot, and has an average audience score of 72 percent on Rotten Tomatoes, though its average critics score comes in at 38 percent.

While experts say comic adaptations are appealing because they often come with built-in fan bases, a passionate following doesn’t always guarantee staying power: Last week, Netflix announced that “Jupiter’s Legacy” would not return for a second season, though Millar will develop the spinoff “Supercrooks” for Netflix.

Jason Cherubini, co-founder of production company Dawn’s Light Movies, said Netflix faced a challenge with “Jupiter’s Legacy” by having to introduce a series and characters that everyday viewers might not be familiar with, creating a barrier for entry.

Still, it is possible to find success with lesser-known titles, Cherubini said, citing the 2008 release of “Iron Man” as a turning point for comic book adaptations. The first film in The Walt Disney Co.-owned Marvel Cinematic Universe, “Iron Man” illustrated that less popular characters could find widespread success on screen, just as Batman and Superman had done for decades before, he said.

In the years since “Iron Man” — which earned more than $319 million domestically, per Box Office Mojo — characters and stories largely from Marvel and WarnerMedia’s DC Comics have gained most of the attention from studios and viewers when it comes to superhero comics. However, other entrants in the superhero genre — such as “The Boys” and “The Umbrella Academy” — have found success with viewers in recent years after being adapted for Amazon Prime Video and Netflix, respectively.

Cherubini attributed the proliferation of superhero adaptations to the “risk aversion” of studios and producers who want to cash in on a known entity, but said as streamers look to build new franchises that can spawn multiple hits, the door will be opened for adaptations of other comic book genres such as fantasy and science fiction.

“It’s that shared universe mindset, which really is a newer phenomenon,” Cherubini said.

When it comes to learning from “Jupiter’s Legacy,” Cherubini said Netflix could benefit from changing its approach to releasing episodes, from giving subscribers the entire season all at once to weekly premieres. Disney+’s weekly release schedule for “WandaVision” and “Loki” creates a flexible version of the “appointment television model” and thus extends the life cycle of the show, he said.

“This slow release allows much greater conversation and discourse among the fan base and time for any negatives to potentially work themselves out,” Cherubini said. “A show like ‘Jupiter’s Legacy’ that drops all at once and had some negative reviews early does not give people reason to stick to watching and the conversations about the show are short-lived, so there isn’t much chance to recapture those fans.”

Netflix, which did not respond to a request for comment, is also set to debut a live-action adaptation of Neil Gaiman’s “Sandman,” while “Sweet Tooth,” a title from DC Comics’ Vertigo imprint, debuted on the streamer last week.