Twenty-four percent of LGBTQ+ respondents said companies release statements in support of Pride Month primarily because they're motivated by the desire for publicity, according to new Morning Consult polling. (Morning Consult Illustration by Kelly Rice)
By Alyssa Meyers

June has been recognized as Pride Month in the United States for decades, and this year, brands are celebrating en masse. But, as per usual when it comes to corporate America’s embrace of social and political topics, consumers are expressing a healthy amount of skepticism about companies’ motivations, according to a new survey from Morning Consult.

Roughly one-quarter (24 percent) of the 381 U.S. adults who identified as LGBTQ+ in the June 4-8 survey said companies’ statements about Pride Month are primarily motivated by their desire for publicity. 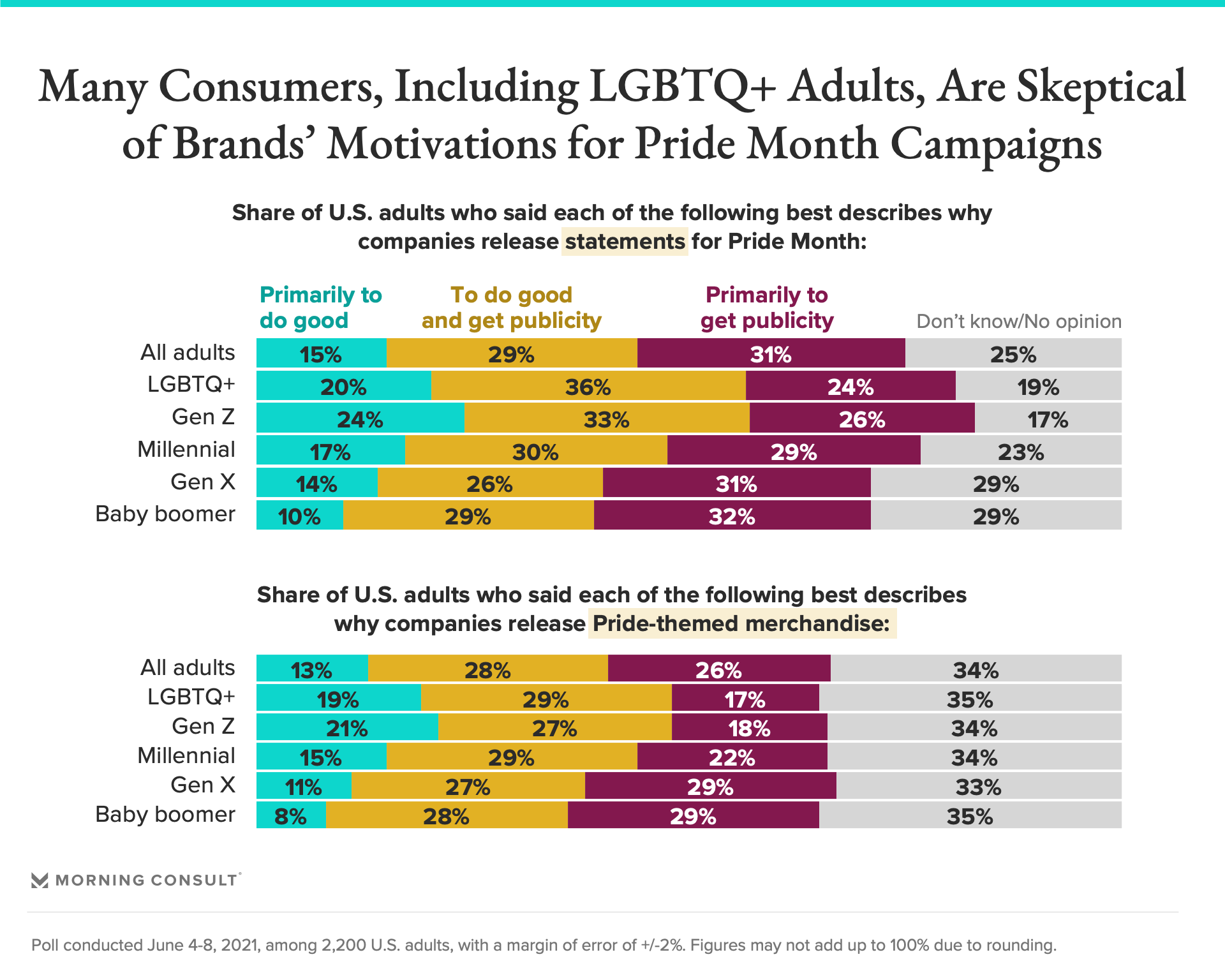 Another 36 percent said they think companies are engaging with Pride for publicity but also because they want to do good, while 20 percent of the group said they primarily believe brands want to do good.

Generation Z adults are slightly more likely than the general public to take these statements at face value, with a larger share saying they think brands publicly support Pride Month because they primarily want to do good (24 percent) or to make a positive impact and get publicity (33 percent).

That skepticism is even higher when it comes to Pride-themed merchandise as opposed to statements: 34 percent of consumers and 35 percent of LGBTQ+ adults said companies that release Pride products are driven primarily by the desire for publicity.

Nonetheless, many brands are selling rainbow-themed merchandise this month and working to convince consumers that their efforts are more than marketing stunts.

The Walt Disney Co. launched a rainbow collection to fund donations to organizations that help the LGBTQ+ community around the world. Lego designed an “Everyone is Awesome” set inspired by the rainbow flag to celebrate diversity, while fashion brands such as Nike Inc. and Adidas AG also regularly participate in Pride Month.

“Over the past few years, there’s been an explosion in Pride campaigns, but we’re also seeing more and more that the LGBTQ community is holding brands responsible for how they approach their Pride campaigns,” said Spencer Harvey, communications manager at GLAAD. “Visibility is great, but nowadays, it’s about how your campaign is stepping up and showing that you support the community.”

In fact, for companies that can’t credibly claim their Pride campaigns are mostly substantive, marketing experts agreed it’s best for them to do nothing at all.

“If it’s not who you are as a brand, just stay away,” said Jim Joseph, president of North America for McCann Health and an adjunct instructor in the Integrated Marketing and Communications program at the NYU School of Professional Studies Division of Programs in Business. “If it’s not important to your audience or employees, don’t force fit it, because that comes across immediately.” 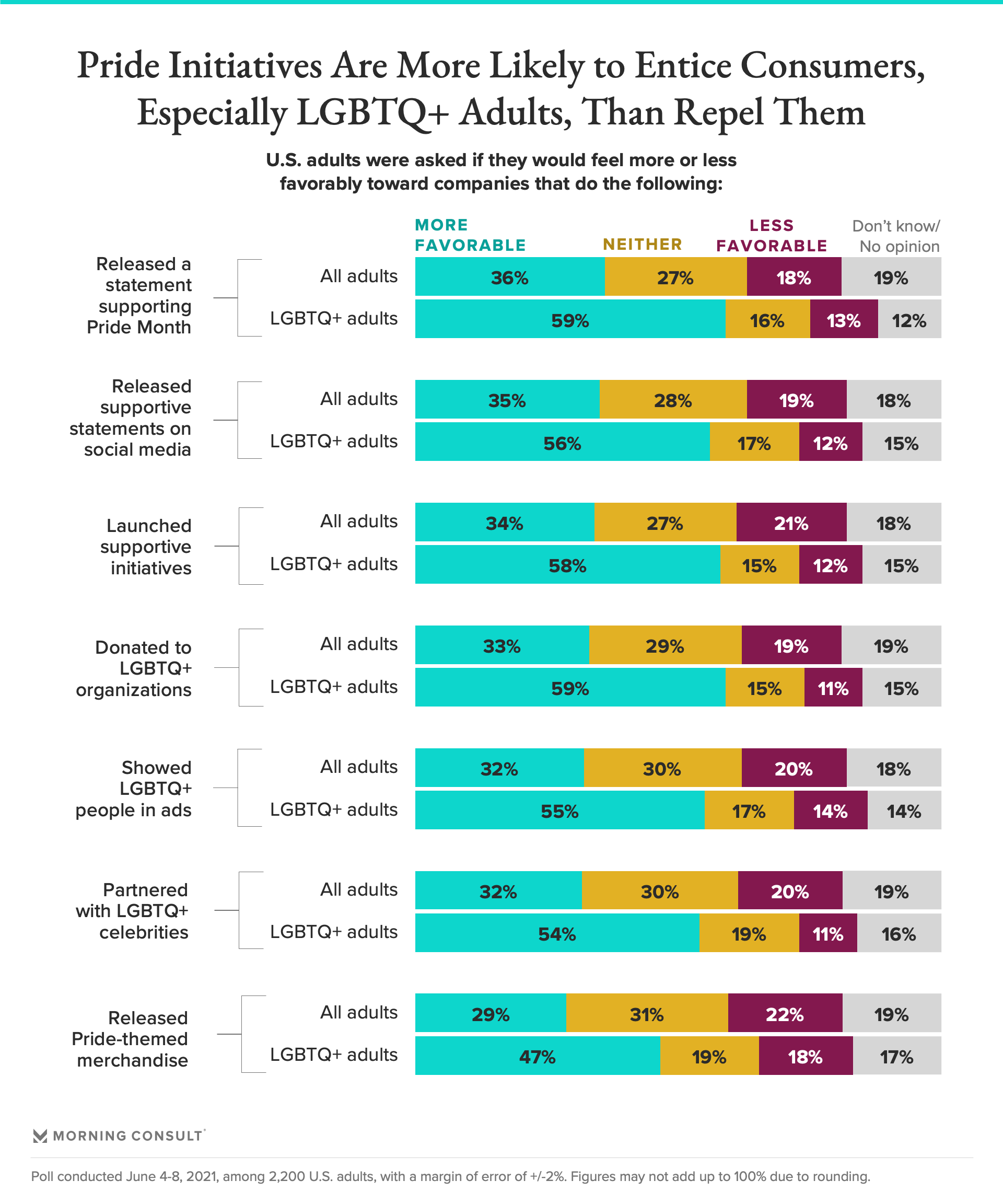 For companies that do support equal rights regardless of gender or sexuality, Pride initiatives can make many consumers see them in a more favorable light, according to the survey.

On average across seven different potential corporate Pride Month initiatives, 55 percent of LGBTQIA+ adults said those initiatives would make them feel more favorable toward a brand, while 1 in 3 U.S. adults said the same.

For some, these Pride-related actions won’t move the needle about a brand either way: 29 percent of Americans, on average across the seven Pride initiatives, said these decisions would neither make them feel more nor less favorable about a brand.

The poll was conducted among 2,200 U.S. adults, with an overall margin of error of 2 percentage points and a 5-point margin of error for responses among adults who identified as LGBTQ+.

Support for corporate participation in Pride Month is especially high among Democrats and Gen Zers, with favorability among those consumers roughly matching that of LGBTQ+ consumers across the initiatives listed in the survey.

Republicans are more likely to feel unfavorably than favorably about companies expressing support for the LGBTQIA+ community, according to the poll.

“If you’re doing something right, you’re going to make some people mad,” said Brandon Zelasko, vice president of strategy and operations at SE2, a mission-driven marketing agency focused on helping clients create social change. “You should be willing to lose some customers. That’s the difference between performative and authentic campaigns.”

Supportive statements, initiatives that back LGBTQ+ priorities and donations to LGBTQ+ organizations are seen most favorably of all the options among all adults and among LGBTQ+ adults in particular.

Companies releasing Pride-themed merchandise was one of the least popular options, reflecting some of the skepticism associated with companies turning a profit amid their support of Pride.

“Brands are increasingly expected to be citizens,” said Sarah Unger, founding partner at cultural insights and strategy firm Cultique, who has conducted qualitative research for clients about Pride Month. “It’s respectable for a brand to want to engage with an issue, and it’s important to do it in a way that’s impact-driven rather than image-driven.”

For instance, companies including Alphabet Inc.’s Google, Boston Beer Co.’s Samuel Adams, Amazon.com Inc.’s Audible, Match Group Inc.’s Tinder, Kellogg Co.’s Pop-Tarts and more are working this year with GLAAD on its “Pride Unboxed” initiative to drive donations to the nonprofit by offering access to their own products.

Others are relying on years of work with different nonprofits to avoid accusations of “rainbow washing,” a reference to the use of colorful images on social media or the sale of rainbow merchandise without actual support for the LGBTQ+ community. Shake Shack, which rainbow-fied its Twitter icon and is selling a rainbow milkshake, is one example, as the chain has a history of financial support for The Trevor Project, an organization focused on crisis intervention for LGBTQ youth.

Melanie McShane, executive director of strategy at Omnicom Group Inc.’s strategic branding firm Siegel+Gale, said she counsels clients to start from the inside when it comes to Pride campaigns, first evaluating their own hiring and human resources practices and amplifying minority voices among employees before focusing on public-facing work.

She also emphasized the importance of supporting the cause financially, both through donations to nonprofits and by hiring LGBTQ+ creators and paying them properly for their work.

“We often see situations where a large amount of money is spent on media or product production, without ever finding its way to organizations or the community,” McShane said.

Companies should conduct research into the lesser-known struggles of subgroups within the LGBTQ+ community so that they’re more likely to find opportunities where they can genuinely make a difference, Unger said. Educational campaigns informing consumers about anti-LGBTQ+ legislation and the importance of sharing pronouns are also strong ways for companies to engage in Pride Month, according to Harvey.

While these strategies might prove helpful as brands engage with social issues this month and beyond, consumer skepticism is higher than ever, marketers said, and customers are ready to denounce brands that treat moments such as Pride Month as little more than marketing opportunities.

“Consumers have spent the last year in very trying times, but they’ve committed themselves to social justice,” McShane said. “This year, more than ever, that scrutiny will be thrown back at corporations.”

Related: Americans Are Divided on How Brands Should Respond to Chauvin Verdict, Predominantly Believe Statements Are Not Genuine
LGBTQ+