Despite a prevailing shift toward greater comfort with pre-pandemic activities including returning to the office, consumers are opting to pay more each month to drive cars rather than turn to public transportation, writes Morning Consult economic analyst Kayla Bruun. 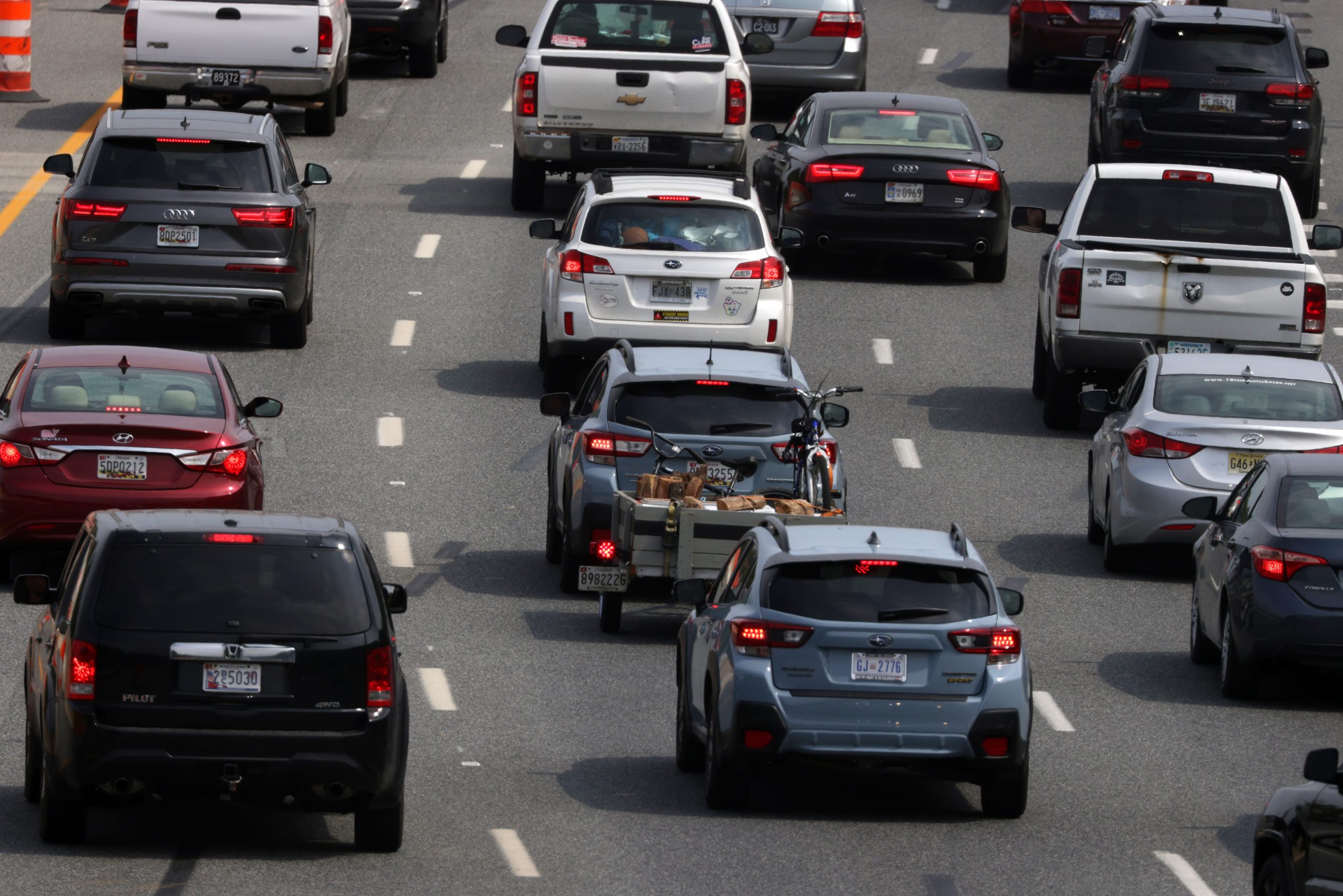 Traffic on the Chesapeake Bay Bridge right before Memorial Day weekend in Annapolis, Md. In May, U.S. consumers reported double-digit increases in auto-related expenses since January, but spending on public transit stayed the same. (Alex Wong/Getty Images)
By Kayla Bruun

Rapid increases in demand combined with persistent bottlenecks in supply drove prices of cars and gasoline higher since the start of the year, forcing consumers to choose between paying more for car-related expenses or cutting back on car travel. Consumers resoundingly doubled down on their preference to drive.

Bolstered consumer confidence and stimulus-augmented incomes prompted U.S. households to absorb price increases on car-related expenses since the beginning of the year, an indication of the persistence of car-centric lifestyles even as health risks from the pandemic abate.

An analysis of Morning Consult’s monthly household finance data found that monthly expenses related to auto ownership, including loan or lease payments, insurance and gas, collectively jumped by 18 percent in May compared with their levels at the beginning of this year. 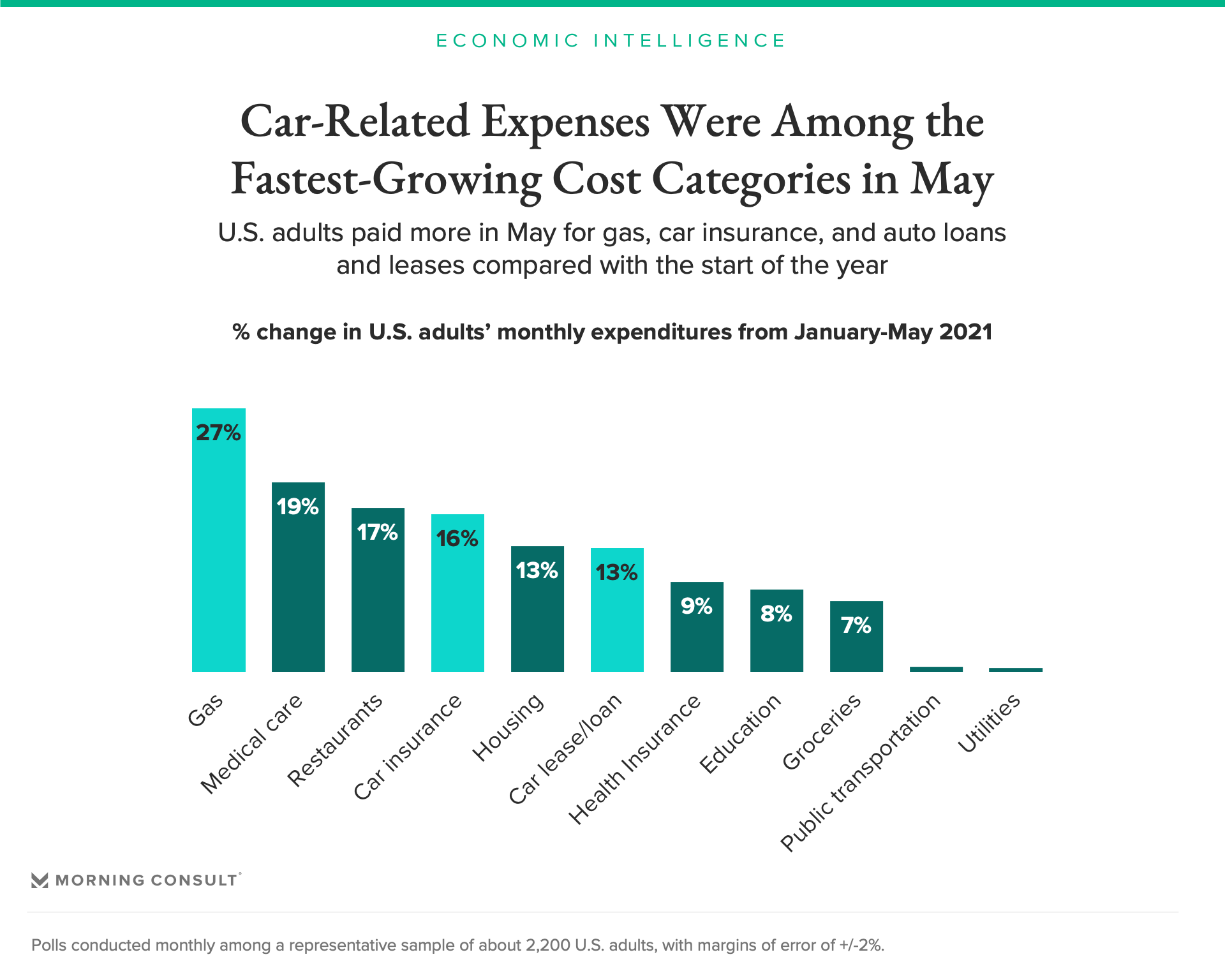 Among the 11 major categories tracked in Morning Consult’s monthly survey, spending on gas registered the strongest percentage increase since January (27 percent). By comparison, respondents estimated that total monthly expenditures grew by an average of 9 percent over that same period. The higher gas spending was likely driven almost entirely by price increases; the Bureau of Labor Statistics reported that the CPI for gasoline grew 27 percent over that same period.

Prices for new and used cars have also risen, yet buyers have been undeterred. Car ownership increased among surveyed adults from 79 percent in January to 84 percent in May. Rather than pare back spending in response to higher prices, consumer demand for cars has been resilient: Monthly car payments and spending on insurance have climbed 13 percent and 16 percent, respectively. Despite the elevated cost of driving, consumers don’t seem ready to turn to public transportation as an alternative mode of mobility. Spending on public transportation remained flat since January. 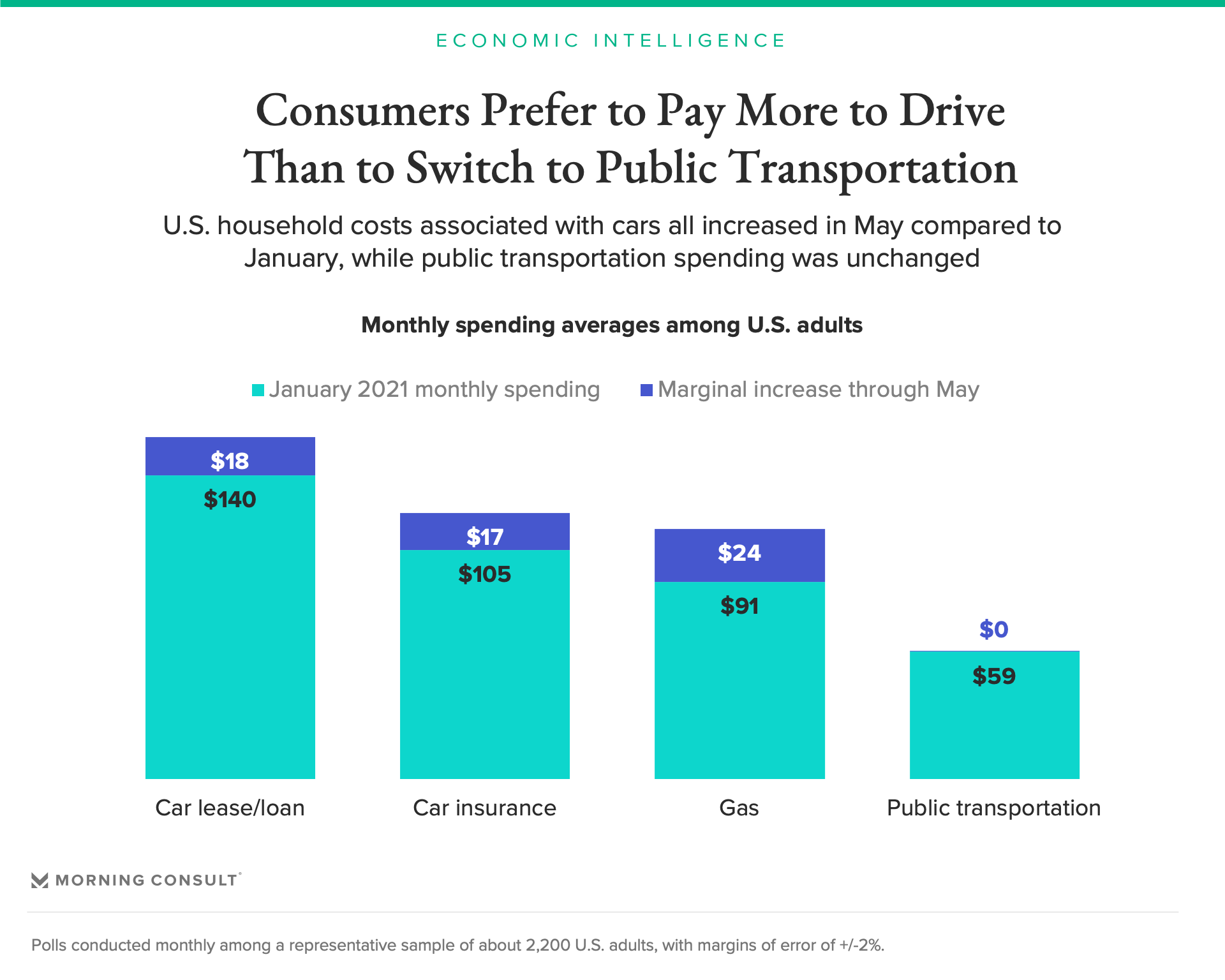 Although car-related expenses recorded some of the strongest increases so far this year, those costs make up a relatively small share of household budgets compared with the largest component tracked by Morning Consult: housing. Monthly rent or mortgage payments were not the fastest-growing cost since January, but they have consistently been the biggest, accounting for almost half of total spending on the categories analyzed.

Changes in monthly housing costs carry an outsized influence on overall household spending. This cost component has inflation implications as well: the BLS assigns a combined weight of almost 40 percent to mortgage and rent prices when calculating its “core” CPI measure, which excludes volatile food and energy prices. Comparatively, Morning Consult found the combined weight of the three car-related expenses tracked for this analysis was about 14 percent of total monthly outlays, yet they accounted for 22 percent of total growth in household spending since January. 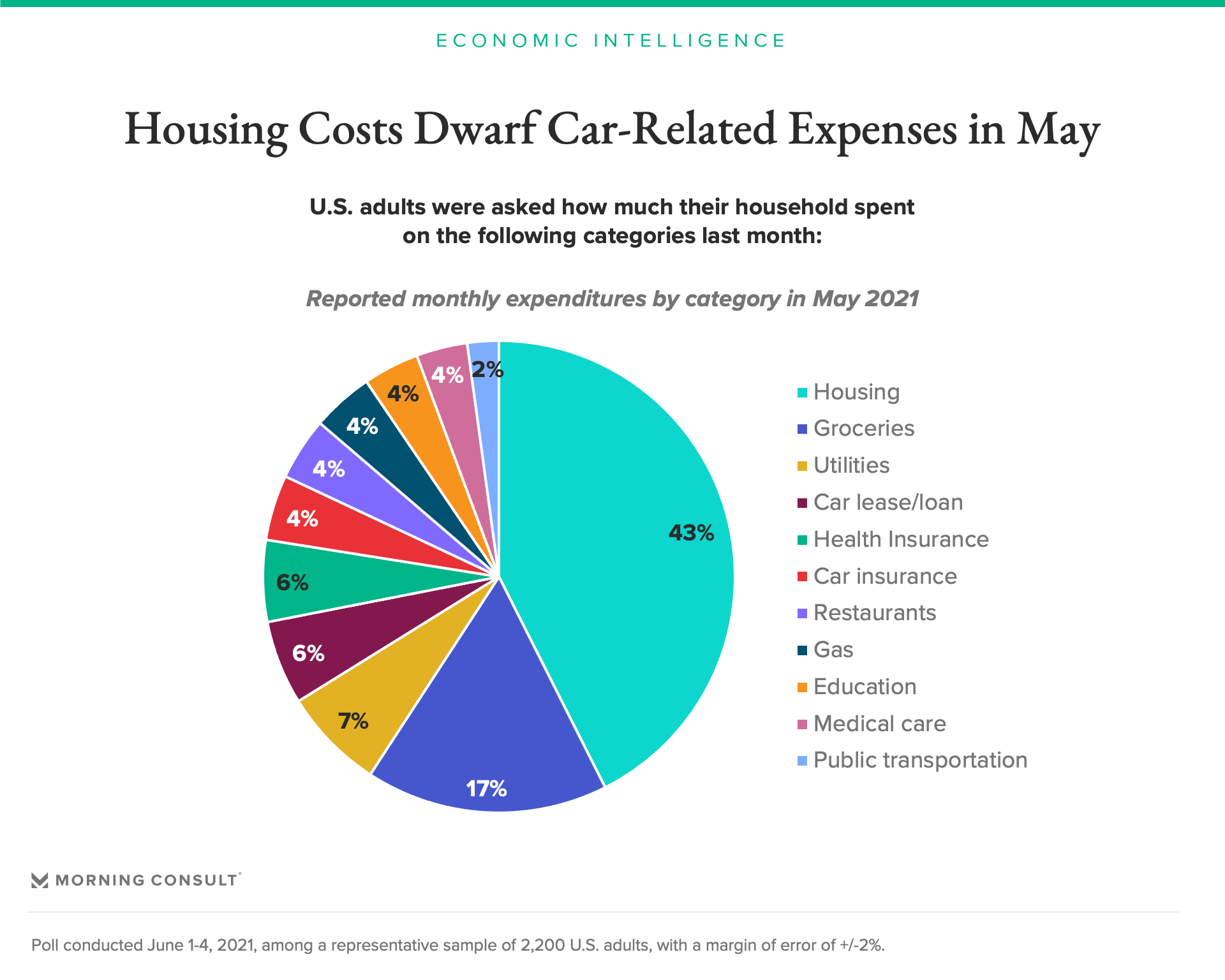 Public transportation stands out as one of only two cost components tracked for this analysis that did not register an increase in spending so far this year. Consumers’ reluctance to divert spending away from privately owned vehicles and toward public transportation may be an early indication that certain pandemic-induced behavioral patterns may persist.

While some industries, like restaurants, are benefiting from customers’ increasing willingness to venture out, previous pillars of daily life such as the morning commute have yet to be re-established in their previous form. Although 63 percent of current remote workers claimed they would now feel comfortable returning to the office as of June 9, compared with fewer than half in early January, this change in sentiment has not yielded a concurrent increase in spending on commutes via buses, trains or taxis. Restaurant spending, by comparison, has jumped 17 percent since January — a reminder that the pace of recovery will not be uniform across the multiple industries hard hit by the pandemic.

The pandemic prompted Americans to move outside of cities and adopt car-centric lifestyles, reversing a decadeslong trend toward urbanization. Unlike the fear of eating indoors, this change is likely to persist even after the pandemic ends due to the growing prevalence of hybrid work arrangements and the stickiness of car ownership. Economic activity in the suburbs will enjoy a rebirth for the foreseeable future, with urban real estate (commercial and residential) struggling to regain its pre-pandemic prominence.

Methodology note: Morning Consult conducts a monthly survey of a representative sample of 2,200 U.S. adults with questions concerning household finances, including spending levels on various goods and services. Average monthly spending levels per category, per demographic were estimated as a weighted average value based on the midpoints for each response level.