Trump’s election attacks are resonating with GOP voters, many of whom say they believe reviews will overturn results 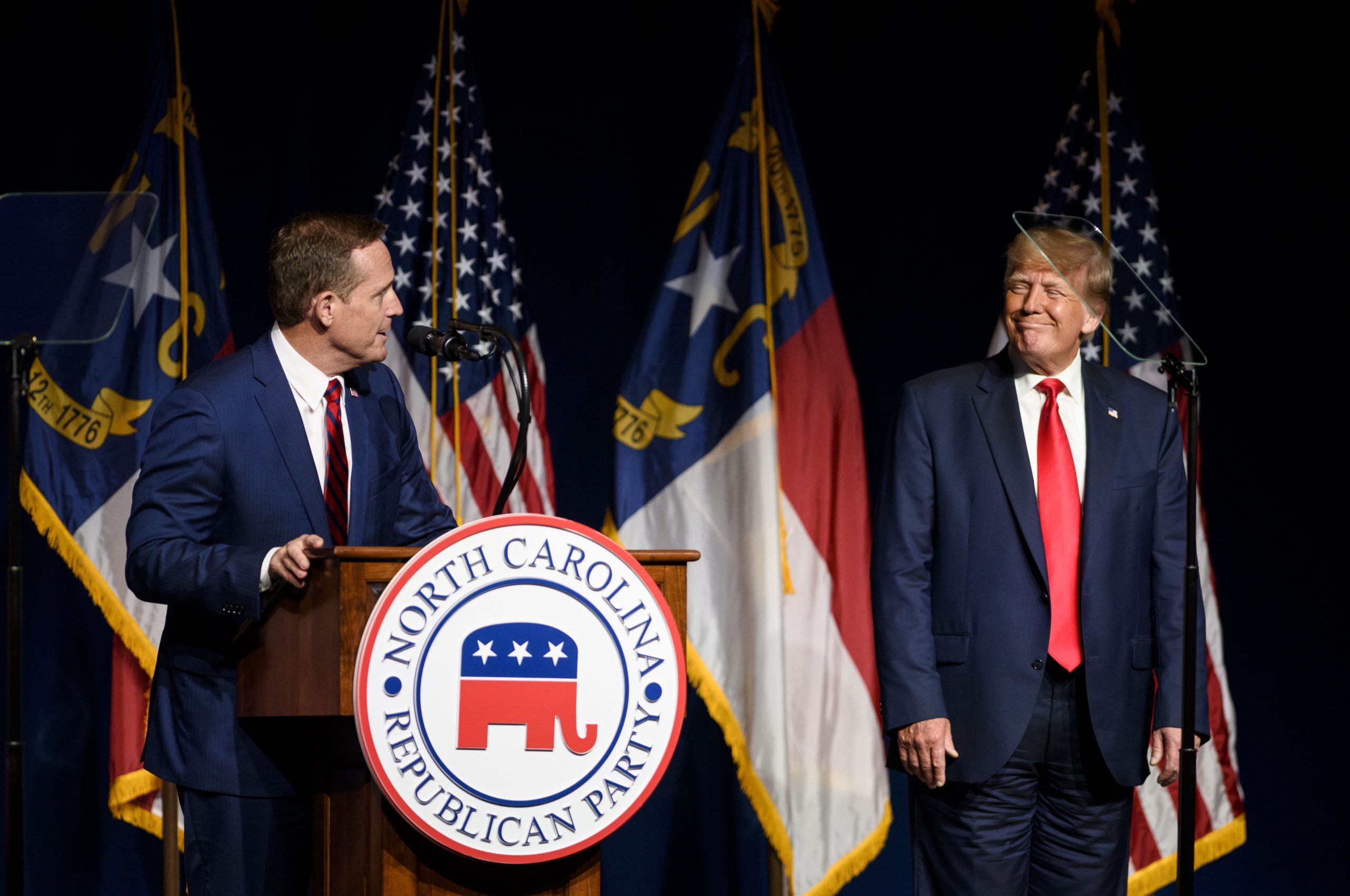 People in former President Donald Trump’s orbit say he appears eager to engage in the 2022 midterm campaign, bringing a slew of current and potential candidates through his properties as they solicit his coveted endorsement, raising money to fund his own operations and seeking out early polling data to get a feel for the shaping electorate. He’s even planning to resume rallies and join Texas Gov. Greg Abbott (R) on a visit to the U.S.-Mexico border later this month.

But so far, he has refused to do one thing that a number of Republican strategists involved in next year’s races worry is essential for motivating the party’s voters: end his assault on the legitimacy of last year’s elections.

One former Senate Republican campaign official, who like more than a dozen other strategists spoke privately as they continue to navigate the former president’s ego and reckon with his strong standing among the party’s electorate, said Trump’s continued focus on his loss to President Joe Biden would do the Democrats a “huge favor” next year.

A review of Trump’s comments from the stump, in media interviews and in press releases sent by the 45th president’s political committee since he left the White House indicates a president largely focused on the past. Along with attacks on his dissenters, he has issued dozens of statements doubling down on his false claims about election fraud and championing state-level reviews of certified election tallies that have virtually no chance of overturning his loss.

New Morning Consult/Politico polling reveals that a large chunk of the GOP voter base is following his backward-looking lead — with just over half saying they believe that the reviews could overturn 2020’s results. 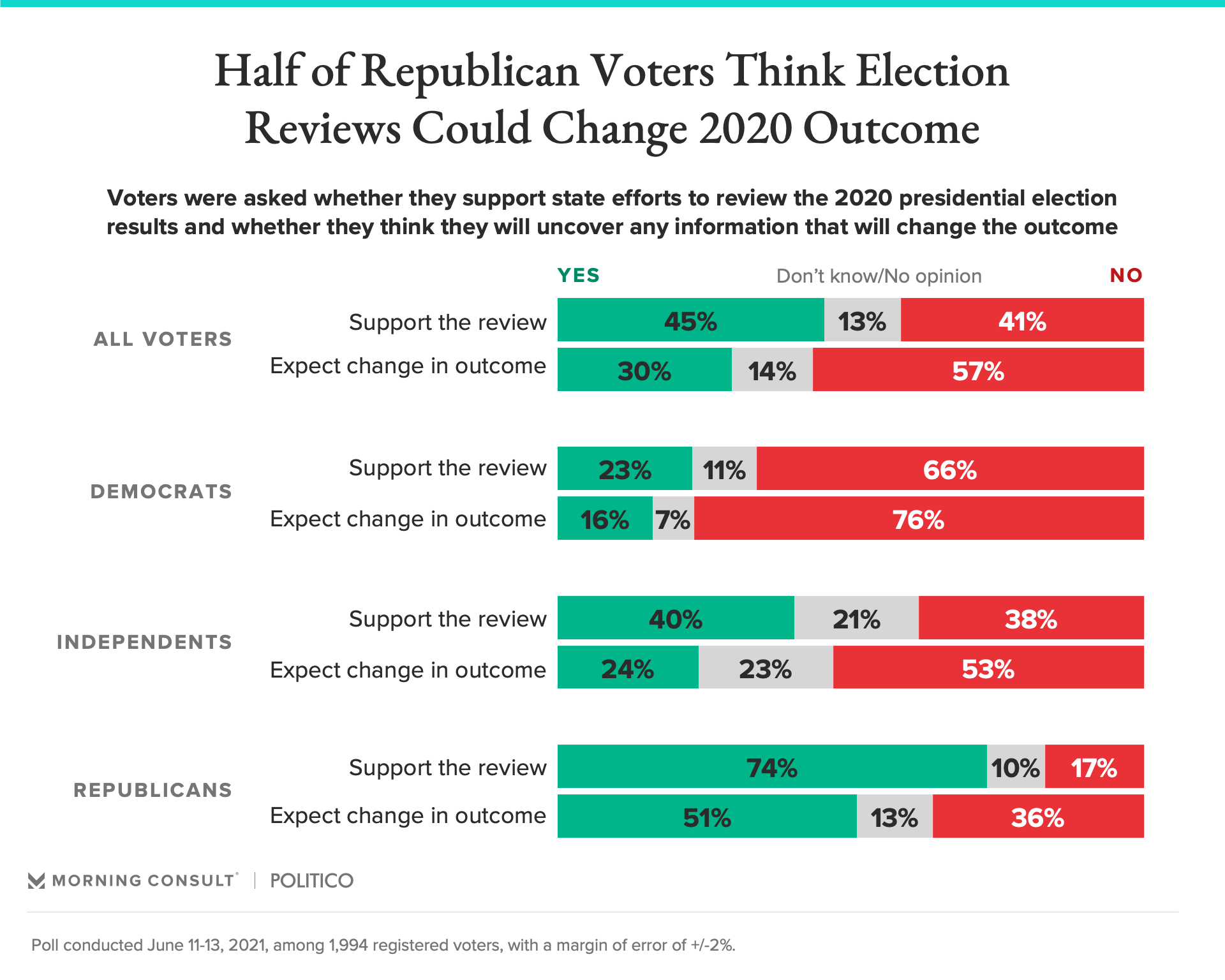 Three in four Republican voters (74 percent) said they support state-level efforts to review the 2020 presidential election results, and another 51 percent think the reviews will uncover information that will change the election’s outcome. The results follow another survey which found that roughly 3 in 10 Republicans say it’s at least somewhat likely that Trump will be reinstated as president this year, a fantasy that the former president has relayed to a number of close confidantes, according to Maggie Haberman of the New York Times.

Trump’s loss – and his repeated insistence that the 2020 election was a “fraud” – has contributed to a decline in confidence among Republican voters about the U.S. electoral system itself, a figure that has remained stubbornly low since Biden’s victory.

It’s concerning to a number of Republican strategists, who partly blame Trump’s behavior for a decline in turnout that led to the party’s losses in two Georgia runoff elections for Senate and continued in a New Mexico special election earlier this year, and believe it could threaten their efforts to gain control of Capitol Hill for the second half of Biden’s presidency. To their point, polling conducted in April found Democrats were beginning the 2022 cycle with an edge over the GOP in voter enthusiasm.

“The danger with him is always that he juices turnout – Democratic turnout, that is – and that he continues to remind people why they turned him out last year,” said Scott Jennings, a former campaign strategist for Senate Minority Leader Mitch McConnell (R-Ky.). “He could also put GOP candidates in awkward positions if he continues to relitigate and make false claims about the 2020 election.”

The great mystery is whether these low- or no-propensity Trump voters show up. Nobody knows.

In spite of Trump’s current approach, Republicans have at least three things working in their favor: razor-thin Democratic majorities in both chambers, the electorate’s historical midterm penalty against the president’s party and a House redistricting cycle that – on its face – looks like it should benefit the GOP. One former Republican campaign committee official said that rank-and-file Republicans who have delivered victories in the past will show up again in a referendum on the Biden administration – even if those “reading Q conspiracies online” stay home.

But while 2020 showed evidence that some moderate-leaning voters were willing to hold their nose and back GOP candidates down-ballot even if they couldn’t bring themselves to vote for Trump, the party has struggled at times when he was not on the ballot.

“The great mystery is whether these low- or no-propensity Trump voters show up,” Jennings said. “Nobody knows.”

That makes Trump’s critique of the electoral process itself all the more concerning to GOP strategists. One working on a contested Senate campaign next year said that for a party that’s hoping to hold its ground in places like North Carolina and Ohio and make gains in Pennsylvania and Arizona – all key states for retaking the Senate – the best thing Trump could do would be to admit his loss and take steps to rebuild confidence in elections rather than reiterating talk of a hoax.

The comment echoed those of many others involved in the midterm campaign who believe that Trump’s energy would best be directed at criticizing and creating a referendum on the Democrats and Biden, whose overall economic and social agenda remains relatively popular despite cracks on issues such as immigration.

Trump – who can still attract a television camera and a crowd despite being banned from major social media platforms – remains the party’s most popular figure, with an 83 percent favorability rating among GOP voters in the latest survey. And according to polling earlier this month, 59 percent of Republicans said he should play a major role in the GOP’s future.

Related: 29% of GOP Voters Say It’s Likely Trump Will Be Reinstated as President This Year

Several strategists said Trump should use that standing on party-building exercises, such as leveraging his loyal list of small-dollar donors to support the GOP’s House, Senate and gubernatorial committees — which he’s largely neglected so far — and eventual nominees in competitive races whose outcomes will decide the tone and tenor of Washington in advance of the 2024 presidential election.

“President Trump is the greatest small-dollar fundraiser in history,” said Chris Pack, a Republican strategist and former official at the Senate Leadership Fund, a McConnell-aligned outside group, and the National Republican Congressional Committee. “The single most important thing he can do to ensure Republicans win back control of the House and Senate is to use his small-dollar fundraising lists to raise funds directly for Republican candidates, and for the NRSC and NRCC, using the WinRed platform he was instrumental in creating for this very purpose.”

Trump has instead leveraged his platform to raise money for his own political apparatus, which he’s used to foment discord in the electoral process and begin to promote his efforts to sway 2022’s Republican primaries – including, but not exclusively, against his dissenters within the party – as he leans in to talk of another run for the White House in 2024.

It’s unclear how a weaker-than-expected showing for Republicans next year would affect his own political standing ahead of the next cycle, but even his conservative detractors, who are quick to point out that the former president’s strength has never come from being a team player, expect him to make the most of any electoral outcome.

“If Republicans win a majority, he’ll insist it’s good for him. If they fail to take it back, he’ll find a way to make it about him,” said Kevin Madden, a former Republican strategist who worked as a top aide on Utah Republican Sen. Mitt Romney’s two campaigns for president.

A spokesman for Trump did not respond to a request for comment.