Americans — Especially Democrats, High Earners and the Highly Educated — Are Warming Up to Automation

Compared to 2018, slightly more people now say such technology will increase U.S. jobs, while fewer say it will cut jobs 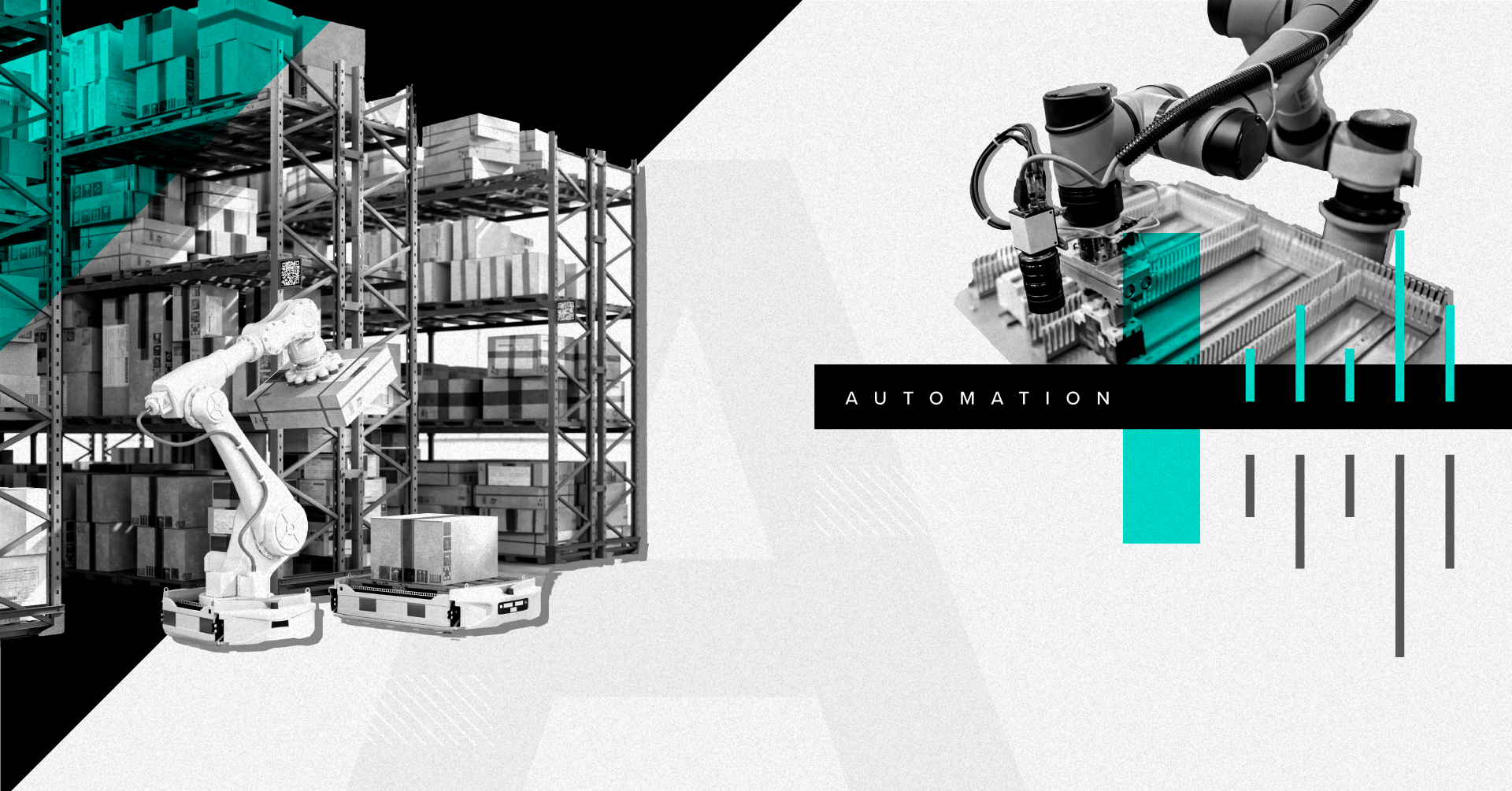 The pandemic has ushered in an unintended consequence for workers across the country: an expedited timeline for more widespread adoption of automation. To account for the possibility of sick workers, companies have made investments in robotics and artificial intelligence.

This trend is something Americans are increasingly likely to embrace, new polling indicates.

A Morning Consult survey conducted May 25-29 among 2,199 U.S. adults found that the public has slightly warmed to the notion that automation will increase job opportunities, with Democrats, those making more than $100,000 annually and people with graduate degrees fueling that movement.

One in 4 respondents in the survey said they think the rise of automation and associated technologies — such as artificial intelligence, driverless cars and robots — will increase the number of job opportunities in the U.S. workforce, up from 20 percent who said the same in a May 2018 poll.

But the share of people who believe automation will hurt U.S. jobs fell by a larger margin over the same period, to 48 percent, a decline of 11 percentage points. Both surveys have a 2-point margin of error. 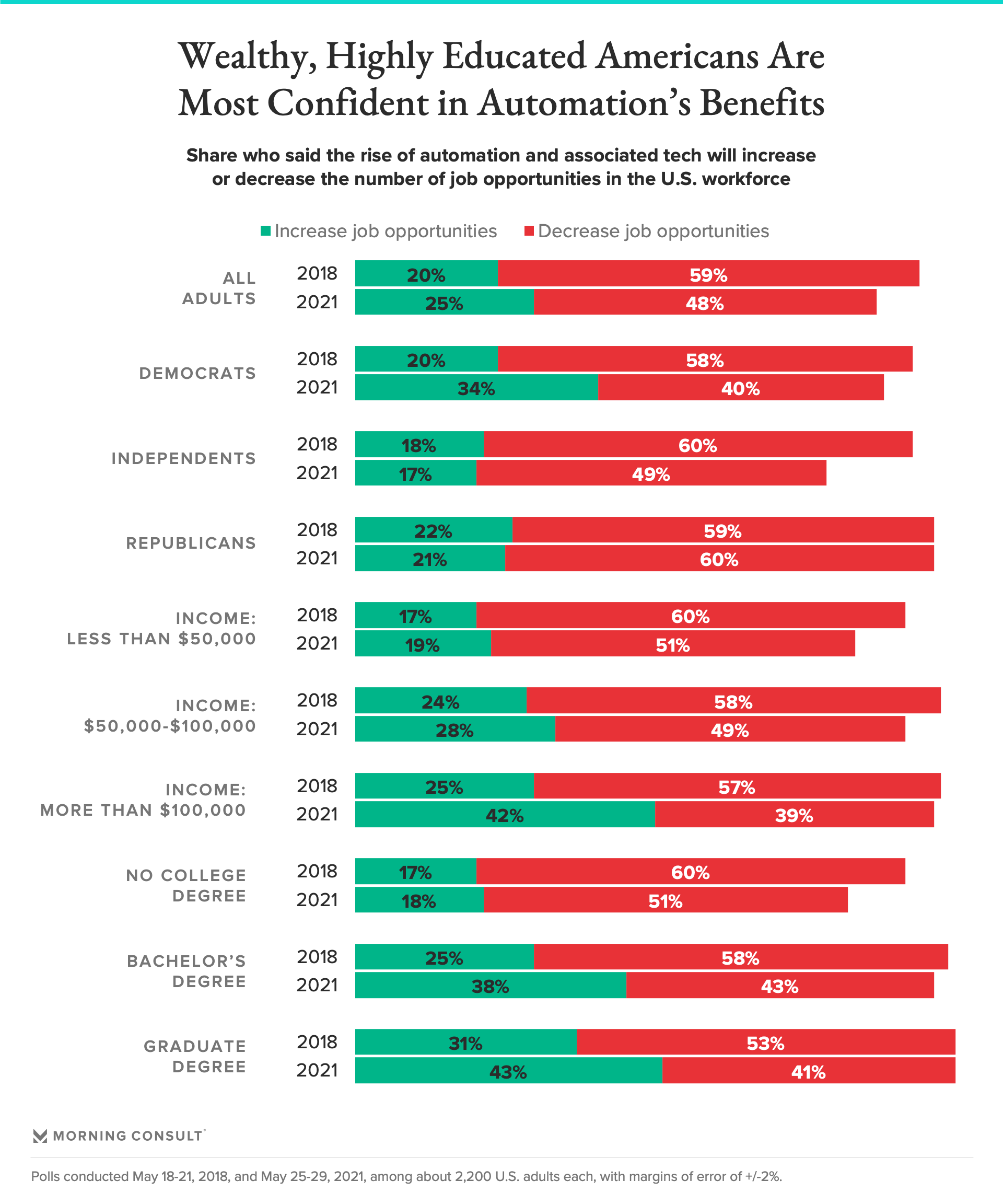 “I think more people are able to see the potential benefits of these technologies,” said Mark Muro, a senior fellow and policy director at the Brookings Institution’s Metropolitan Policy Program. “Certainly that’s been demonstrated through the crisis, in the ways technology has kept offices running.”

That observation appears to have resonated with more educated and affluent Americans.

Three years ago, 25 percent of adults who earn more than $100,000 per year and 31 percent of those with graduate degrees said they thought automation would boost job opportunities in this country. Those shares have since risen to 42 percent and 43 percent, respectively.

Democrats followed a similar trajectory on the question, with shares rising from 20 percent in 2018 to 34 percent in 2021.

Consequently, the share of adults in the three aforementioned groups who think automation will result in fewer available jobs dropped: 40 percent of Democrats (down from 58 percent), 39 percent of high-income Americans (down from 57 percent) and 41 percent of graduate-degree holders (down from 53 percent).

Many of the people who make up those wealthy and highly educated cohorts are “hedged against automation displacement,” said Shalin Jyotishi, senior policy analyst at New America’s Center on Education and Labor, meaning that “a lot of them might be well-positioned to benefit from some of that displacement or augmentation, whether they’re business owners or investors.”

Conversely, Republicans, adults making less than $50,000 annually and those who don’t have a college degree were mostly static in their views about automation’s potential to increase job opportunities, with about 1 in 5 in each group believing that technology would boost employment.

At least half of adults in each of those three groups said automation would decrease job openings, though the lower-income and non-college educated populations both saw a 9-point decline in that category since 2018.

The groups most at risk for displacement due to automation were also most vulnerable to the negative impact of the pandemic, Jyotishi said, especially those without a college degree and people of color. Viewed through that lens, the data makes sense, given that “those folks are simply less shielded than the wealthier folks and the college-educated folks are,” he said.

Whatever the work setting, it would be nearly impossible to ignore some of the new technological changes brought on by COVID-19. While a significant share of the public is still skeptical that the automation of jobs through these new technologies has benefited U.S. workers, the past three years have certainly made people less certain that these advancements have been detrimental to the workforce.

Twenty-seven percent of respondents said the automation of jobs through new technology in the workplace has helped U.S. workers, up 5 points from the 2018 survey, while 40 percent said the shift has hurt labor, an 8-point decline. 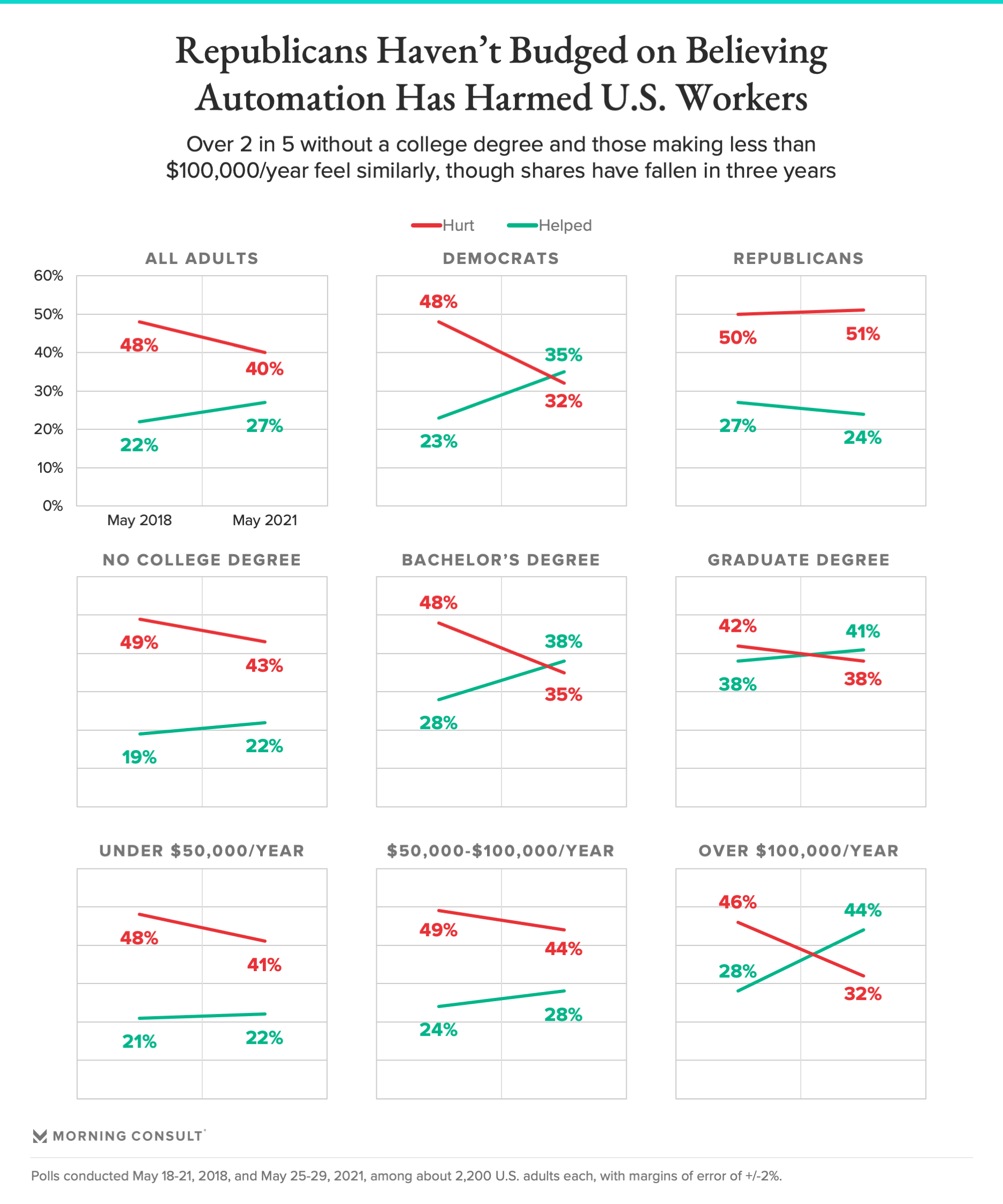 As in the question on whether automation increases or decreases job opportunities, Democrats, upper-income Americans and the college-educated are increasingly likely to believe automation helps U.S. workers.

These groups, Muro said, have seen how automation has not only changed their consumption, but in many cases experienced firsthand “working in organizations that invest in training and retraining, and some of them are beneficiaries, frequently.” 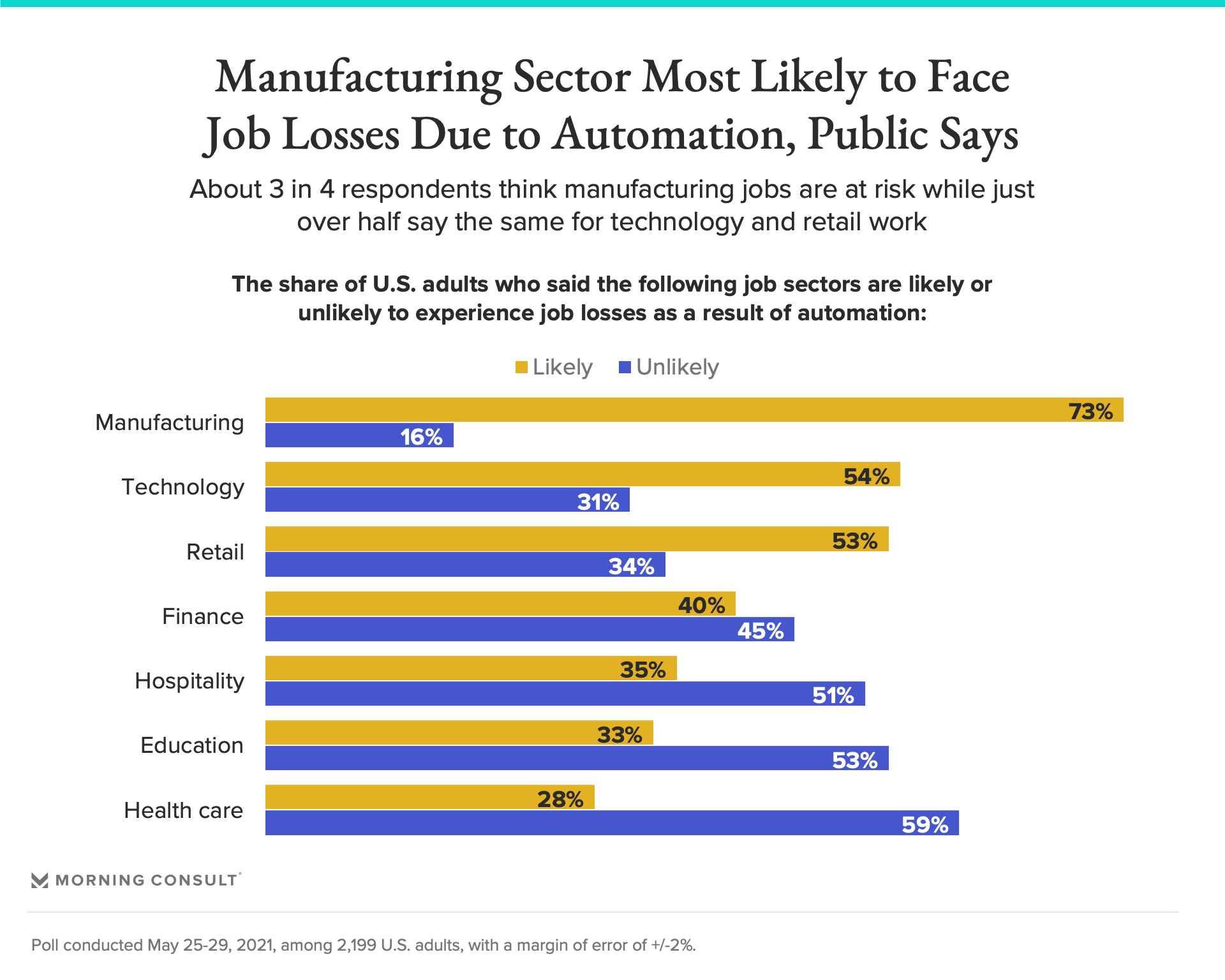 While manufacturing disruption and the resulting layoffs and plant shutdowns were the story of automation over a decade ago, the “focal points” now are in logistics work and fulfillment centers, Muro said.

The evolving nature of these new technologies is reflected in the data: While the share of adults across demographics who say they are likely to lose their job due to automation (about 1 in 5) has gone largely unchanged since 2018, there have been across-the-board declines in the shares of those who think it’s unlikely that they’ll lose their job and an increase in those who don’t know or have no opinion on the subject.

To guard against the drawbacks of automation, Jyotishi proposes trying to “double down in our investments in public community colleges” that provide training to the groups “most likely to bear the brunt of automation-enabled displacement.”

But non-degree credentialing programs, he cautioned, must avoid the path that leads “to no jobs or poverty-wage jobs” that are susceptible to elimination via automation, and look instead toward tech jobs of the future, such as those in data analysis, artificial intelligence and machine learning, software development and the Internet of Things.

“We need to make sure we have an upskilling infrastructure in place so that the folks who might be displaced aren’t left out to dry,” he said. “Especially the workers without college degrees.”