GOP Foes of ESG Investing Say It Puts Politics Over Profits. Yet Most Investors Don’t See It That Way

About 7 in 10 frequent investors said ESG investments are profitable 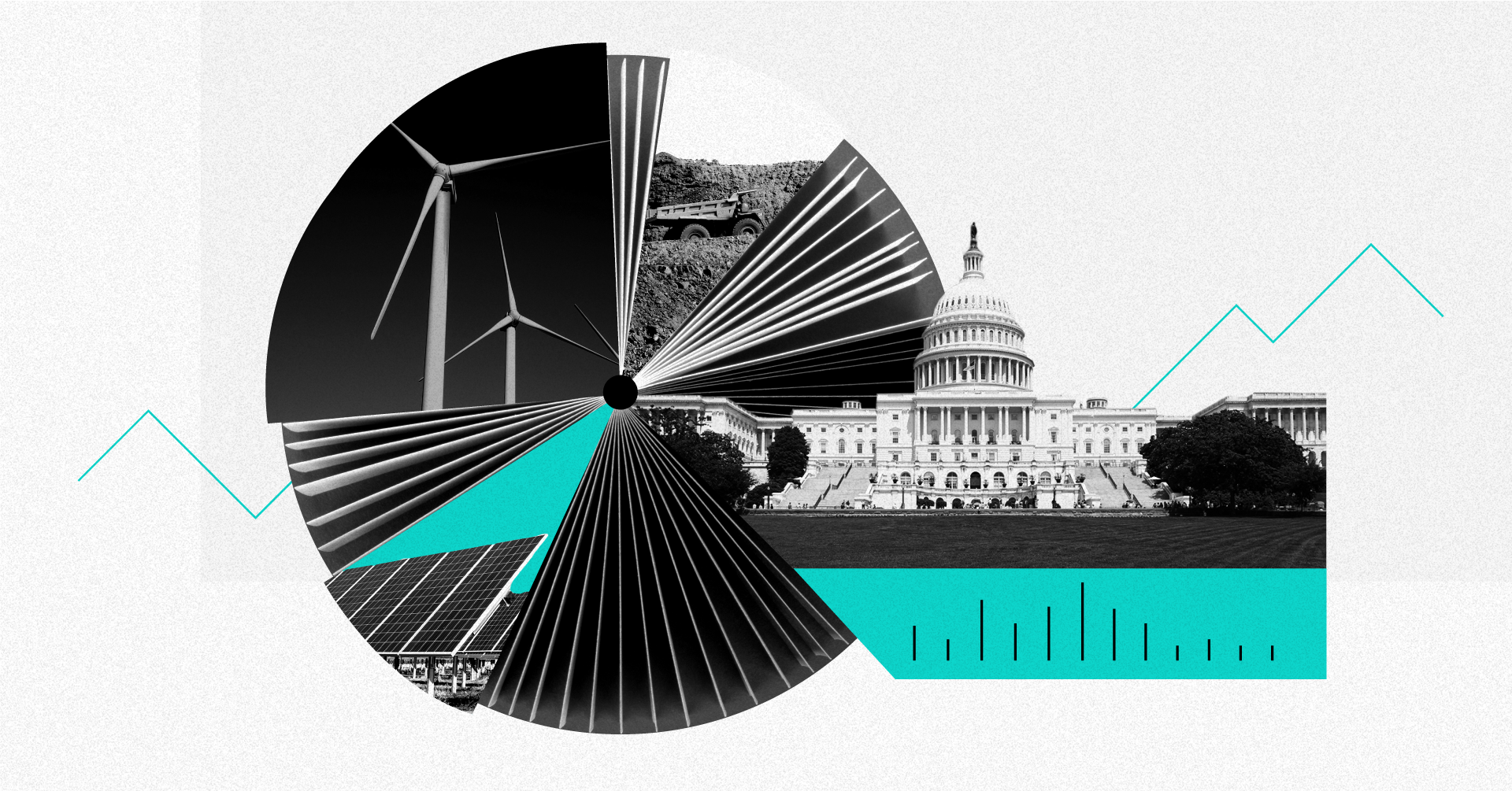 As the heads of financial regulatory agencies visited the White House on Monday to discuss the environment and the financial system, they discussed one of the biggest policy battles that is causing waves in Washington and in the private sector — mandating standard corporate disclosures on environmental, social and governance factors.

At the center of the debate: Is it good financial, rather than political,  practice for investment firms to have information on ESG factors, particularly on the company’s efforts to address environmental issues? While many in the financial industry argue that ESG is a growing sector that has a swell of retail investor support behind it, Republicans argue that it’s a way for Democrats and political activists to influence environmental policies while skirting Congress. 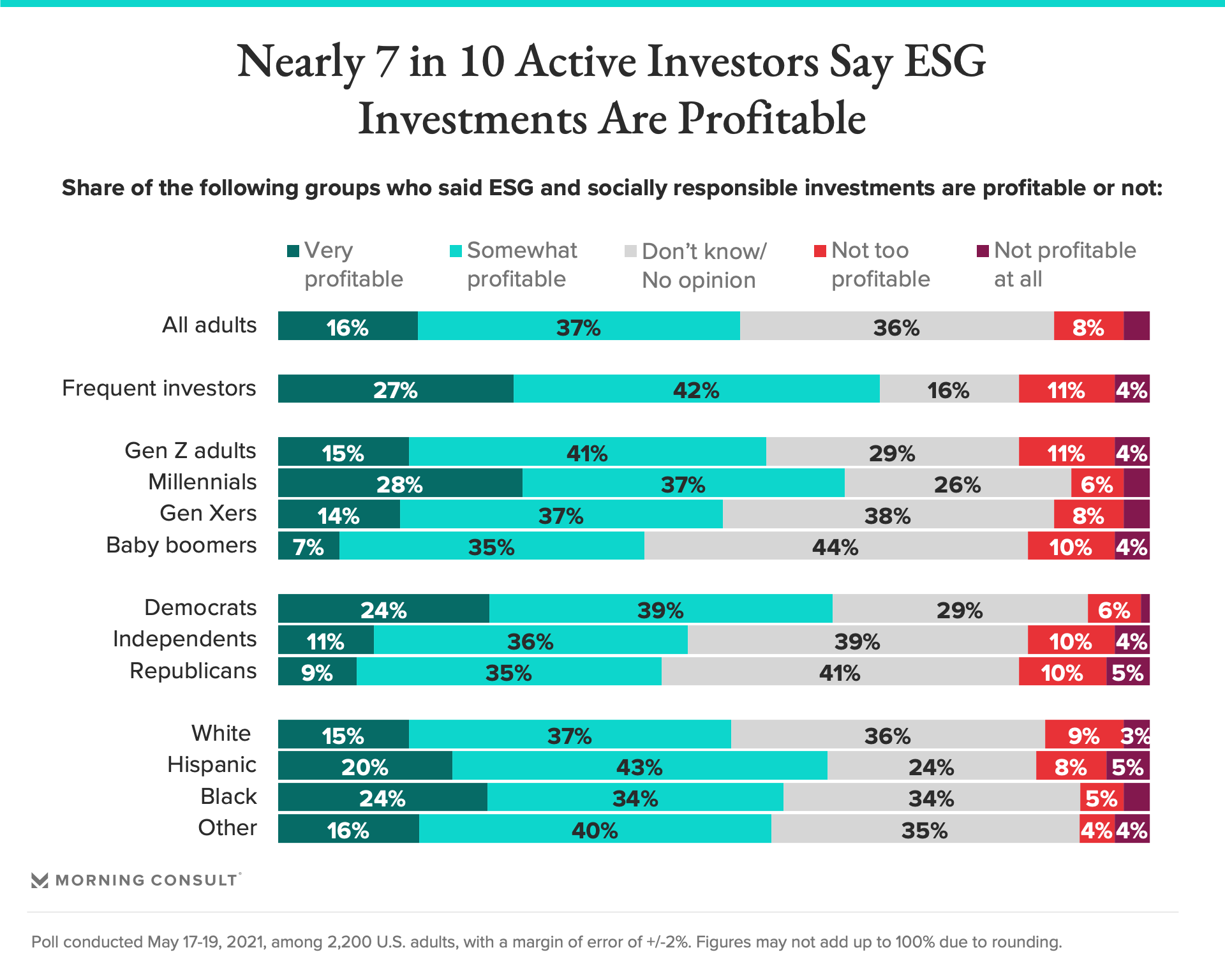 By and large, U.S. investors like what they see in ESG:  69 percent of frequent investors say ESG investing is “very” or “somewhat” profitable, according to a recent Morning Consult poll, while 15 percent say sustainable investing is “not too profitable” or “not profitable at all.” Frequent investors are defined as those who said they very or somewhat frequently invest in stocks, mutual funds, private equity, cryptocurrencies, exchange-traded funds, bonds, commodities, flip real estate or unstructured products.

Their responses compare with 53 percent of all U.S. adults who say they believe ESG investments are profitable and to 11 percent who say they are not.

Frequent investors are no bunch of granola-loving hippies, either. They also are more likely to say that it’s important for investors to make profitable investments (54 percent), according to the survey, than say it’s more important for them to make socially responsible ones (35 percent).

There are big generational gaps when it comes to ESG’s perceived profitability. Millennials are much more likely to say ESG investments are profitable at 65 percent, compared to their older peers — 51 percent of Gen Xers and 42 percent of baby boomers.

Related: For Those With an Opinion on ESG, Environmentally Friendly Investing Is Top of Mind

Political leanings also appear to make an impact on ESG views: 63 percent of Democrats said these types of investments are profitable, while 47 percent of independents and 44 percent of Republicans said the same.

Still, more Republicans said sustainable investing was profitable than not (15 percent). The poll was conducted May 17-19 among 2,200 U.S. adults and has a margin of error of 2 percentage points.

As for the financial industry, the reaction to ESG investing has been mixed, although some of the largest investment companies, including BlackRock Inc. and Blackstone Group Inc., have made large commitments to these investments.

The Investment Company Institute, the lobbying group representing regulated funds, argues that the disclosures that the Securities and Exchange Commission is weighing would help investors make more profitable decisions.

“From a financial point of view, there’s been increasing recognition that ESG, whether it be climate or diversity, actually does affect the value of companies,” said Eric Pan, the institutes’ chief executive. “It’s natural that they would want their investment portfolio to take into account those factors. So for our members, there’s a basic responsibility to investors.”

Rebecca Fender, who leads the Future of Finance initiative at the CFA Institute and was previously a vice president at BlackRock, said these strong views on the profitability of ESG investment represent a “fundamental shift” in how people think about risk and ESG.

“It’s far more mainstream to think about how things like the environment are going to affect a company on a systemic level, and I don’t think that’s going away,” she said.

To be sure, there is research that shows that ESG funds are not necessarily more profitable. And, as the data on GOP adults reflects, many Republican lawmakers argue that these investments are politically driven rather than profit driven.

There’s a tiny share in the U.S. public who thinks along similar lines: Of those who had an opinion on ESG investing, 2 percent said that companies shouldn’t weigh into political issues, often citing “wokeness” or “socialism,” according to a previous Morning Consult analysis of open-ended responses.

“If a company believes its owners need or want financially irrelevant information about global warming, political spending, or any ESG-related topic, they are free to disclose it,” Sen. Pat Toomey (R-Pa.), ranking member of the Senate Banking Committee, said by email. “But the SEC should not misuse its authority to force publicly traded firms to disclose non-material information simply because politically motivated investors demand it.”

He argued that there “little to no evidence” showing ESG investing produces higher returns and that a government mandate for such disclosures “will ultimately harm investors both by discouraging companies from going public and by undermining the quality and reliability of the SEC’s disclosure framework.”