In Much of the West, Public Places Most Trust in WHO for COVID-19 Origin Information

At least 2 in 3 adults in these Western nations support U.S. probe into coronavirus origins 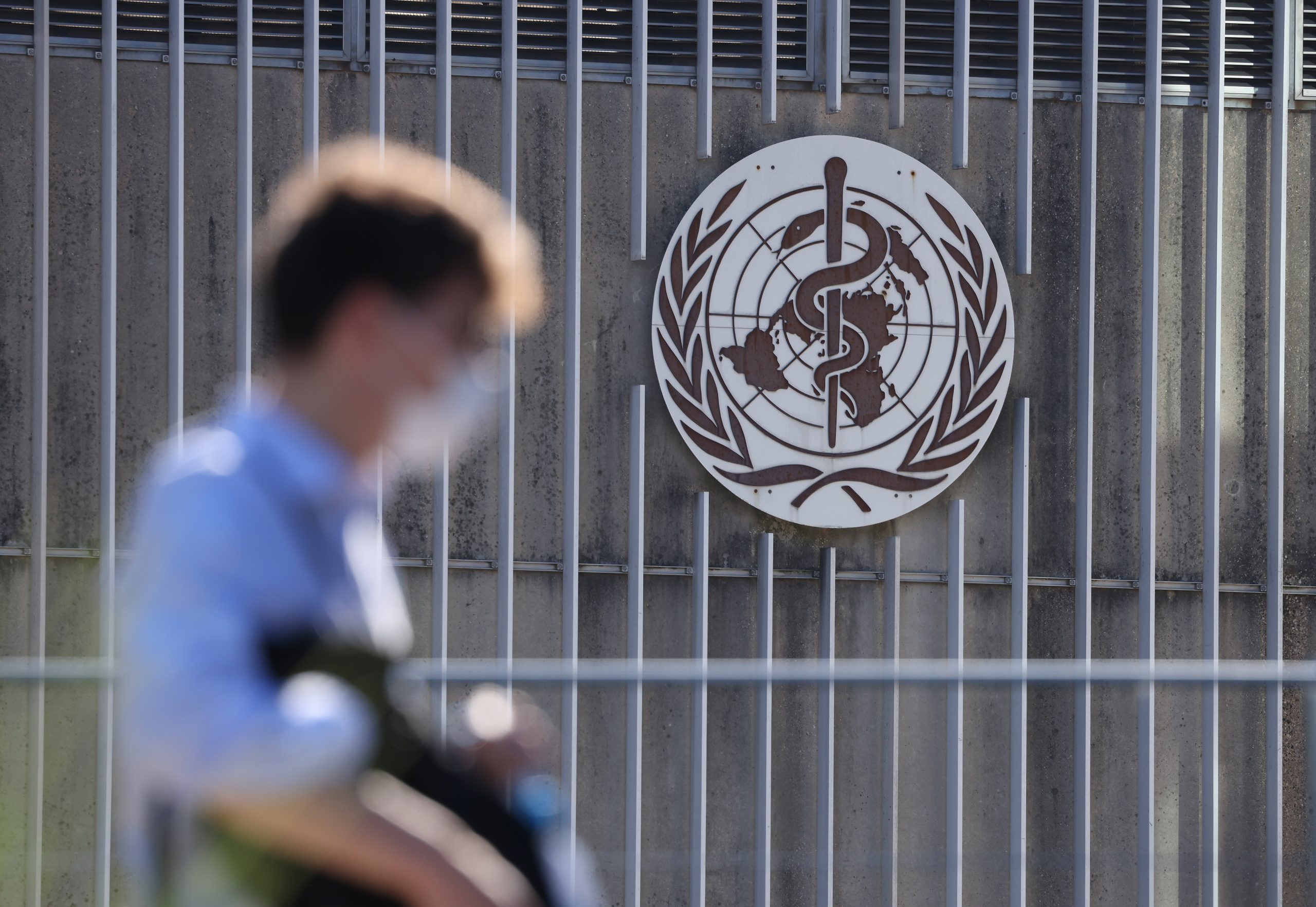 A man enters the headquarters of the World Health Organization on June 15, 2021, in Geneva, Switzerland. Between 51 percent and 69 percent of adults in seven international countries said they trust the WHO either a lot or somewhat about the origins of the pandemic, according to a Morning Consult poll. (Sean Gallup/Getty Images)
By Gaby Galvin

The World Health Organization’s first report from its probe into the origins of the COVID-19 pandemic landed with a thud in late March, providing few concrete answers about how the virus that has killed nearly 3.9 million people globally first began spreading. Then new details emerged about flaws in the investigation, and world leaders began calling for a second international study, as recently as mid-June.

Yet despite the WHO’s early blunders, at least half of adults in six European countries and Australia still trust the international health body to be transparent and honest about the pandemic’s origins, according to new Morning Consult polling that comes as the theory that the coronavirus began spreading after an accident at a Chinese lab gets a closer look.

Between 51 percent and 69 percent of adults in the seven countries surveyed said they trust the WHO either a lot or somewhat, and the public placed greater confidence in the WHO than other organizations. In an earlier survey, U.S. adults placed relatively equal trust in the WHO and American intelligence agencies, at 56 percent and 55 percent, respectively. 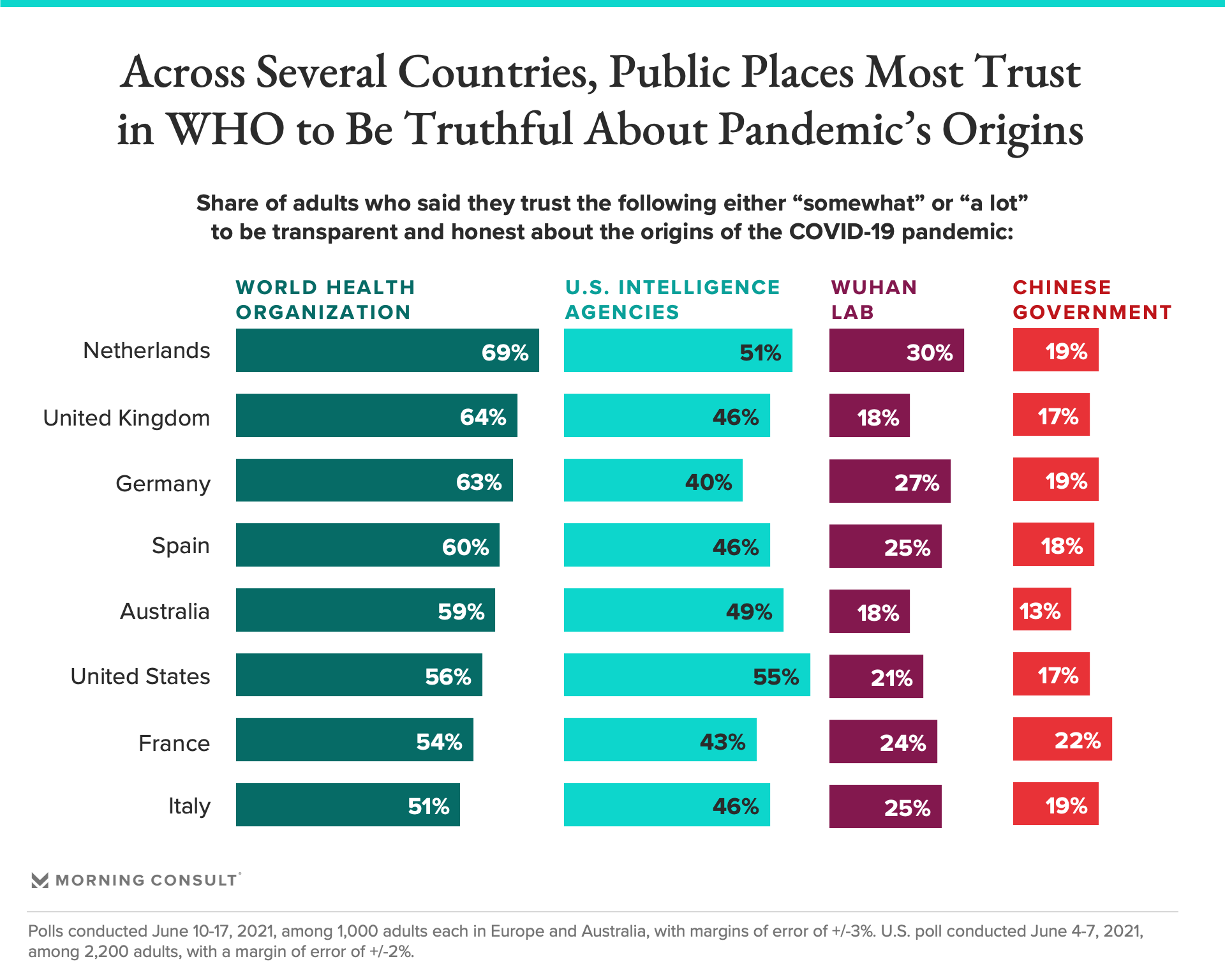 In the other nations, trust in U.S. intelligence agencies ranged from 40 percent in Germany to 51 percent in the Netherlands, while roughly 1 in 5 people across the countries surveyed said they trust the Chinese government to be transparent about the pandemic’s origins. In most countries, the public was slightly more likely to trust the Wuhan Institute of Virology than the Chinese government.

Morning Consult polled 1,000 adults in Australia and each European country from June 10-17, with margins of error of 3 percentage points. The U.S. poll, which has a 2-point margin of error, was conducted June 4-7 among 2,200 adults.

“There is strong suspicion of China, strong skepticism around its stonewalling and its unwillingness to be transparent,” said J. Stephen Morrison, director of the Global Health Policy Center at the Center for Strategic and International Studies. “The WHO remains a highly respected organization across low- and middle-income countries in the world, and I think it’s true in much of Europe, as well.”

Group of Seven leaders called for a new probe into the pandemic’s origins earlier this month, after the WHO’s first investigation turned up scant evidence that the virus transferred from an animal, possibly a bat, to people. The lack of answers, due in part to China’s lack of cooperation, coupled with reports that lab workers fell ill around the time the virus began spreading prompted scientists to revisit the lab leak theory.

The hypothesis, which has been a hot-button political issue in the United States for more than a year, has also gained traction abroad, the survey found. In every country except the Netherlands, adults were more likely to think the virus spilled from a Chinese lab instead of spreading naturally from animals to humans.

That margin was widest in France, where 56 percent of adults believe the virus came from a lab and 15 percent think it spread from animals, and narrowest in Germany, where the public was nearly split on the pandemic’s likely origins. Adults were the most likely to say they don’t know or have no opinion about the issue in the Netherlands, France and the United States. 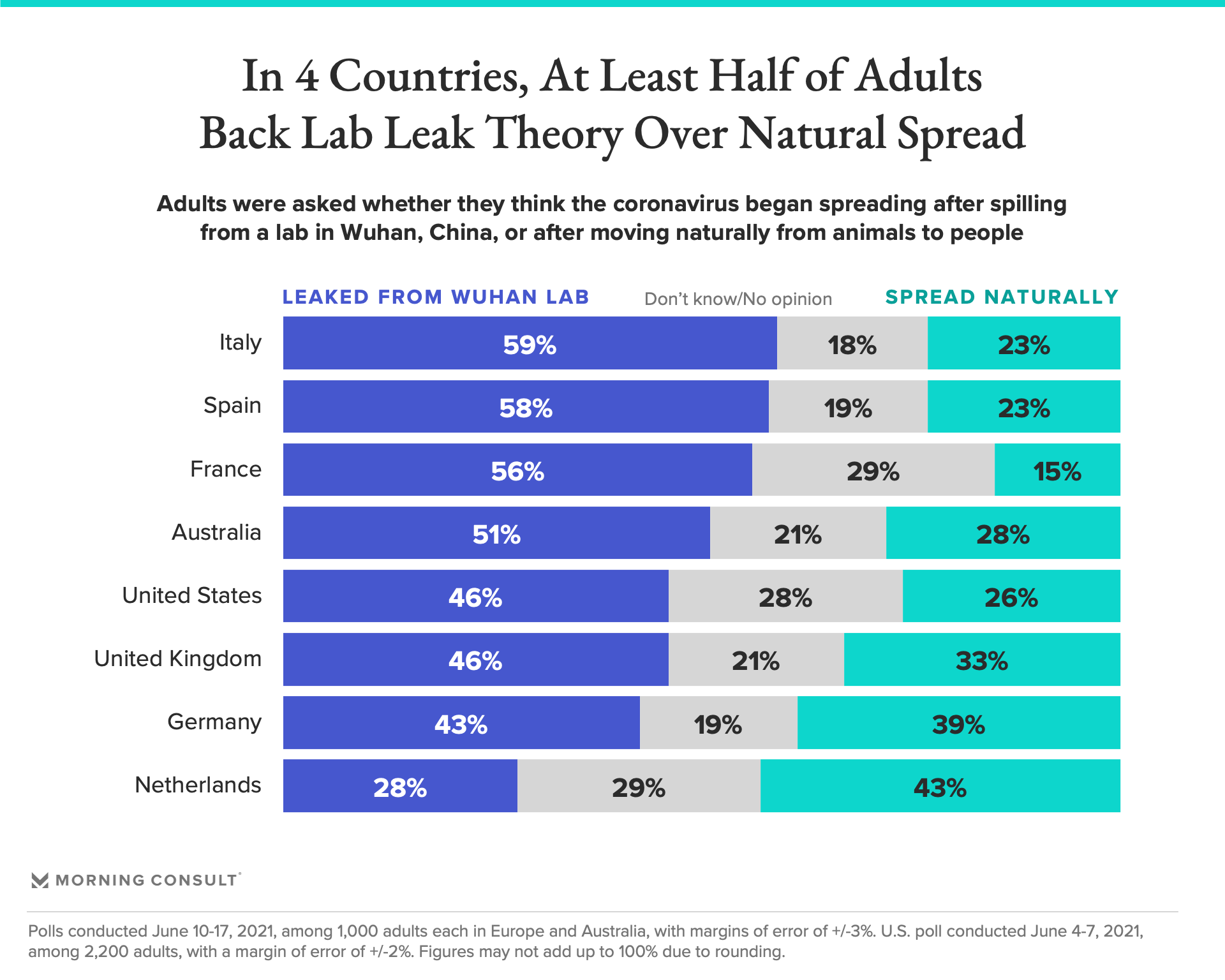 Morning Consult identified similar trends in the United States: 46 percent of U.S. adults said they believe the virus first spread from a Chinese lab, while 26 percent said it likely transferred naturally from animals to humans. There was a wide partisan divide, with Republicans largely backing the lab leak hypothesis and Democrats more likely to believe the zoonosis theory.

“Most of the world is not operating in as quite a contested and polarized environment as we are here,” Morrison said. And while the lab leak hypothesis itself is legitimate, exaggerations of the level of evidence behind the theory — ranging from politically tinged to all-out conspiratorial — have “become a dominant feature of the opinion climate,” he said.

U.S. lawmakers are now trying to tamp down the politicization. The White House ordered U.S. intelligence agencies to assess the origins of the pandemic while it works with the WHO on its own probe, and bills have been introduced in both the House and the Senate to create a bipartisan panel, modeled after the 9/11 commission, to investigate the COVID-19 pandemic.

Despite the wariness around U.S. intelligence in some surveyed countries, the international public mostly backs that investigation, with levels of support that range from 67 percent in Germany to 82 percent in Italy.

“They’re supportive of taking a serious, professional look at this,” Morrison said.

Related: As COVID-19 Origins Get Another Look, Nearly Half of the Public Backs Wuhan Lab Leak Theory
Coronavirus Coronavirus Origins