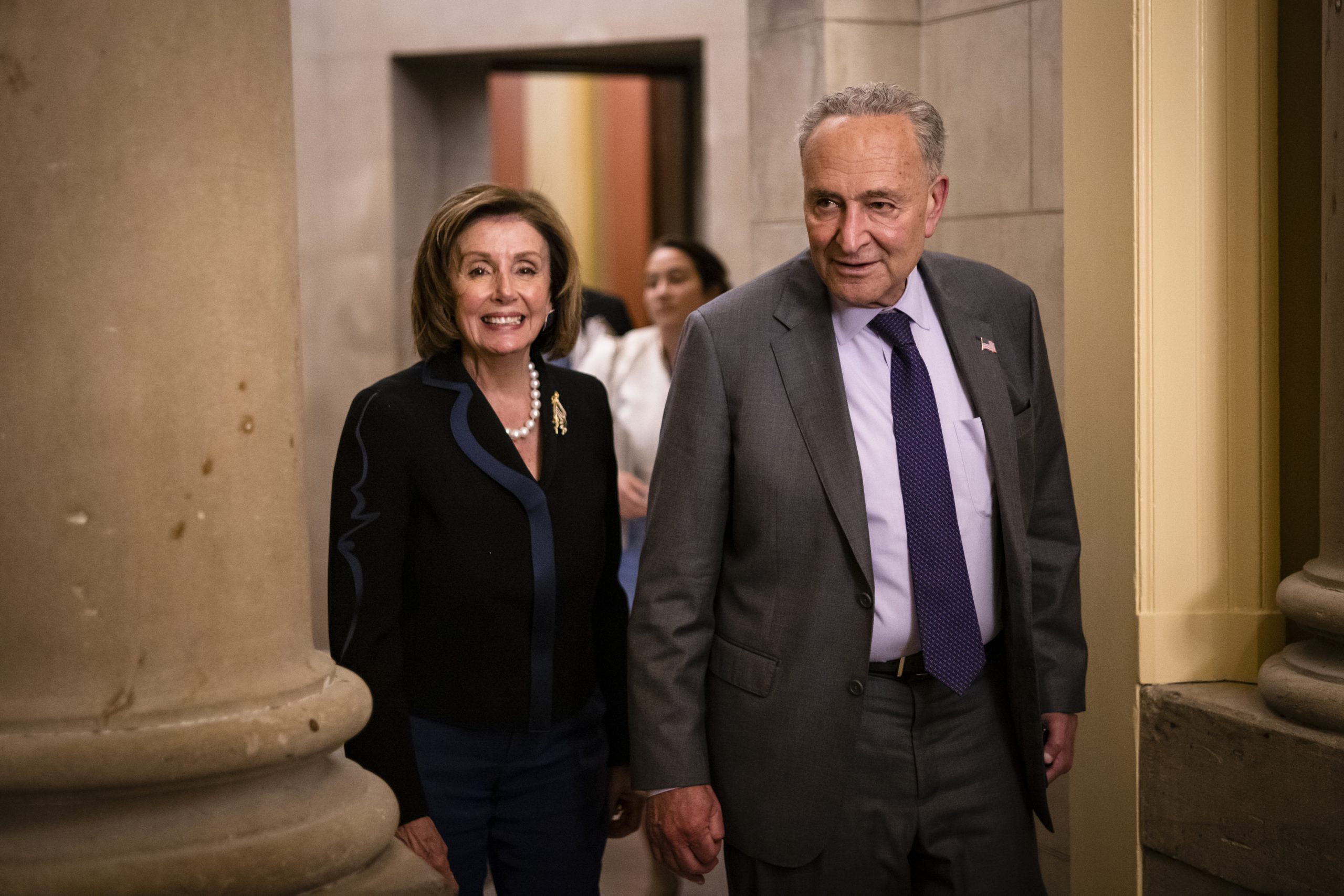 Speaker of the House Nancy Pelosi (D-Calif.) and Senate Majority Leader Chuck Schumer (D-N.Y.) emerge from the Speaker's office after a bipartisan group of senators and White House officials came to an agreement over the Biden administration's proposed infrastructure plan at the U.S. Capitol on June 23, 2021, in Washington, D.C. (Samuel Corum/Getty Images)
By Gaby Galvin

Voters largely back a handful of health care priorities that congressional Democrats are debating whether to include in a partisan legislative package later this year, new Morning Consult/Politico polling shows.

As talks continue on the imperiled bipartisan infrastructure bill, Democrats are also fighting for their priorities to be included in a separate package they plan to enact via budget reconciliation, a process that allows legislation to pass with a simple majority — which Democrats narrowly hold. That’s where most health care provisions are expected to land, and lawmakers are working on a flurry of proposals tied to health coverage, drug costs and services for older adults.

In the new poll, registered voters were asked about six of the health care proposals Democrats are floating, and the survey results showed that over half of the electorate supports each of them, though enthusiasm varies and some measures are more politically divisive than others.

Other ideas — expanding home health services for seniors; lowering the Medicare eligibility age to 60; allowing the federal government to negotiate prices for prescription drugs covered by Medicare; and creating a health coverage option for low-income people in states that have not expanded Medicaid — fell somewhere in the middle, with overall voter support ranging from 61 percent to 77 percent. 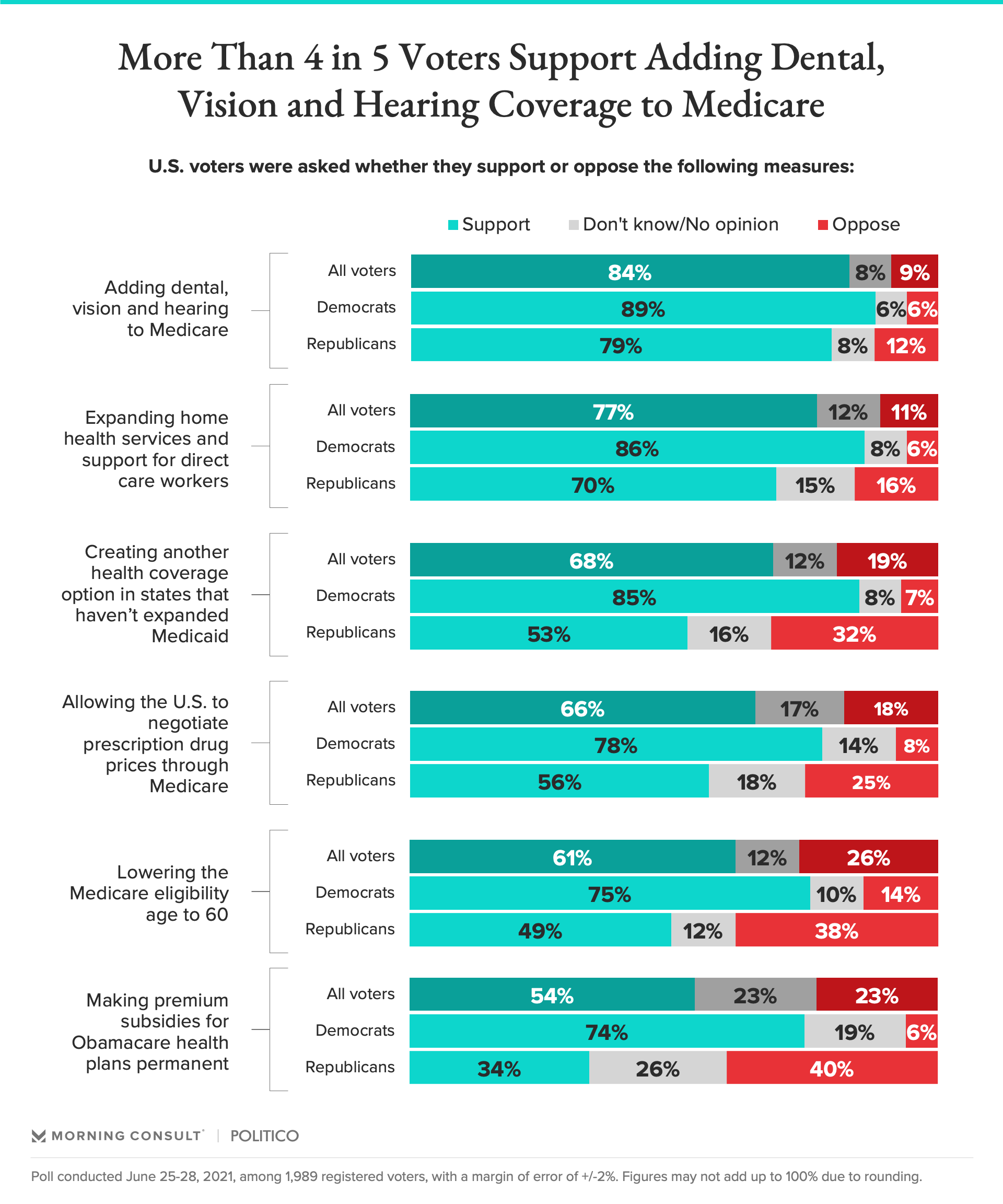 Notably, 70 percent of Republican voters are in favor of expanding home and community-based services for seniors and increasing support for the direct care workforce. Biden requested $400 billion for such services in his initial infrastructure plan, but it was ultimately cut out of the narrower bipartisan deal.

Democrats have said they plan to include funding for home health services in their budget reconciliation bill, although it, and the rest of the health measures included in the survey, have varying odds of passing Congress for reasons both procedural and political. Democrats are far from aligned on their priorities, and it would be difficult to include costly initiatives like adding dental, vision and hearing to Medicare without also passing measures that could save money, like allowing the federal government to negotiate prescription drug prices.

That’s a priority for House Speaker Nancy Pelosi (D-Calif.) and Senate Finance Committee Chair Ron Wyden (D-Ore.), but Medicare price negotiation is fiercely opposed by the pharmaceutical industry, which would see a blow to its revenues, and by congressional Republicans, who say it could stifle innovation and point to federal estimates that suggest negotiation could lead to fewer drugs coming to market.

Despite the attention Medicare price negotiation has received on Capitol Hill in recent months, Republican voters are less opposed to it, at 25 percent, than they are to some of the other Democratic health priorities, including lowering the Medicare eligibility age to 60 and making premium subsidies for Obamacare health plans permanent. Thirty-eight and 40 percent of Republicans opposed those measures, respectively.

The poll was conducted June 25-28 among 1,989 registered voters and has a margin of error of 2 percentage points.