2 in 5 Voters Are Confident an Infrastructure Budget Bill Can Pass. Just as Many Say It’s a Long Shot

With climate action hanging in the balance, lawmakers on the left are planning for a second infrastructure package to pass via reconciliation 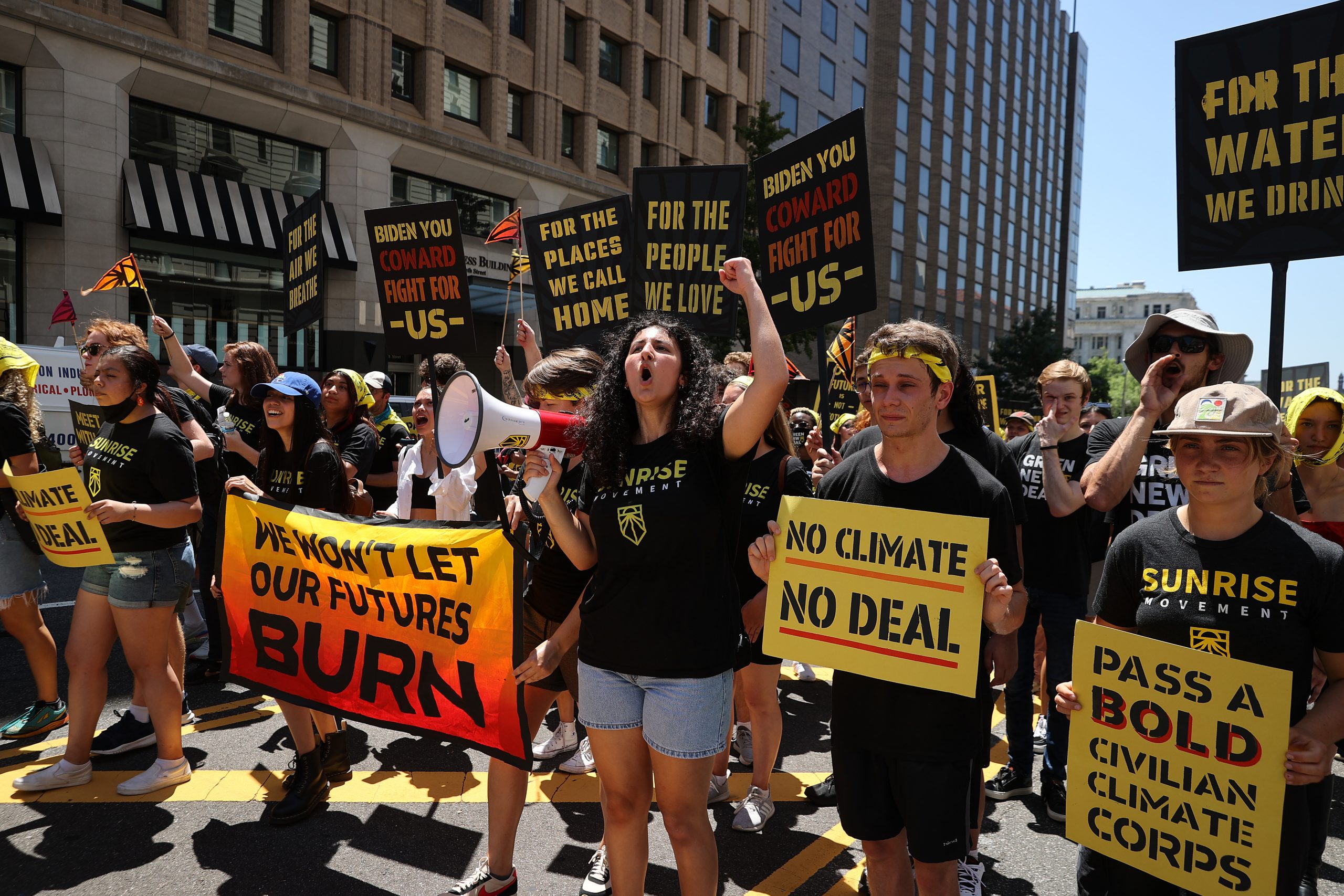 Hundreds of climate activists march to the White House on June 28, 2021, in Washington, D.C., calling on President Joe Biden to pursue an “infrastructure package that truly invests in job creation and acts to combat the climate crisis.” Forty-two percent of voters said they are confident a second package would pass, while 40 percent said they are not confident, according to new Morning Consult/Politico polling. (Chip Somodevilla/Getty Images)
By Lisa Martine Jenkins

While President Joe Biden seems to have a grand plan to get his infrastructure priorities through Congress, voters are split on whether they think he can pull it off. The second part of his legislative gambit in particular is in question: a reconciliation bill that would fund a number of his policy priorities — mostly social benefits ensconced in the American Families Plan, though potentially climate action as well — and pass with a simple majority.

New polling from Morning Consult and Politico found that 40 percent of voters are confident that a second part of the infrastructure plan will pass, while 42 percent say they are not confident. Nineteen percent do not know or have no opinion. 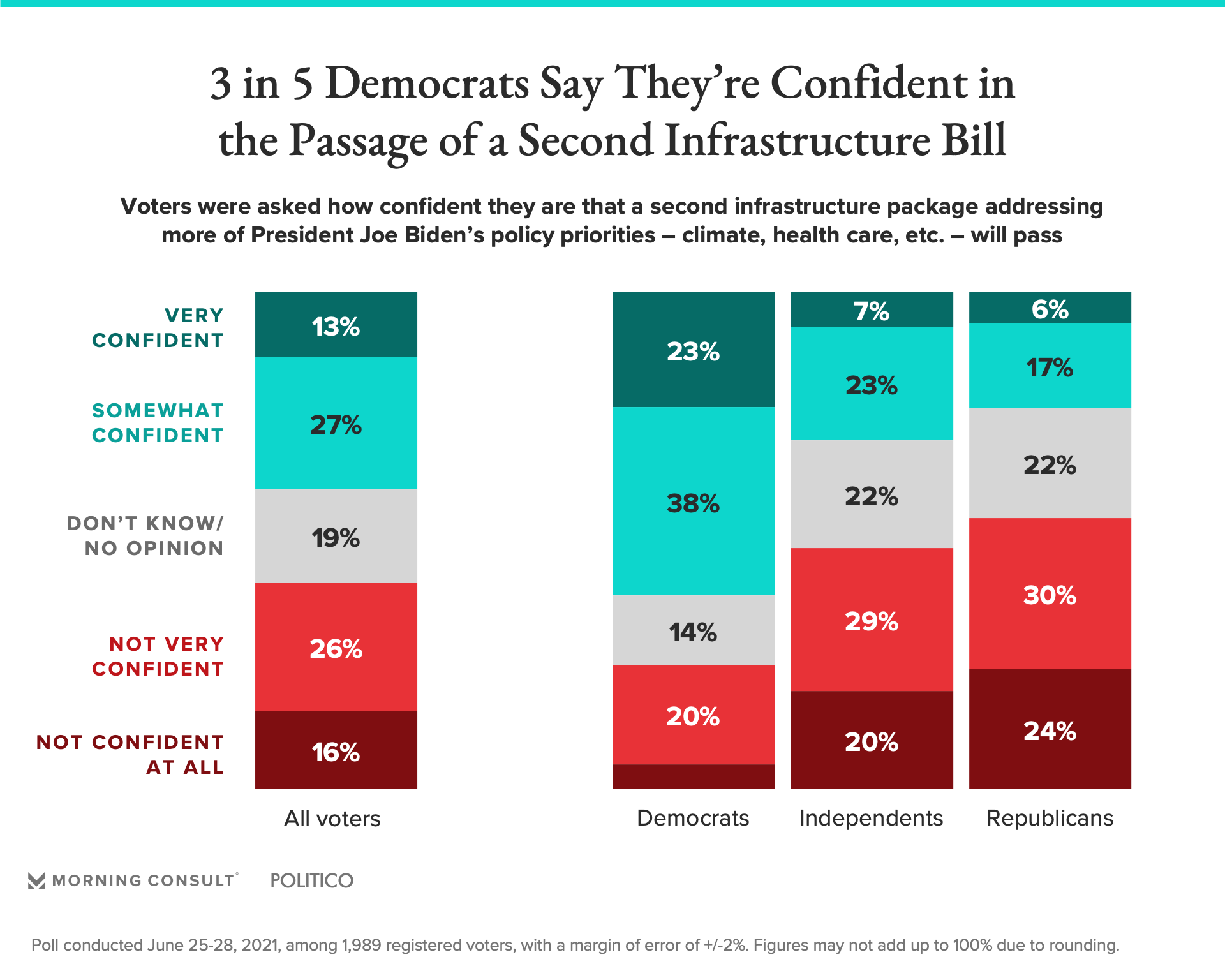 For the lawmakers invested in taking urgent action on climate change, the fate of the reconciliation bill is paramount. The first infrastructure agreement — reached by a bipartisan group of senators late last week — omits many of the major climate-focused elements of the American Jobs Plan and other Democratic proposals, including a clean energy standard, tax credits for renewable energy and a phaseout of subsidies for fossil fuels, among many others.

A number of lawmakers have said they will not vote for an infrastructure package without climate provisions, a fact that has contributed to Biden vocalizing his “two-track” plan, with both a bipartisan bill focused on physical infrastructure and a reconciliation bill including “social infrastructure” and other more progressive priorities. Reconciliation is a process that allows tax, spending and debt limit legislation to pass Congress via simple majority if both chambers agree to a budget resolution laying out “reconciliation directives” for committees.

Sen. Chuck Schumer (D-N.Y.) has reportedly instructed those drafting the initial budget resolution to make sure climate and energy provisions, which include tax credits designed to push the power sector to reduce their emissions 80 percent by 2030, are included, according to a Senate leadership aide with knowledge of the talks.

But while Democrats have the numbers to pursue the reconciliation process without any Republican support, lawmakers on the left are far from a homogenous bloc and their majority is slim. Coming up with a deal that will satisfy progressive, climate-focused Sens. Bernie Sanders (I-Vt.) and Ed Markey (D-Mass.) as well as moderates Joe Manchin (D-W.Va.) and Kyrsten Sinema (D-Ariz.) is easier said than done.

However, a majority of Democratic voters remain optimistic. Sixty-one percent say they are “very” or “somewhat” confident in a second bill’s ultimate passage, while 25 percent are not confident.

Related: GOP Foes of ESG Investing Say It Puts Politics Over Profits. Yet Most Investors Don’t See It That Way

But Republicans are less convinced, with over half (54 percent) saying they’re “not very” or “not at all” confident, and 23 percent of them are “very” or “somewhat” confident that a second package will pass. The June 25-28 poll ran over the course of a weekend when Republican lawmakers vocally expressed their opposition and outrage at the prospect of Biden’s “two-track” approach to passing infrastructure legislation (before the president issued a statement assuaging some of their concerns that he may veto the bipartisan bill).

Independent voters’ responses were closer to those of Republicans, with 30 percent confident and 49 percent less than confident in the Democrats’ ability to get infrastructure priorities passed through reconciliation.

Voters are just as split on what an infrastructure package — be it one-part or two-part — should encompass: 42 percent say the overall plan should exclusively focus on funding physical infrastructure needs, like fixing roads and bridges, and 41 percent say it should also include funding for social benefits such as child care, elder care, education and health care.

The latter set of priorities are likely to form the focus of the second bill pursued via reconciliation, though there is some discussion about tacking on climate and renewable energy provisions that did not make it into the first infrastructure bill.

The poll surveyed 1,989 registered voters and has a margin of error of 2 percentage points.