Economic activity, particularly consumption, is poised to accelerate during the second half of the year, but the process of matching unemployed workers with new employers will contribute to elevated employment churn over the course of the recovery, writes Morning Consult Chief Economist John Leer. 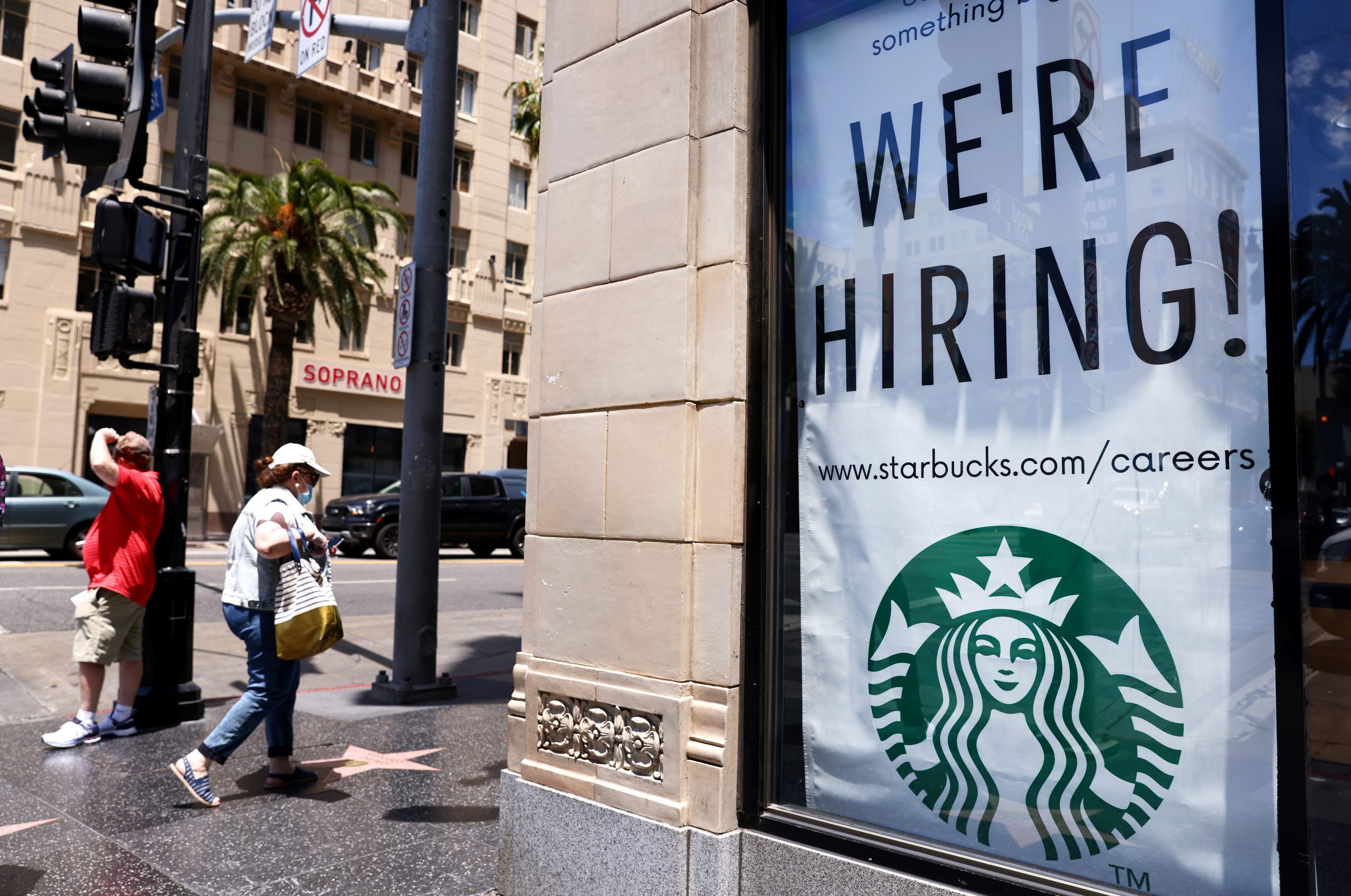 A Starbucks in Los Angeles is among the many employers looking for workers in June. Americans are starting to return to the labor market, but the jobs recovery is not as strong as many economists had expected, according to Morning Consult Chief Economist John Leer. (Mario Tama/Getty Images)
By John Leer

After a sluggish May, the U.S. economy laid the foundation in June for liftoff later this year. Americans are slowly going back to work and returning to look for work, but the rapid jobs recovery many economists expected remains elusive. Built-up savings will provide some consumers a backstop against prolonged unemployment, but a growing share of adults has already depleted the financial cushion provided by stimulus checks.

The near-term trajectory of the U.S. economy most critically depends on increasing employment, but noise in some of the traditional data sources obscures the underlying signal. 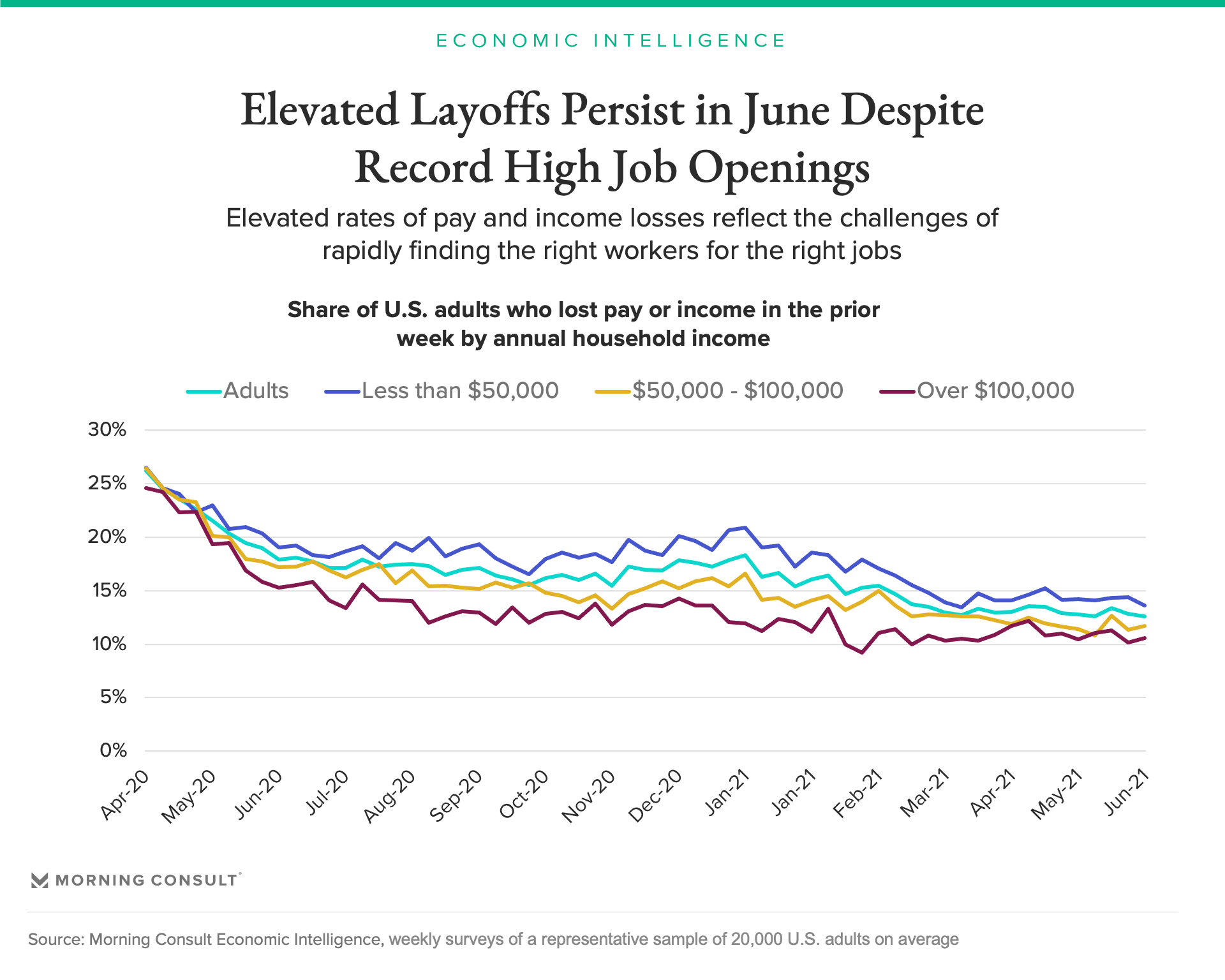 Employers and workers are likely to experience an elevated level of employment churn. The share of Americans experiencing a loss of pay or income remained essentially unchanged during the first three weeks of June, a trend likely to continue given the high number of workers forced to find new jobs. Don’t be fooled by falling weekly unemployment claims: A decrease in benefits and benefit eligibility is not the same as improving demand for workers.

While improvements in Morning Consult’s unemployment rate remained modest in June, the more significant development was the increase in labor force participation. More Americans are either working or looking for work, with most of the improvements coming from students and retirees. 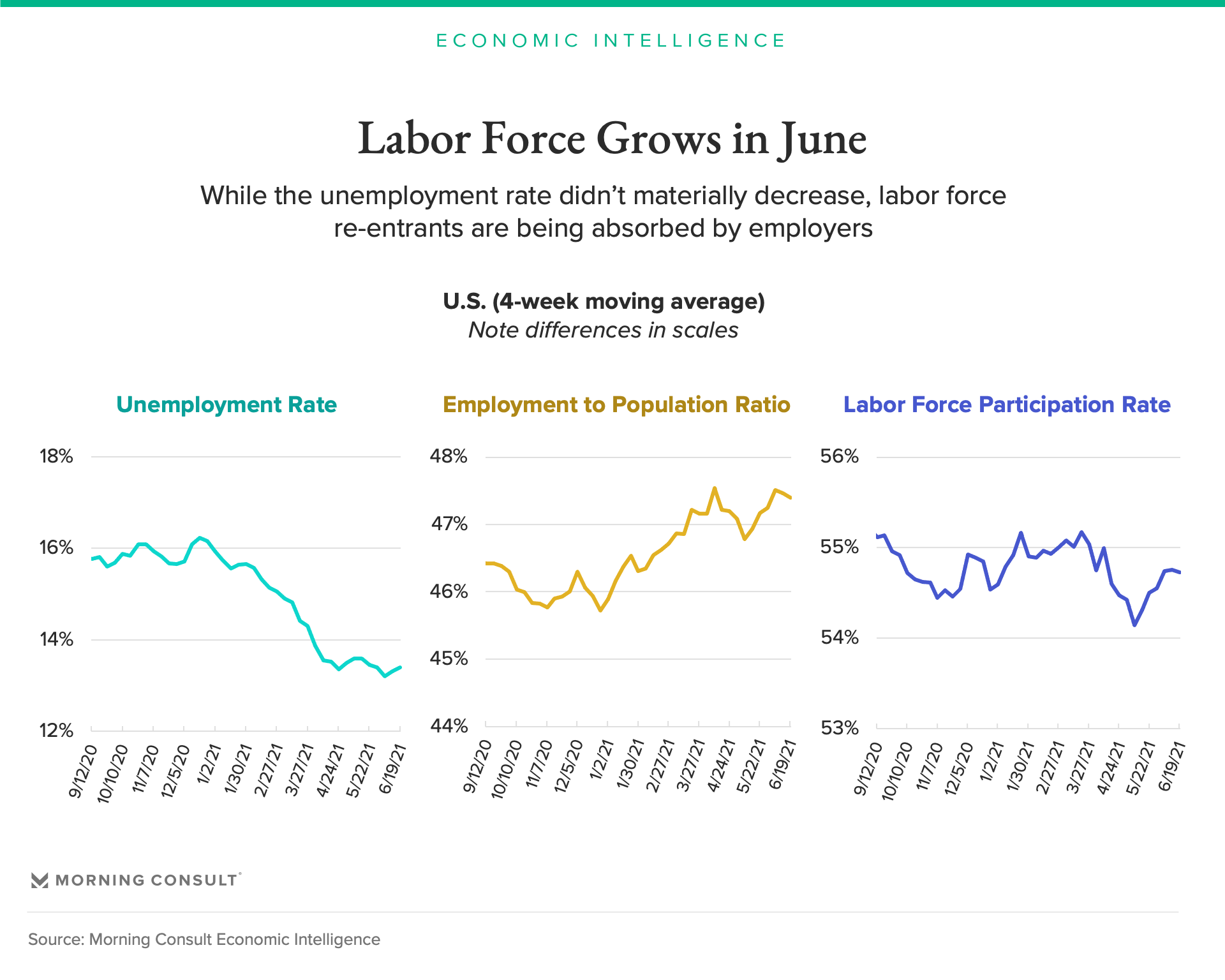 Morning Consult’s daily U.S. Index of Consumer Sentiment remained essentially unchanged over the course of the month, indicating that consumer spending and retail sales did not materially change in June. Looking ahead, consumers are unlikely to significantly revise their views of the economy or increase total spending until a greater share of Americans get back to work. High-income Americans are likely to divert a greater share of income to consumption rather than stockpile it as savings. For low-income consumers, the expiration of unemployment benefits may push some back to work, but it also risks decreasing the money flowing into the economy.

The most relevant trends in consumer spending will be in terms of how consumers allocate their wallet rather than adjustments to the total size of their wallets. Americans continue to grow more comfortable engaging in basic economic activities, particularly airline travel. Consumers are spending on trips and vacations rather than on automobiles and other durable goods. However, those cars and suburban houses that Americans purchased during the pandemic will leave a lasting impact on consumption patterns. Expect increased car-related spending and time spent outside urban areas to remain features of the economy even after the pandemic.

Americans’ personal finances remained strong in June, but the benefits from unprecedented fiscal stimulus have begun to erode. The share of Americans unable to pay their bills increased in May, leaving a greater share of consumers in June without adequate savings. As federal unemployment insurance benefits expire over the next three months, low- and middle-income workers are likely to continue to draw down their savings as they look for jobs. But high-income adults relied on credit card debt in May to finance their spending, yet another sign that they anticipate a steady income.

Read more from our July report on the U.S. economic outlook.