Why America’s Vaccine Holdouts Haven’t Gotten a COVID-19 Shot, in Their Own Words

This is the kind of person the Biden administration needs to persuade: “I’m afraid of dying just getting the shot” 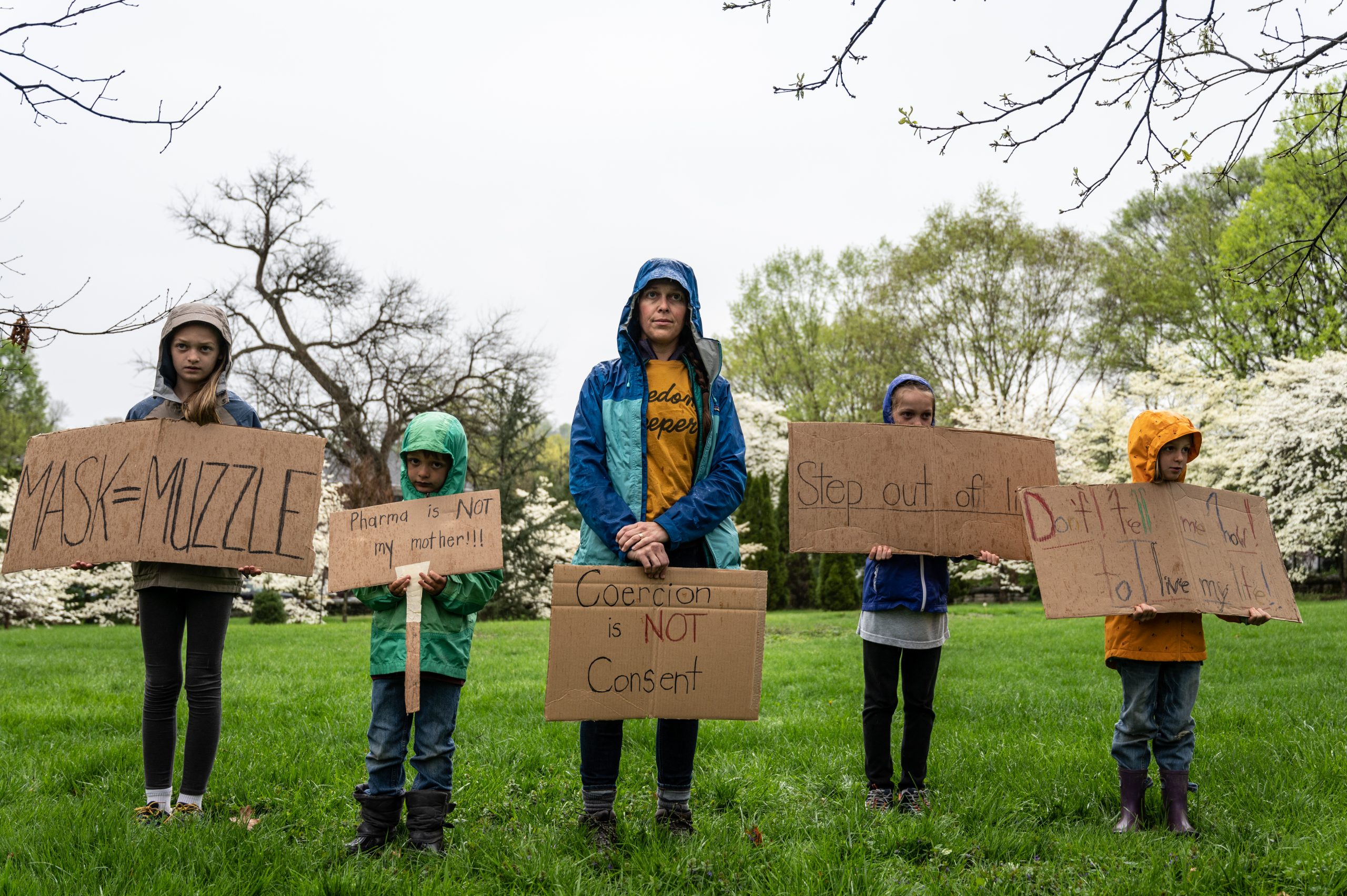 A mother and her children hold anti-vaccination and anti-COVID-19 mandate signs in protest on the Kentucky state capitol grounds on April 14, 2021, in Frankfort, Ky. (Jon Cherry/Getty Images)
By Gaby Galvin

“A loved one was fine until he gotten it so I blame it for the death,” one Gen Z adult said of the COVID-19 vaccine.

“I’m not going to be controlled by the government,” said a millennial.

“I think it was developed way too fast,” another Gen Zer said.

As the U.S. vaccination campaign dwindles, these are among the millions of vaccine holdouts the Biden administration will have to fight to win over.

The spread of the delta variant has U.S. health officials on high alert, but vaccinations are slowing across the country after a mad dash this spring. As of Tuesday, 66.2 percent of adults had gotten at least their first shot, shy of the White House’s goal of 70 percent by July 4. That failure underscores just how difficult it is to finish the last stretch of any public health campaign — and a new Morning Consult/Politico survey suggests many unvaccinated adults aren’t budging.

The survey asked 744 unvaccinated adults to describe in their own words why they’re skipping the shots. Roughly a quarter of respondents in the June 25-28 survey said they were worried about the safety or efficacy of the shots and another quarter said they didn’t trust the vaccine development process, findings that align with Morning Consult’s ongoing survey of vaccine willingness.

One respondent believes the shots were “produced to [sic] quickly, with an eye on politics,” for example, while another thinks there’s been “insufficient safety testing.”

Another 1 in 10 respondents cited conspiracy theories or misinformation about the vaccines, skepticism of drug companies or general anti-government or anti-vaccine sentiment.

Some believe the vaccine affects women’s fertility — a rumor that’s spread on social media but has no scientific basis — while others said they didn’t want to be “guinea pigs” for the shots, which have already been tested in large clinical trials. 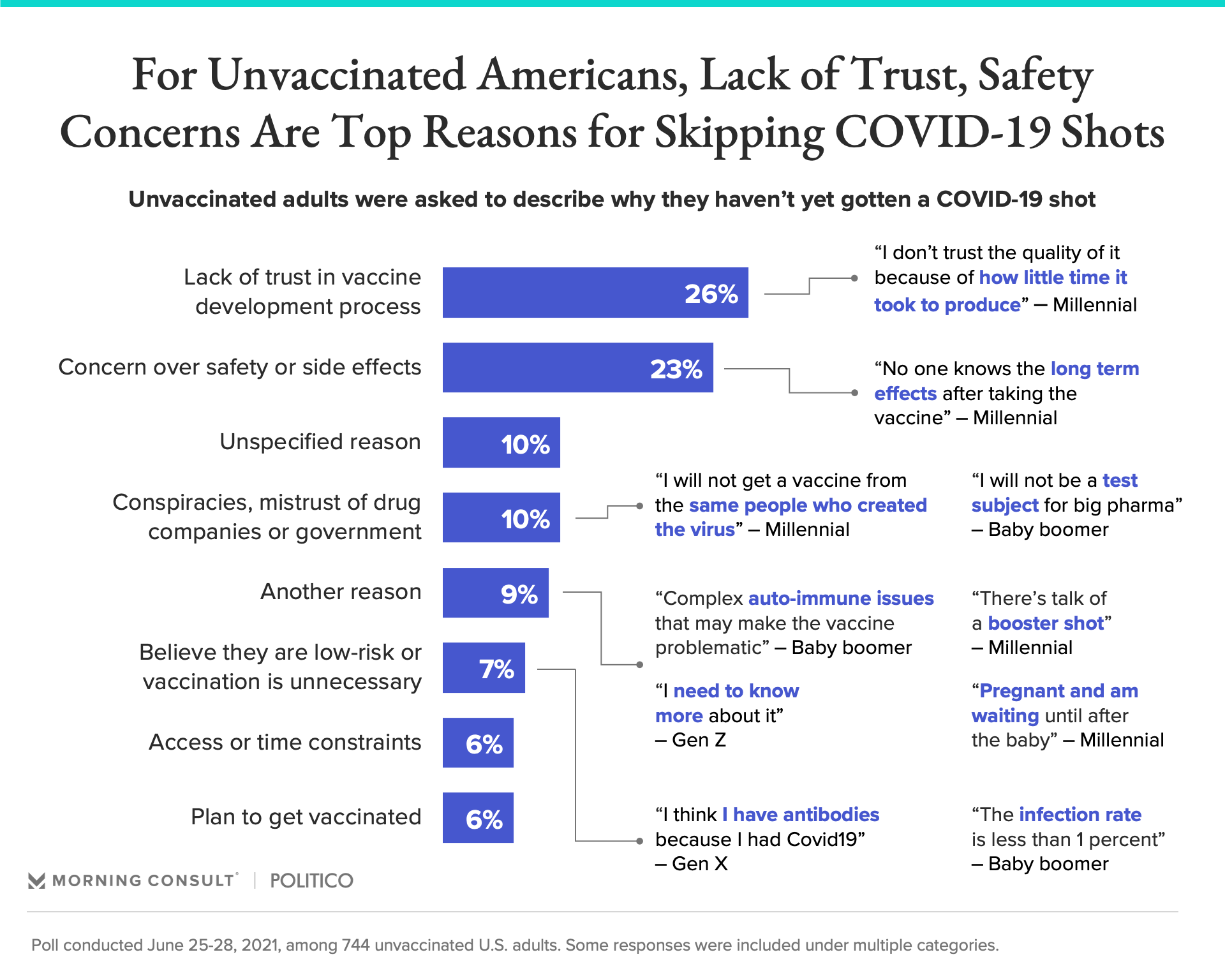 The public campaign to encourage vaccination has also made some Americans wary: “The fact that they’re offering money to take, tells me that something is wrong,” one respondent said. Another added they’re not getting vaccinated because of “the way the media and government are pushing it.”

Six percent of respondents said they haven’t had time to get vaccinated or access to the shots; another 7 percent said they don’t feel they’re at risk, perhaps because they’ve already had COVID-19. Six percent plan to get the shot but haven’t gotten around to it yet.

And the rest of the survey respondents either didn’t specify a reason or listed something else, like being pregnant and wanting to wait, or being turned off by the possibility that vaccinated people may need booster shots.

Many respondents cited multiple concerns, indicating an overall wariness of new vaccines that have been heavily politicized since the early days of the pandemic. People also ranged from ambivalent to wholly opposed to vaccination, underscoring that America’s holdouts don’t all fit neatly into the category of “vaccine hesitant.”

As the vaccination campaign continues, the Biden administration is shifting its strategy to target younger adults, who have been vaccinated at lower rates. About 48 percent of adults 18-24 have gotten at least their first shot, and White House officials have suggested that young people don’t think they’re at risk and don’t feel an urgency to get vaccinated.

The survey results show that explanation bears out for at least some young adults: One Gen Z respondent said they’re open to getting vaccinated, but “I do not see much of my family that I would put at risk, and I personally believe that I am not at risk because I have had Covid before.”