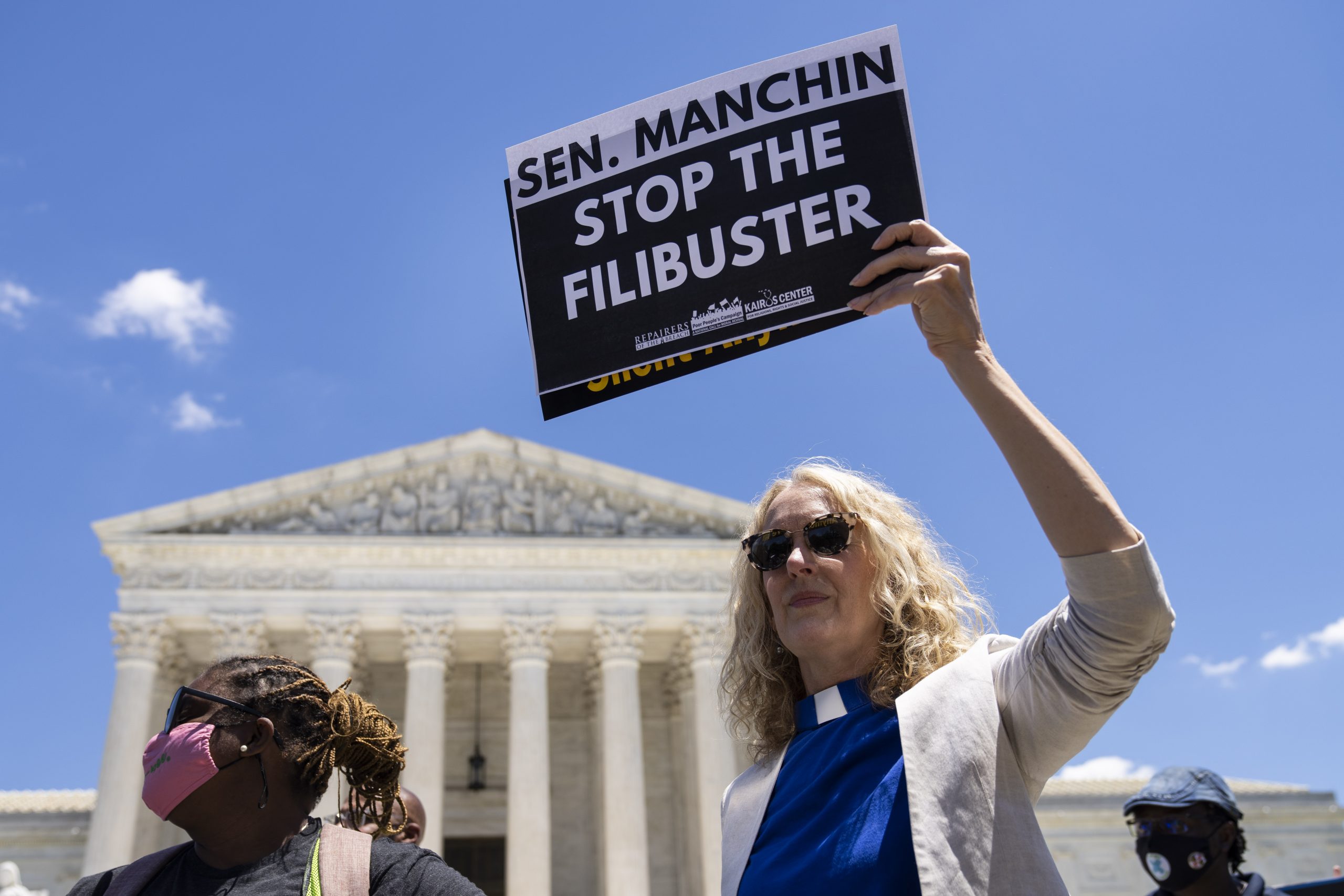 An activist calls on Democratic Sen. Joe Manchin of West Virginia to back the elimination of the legislative filibuster and pass the "For The People" voting rights bill outside the Supreme Court at a June 23 rally organized by the Poor People's Campaign. Recent polling shows roughly a quarter of Democratic voters say congressional Democrats have accomplished less than they expected so far. (Drew Angerer/Getty Images)
By Eli Yokley

Democrats in Washington can point to a litany of accomplishments for their first six months in full control of the White House and Capitol Hill, from stocking the Biden administration with successful nominations to striking Trump-era rules and the passage of a historic COVID-19 relief package.

But for at least a chunk of the Democratic base, that’s not enough as President Joe Biden’s jobs and social spending plans and several other key agenda items remain stalled in the narrowly divided Senate. That sense of dissatisfaction may cause some heartburn for the party’s organizers, who are hoping to tout the party’s early accomplishments in order to keep the base united and enthusiastic going into the 2022 midterm elections, and highlights the stakes as House and Senate negotiators look to deliver on Biden’s sweeping infrastructure and social spending proposals.

According to a Morning Consult/Politico poll conducted June 25-28, 1 in 4 Democratic voters (24 percent) said Democrats in Congress have accomplished less than they expected them to at this point. Roughly the same share said the party has accomplished more on Capitol Hill than expected, and a plurality (37 percent) said their expectations have so far been met. 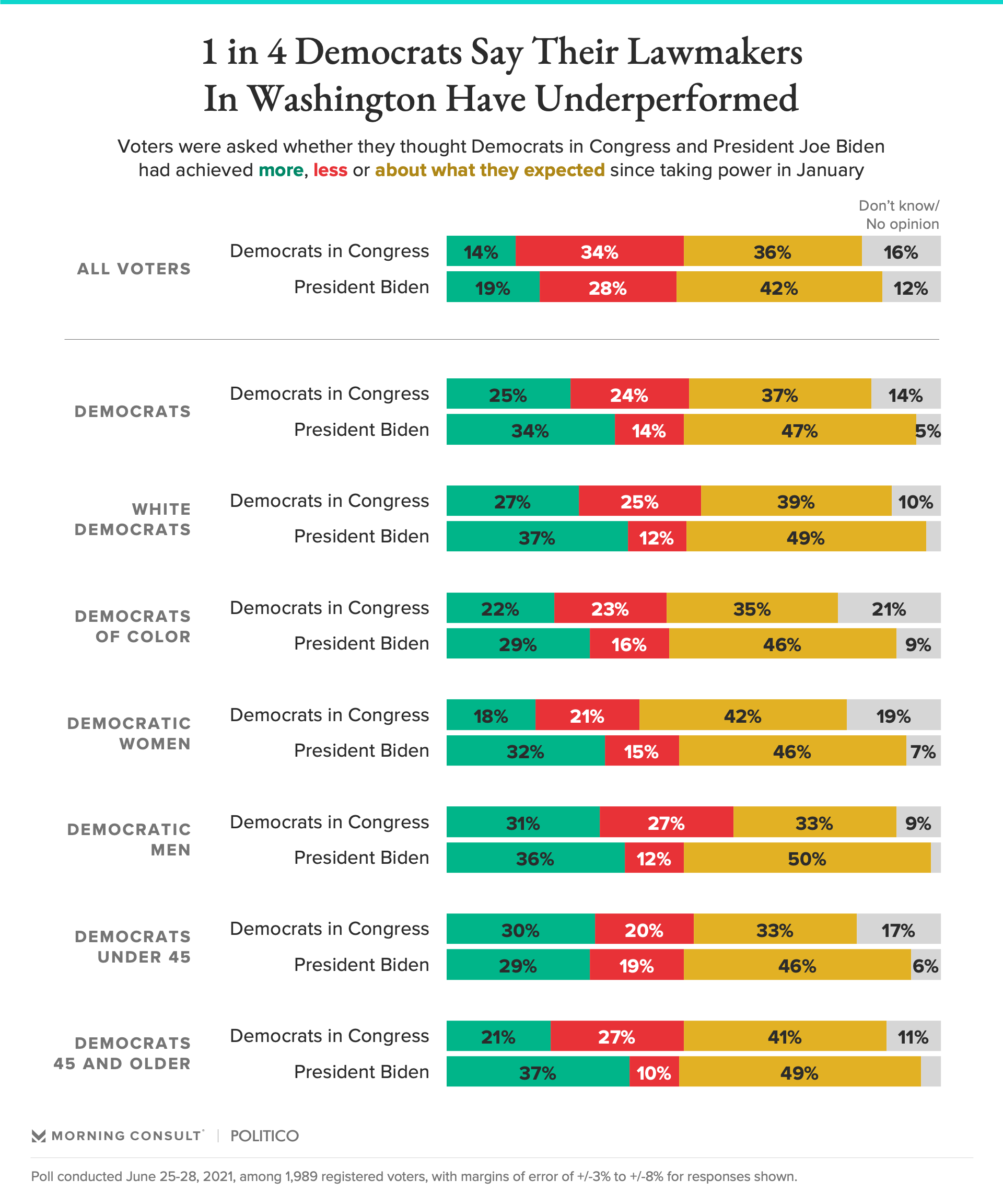 As has been the case with other metrics of public opinion in Biden’s Washington, such as favorability ratings or issue polling, voters – and especially Democrats – are giving the president better reviews than his collaborators on the left side of the aisle.

In the survey, Democratic voters were 10 percentage points less likely to express disappointment about Biden’s early tenure than they were to say the same about the first few months of Democrats’ full control of Congress. That trend persists when accounting for race and ethnicity, as well as gender, while Democrats under the age of 45 are less likely to differentiate between Biden and Democrats in Congress when it comes to positive and negative sentiment.

For some on the left, the disappointment from part of the Democratic electorate is a sign that the party shouldn’t shy away from going big over the coming months.

“I think this points to the need to ensure we keep the number on the American Jobs Plan and American Family Plan high, and ensure energy innovation, home-based health care and a permanent child tax credit stays in the bill,” said Sean McElwee, a progressive pollster at Data for Progress whose work has the ear of the White House, in a reference to the brewing negotiations over the president’s sweeping infrastructure proposals.

McElwee said the data also highlights the need for a more aggressive sales job: In his polling, half of voters were unaware that child tax credit payments would start hitting their pocketbooks this summer, mirroring Morning Consult polling conducted earlier this year that found the COVID-19 package was best known for its stimulus checks despite sizable support for most of its other provisions.

Related: How Popular Is the Senate Filibuster? It Depends on How You Talk About It

That kind of pitch has already been the focus of groups such as Building Back Together, a super PAC supporting Biden’s agenda, and is likely to ramp up as the midterms – still 70 weeks away – draw closer. For now, Biden and Democrats in Congress remain more popular than their Republican counterparts among both the overall electorate and their respective bases.

Democratic strategist Patrick McHugh, a former executive director of the Democratic super PAC Priorities USA, said he takes solace in the fact that Democrats in Congress have at least met most Democratic voters’ expectations despite threadbare majorities that have made it difficult to pass House agenda items in the Senate. And he noted there’s room to move minds among the 14 percent of Democrats (and 16 percent of the overall electorate) who have yet to form opinions on the majority party’s success.

“Democrats clearly need to keep their foot on the gas, as they have been doing, to get things done for the American people, and proactively communicate to voters about those accomplishments,” he said.