As Congress Cools Its Public Option Ambitions, a Proxy Fight Is Playing Out in the States 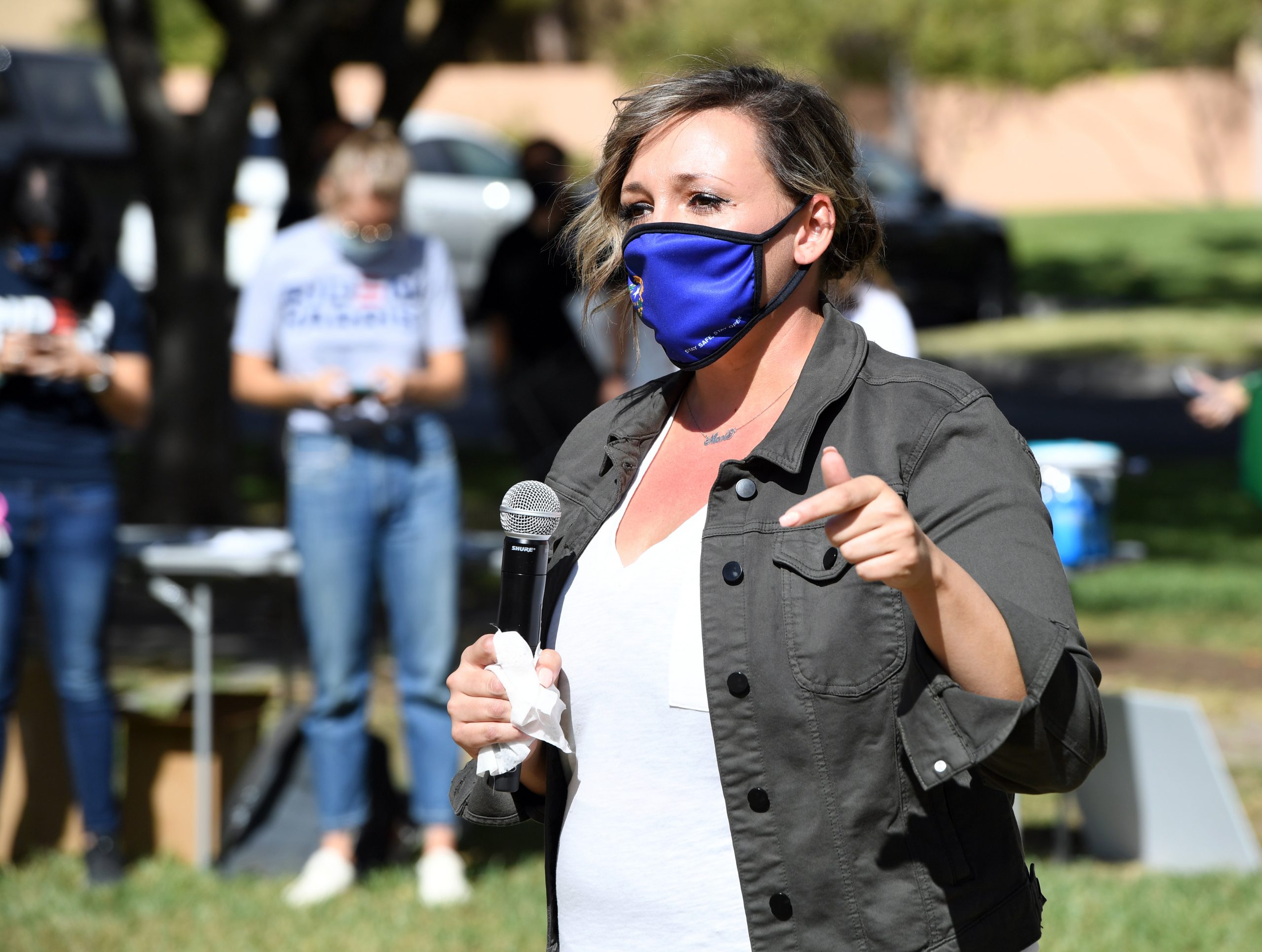 Nevada state Sen. Nicole Cannizzaro (D), pictured during a campaign event for Joe Biden in Las Vegas on Oct. 24, 2020, co-sponsored a public option bill in the state and said on a call hosted by the United States of Care that health insurers that make bids for state contracts must also “make a good faith bid” for its public option. (Ethan Miller/Getty Images)
By Gaby Galvin

The public option debate may be languishing on Capitol Hill, but state-level battles this year signal what’s to come if federal lawmakers revive the plan.

A government-run health insurance option that Americans could buy into has long been an elusive Democratic goal. Proponents back the plan as a way to keep health care costs down by paying lower provider rates than those of private insurers, while opponents say it would amount to government overreach and serve as a stepping stone to a single-payer model that would eliminate private insurance and consumer options.

Morning Consult polling indicates the public option is broadly popular among voters, and President Joe Biden called for the creation of such a plan in his fiscal 2022 budget proposal. Yet the public option, cut out of the Affordable Care Act a decade ago, hasn’t been on the health policy agenda of the Biden administration or Democratic lawmakers as they weigh which measures to include in the partisan “human infrastructure” bill they aim to pass via budget reconciliation later this year. 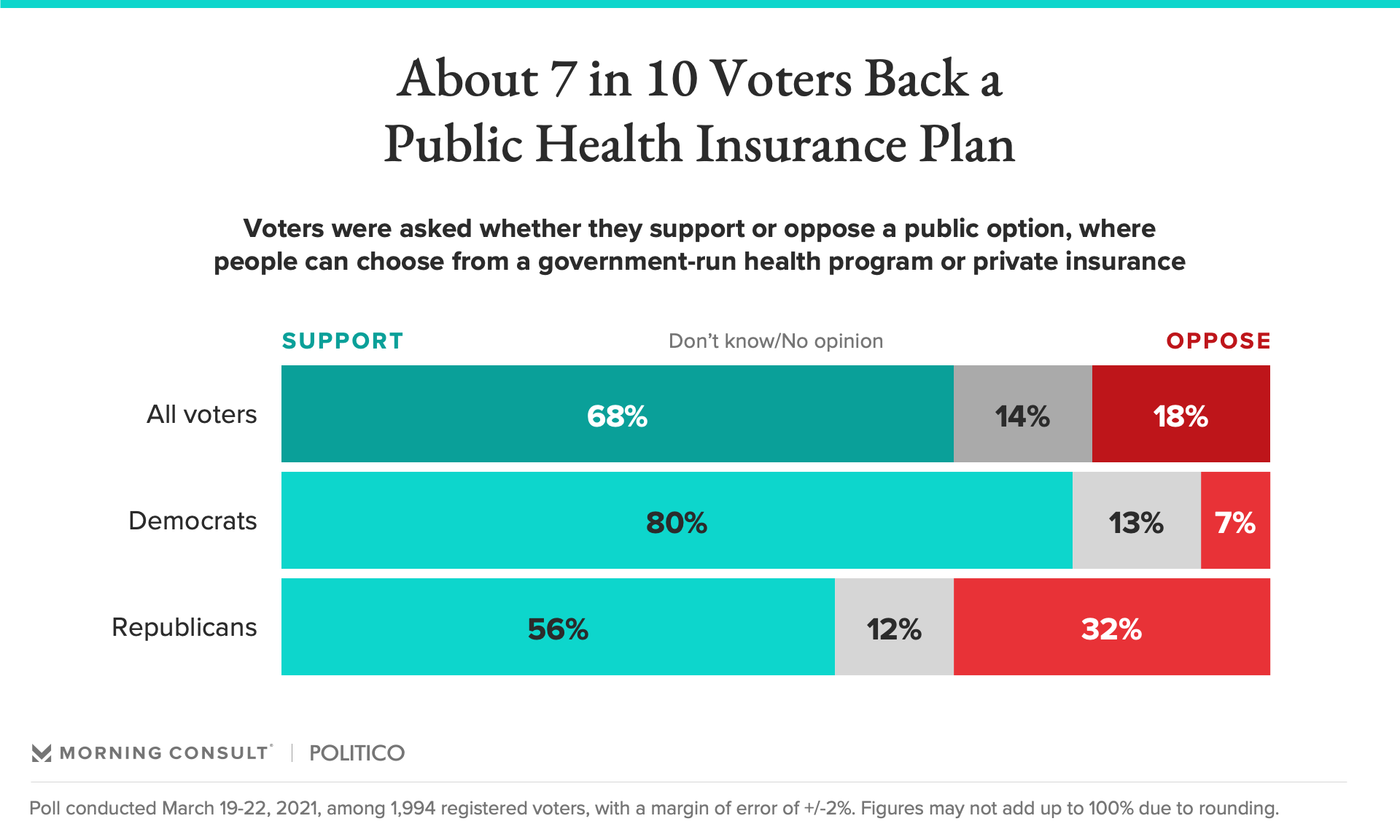 Public option advocates are now shifting their focus toward state-level plans that they hope can later serve as frameworks for a national public option — but they face an uphill battle amid fierce industry opposition, questions about how effective their plans would be and concerns about how to pay for sweeping new health programs.

“Public options have been our No. 1 state initiative on the policy front related to affordability,” said Liz Hagan, director of policy solutions at United States of Care, an advocacy group that works with states on their public option efforts. “The state-to-national approach is how we’ve been thinking about this.”

It wouldn’t be the first time that state health policy has been exported to the federal government; health reform that passed in Massachusetts under then-Gov. Mitt Romney (R) in 2006 served as a basis for parts of the ACA.

Some states are already on board with the public option, though they each have their own frameworks and none is fully government-run. Washington began offering its “Cascade Care” health plan for 2021 coverage, while Colorado and Nevada enacted their own bills last month.

Other states could see movement when their legislatures reconvene. In late June, lawmakers in Oregon ordered the state health authority to study how a public option would work, with a report expected by early 2022. Wisconsin, Nevada, Minnesota and New Mexico have also expressed interest in public option programs.

“Legislation reflects all different stages of public option design, and some are still in the study phase, but I think will be fast-moving, like Oregon,” said Patricia Boozang, a senior managing director at Manatt Health.

Oregon Rep. Andrea Salinas (D) said in an interview that she hopes to introduce a bill creating a public option as soon as February 2022, once the health authority’s study comes in.

Related: Congressional Democrats Gear Up for Public Option Debate in Next Legislative Package

Adding a state-run health plan would be a costly endeavor, though, and states will be eyeing the Biden administration’s willingness to grant them waivers that would provide federal funding to help offset those costs. They’ll also be taking cues from trial and error in other states offering public options as they craft their own bills.

In Washington, for example, premiums were higher for Cascade Care plans than for some commercial offerings, and not enough providers participated in the first year. The state is now tweaking its model.

In an effort to avoid some of those pitfalls, in Nevada, health insurers that would make bids for state contracts must also “make a good faith bid” for its public option, state Sen. Nicole Cannizzaro, one of the bill’s sponsors, said on a call hosted by the United States of Care last week.

The path to passing a state public option is also full of hurdles. In Connecticut, lawmakers abandoned a public option proposal in May after Democratic Gov. Ned Lamont threatened to veto it if it passed the legislature — the third year in a row the plan died.

Proponents are also up against a powerful health care industry that’s largely opposed to the public option, which could increase competition for insurers and pay providers less than private plans do. Some of the country’s top insurers are based in Connecticut, including Aetna Inc. and Cigna Corp., and in an April letter, executives told Lamont they opposed the public option and implicitly threatened to move their operations out of the state.

In Colorado, the Partnership for America’s Health Care Future, an industry group that represents hospitals, drugmakers and insurers, spent record sums lobbying against the public option bill, and the final version was watered down.

“It became very clear that there is a ton of national money from the health care industry that will go into any fight in whatever state against the public option, or health care reform more broadly,” Colorado Rep. Dylan Roberts (D), a lead sponsor of the bill, said in an interview.

Those efforts mirror messaging at the federal level, with industry groups describing the public option as a “one-size-fits-all government-controlled system” akin to Medicare-for-all.

“Evidence shows that the most effective way to expand access to affordable health coverage and care is by improving and building on what works today, where private coverage, Medicare and Medicaid work together – not creating new government health insurance systems controlled by politicians, whether in the states or federally,” Lauren Crawford Shaver, executive director of the Partnership for America’s Health Care Future, said in an email.

State leaders would also need to consider whether a public option would actually meet the needs of their residents. In Illinois, a state-sponsored study of proposals to increase affordability and promote health equity found that a public option would be more beneficial for white residents than for minority communities.

The public option is far from the only avenue lawmakers are considering to improve health care affordability, and federal efforts could relieve some pressure on the states. Congressional Democrats are pushing to make expanded premium subsidies for Obamacare health plans permanent — a move health insurers support.

In some cases, state and federal lawmakers are coordinating their efforts. In Colorado, Roberts said he worked with Sen. Michael Bennet (D-Colo.), who introduced his own public option bill this year with Sen. Tim Kaine (D-Va.). The senators say their bill aligns with Biden’s campaign proposal, though the White House has not publicly endorsed the plan.

While movement in Congress is slow, “states are really looking to fill the gap and don’t want to wait,” Hagan said.