Back to the Office: What Businesses Should Know About Employees’ Views on the Return to In-Person Work

12% of U.S. workers said they never want to physically return to their workplace; 48% have already gone back 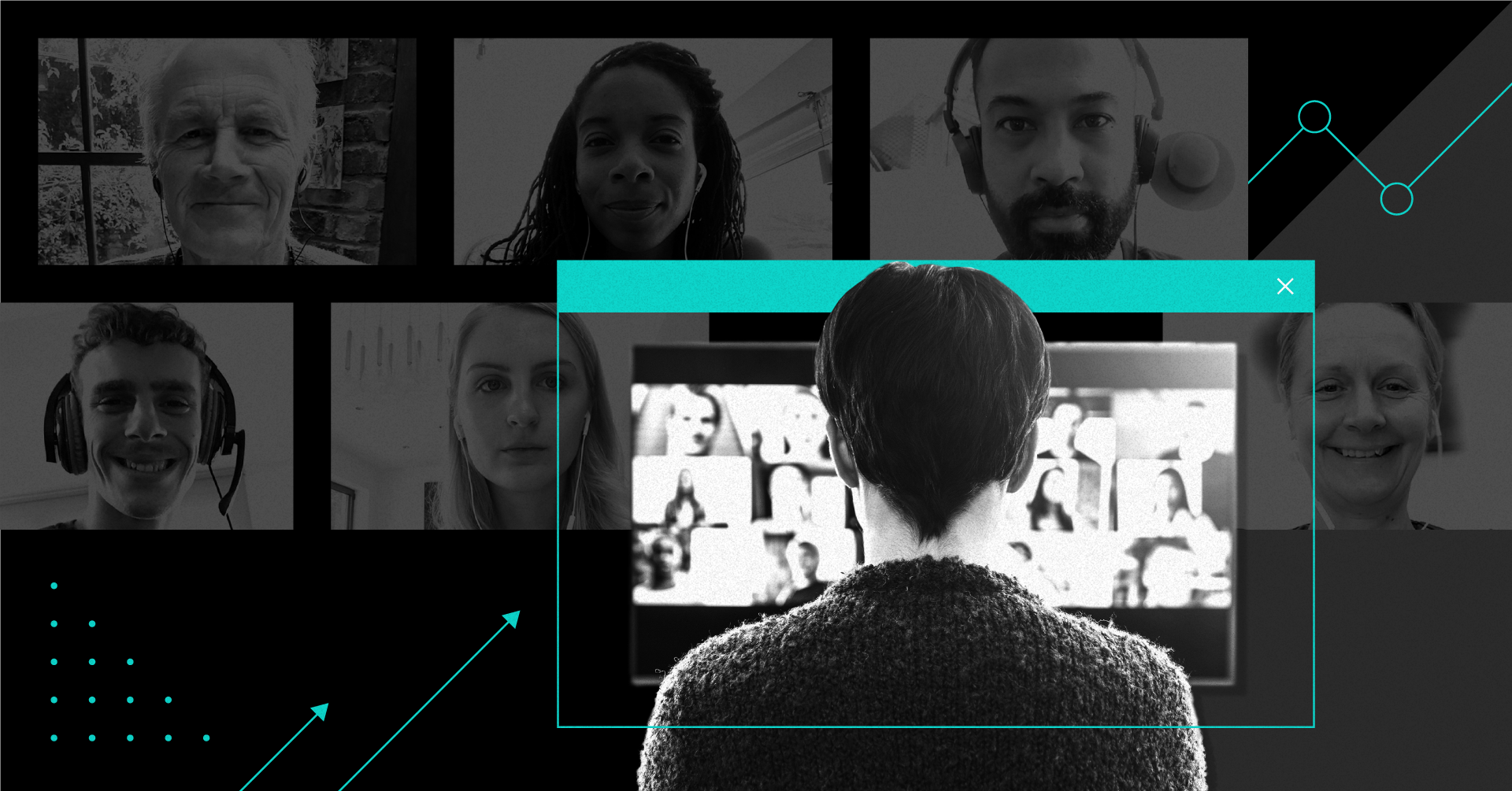 For many workers who spent the past year adjusting to doing their jobs from home, it’s about time to head back to the office. For others, they’ve already returned. Either way, new polling from Morning Consult suggests employees have no shortage of opinions on the right way to return to the workplace, and with the current job market favoring workers, experts say employers must think more carefully about how to keep staffers happy.

“If companies want to be seen as enticing and be competitive with others in the market, they need to be considerate of the needs of their employees,” said Massella Dukuly, learning and development lead at LifeLabs Learning, a consulting company that trains leaders, managers and executives. 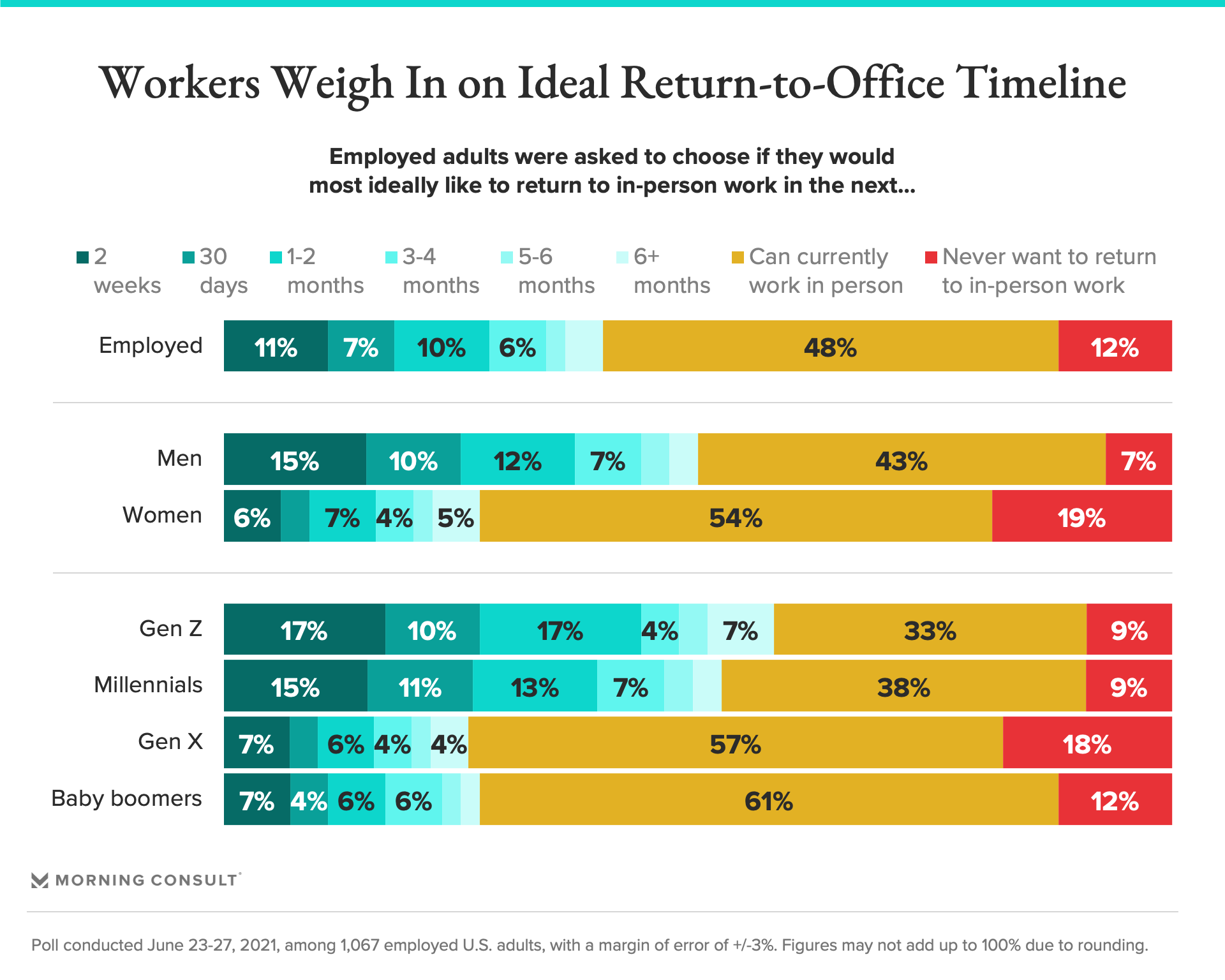 Top of mind for many executives still formulating plans is deciding an appropriate date to mandate when employees resume in-person work, at least to some extent.

Morning Consult asked 1,067 employed U.S. adults to choose from a range of options when they’d ideally like to head back to their offices, and 40 percent of responses spanned from as soon as the next two weeks to more than six months from now, underlining the lack of consensus. Nearly half of respondents (48 percent) said they can already work at their office, while 12 percent said they never want to return to the workplace again.

Women and Gen Xers were most likely to be among the group that prefers remote work, according to the June 23-27 survey of U.S. workers, which has a margin of error of 3 percentage points.

Those gaps come as no surprise to workforce experts such as Dukuly, who say that in order to accommodate employees with vastly different preferences, flexibility is the name of the game. At minimum, employers can involve staff in the decision-making process to keep them happy, experts advised.

“People want to have a voice, even if they can’t be the decision-makers,” said Kimberly Merriman, a professor of management and researcher at the University of Massachusetts Lowell’s Manning School of Business, who has conducted qualitative studies of remote workers over the past year. “Giving people a voice and a say will increase their perception of fairness over the outcome, regardless of what it is.”

While her research indicates that notable shares of people expect to continue working remotely for the long term, Merriman said even those who want to go back to the office at least part time can be easily put off depending on how they’re asked to do so.

For instance, many employers have implied to staff that remote work decreases productivity, a prominent theory prior to the pandemic. “Workers were insulted by that,” Merriman said, and chances are, it’s not necessarily true, according to Dukuly.

“If companies are feeling like they’re less productive, my guess is that their systems simply aren’t set up for remote work,” Dukuly said.

Related: Over Half of Workers Think Employees Should Be Allowed to Talk About Politics at Work. But Even More Say: Please Don’t

Lack of communication can also lead to dissatisfied employees, Merriman said. That’s a trend that Sarah Unger, a cultural analyst and founding partner at cultural insights and strategy firm Cultique, which has conducted qualitative research for clients on the return to offices, has also noticed.

“I think employees, more than anything, want clarity, and employers have struggled to provide that because we’ve been in very unclear cultural times,” Unger said. “It’s incumbent on employers to be clear with employees just how flexible they’re being, so that employees can decide accordingly.”

Indeed, some might decide to leave if they’re unhappy with their company’s return-to-office plan. Forty-six percent of U.S. adults currently working remotely due to the pandemic said they would consider quitting if they were required to resume in-person work before they felt safe doing so, according to Morning Consult’s Return to Normal tracker looking at work and offices.

That likely includes even junior employees, who might have put up with less-than-ideal work conditions at reputable companies before the pandemic, said Anna Tavis, a clinical associate professor and the academic director of the Human Capital Management program at the New York University School of Professional Studies Division of Programs in Business, who served in executive roles such as chief talent officer at Nokia Corp. prior to her academic career.

“The attitude that ‘you should be happy you have a job with us’ isn’t going to work for anybody anymore, not even the big brands,” Tavis said.

In some good news for employers, employee uncertainty, at least with regard to the return-to-office timeline, appears to be decreasing, according to John Leer, Morning Consult’s chief economist, who has been researching employee attitudes since the onset of the pandemic.

Leer’s latest data indicates that 15 percent of Americans who are working from home due to COVID-19 said they don’t know when they’ll return to their offices, but that “over time, that uncertainty is dwindling,” he said. About 75 percent said they anticipate returning by September, according to Leer.

If employees can agree on one thing, he said, it’s that they expect hybrid work models — a mix of workdays at the office and at home — to be a part of their future as the country emerges from the pandemic. As of a June survey, only 15 percent of respondents said they plan on working from an office every day, while 75 percent said they’ll work one to four days per week from home, Leer said. 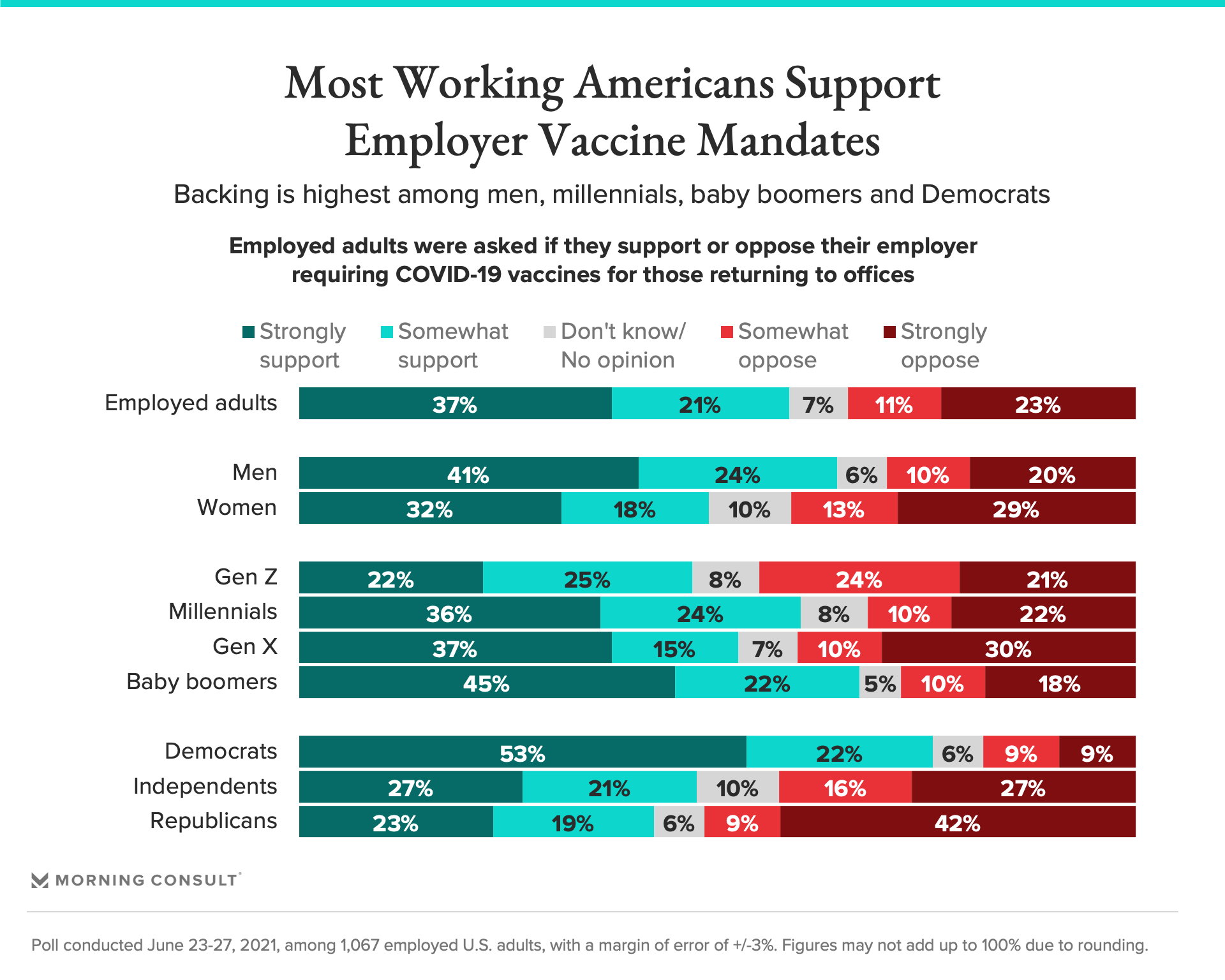 One thing that might encourage more employees to head back to their workplaces sooner rather than later: vaccine requirements.

More than half of working Americans (58 percent) support their employer requiring staff to be vaccinated for COVID-19 before returning to offices, with Democrats, baby boomers, millennials and men driving that sentiment.

Less popular is the concept of hot desking, wherein multiple employees share one desk on different days, as opposed to the assigned seating arrangements most workers were used to before the pandemic: 68 percent of employed adults said they’d prefer to work at an assigned desk, while 17 percent said the same of hot desks.

In fact, Morning Consult data suggests that for many, the more private the office, the better.

Opinions are more split when it comes to open-plan offices: 52 percent of employees said they’d be comfortable with that setup. 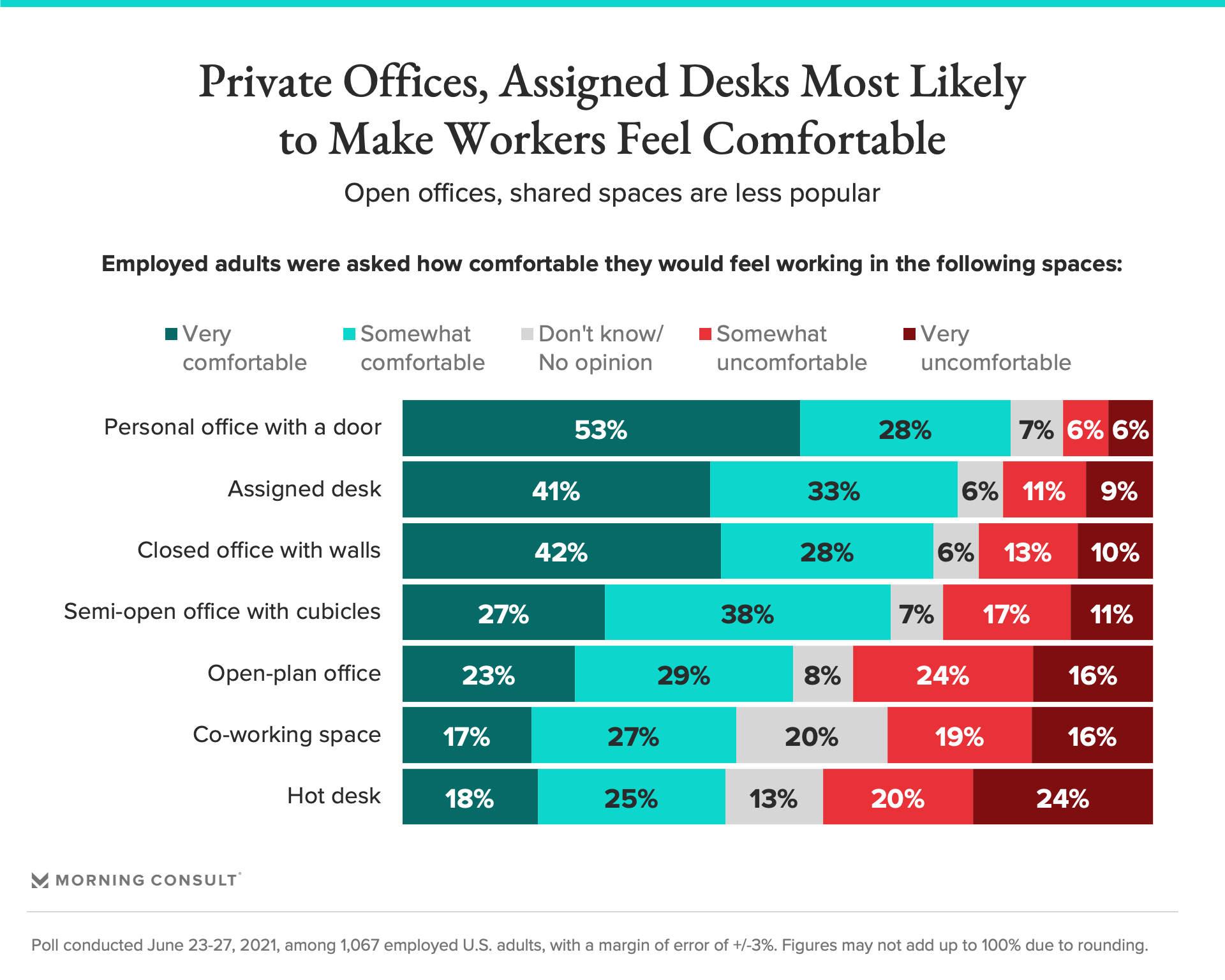 Ebbie Wisecarver, global head of design at WeWork, has been thinking a lot about the layout of the company’s office spaces, and how to redesign them to accommodate a more flexible style of working.

While many employees might not yet feel comfortable being crammed into close quarters, Wisecarver said there’s high demand for communal spaces for activities such as team building and training new employees, tasks that have proven difficult to do remotely.

“We’re moving away from this need to pack in a lot of desks and are a lot more focused on creating great collaboration spaces with various types of furniture in different configurations,” Wisecarver said. “That allows people to find the space that works best for them.”

According to the June 23-27 poll, 44 percent of working Americans said they’d feel comfortable working at a co-working space like WeWork or LiquidSpace, compared with 35 percent who said they would be uncomfortable.

Several workforce experts suggested that mental health has become more important for people given the events of the past year, something else that has been a focal point for Wisecarver as she thinks about the future of WeWork’s architecture. The company plans to add rooms designed for yoga and meditation to their office buildings, she said. WeWork also wants its offices to feel more inclusive, according to Wisecarver, by having nonbinary bathrooms and prayer rooms available for employees. 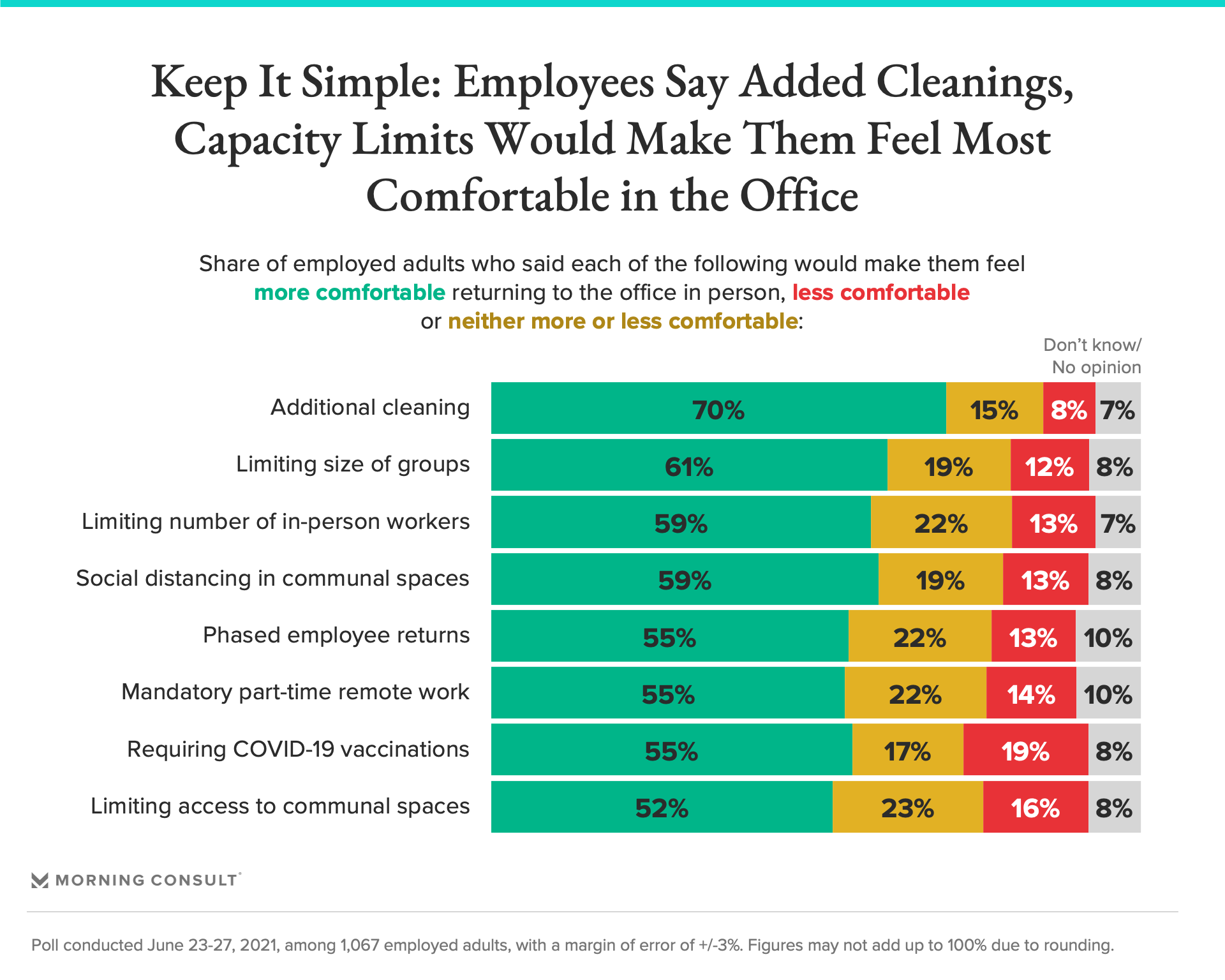 For companies that might not have the resources to invest in office redesigns, there are simpler measures that could also help make employees feel more comfortable returning to offices. In fact, the protocol that workers said would make them feel safest in an office is additional cleaning measures, according to the June 23-27 survey.

And, if certain measures are not working out for employees, the solution is simple, if slightly unfamiliar to corporate America, according to workforce experts: change.

“What companies need to be doing — which they’re not used to — is experimenting and learning,” Tavis said. “Companies need to learn to experiment with how they work, not just what they do, and be self-reflective about what works and doesn’t.”

Related: A Year After Lockdowns, Consumers and Health Care Professionals Weigh In on Most Effective and Comforting Safety Measures
Future of Work Pandemic Impact Return to Normal Vaccines