As Momentum Builds for a Clean Energy Standard, Utility Trade Group Gets on Board — With Push for Partial Gas Credits 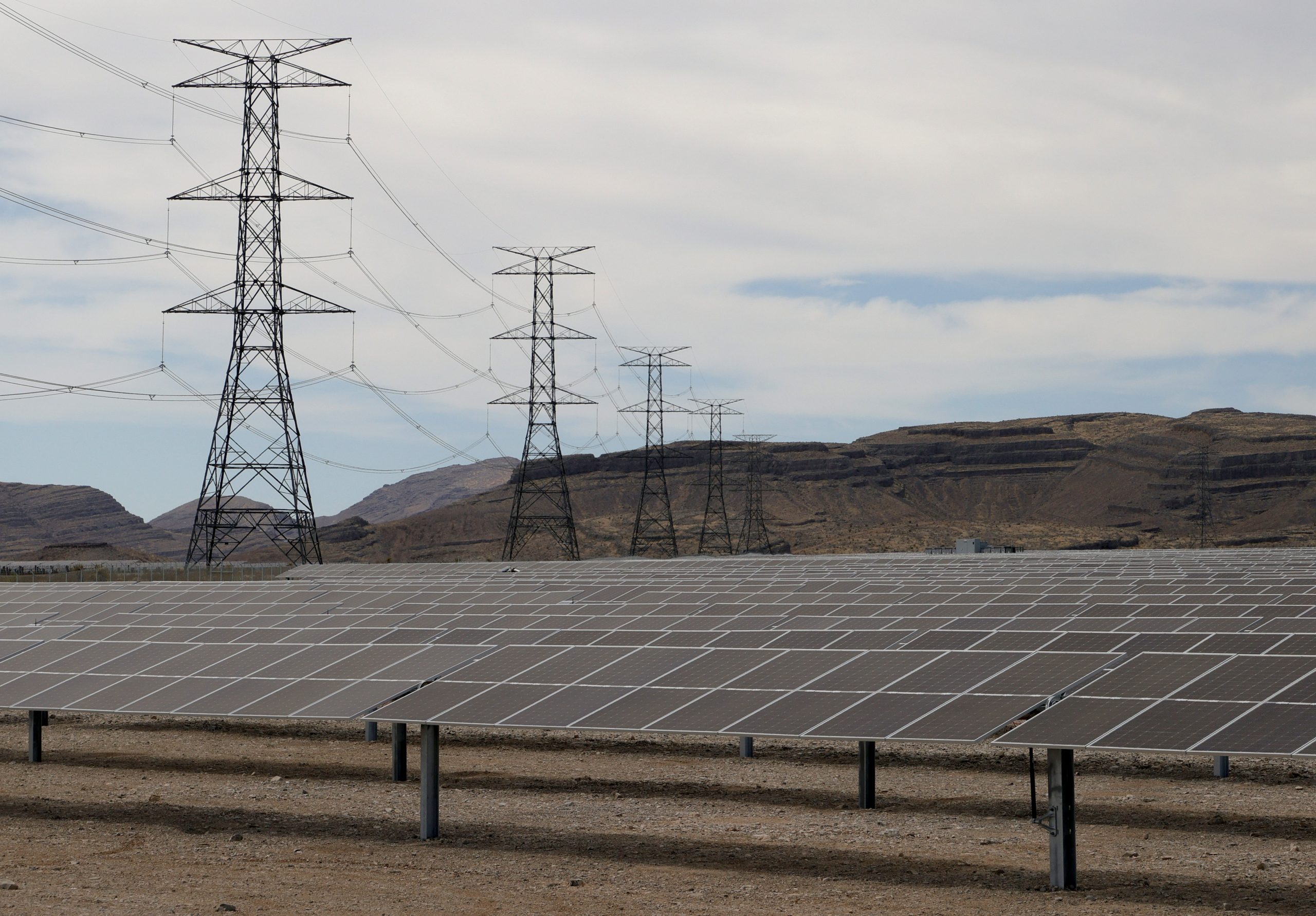 Transmission towers are shown near solar panels from the 100-megawatt MGM Resorts Mega Solar Array after it was launched on June 28, 2021, in Dry Lake Valley, Nev. (Ethan Miller/Getty Images)
By Lisa Martine Jenkins

Policy proposals mandating that utilities produce a certain share of their power via zero-emission sources by a certain date are picking up speed at the federal level, and electric companies have begun to pre-emptively hop on board rather than be left in the dust. Crucial to their pitch for a clean energy standard? A place for natural gas.

The Edison Electric Institute, which represents all U.S. investor-owned electric companies, is actively lobbying for a standard that covers all zero-carbon energy resources (including existing nuclear and hydropower generation), allows for new technologies as they become available and gives partial credits for natural gas generation.

At minimum, a clean energy standard “or any other policy tool has to create space in the near term for natural gas generation to continue to play a critical role in integrating more renewable generation,” said Emily Fisher, EEI’s general counsel and senior vice president for clean energy. “Electric companies and their customers cannot be penalized for keeping the system reliable as we work to achieve our clean energy goals.”

A natural gas carve-out is controversial, given that gas is by no means zero-carbon. “It’s not a clean energy standard if it includes credit for gas,” said David Pomerantz, executive director of the Energy and Policy Institute. “On a foundational, definitional level, the goal is to get to zero emissions.”

But EEI’s embrace of what it calls a “well-designed” clean energy standard marks a change in how utilities are talking about the transition publicly, as they vie for a seat at the table for ongoing conversations. An analysis of recent investor calls by the advocacy group Evergreen Action found that major power companies (including those that currently rely largely on natural gas) have expressed support for a clean energy standard (NextEra Energy Inc.) and President Joe Biden’s climate plans more broadly (Public Service Enterprise Group, Edison International).

Rebecca Kujawa, chief financial officer for NextEra Energy Inc., explicitly endorsed a standard “that accelerates the decarbonization of the electric grid” during the company’s call in May. A Morning Consult analysis of the company’s 2020 carbon emissions and resource mix found that NextEra produced 73 percent of its power from natural gas, with an average emissions rate of 663 pounds of carbon dioxide per megawatt-hour.

This enthusiasm from the sector comes as utilities grapple with an entirely different regulatory environment than that of the fairly unencumbered Trump years. Assuming a federal standard of some sort passes, this is their opportunity to avoid regulatory whiplash and confusion resulting from patchwork state regulations; according to the Clean Air Task Force, at least 14 states since 2017 have moved to establish a clean energy standard of some sort.

While Biden has pushed Congress to pass a clean energy standard via multiple potential avenues, a recent internal memo from two advisers said that the White House plans to use the reconciliation process to push it through alongside other climate proposals in a second infrastructure bill. The Biden administration has held firm to its stated goal of a carbon-free power sector by 2035.

However, implementing the policy could be complicated by the Byrd rule, blocking non-budgetary matters from being considered via reconciliation. Samuel Thernstrom, chief executive for the Energy Innovation Reform Project, said he does not think the reconciliation strategy for a clean energy standard “has any real chance of succeeding” but its proposal sends the message to those invested in climate action that the White House is taking the issue seriously.

The bill takes a “technology-neutral” approach to power sector decarbonization, with a goal of reducing emissions 80 percent by 2050. It does offer partial credit to natural gas generation.

When the McKinley-Schrader bill was initially introduced in the last days of the 116th Congress, it did not receive EEI’s endorsement; Fisher said the industry group’s thinking on the bill has evolved in the interim as its members “consider their long-term clean energy trajectories.” But with its reintroduction, which comes as momentum for a clean energy standard mounts from the Biden administration, EEI member company Xcel Energy Inc. has also signed on.

Related: GOP Foes of ESG Investing Say It Puts Politics Over Profits. Yet Most Investors Don’t See It That Way

American Electric Power, Duke Energy Corp. and Southern Co. — all of which Evergreen Action points out have historically opposed policies favoring renewables — endorsed the December 2020 bill and its latest iteration.

Thernstrom argues that passing a standalone bill is preferable to passing a standard via reconciliation, because to be “durable” and not undone by a subsequent Congress, a standard must be bipartisan. He said such a bill would likely end up looking like something in between McKinley-Schrader and the CLEAN Future Act, referencing the behemoth proposal put forward by House Energy and Commerce Committee leaders, which contains a clean energy standard pegged to Biden’s 2035 goal.

While the timelines and targets of the two bills are different, unpublished modeling by Thernstrom’s organization indicates that the McKinley-Schrader goal would necessitate a grid transformation to roughly 95 percent zero-emissions generation by 2050.

Correction: The initial version of this story incorrectly stated that the McKinley-Schrader bill does not offer partial credit to natural gas generation.