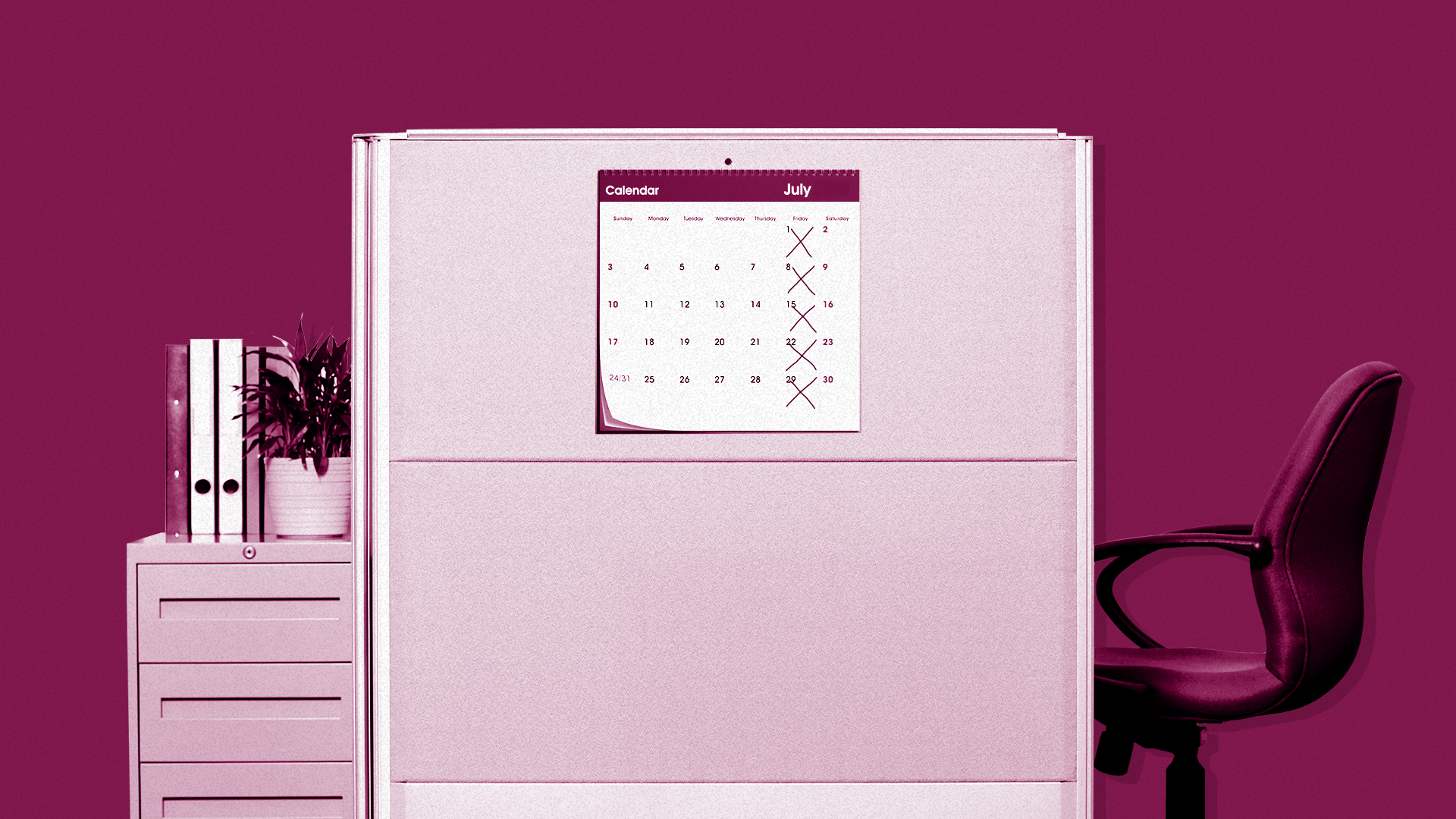 When given the choice, 49 percent of Gen X and suburban-dwelling workers preferred to work four days a week, according to new Morning Consult polling. (Getty Images / Morning Consult artwork by Samantha Elbouez)
By Alyssa Meyers

Many organizations — from marketing and software companies in the United States to schools and hospitals as far away as Iceland — have been experimenting with a four-day work schedule, and many have touted the benefits: happier employees, increased productivity and more.

But Morning Consult data reveals that while the concept is popular with U.S. employees, the five-day workweek still holds some appeal to American workers, who might not yet be ready for any more major changes to the way they work.

When presented with several 40-hour workweek options to choose from, ranging from three long days to seven short days, 40 percent of 1,067 employed adults said they’d most prefer working four days per week for at least 10 hours a day, according to a Morning Consult poll conducted June 23-27.

Women and members of older generations, as well as those who live in suburban areas, showed the strongest support for the four-day model, according to the survey, which has a margin of error of 3 percentage points.

Still, as employees reconsider their work-life balance amid the pandemic, 35 percent of working Americans said they’d rather stick to a traditional five-day workweek consisting of eight-hour days. 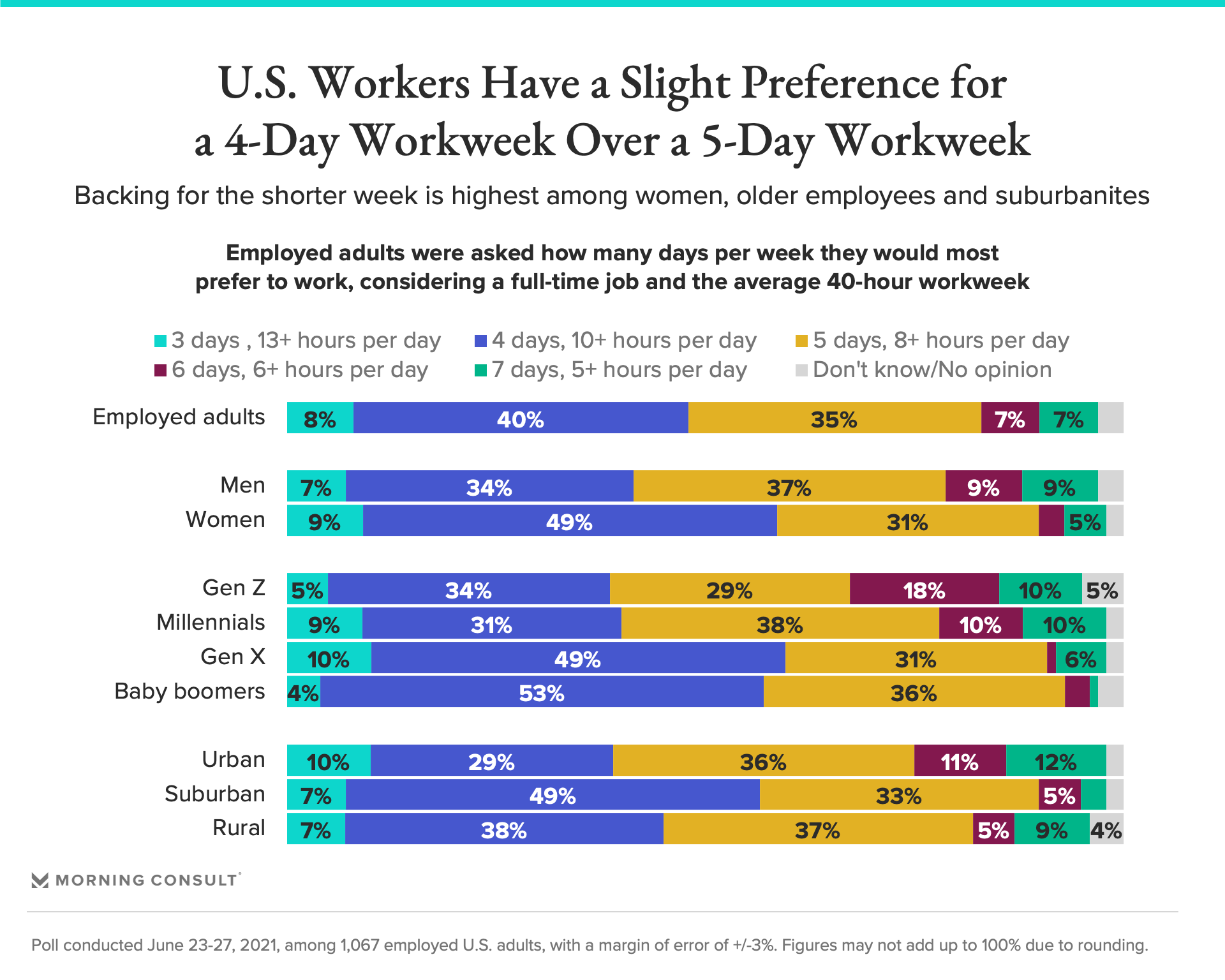 The fact that an overwhelming majority say they wouldn’t necessarily opt for a standard five-day workweek is noteworthy given how predominant that model is in the United States, said Sarah Unger, a cultural analyst and founding partner at cultural insights and strategy firm Cultique, which has conducted qualitative research for clients on the return to offices.

The wide variety of responses reflects a larger re-evaluation of workplace norms focused on “finding space for mental wellness, emotional wellness and exploring other passions in your life that can even contribute to your ambition and success at work,” she said. “Life doesn’t have to fit into our work anymore — work has to fit into our lives.”

For those who do favor working five days a week, there’s a familiar comfort associated with the standard approach, she said.

“The societal norm of the five-day workweek has been around for a long time,” Unger said. “When you say ‘four-day workweek,’ some people still associate that with something negative, like longer workdays” that quickly add up to more than 40 hours of work per week.

Women were more inclined than men to want to shorten the workweek, according to the survey. Roughly half (49 percent) of female employees opted for a four-day workweek, compared to about one-third (34 percent) of men, a gap of 15 percentage points.

That could be because women have traditionally taken on more responsibilities outside of the workplace, such as child care, so “they can very tangibly see use of that extra day,” Unger said. (In a possible reflection of those child care needs, women are also among the most inclined to prefer working from home in the long run, according to Morning Consult data.)

Related: Back to the Office: What Businesses Should Know About Employees’ Views on the Return to In-Person Work

Discrimination based on gender, race and other factors in the workplace might be less common today that it was even a few years ago, but there’s still a long way to go, Unger said. Allowing for more flexible work schedules could help further level the playing field.

“In general, when you look at people who potentially stand to gain the most from more balanced and equitable workspaces,” she said, “women are a big part of that, as well as other marginalized populations.”

Older workers were also more inclined than their younger colleagues to prefer a shorter workweek.

Wisdom about burnout comes with age, as do time management skills, Unger said, which could be driving the generational divide. Younger employees — who are likely to deal with more logistical assignments such as scheduling meetings — could also be more concerned about how a change in the workweek would impact their day-to-day tasks and would require more clarification before they get on board, she said.

“Looking at organizational network analysts and data I’ve seen around social networks within companies, the most senior workers have stronger networks, but stop generating new connections,” said Tavis, who served in executive roles such as chief talent officer at Nokia Corp. prior to her academic career. “The more junior people are still shopping around. They’re still in their first or second job and know they’re not going to last more than a couple of years, so they’re more externally focused.”

Related: Over Half of Workers Think Employees Should Be Allowed to Talk About Politics at Work. But Even More Say: Please Don’t

When it comes to urban versus suburban dwellers, there’s a 20-point difference in opinion: 49 percent of suburban workers said they prefer a four-day workweek, compared to 29 percent of urban employees who said the same.

In many cases, proximity to offices drives people to live in cities, as does the desire to lead a fast-paced lifestyle. People who live in less-populated areas are probably less fond of “the hustle,” Unger said, so they’d more appreciate an extra day off work.

Also, those who live in the suburbs might face longer commutes to work, Tavis said, with many corporate hubs centered in metropolitan areas.

If companies do move to a four-day workweek, they should be prepared to see an empty office on Fridays, which was the most popular workday employees said they’d like to see eliminated in this scenario. Sixty-three percent of workers chose that option, and roughly 1 in 4 (26 percent) opted to ax Mondays, the second-most popular choice.