Biden’s Child Tax Credit Gets Support From Over Half of Voters. A Similar Share Says It Should Expire

54% support the up to $300-per-child monthly payments; 52% think it shouldn’t be permanent 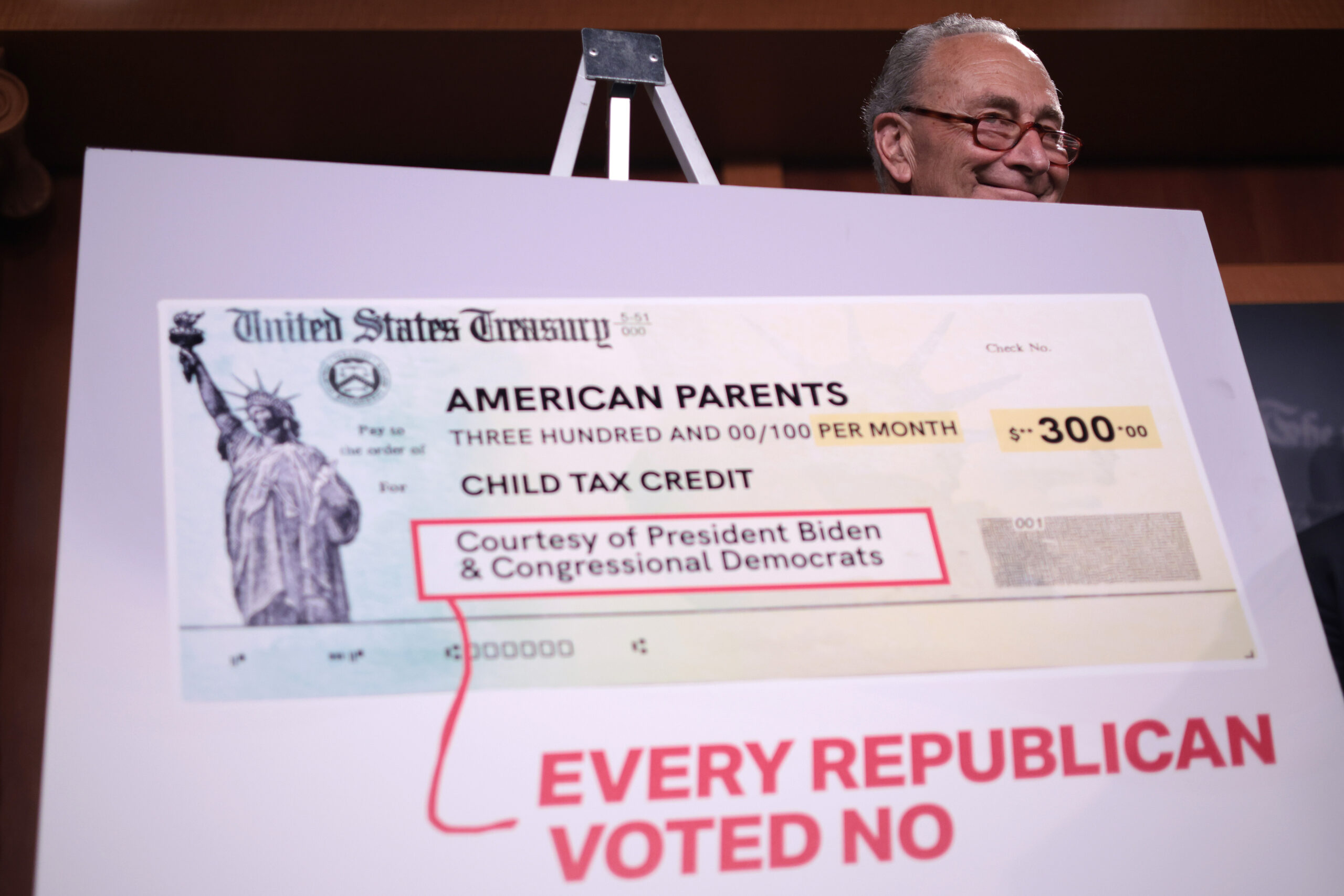 Senate Majority Leader Chuck Schumer (D-N.Y.) touts the child tax credit during a press conference at the U.S. Capitol on July 15, 2021, in Washington, D.C. A Morning Consult/Politico poll found that 54 percent of voters support the monthly payment of $300 per child for most families. (Win McNamee/Getty Images)
By Claire Williams

Monthly child tax credit payments of up to $300 per child started going out last week, an achievement for the Biden administration that has been touted by a historian of U.S. welfare policy as the biggest anti-poverty push in the United States since Lyndon Johnson’s presidency.

President Joe Biden, who has likened the payments to a tax cut for working- and middle-class families, has also urged Congress to extend the payments past this year, a tricky proposition in the divided legislature.

Just over half of voters, so far, support the payments, according to a new Morning Consult/Politico poll. Extending the benefits indefinitely, however, isn’t nearly as popular. 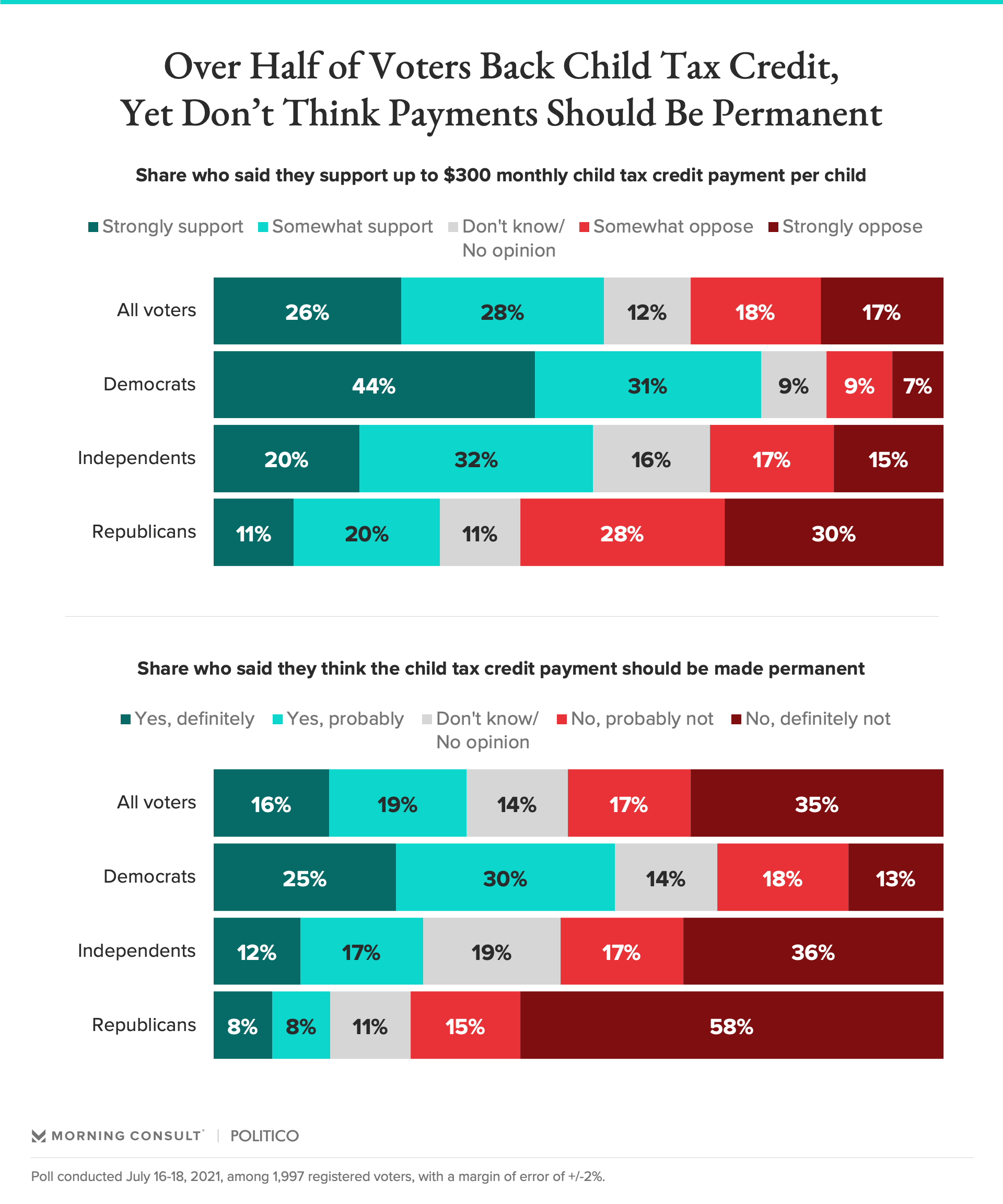 Democrats are far more likely than other voters to back the payments, as well as making them permanent. Seventy-five percent say they support the child tax credit, and 55 percent say it should be made permanent.

Republican voters are much less likely than Democrats to support the payments at 31 percent, and only 16 percent say they should be permanent. An overwhelming 73 percent say the child tax credit shouldn’t become permanent.

Overall, 52 percent of voters think the child tax credit should not be made permanent, a figure that could be problematic for Democrats, who have called for an extension of the benefit as part of their proposed $3.5 trillion budget deal to be pursued via budget reconciliation.

Related: Data Suggests Minority Groups Most Likely to Be Vulnerable at End of Housing Protections

There have also been questions about how easily payments reach parents, with potential problems arising among the unbanked or underbanked, and among those who don’t have direct deposit information on file with the Internal Revenue Service.

Among voters with a child under 18 years old, about half said they’ve received a child tax credit as of July 18 (payments began July 15). Registered voters are less likely to be among the categories of Americans who are difficult for the IRS to reach.

Despite the criticisms of the expanded tax credit, overall, the Biden administration appears to be getting most of the credit for the payments. 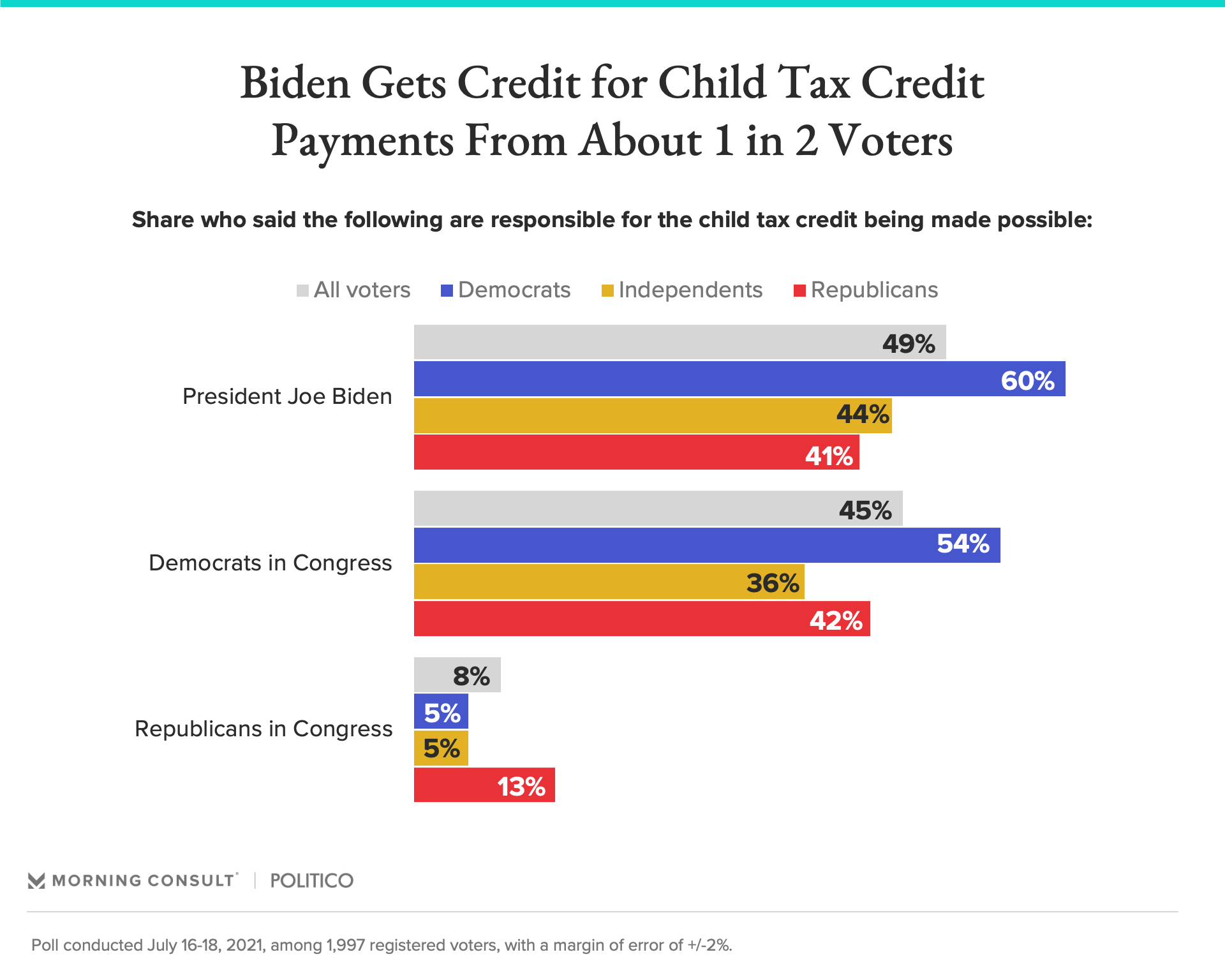 Nearly half of all voters (49 percent) say that Biden is responsible for making the payments possible, while 45 percent said the same about Democrats in Congress and 8 percent credited Republicans in Congress.

More Democratic voters gave Biden and Democrats in Congress the credit, at 60 percent and 54 percent, respectively.

The survey was conducted July 16-18 among 1,997 registered voters and carries a margin of error of 2 percentage points.