Democrats’ Drive to the Left Threatens Their Grip on Power

Voters see both parties polarizing, but it’s only the Democrats they increasingly say are too extreme 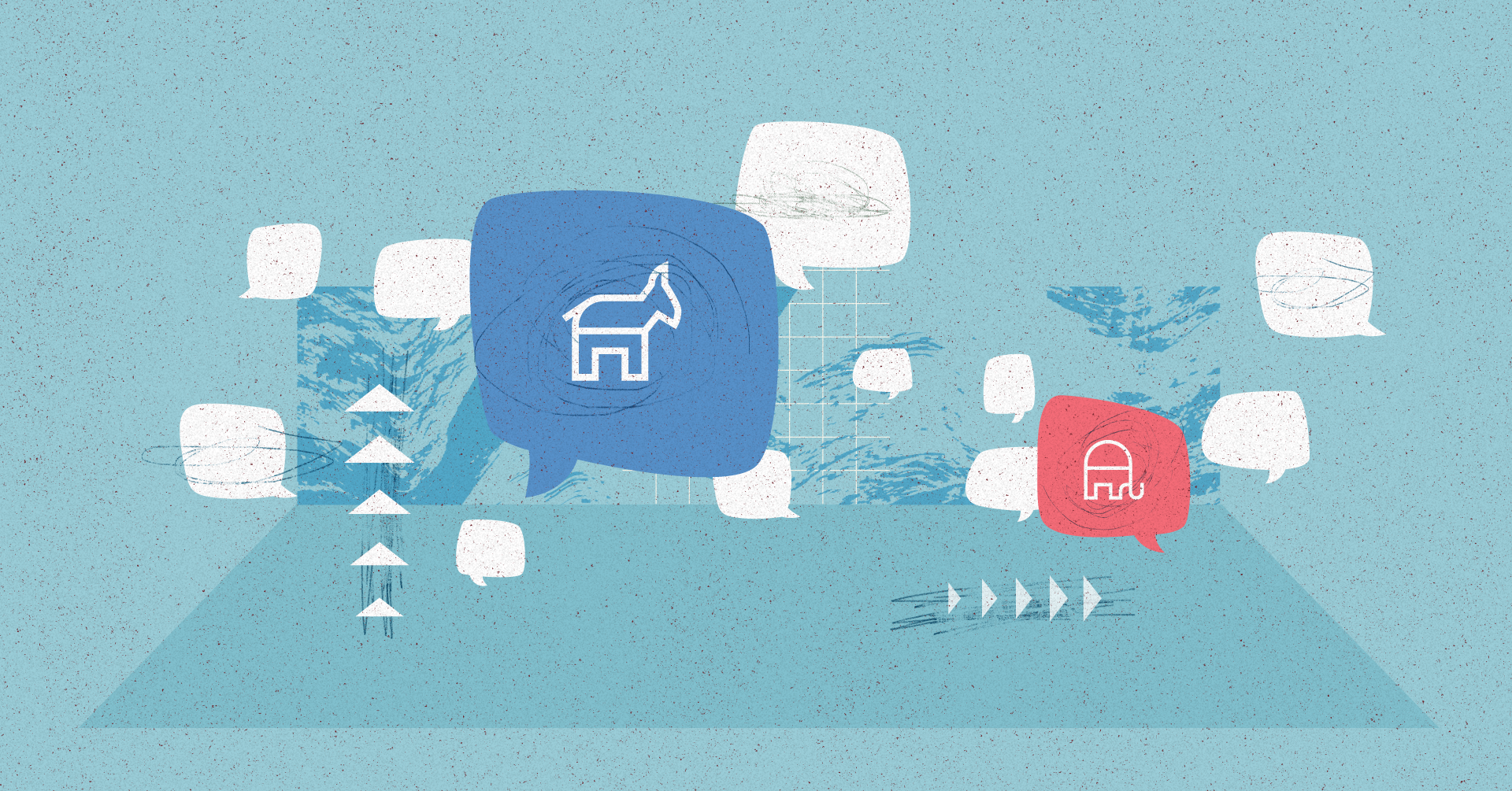 The Democratic Party’s leftward trajectory during the Donald Trump era of American politics hasn’t prevented it from regaining full control of the levers of federal power, but yearslong polling trends suggest those priorities may come at an electoral cost in next year’s midterm elections.

While voters are increasingly likely to perceive the Democratic and Republican parties as liberal and conservative, respectively, the electorate is more likely to point the finger at Democrats when it comes to whether the parties have gone too far in their ideological pursuits, according to the latest edition of Morning Consult’s annual State of the Parties survey.

Meanwhile, the share of voters who said the Republican Party was conservative rose 8 points during that time (60 percent to 68 percent). That number includes a 9-point increase among GOP voters, to 78 percent, and an 8-point rise among independents to 59 percent. 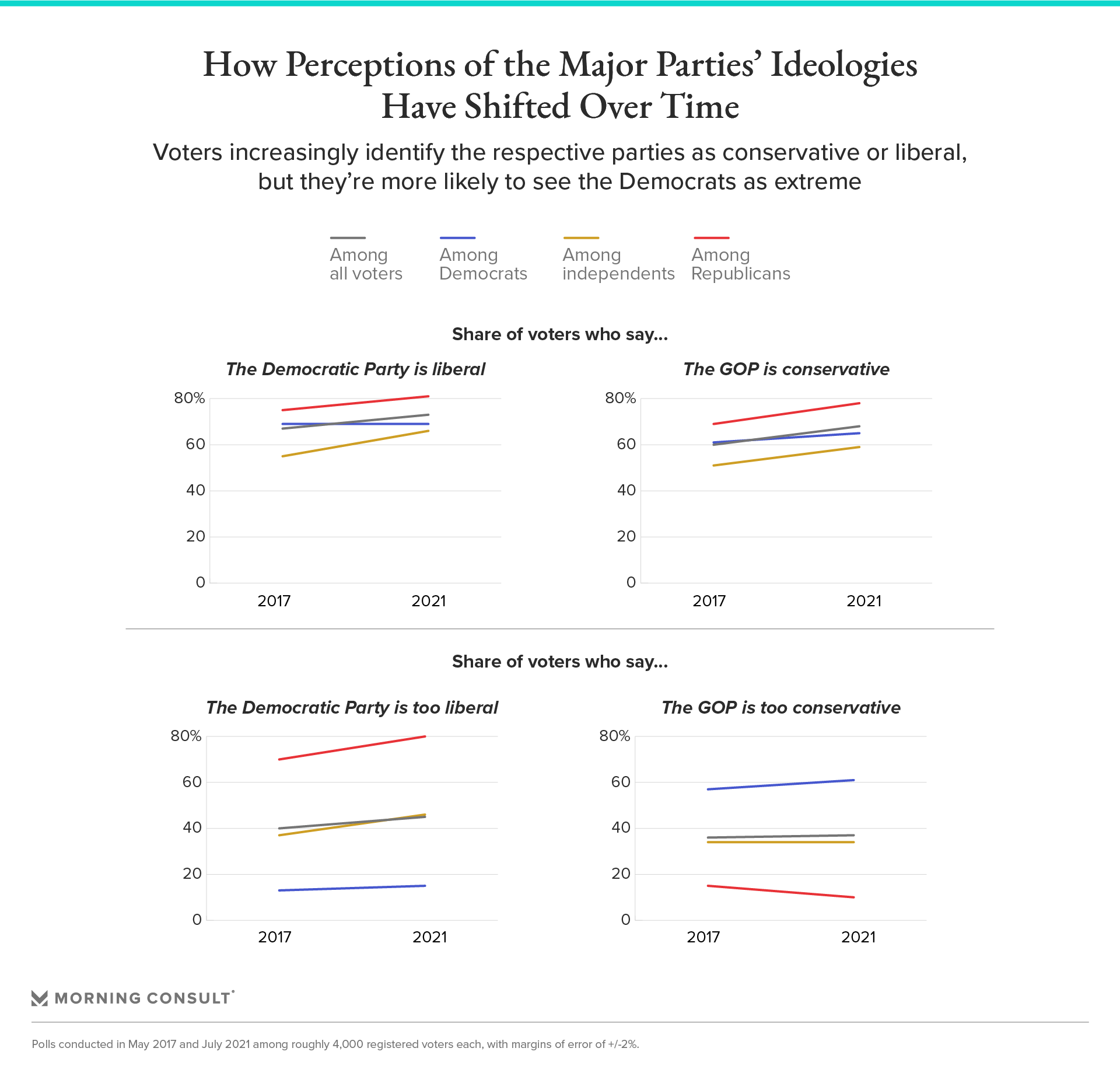 But while a larger share of the electorate now believes that both parties are embracing their ideological bents, voters are more likely to cast the Democratic Party as “too liberal” than they are to consider the GOP “too conservative,” and the share of voters who say the Republican Party is too far right has changed just 1 point in four years, compared to a 5-point rise in the share who think the Democrats are going too far left.

“Even if independents aren’t in love with one party’s issues and leaders, perceived extremism by the other party could keep those independents in line,” said Nathan Gonzales, a nonpartisan elections analyst who edits and publishes Inside Elections. “Democratic overreach could alienate recently converted voters who are reminded why they voted Republican for the last few decades.”

Perceptions of ideological extremism are all the more worrying given the fronts on which next year’s decisive contests will be fought: competitive suburban-based districts in the House, and on the Senate side, battleground states such as Arizona, Georgia, Pennsylvania and Wisconsin that ran razor-thin margins during the 2020 presidential election.

The poll found that suburban voters — now a critical aspect of the Democratic coalition and pivotal to their success in future elections — were mostly in line with voters overall when it came to perceptions of the parties’ ideologies. Nearly half (47 percent) said Democrats are now too liberal, up from 42 percent in 2017, while 37 percent said the GOP is too conservative, virtually unchanged from four years ago.

“Suburban voters are not very comfortable with the Republican Party under Trump, but they may not be comfortable either with a party that’s really far left on economic issues,” said Stephen K. Medvic, a professor of government and program chair of public policy at Franklin & Marshall College. “The typical suburban voter is pretty liberal on social issues, but they’re pretty moderate to conservative on economic issues, and maybe even the law-and-order kind of issues.”

Ben Koltun, director of research at Beacon Policy Advisors, noted that before President Joe Biden’s election last year, the former vice president — who is perceived as more centrist than much of his party — had been “a welcome presence” in those suburban districts during the 2018 midterm elections.

As he pushes through what Democrats are calling the most ambitious and sweeping progressive agenda since Franklin Delano Roosevelt’s presidency, whether or not Biden retains that moderate perception among voters is likely to play a decisive factor in the congressional makeup for the final two years of Biden’s first term in office. 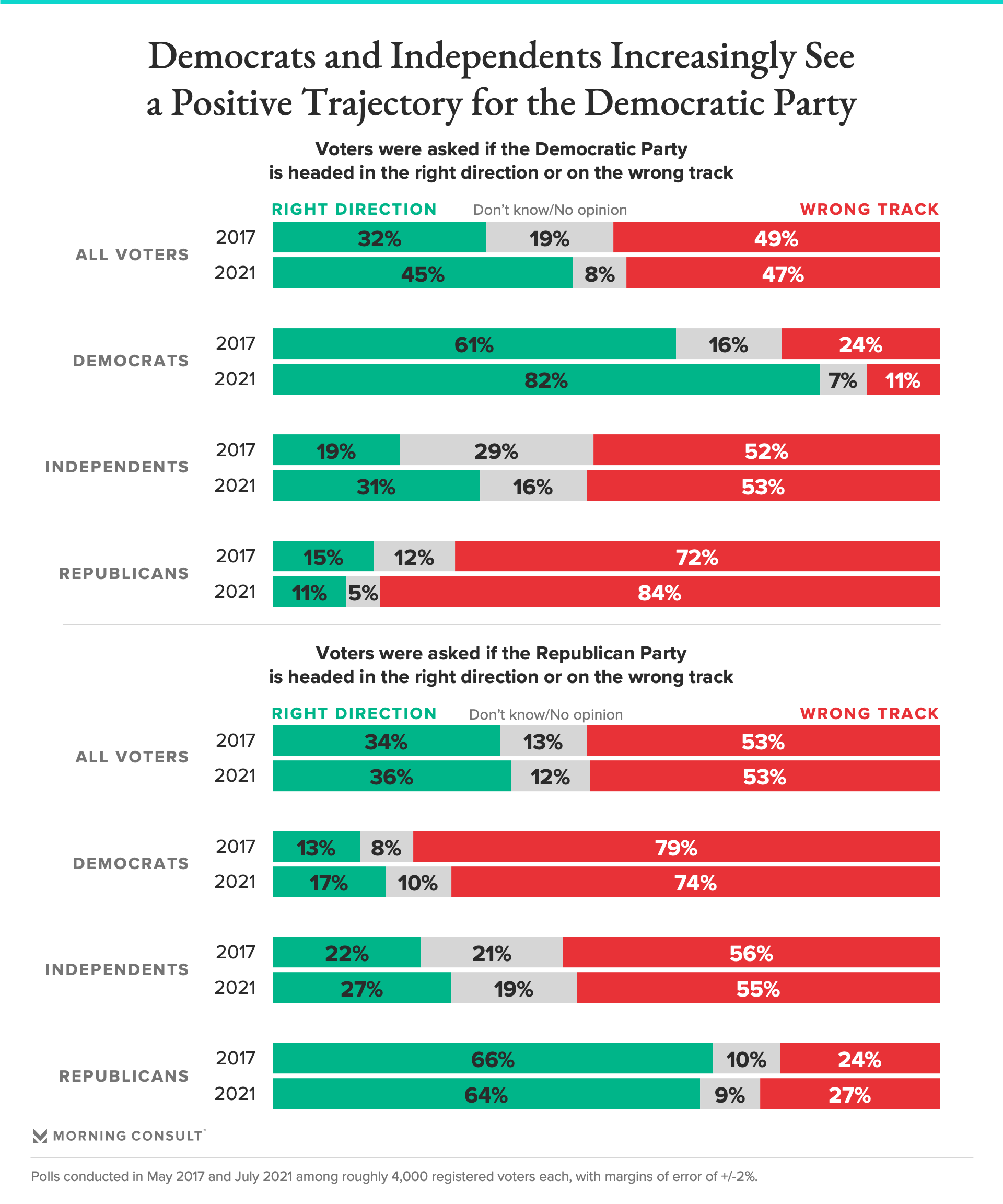 The four-year trend also brings good news for Democrats. Even as voters — especially independents — increasingly see the Democratic Party as too liberal, they’re also more likely to say the party is headed on a positive course. The share of voters overall who said the party is moving in the right direction increased 13 points, from 32 percent to 45 percent, between 2017 and 2021, while the share of independents who said the same rose 12 points (19 percent to 31 percent) during that time.

By comparison, the share of voters who said the GOP was headed in the right direction was virtually unchanged over the past four years, and the share of independents who agreed increased 5 points. Just over half of voters (53 percent) continue to say the Republican Party is on the wrong track, compared to 47 percent who say the same of Democrats.

Related: ‘Freedom’ vs. ‘People’: How Republicans and Democrats Define Their Respective Political Parties
Congressional Politics State of the Parties