‘Freedom’ vs. ‘People’: How Republicans and Democrats Define Their Respective Political Parties 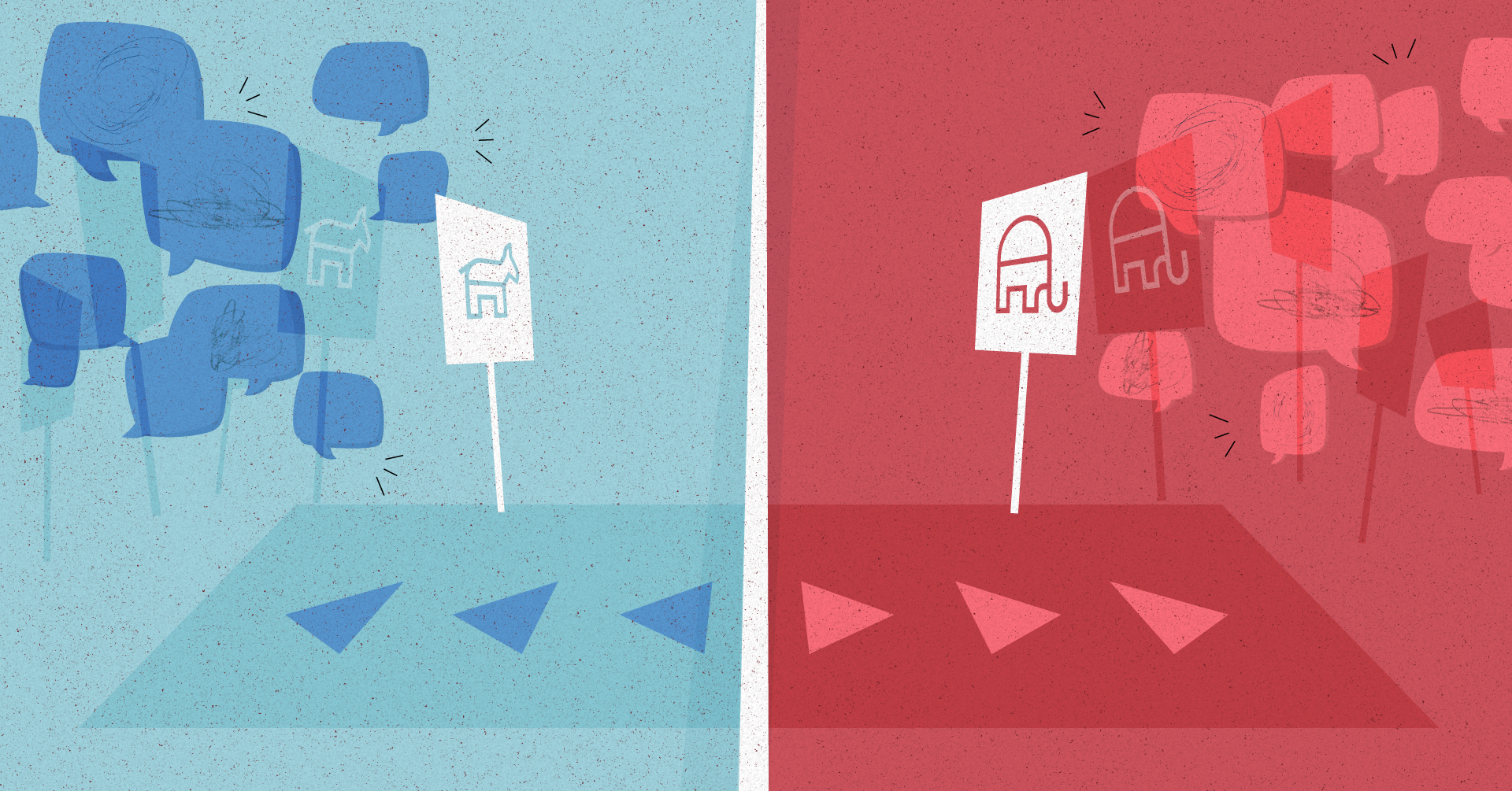 Voters often voice strong views on current policy issues, but when asked to define what their parties stand for, values tend to weigh heavier in their responses, according to the latest edition of Morning Consult’s annual State of the Parties survey.

The July 6-10 poll asked voters to describe what the Republican and Democratic parties stand for in their own words. This analysis – based on open-end responses from 1,768 Democratic voters and 1,333 Republican voters – categorized answers in three ways: explicitly political (such as winning elections, beating their rivals or advancing their own interests), explicitly policy-oriented (such as addressing government spending, the climate, health care or abortion) or values statements (such as freedom, equality, religion or ideology).

Among both Democrats and Republicans, fewer than 1 in 5 cited explicit policy concerns, while more than 3 in 5 spoke about larger values that they see their party personifying. 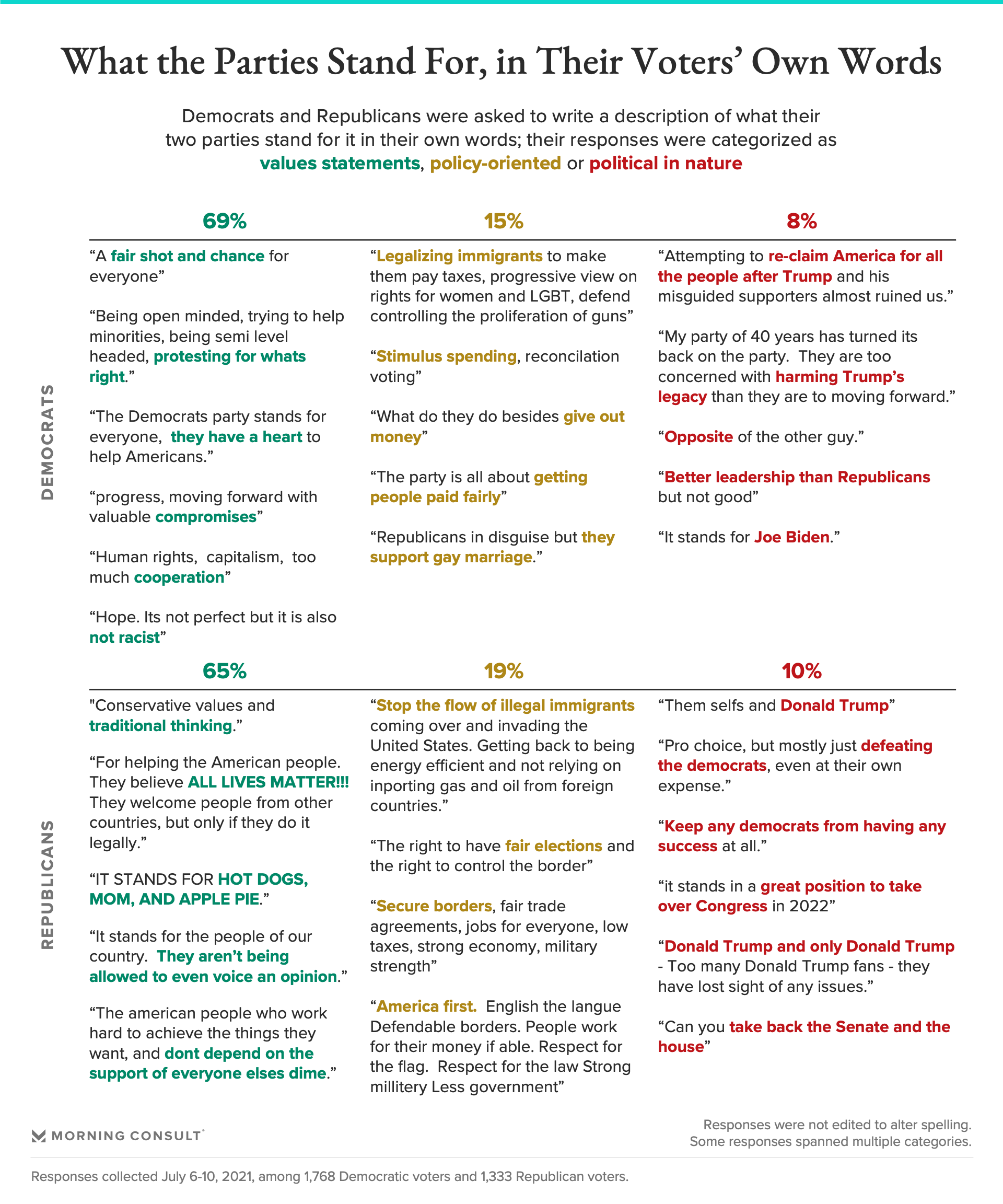 Some of this can be explained by the fact that Americans are just not all that attentive to the ups and downs of public policy, said University of Mississippi political science professor Julie Wronski, a factor that could be exacerbated by the comparatively docile White House led by President Joe Biden.

“I do think that we are in a polarized era in which specific policy differences are less important than broader, more affective connections to the parties, their leaders, and the social groups that they are thought to represent,” said Dan Hopkins, a professor of political science at the University of Pennsylvania who previously surveyed Americans about their perceptions of the Republican and Democratic parties, via email.

“But I suspect that this would have been true decades ago – some voters may worry about a specific policy, but many voters align themselves with the Republicans or Democrats for a variety of reasons that aren’t easily summarized by a single policy view.”

Democratic respondents were most likely to use the word “people.” One said the Democratic Party “stands for people like me and for every [A]merican,” while another noted that Democrats “are not socialists” but instead “for the betterment of our country and her people and they support those who are poor, have different ethnicities, the disabled, and more.”

That finding mirrors another from the survey, which found Biden to be less synonymous with Democratic Party than Trump is with the GOP, and comes after exit polling found that negative partisanship weighed more heavily on Biden voters than Trump voters in 2020.

With Democrats in power, the survey found Republican voters were slightly more likely than Democratic voters (11 percent to 7 percent) to raise negative sentiments when describing their party, though not all Democrats were happy. One Democratic respondent said the party stands for “compromise, posturing, fake wokeness, blaming failures on [R]epublicans, trying to get votes without committing to the agenda the people want.”

Among Republicans, there was a divide among dissenters. One said their party has become “too liberal” with Trump out of office, while another GOP dissenter aligned his or herself with the gentlewoman from Wyoming.

“I like Liz Cheney but she’s not approved of in congress,” the respondent wrote. “If [R]epublicans had her guts, we could accomplish some good instead of bending over backwards to please Trump.”

Related: Democrats’ Drive to the Left Threatens Their Grip on Power
Joe Biden State of the Parties