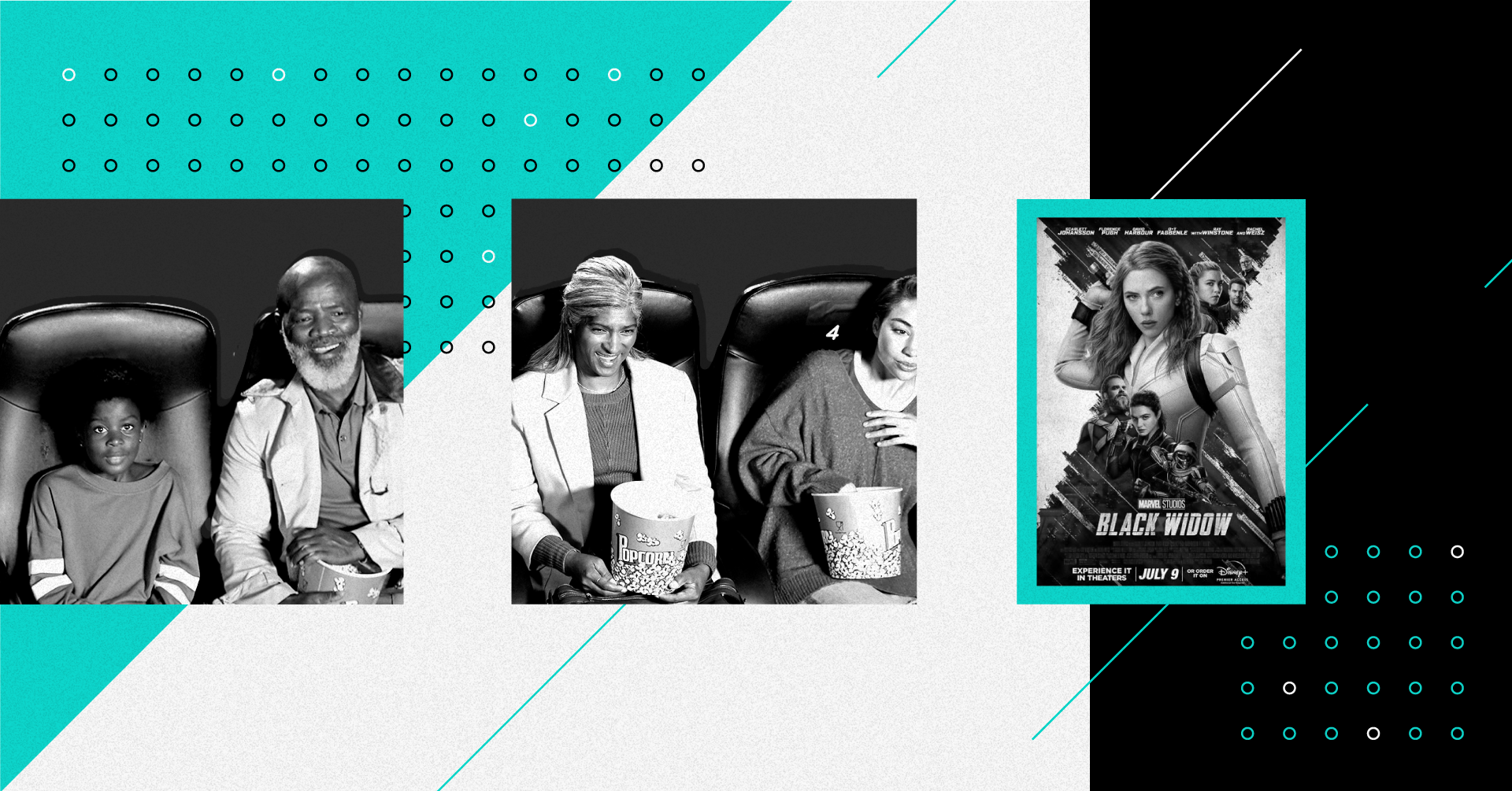 Given the ongoing coronavirus pandemic and consumers’ shifting consumption preferences, it didn’t come as a shock when Walt Disney Co. delayed the theatrical release of Marvel Studios’ “Black Widow” from May 7 to July 9, the day it also opened day-and-date on Disney+.

Waiting two months was the right move, Morning Consult data suggests, as consumer comfort nationwide increased in the weeks leading up to the July premiere.

But a smooth recovery for theaters is far from guaranteed, according to media analysts, as cinemas face a number of challenges moving forward, including the spread of the coronavirus’ delta variant and a number of theatrical releases debuting on streaming platforms. 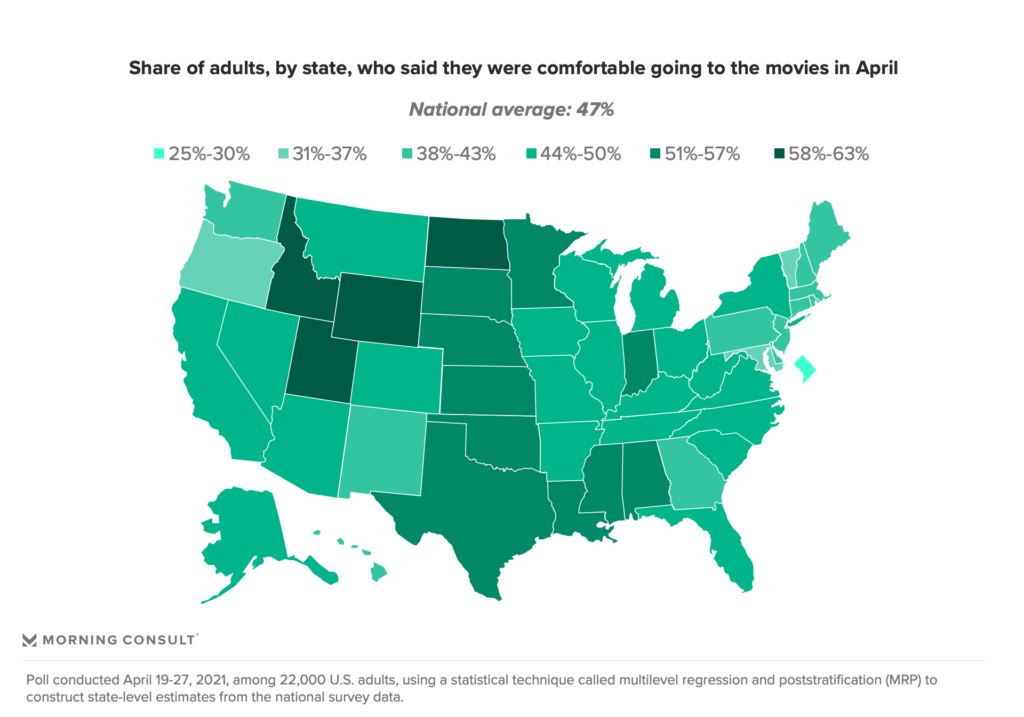 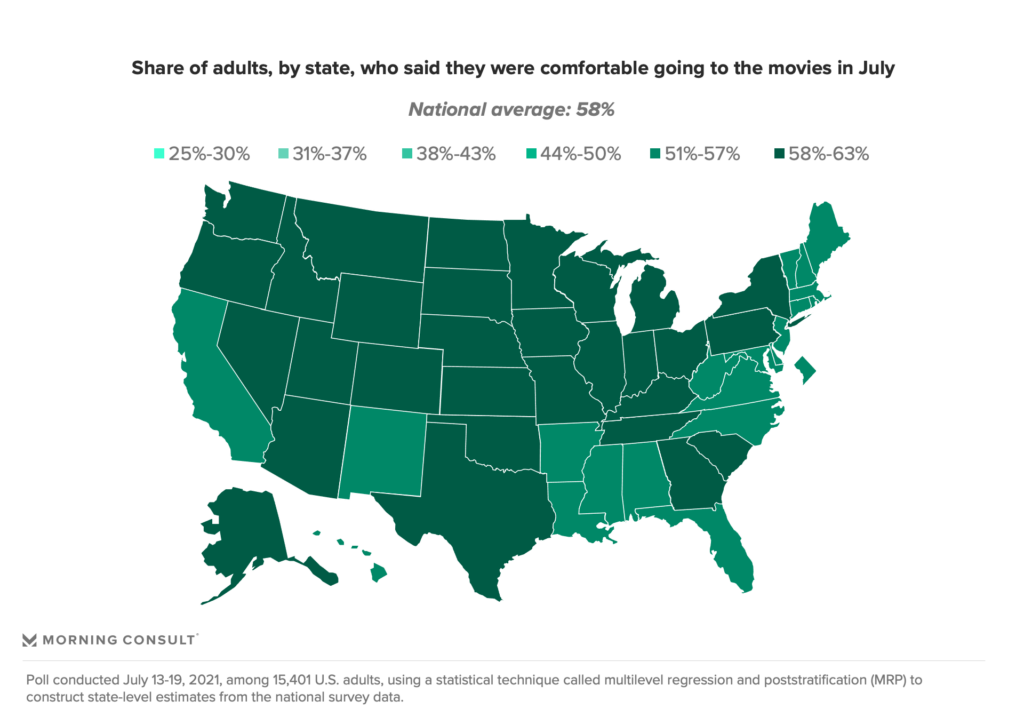 An April 19-27 Morning Consult survey of 22,000 U.S. adults found that nationwide, an average of 47 percent of consumers felt OK visiting a movie theater at that time, roughly one week before the initial release date of “Black Widow.”

Comfort climbed in subsequent weeks according to a separate survey conducted July 13-19 among 15,401 adults, with an average of 58 percent of adults nationwide expressing comfort returning to cinemas days after “Black Widow” hit theaters and Disney+.

“The Marvel brand is the mightiest force in movies right now, and has been for some time,” he said by email.

Related: Vaccinated Consumers Are Now About as Likely as the Unvaccinated to Express Comfort With a Return to Normal

But Bock warned that Exhibitor Relations’ data has seen signs it has already started to level off, an indication “that many consumers may not return for quite some time.”

Data from Morning Consult’s Return to Normal tracker shows that consumer comfort heading to the movies has hovered around 50 percent since May 30. It hit a high of 55 percent on July 4 but has ticked down since then.

The excitement surrounding “Black Widow’s” opening didn’t last long, as the film’s weekend box office fell 67 percent to $26.25 million in its second weekend, the sharpest second-weekend drop for a Marvel film. The decline prompted the National Association of Theatre Owners to issue a statement that argued the film’s simultaneous availability on Disney+ led to the steep decline and contributed to piracy.

Paul Dergarabedian, senior media analyst at Comscore Inc., said the accessibility of streaming can contribute to a box office drop off in subsequent weeks.

“If moviegoers have the ability to migrate from the big screen to the small immediately because the content is available there, then you’re going to see a big drop off like that in the second week,” he said.

But he said what’s more important to a movie’s gross receipts is the duration of the theatrical run. He pointed out that “F9,” which has only been available to see in theaters, experienced a decline following its opening weekend in June similar to that of “Black Widow,” but it has since become a clear success. As of Monday, “F9” had grossed more than $163 million domestically.

Yet Bock said the lack of consistency at the box office each week is concerning for theaters at such a critical time in the recovery process.

“Theaters are ultimately at the mercy of the audience, but with the monkey wrench that is the pandemic, it’s going to be very difficult to gauge what is keeping audiences away,” he said in an email. Discounts on concessions and “buy one, get one” deals are “a surefire way to stir up interest, but even that may not be enough as variants ravage the landscape.”

A Morning Consult survey in March found that free or discounted movies and concession items were likely to persuade uncomfortable consumers to check out a movie in theaters, but that was well before the delta variant became a widespread concern in the United States.

The releases of early summer blockbusters such as “Godzilla vs. Kong,” “A Quiet Place Part II” and “F9,” which each set pandemic-era records in their respective opening weekends, have served as measuring sticks of the industry’s health over the past month. While “Black Widow” showed there is still plenty of interest in heading to the movies, there are still important milestones ahead.

Dergarabedian has his eye on the Oct. 8 premiere of “No Time to Die,” the new James Bond film, which is expected to be a theatrical-only release.

Bock, however, is on the lookout for a different benchmark: “A $100 million opening,” he said. “That’s the next checkpoint.”