GOP Voters Continue to Disassociate Their Party From Jan. 6 in Wake of Select Panel’s First Hearing 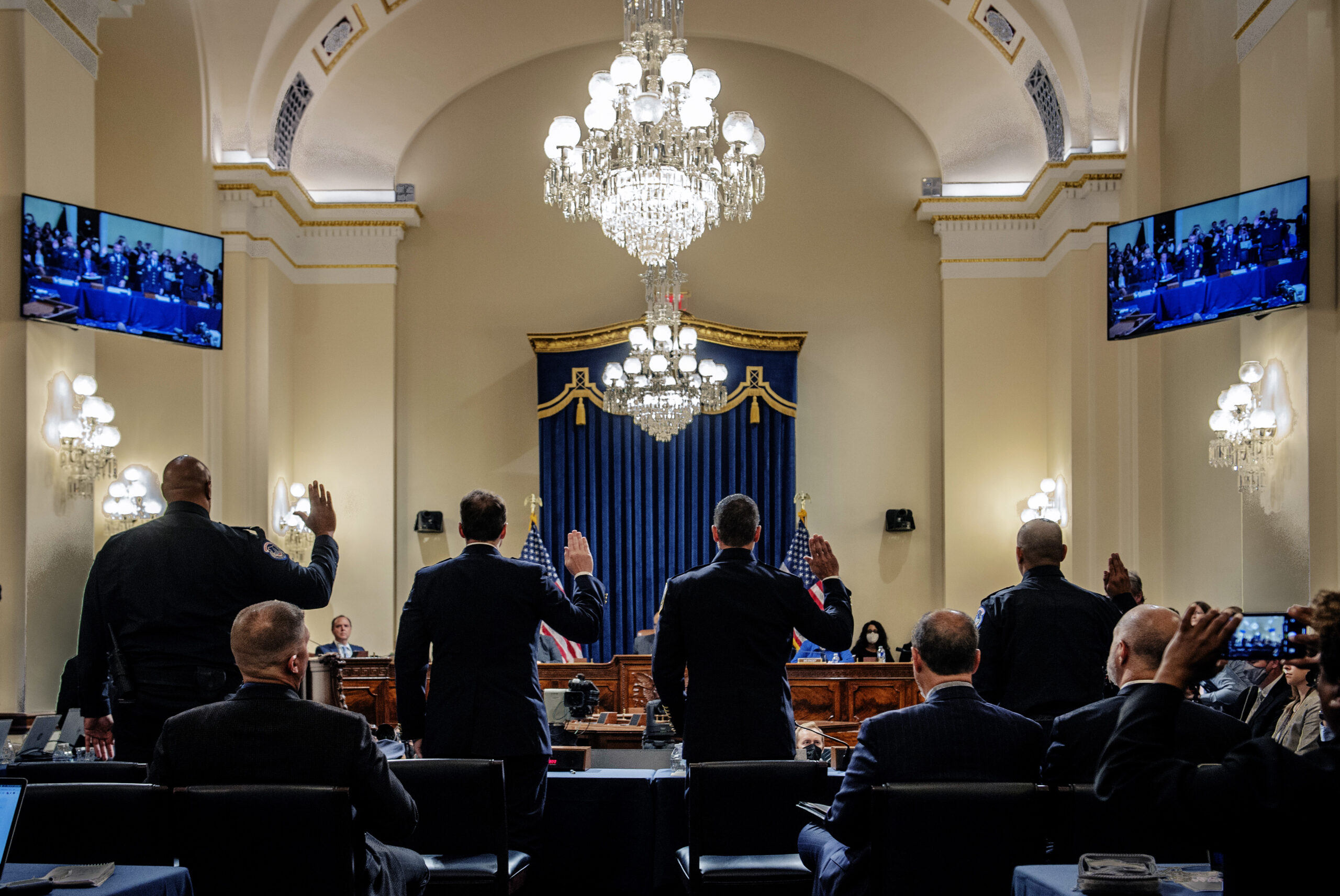 Law enforcement witnesses rise to be sworn in Tuesday before the House select committee investigating the Jan. 6 Capitol riot. In the wake of the panel's first hearing, new polling shows GOP voters are continuing to disassociate their party from the deadly clashes on Capitol Hill earlier this year. (Bill O'Leary - Pool/Getty Images)
By Eli Yokley

The first hearing of the House select committee investigating the Jan. 6 Capitol attack gripped much of Washington, with police officers testifying about their clashes with what they vividly described as a mob inspired by then-President Donald Trump.

But outside of the nation’s capital, a new Morning Consult poll suggests that the panel — whose members were appointed by House Speaker Nancy Pelosi (D-Calif.) — is largely preaching to its own choir, as relatively few Republican voters viewed or listened to the daytime hearing and even more are seeking to disassociate their party and its leader from the deadly riot.

According to the July 28-29 survey, less than half of voters (49 percent) said they tuned in to at least some of the hearing live, with 1 in 10 saying they watched it in full. Three in 5 Democrats said they caught at least part of the 3.5-hour session live, while 39 percent of Republicans said the same. 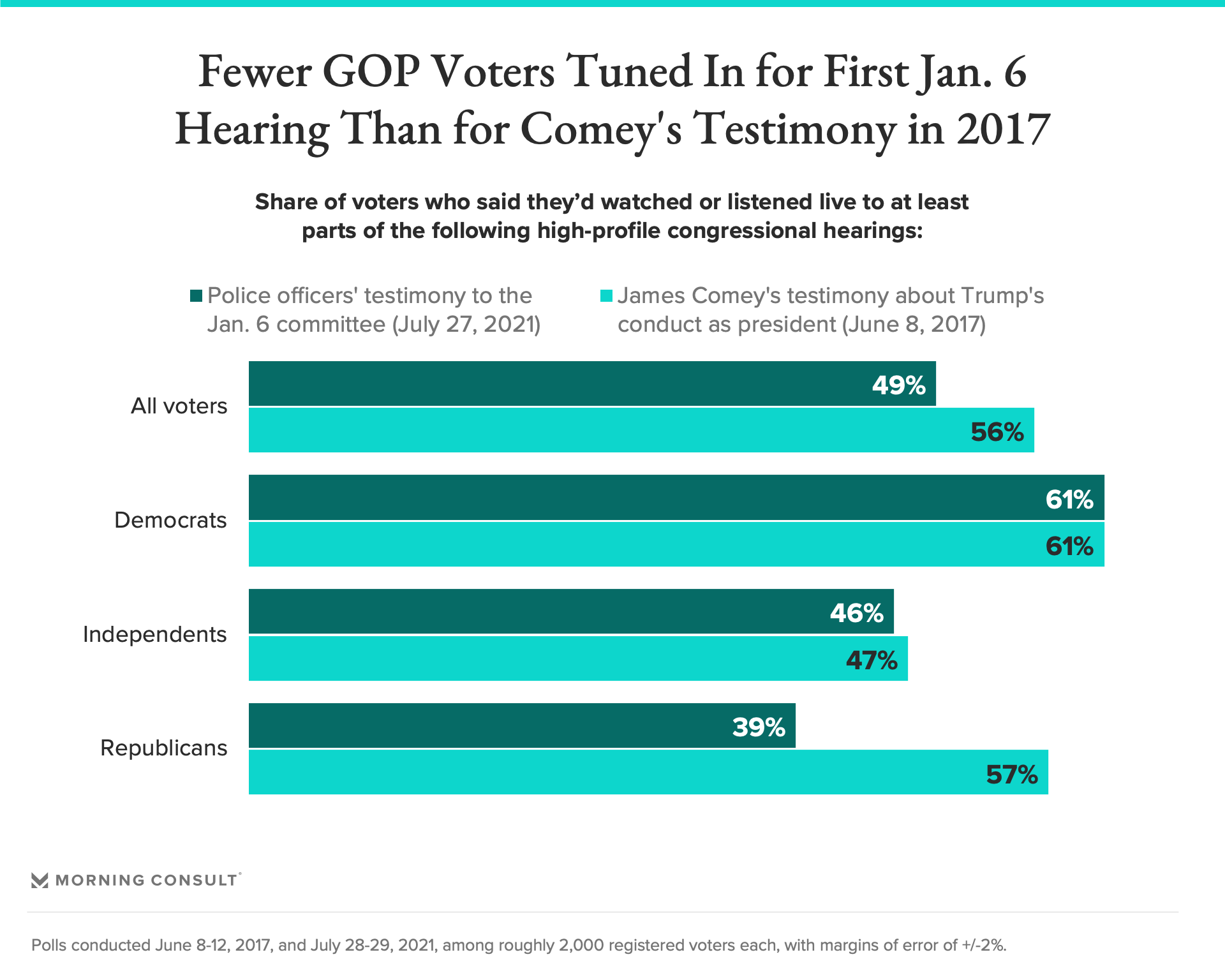 Reported viewership of the Jan. 6 committee’s first hearing was less than the share who watched one of the first major high-profile hearings of Trump’s presidency, when fired Federal Bureau of Investigation Director James Comey appeared before the Senate Intelligence Committee on June 8, 2017, to testify about Trump’s behavior and Russian interference in the 2016 presidential election, according to Morning Consult polling conducted at the time.

The Jan. 6 hearing is one of many developments in Washington that have earned less attention from the public thanks to Joe Biden’s comparatively placid presidency – and comes as Republican leaders have pushed to delegitimize the committee itself after Pelosi rejected some of House Minority Leader Kevin McCarthy’s (R-Calif.) appointees over their past statements and actions and appointed two GOP lawmakers who have been critical of Trump.

At the first committee hearing, D.C. police officer Daniel Hodges urged lawmakers to “address if anyone in power had a role in this,” adding, “I think the majority of Americans are really looking forward to that as well.” He and the other officers who testified pointed their fingers directly at Trump, whom voters are decreasingly likely to blame for the Jan. 6 attack. 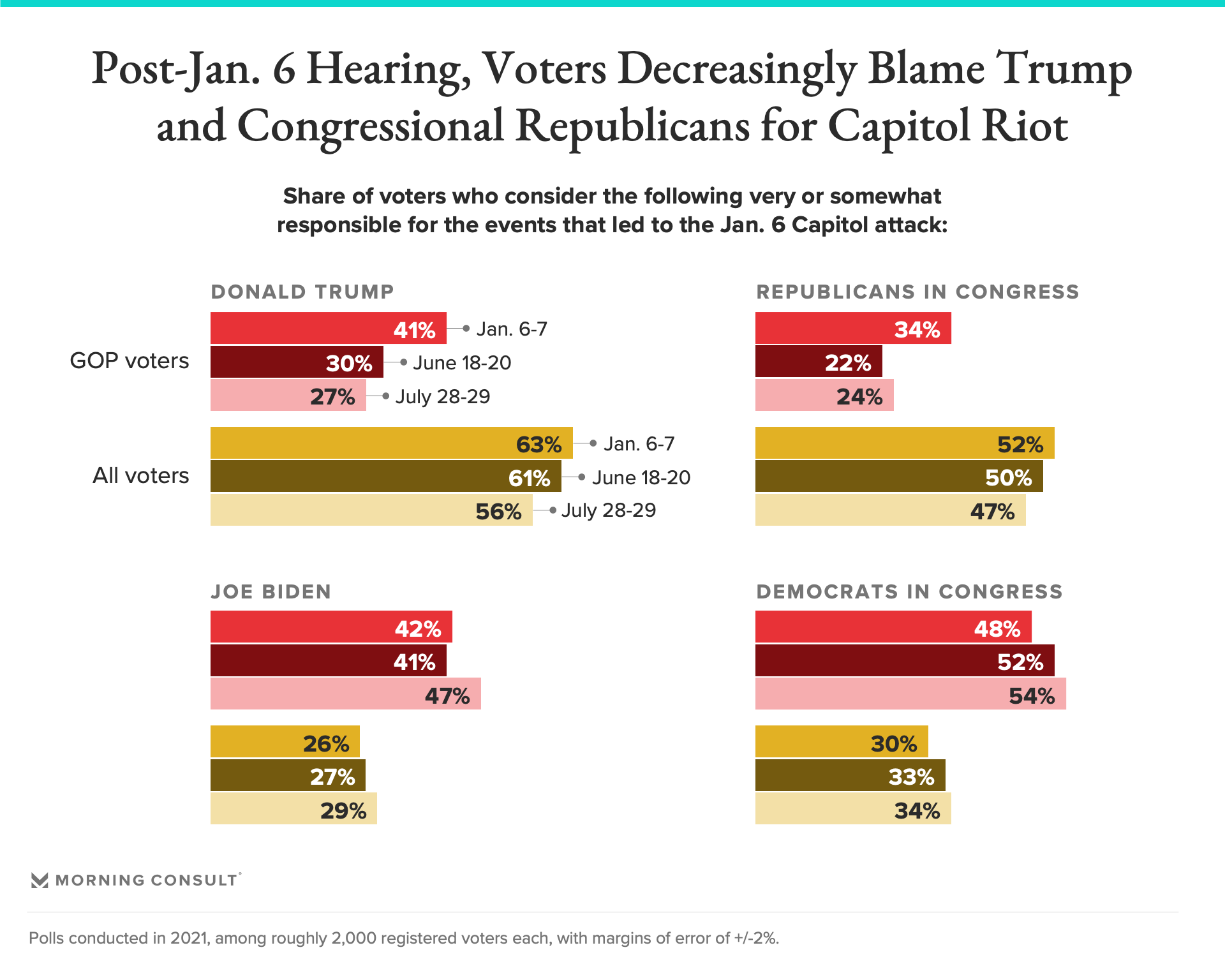 The survey found that 56 percent of voters said the 45th president is at least somewhat responsible for the mob of his supporters who stormed the Capitol, down 5 points since a survey conducted last month. Those trends indicate that unless the panel, which is armed with subpoena power, is able to unearth some new information about Trump’s conduct as it relates to Jan. 6, perceptions of his culpability for the riot have likely already hit their high-water mark.

The drop in the share assigning blame to the former president has chiefly been driven by Republicans: Twenty-seven percent say he is at least somewhat responsible, down 3 points from last month and a 14-point drop since immediately after the Jan. 6 riot. Since June, the share who blame Biden increased 6 points, to 47 percent, and even more blame Democrats in Congress (54 percent) and Pelosi (59 percent).

McCarthy and House Republican Conference Chair Elise Stefanik (R-N.Y.) both pre-empted the Tuesday hearing by trying to shift blame for the Jan. 6 attack to the House speaker, who along with the Senate’s majority leader is involved in overseeing Capitol security’s leaders.

McCarthy has also said the panel was undergoing a “sham process,” a line of attack that appears to have struck a nerve with the party’s base but has not resonated with the broader electorate. 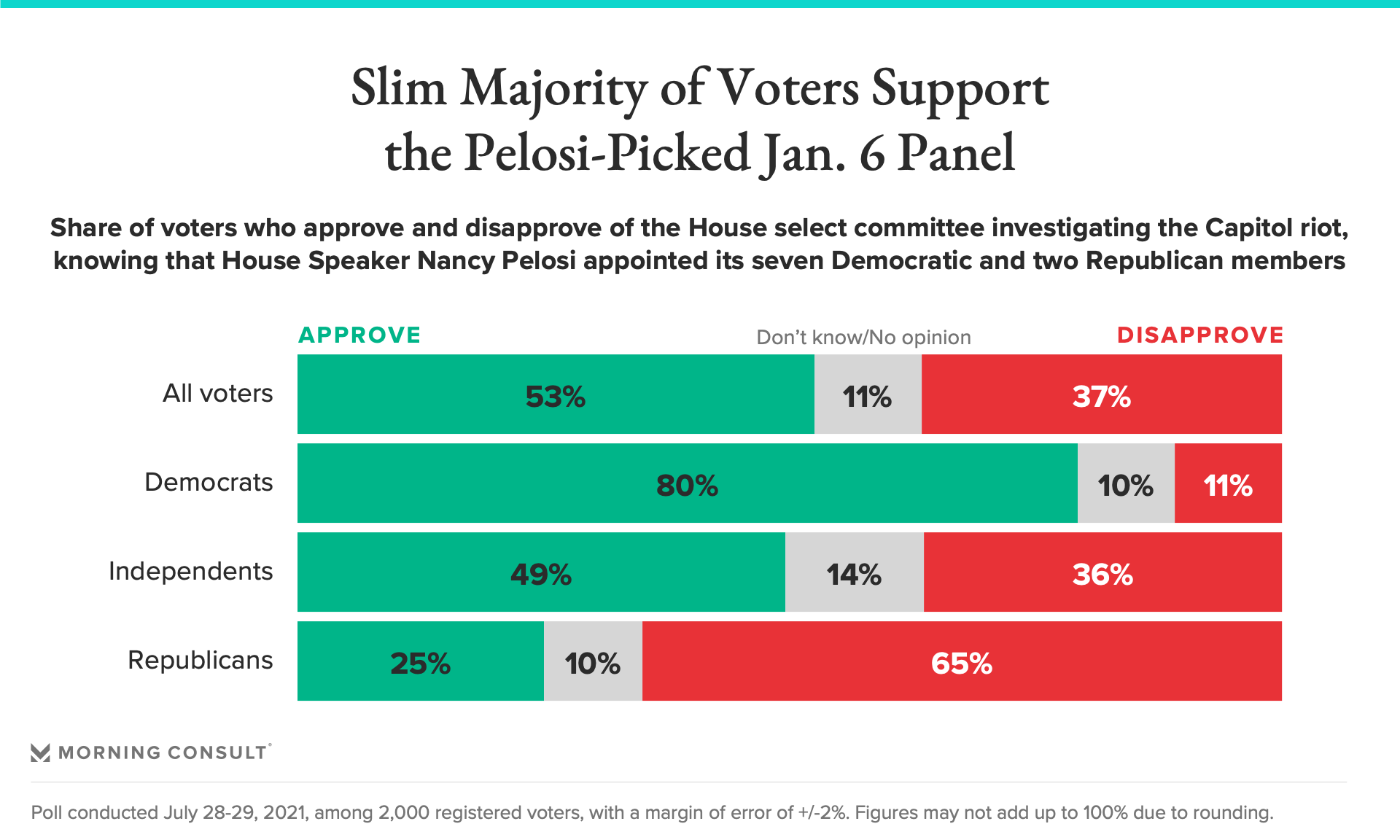 Just over half of voters (53 percent) — including 4 in 5 Democrats, about half of independents and a quarter of Republicans — approve of the House select committee’s investigation of the Capitol riot, even knowing that Pelosi appointed its seven Democratic and two Republican members. The bulk of Republican voters (65 percent) said they disapprove of the panel – 13 percentage points higher than the share who said in a recent survey that they opposed the formation of an investigative commission in general.

Correction: Previous versions of two charts in this story misstated when the latest poll was conducted.
Congressional Politics