Health Officials Want People to Wear Masks Again. About 2 in 5 Adults Say They ‘Always’ Will 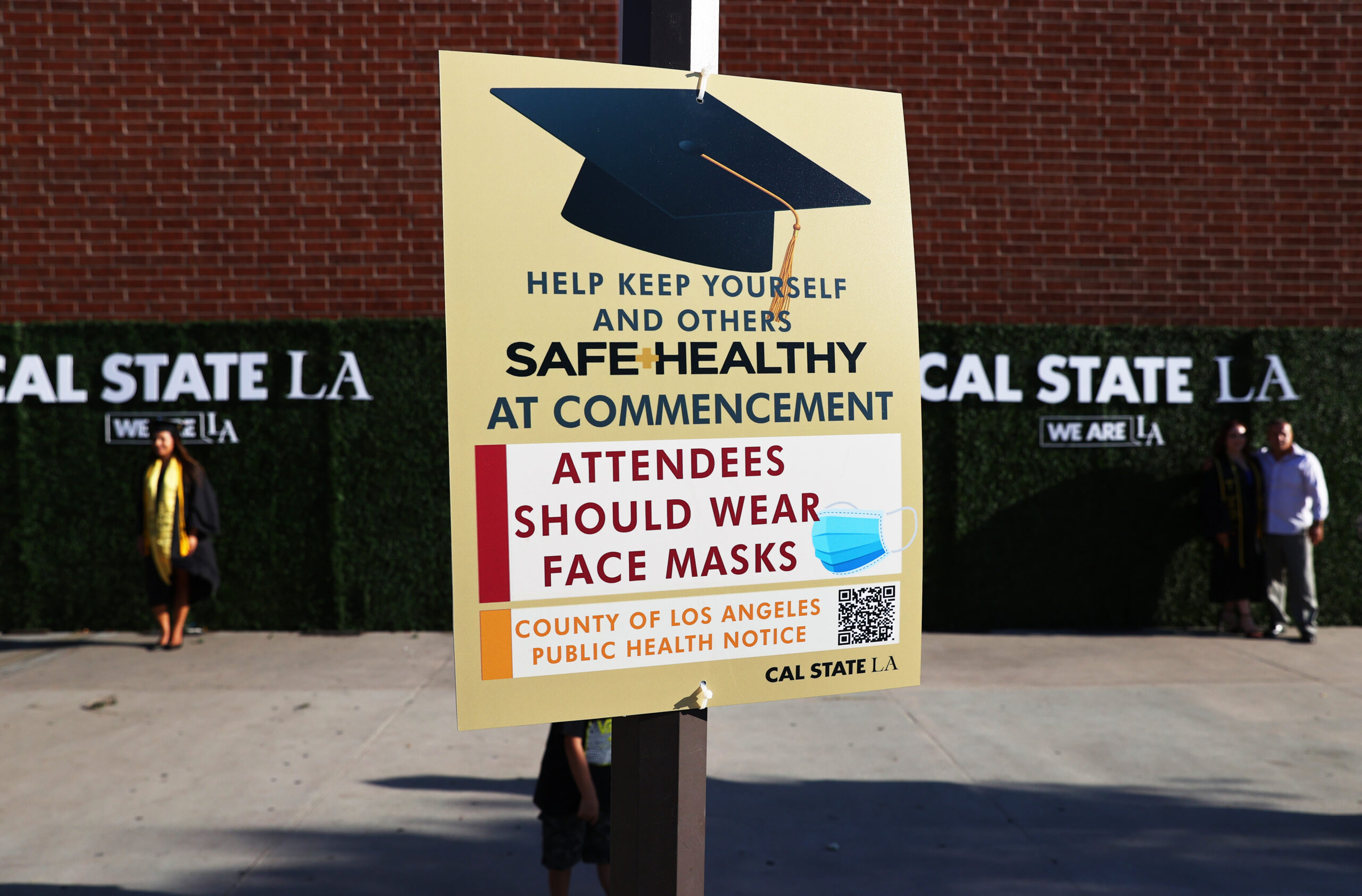 A sign urges the use of face masks for a Cal State Los Angeles commencement ceremony, which was held outdoors beneath a tent on campus on July 27, 2021, in Los Angeles, Calif. (Mario Tama/Getty Images)
By Gaby Galvin

As officials scramble to mitigate the spread of the delta variant by reissuing mask mandates, a new Morning Consult/Politico survey indicates not all Americans are willing to go back to wearing masks in public — and their views are more closely tied to their political leaning than their vaccination status.

Louisiana and San Francisco joined a rising number of cities, states and businesses to reinstate mask mandates this week, and the Centers for Disease Control and Prevention is recommending that people wear masks in indoor public settings regardless of their vaccination status in COVID-19 hot spots. In light of the CDC guidance, the survey shows 58 percent of U.S. adults plan to wear masks “always” or “most of the time” in indoor public spaces going forward, though some groups are less likely to say as much.

While 63 percent of vaccinated adults said they’ll always or mostly wear masks, for example, just 48 percent of those who aren’t fully vaccinated said the same. The split is even wider by political affiliation, with 77 percent of Democrats saying they’ll mask up all or most of the time compared with 37 percent of Republicans, according to the survey, which was conducted July 31-Aug. 2. 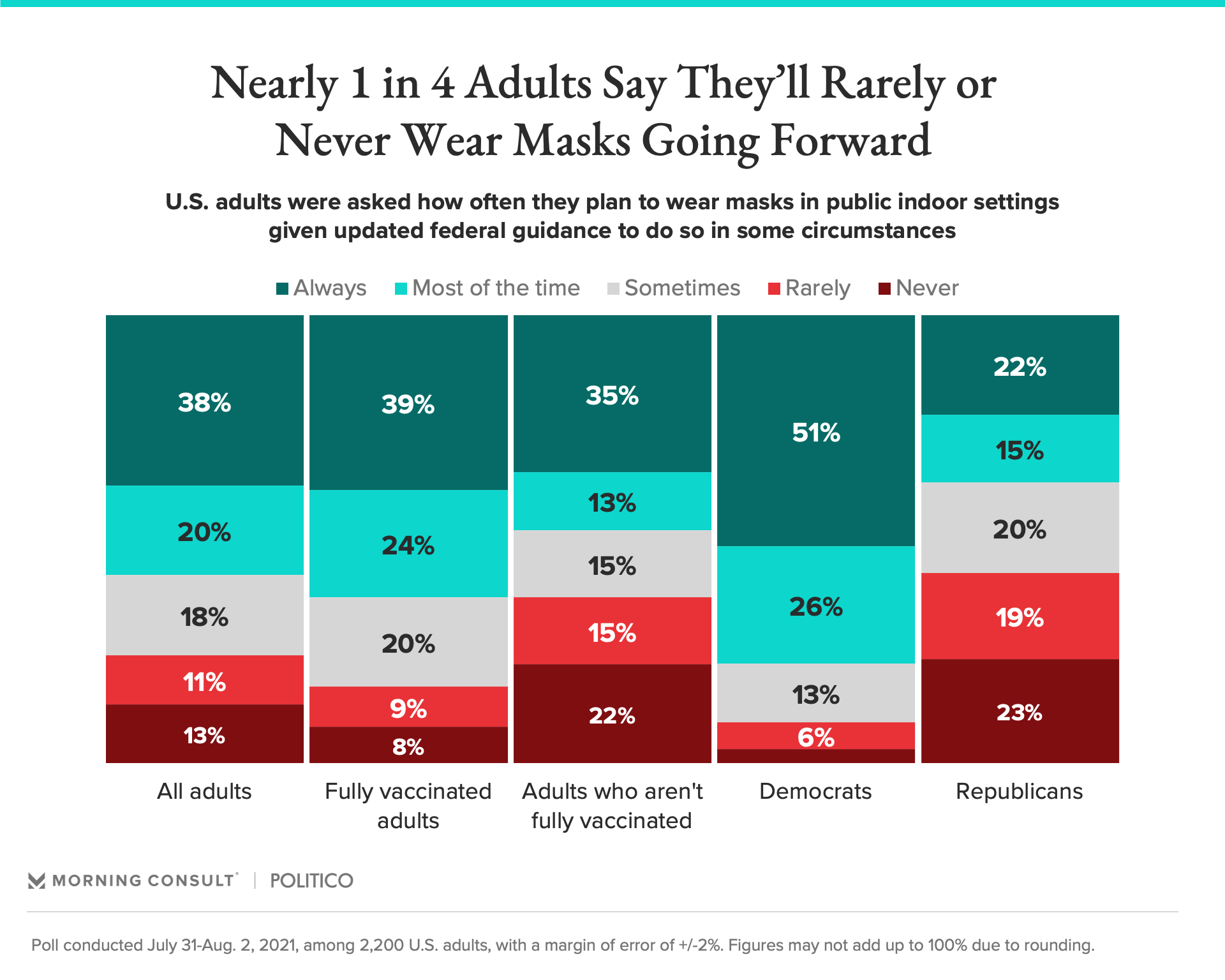 The 40-percentage-point gulf between adults of different political affiliations may reflect how opting to wear a mask — or not — evolved into a means of expressing loyalty to a group during the pandemic. In Morning Consult polling, strong supporters of former President Donald Trump were consistently less likely to say they believe masks are effective in preventing the spread of the coronavirus. And in March, Democratic voters were significantly more likely than GOP voters to say they’d continue social distancing and wearing masks even if state requirements were dropped.

While conservative media and Republican lawmakers have been publicly pushing vaccine holdouts to get a COVID-19 shot in recent weeks, they also criticized the CDC for flip-flopping on its masking guidance, with House GOP Leader Kevin McCarthy (Calif.) saying on Twitter that “President Biden’s CDC can’t make up its mind.”

CDC Director Dr. Rochelle Walensky told reporters Monday that the reinstated mask guidance came after new data showed how contagious the delta variant of the coronavirus is, even among vaccinated people, although “this remains a pandemic of the unvaccinated, where the vast majority of spread is.”

The latest survey picked up similar divides when it comes to potential mask mandates: Democrats and vaccinated adults were more likely than Republicans and those who aren’t fully vaccinated to be in favor of mask mandates from the federal government, states or localities. Again, the divides were significantly wider by political affiliation than by vaccination status.

Overall, 69 percent of adults said local governments should put mask mandates in place — and were roughly split on whether those rules should apply indoors only or both indoors and outdoors — while another 31 percent said localities shouldn’t issue mask requirements. Those levels were similar for both the federal and state governments. 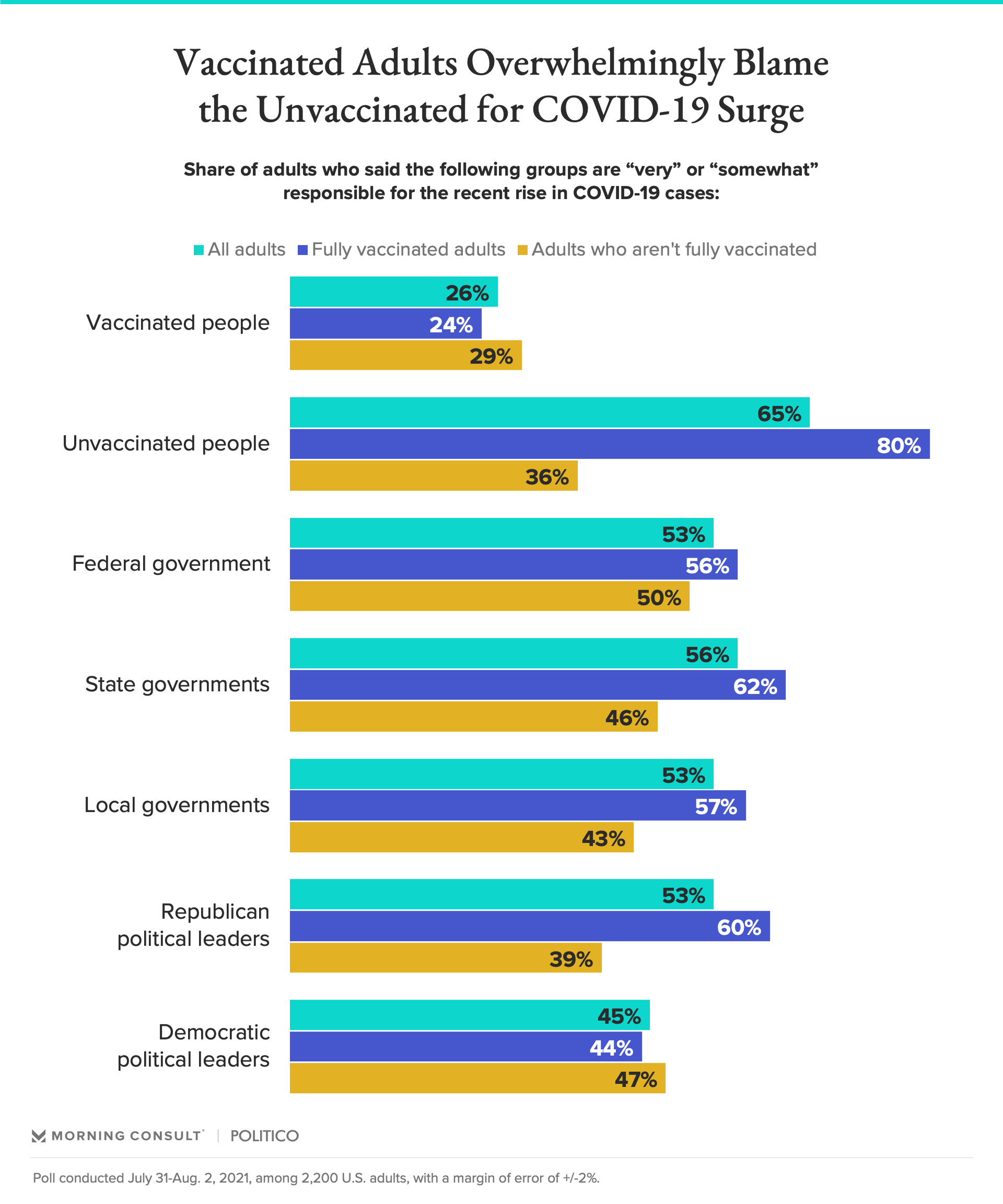 The findings also reflect divisions in the public’s perception of who is to blame for the recent uptick in infections, with 4 in 5 vaccinated adults saying their unvaccinated counterparts are causing the increase. Those who aren’t fully vaccinated were more likely to blame the federal government than any other group, at 50 percent.

Democrats and Republicans agreed that unvaccinated adults are the group most to blame for the recent surge. Democrats then pointed to GOP political leaders and state governments, while Republicans blamed the federal government and Democratic politicians.

The poll was conducted among 2,200 adults and has a 2-point margin of error.