About 1 in 2 Voters Support New Eviction Moratorium, but They’re Uneasy About the CDC’s Authority to Issue It 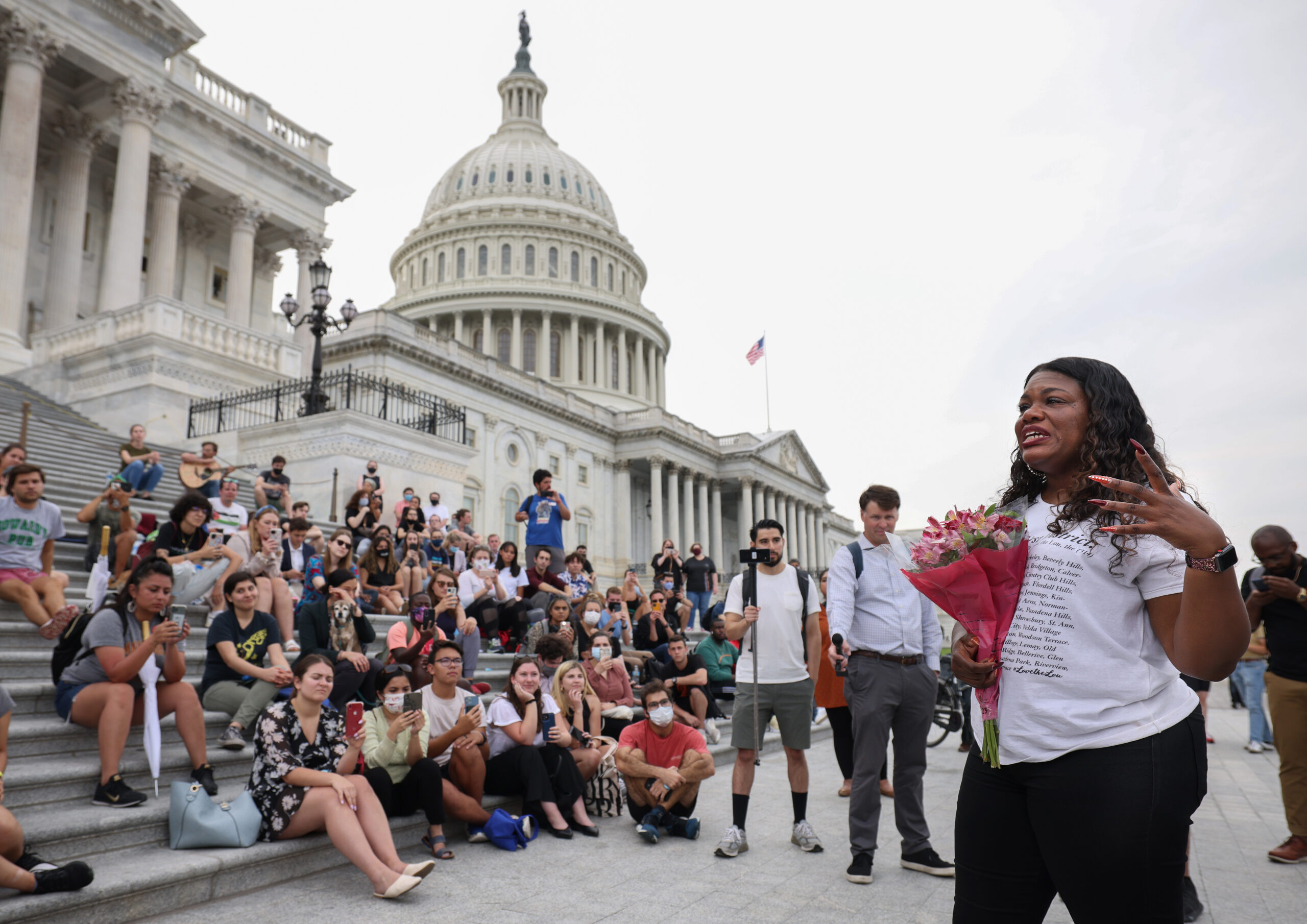 Rep. Cori Bush (D-Mo.) speaks to supporters at a rally on the eviction moratorium at the U.S. Capitol on Aug. 3, 2021, in Washington, D.C. A Morning Consult/Politico poll found that 53 percent of voters support the Centers for Disease Control and Prevention issuing a new federal ban on evicting renters who live in areas with “substantial” or “high” COVID-19 transmission rates through Oct. 3. (Kevin Dietsch/Getty Images)
By Claire Williams

Renters got a reprieve last week when the Biden administration decided to issue a new federal eviction moratorium until early October in areas with “substantial and high levels” of COVID-19 transmission.

A slim majority of voters applauded the decision, although the enforcement power that the Biden administration used to do it has been met with skepticism, according to a new Morning Consult/Politico poll.

The move to once again temporarily ban evictions, a decision that came after protests on Capitol Hill from Rep. Cori Bush (D-Mo.) and other progressive lawmakers and despite legal uncertainty, has support from 53 percent of voters. One in 3 voters said they opposed the decision. 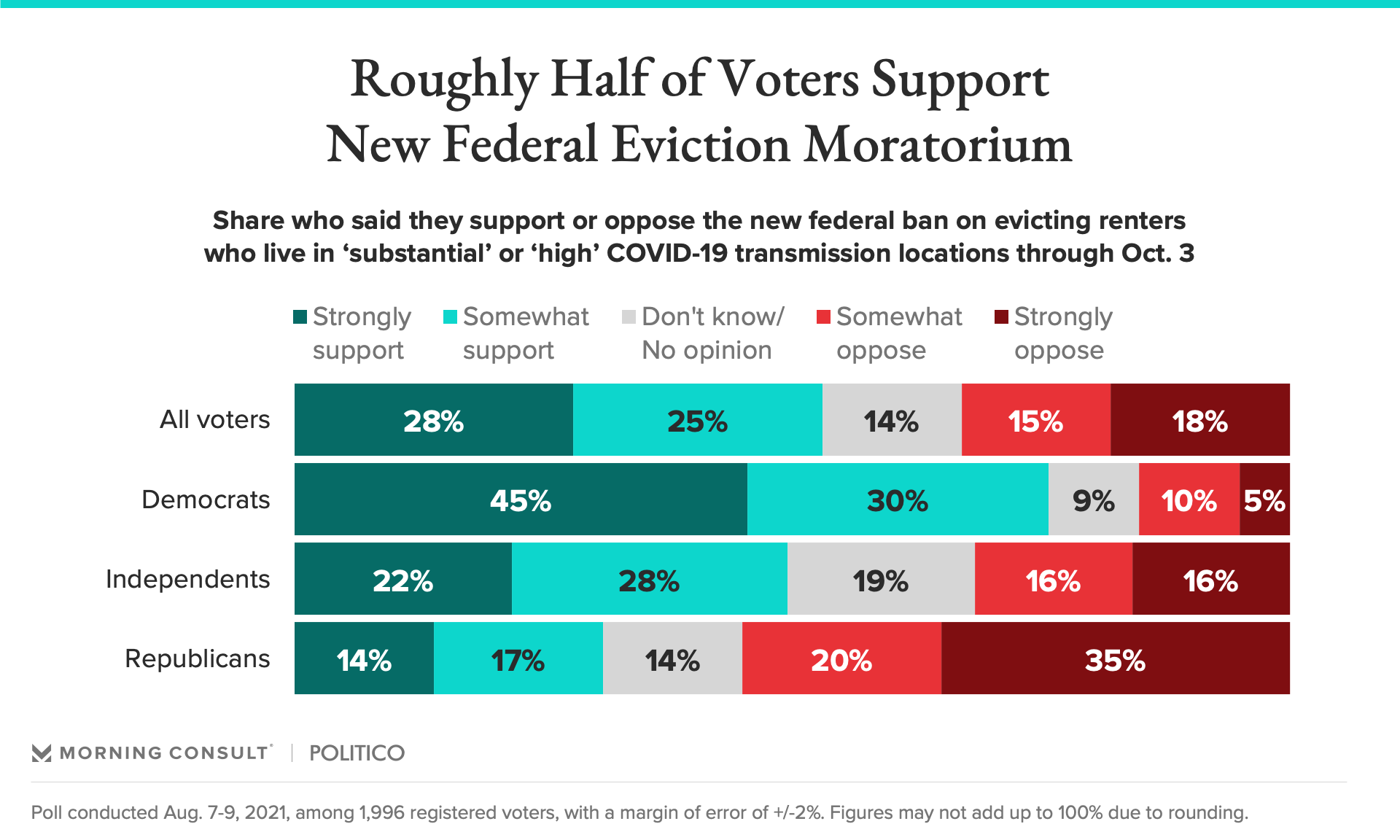 Predictably, support trended higher among Democrats, with 75 percent backing the new order and only 15 percent opposed. Thirty-one percent of Republicans said they support the eviction moratorium being issued again, while 55 percent opposed it.

Independents just about split the difference, with 50 percent in support.

Far fewer voters, however, are comfortable with how the Biden administration has pursued the new ban on evictions.

Originally, the Biden administration allowed the moratorium to expire, citing legal challenges. In May, a federal judge said the Centers for Disease Control and Prevention didn’t have the legal authority to issue an eviction ban, though the Supreme Court later allowed the order to stand through July 31. The same federal judge, meanwhile, suggested Monday that the new order was a product of legal “gamesmanship” from the Biden administration.

Forty-five percent of voters agree that the CDC shouldn’t have the authority to issue the eviction moratorium in significant or high transmission areas through Oct. 3.

Thirty-six percent of voters said the agency should be allowed to do so. 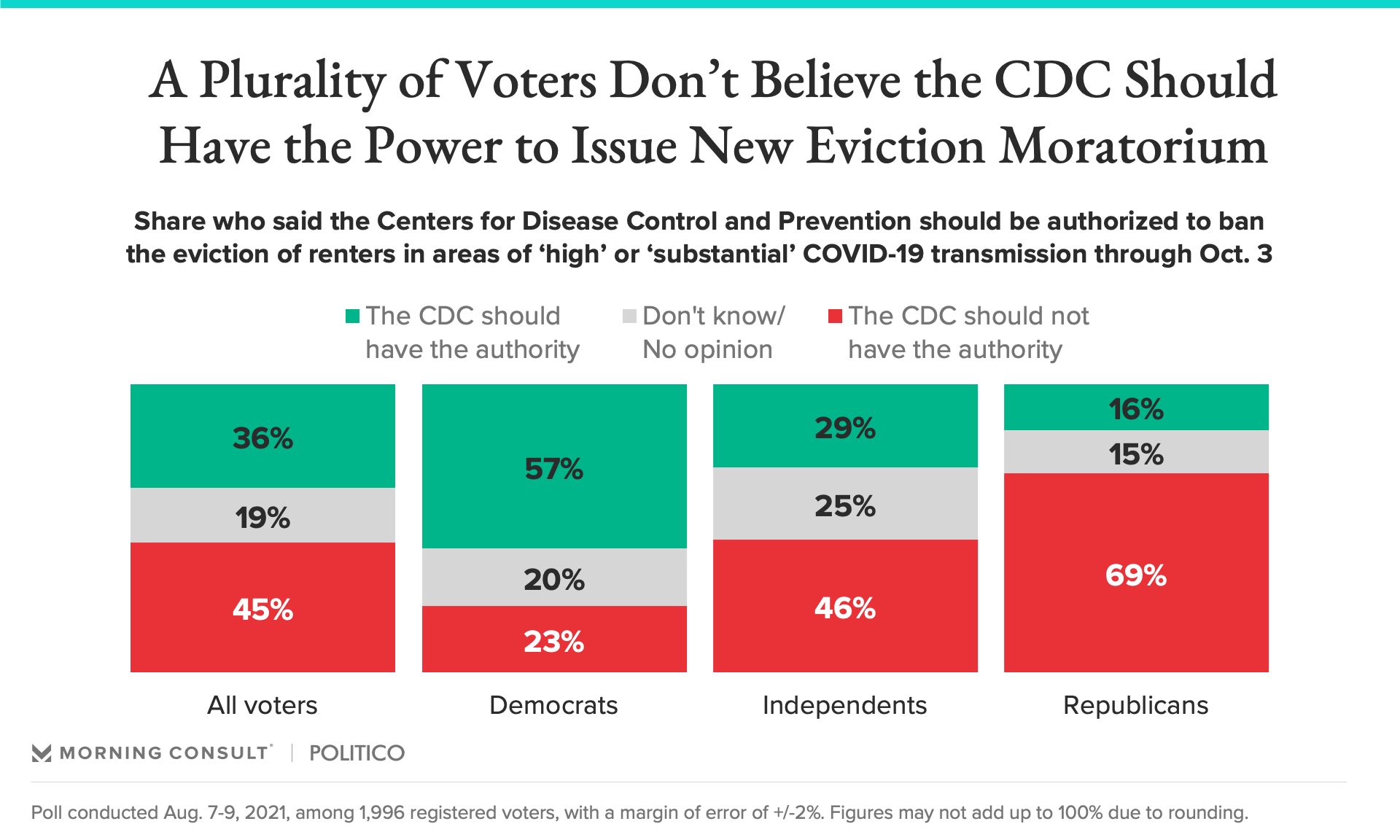 Democrats are far more likely to believe that the CDC has the authority to enforce the eviction moratorium, but their support for that authority is much lower than it is for the measure itself. Fifty-seven percent said the CDC should have the authority, while 23 percent said it shouldn’t.

Nearly 7 in 10 Republicans said the CDC shouldn’t have this ability, while 16 percent said the agency should.