Concerts Have Returned Amid the Delta Variant Surge. Will Consumers Follow? 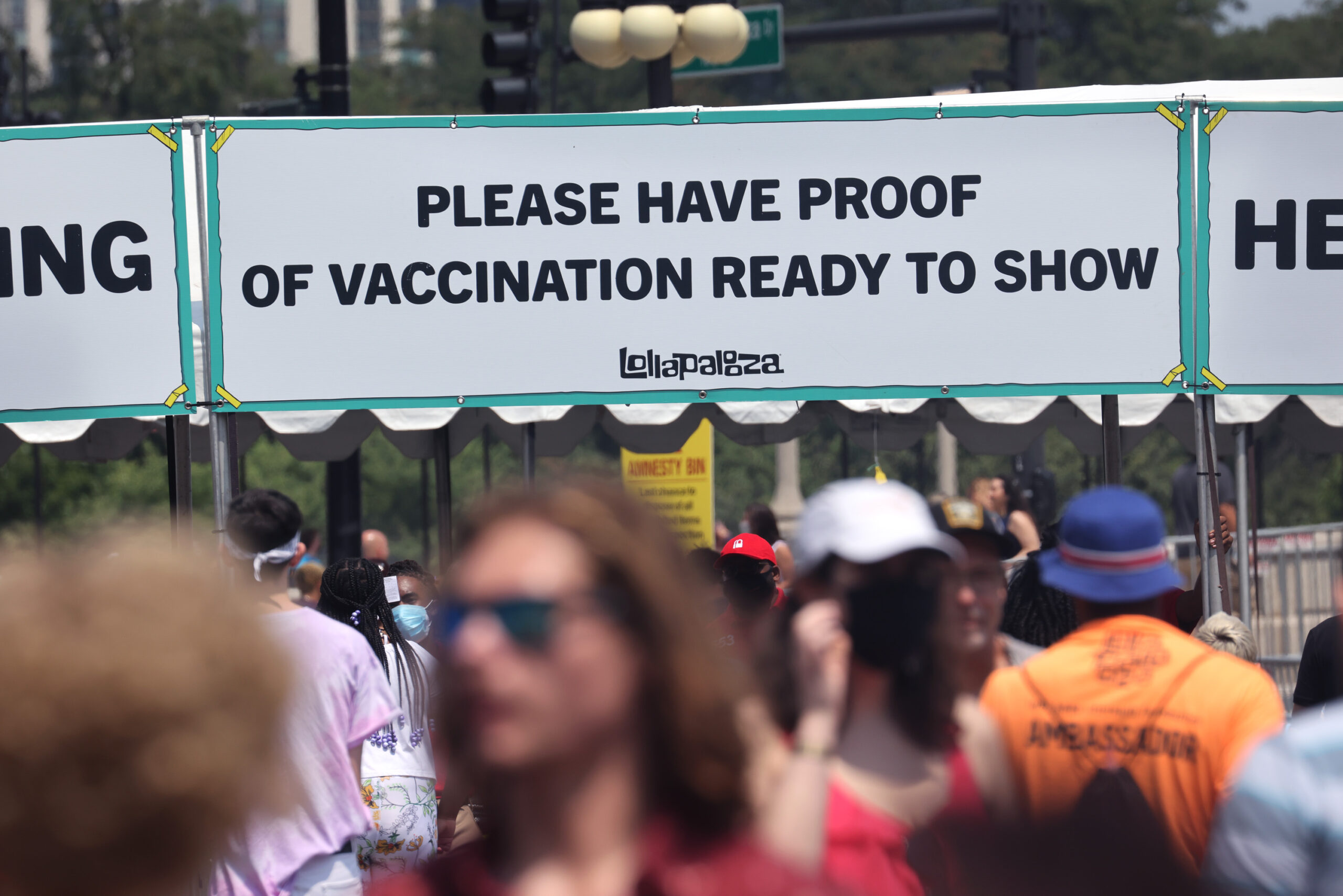 Guests are asked to show proof of having been vaccinated against COVID-19 as they arrive for the first day of the Lollapalooza music festival on July 29 in Chicago. Fewer than 2 in 5 U.S. adults said they would feel comfortable attending a concert, according to Morning Consult's latest Return to Normal tracking data. (Scott Olson/Getty Images)
By Sarah Shevenock

Shreeya Majmudar, a 24-year-old graduate student, had been missing the live concert experience, so the vaccinated Chicago resident scooped up tickets to see Twenty One Pilots and the Brothers Osborne this fall.

But then came concerns over the coronavirus’ delta variant, which was on her mind when she recently viewed footage of the multiday music festival, Lollapalooza.

“I saw the crowds and everything, and that kind of freaked me out a little bit,” Majmudar said, adding that she plans to stay socially distant from other concertgoers at her shows later this year.

While Chicago’s Department of Public Health Commissioner said the music festival, which required vaccination or proof of a negative COVID-19 test for entry, was not to blame for the city’s recent surge in coronavirus cases, Majmudar’s concern reflects the recent decline in consumer comfort with attending concerts as the public adjusts to the evolving state of the pandemic and the Centers for Disease Control and Prevention’s most recent recommendation that people should use masks indoors in high-risk regions.

For the second week in a row, 38 percent of U.S. adults said they would feel OK going to a concert, according to Morning Consult’s Return to Normal tracker, which represents a decline of 6 percentage points since early July. To improve consumer comfort, new polling shows that stringent safety measures are most likely to persuade consumers to head to a concert, though the coronavirus’ delta variant could provide a challenge.

Some artists are likely to further postpone tours because of the risk that their concerts could become a superspreader event, Pete Smolin, president of Upward Spiral Music and board member of Music Managers Forum-US, said in an email, but “if you require vaccination or a negative test for entry, and insist on universal masking within the concert space, the show should be able to safely go on.”

However, implementing policies that will make consumers eager to return comes with its own challenges, particularly when rules and guidelines vary by location. For example, New York City is requiring consumers to prove they are vaccinated to participate in certain indoor activities, including attending a concert. However, in Florida, Republican Gov. Ron DeSantis has banned vaccine passports.

“This industry and the venues — it’s not a monolith,” said Audrey Fix Schaefer, communications director for I.M.P., 9:30 Club, Lincoln Theatre, The Anthem and Merriweather Post Pavilion, and vice president of the board of directors and communications director for the National Independent Venue Association. “It’s different in every jurisdiction so it’s hard to speak as an industry when so many of the circumstances are local.”

This confusion is also contributing to hesitancy among consumers.

Grace Hall-Ramsey, a 21-year-old athleisure brand ambassador from Baltimore who went to three or four concerts a month before the pandemic, was planning to go back to attending shows at a similar pace, but she’s now having second thoughts.

“This new delta variant is really big on my mind right now, because a few of the shows I will be traveling domestically for,” Hall-Ramsey said. “The difference in mask mandates and vaccination proof across states is so different that, even if I’m careful, I’m worried that other people aren’t going to be careful. It’s just kind of like, ‘What’s it worth?’”

For now, she plans to go to the concerts but will wear a face mask regardless of whether or not it’s mandated by the venue.

A July 29-Aug. 1 Morning Consult survey asked 2,200 U.S. adults what was most important to them when deciding to attend a concert: additional safety measures meant to curb the spread of COVID-19 or deals for tickets or related items. Fifty-one percent said the safety measures were most important, compared to 27 percent who said the same of the deals.

Respondents were asked if the following safety measures would make them more interested in attending different types of concerts:

Looking specifically at consumers who were uncomfortable attending both indoor and outdoor concerts, improving sanitizing measures and air filtration, limiting the number of attendees or distancing concertgoers, and installing hand sanitizers would all make them more interested in attending concerts. Requiring all concertgoers to be vaccinated or wear face masks ranked lower.

Elham Mohamud, a 24-year-old communications manager, hasn’t purchased any new concert tickets during the pandemic due to concerns about crowds, but plans to attend several Harry Styles concerts that were rescheduled from last year.

“I think the best thing is to make it vaccinated people only or you have to have a negative test,” Mohamud said, adding that New York’s Madison Square Garden and Los Angeles’ the Forum have vaccination requirements and mandatory testing, which alleviate her concerns enough that she won’t be canceling her plans.

A switch to a mobile ticketing system can also increase consumer safety during the pandemic, said Adam Goodyer, chief executive of Realife Tech, because it reduces contact between employees and concertgoers, along with crowding in lines.

Contact-free payment methods were favored by just over half of uncomfortable consumers in the survey, though they ranked below improved sanitation and ventilation.

Free or Discounted Tickets Could Bring Wary Consumers Back to Concerts

Respondents were asked if the following promotions would make them more interested in attending an indoor or outdoor concert:

Live Nation Entertainment, which did not respond to an interview request, has also courted consumers with discounted tickets. As part of its “Return to Live” initiative, the company recently sold $20 tickets to concerts including Alanis Morissette, Brad Paisley and Pitbull.

But Fix Schaefer said the fastest and most efficient way to get the live music industry back on track is simple: Non-vaccinated consumers need to get their shots.