Nike, Coca-Cola Are the Brands Most Associated With the Olympics

19% of consumers say they most associate Nike with the games; 8% say Coke 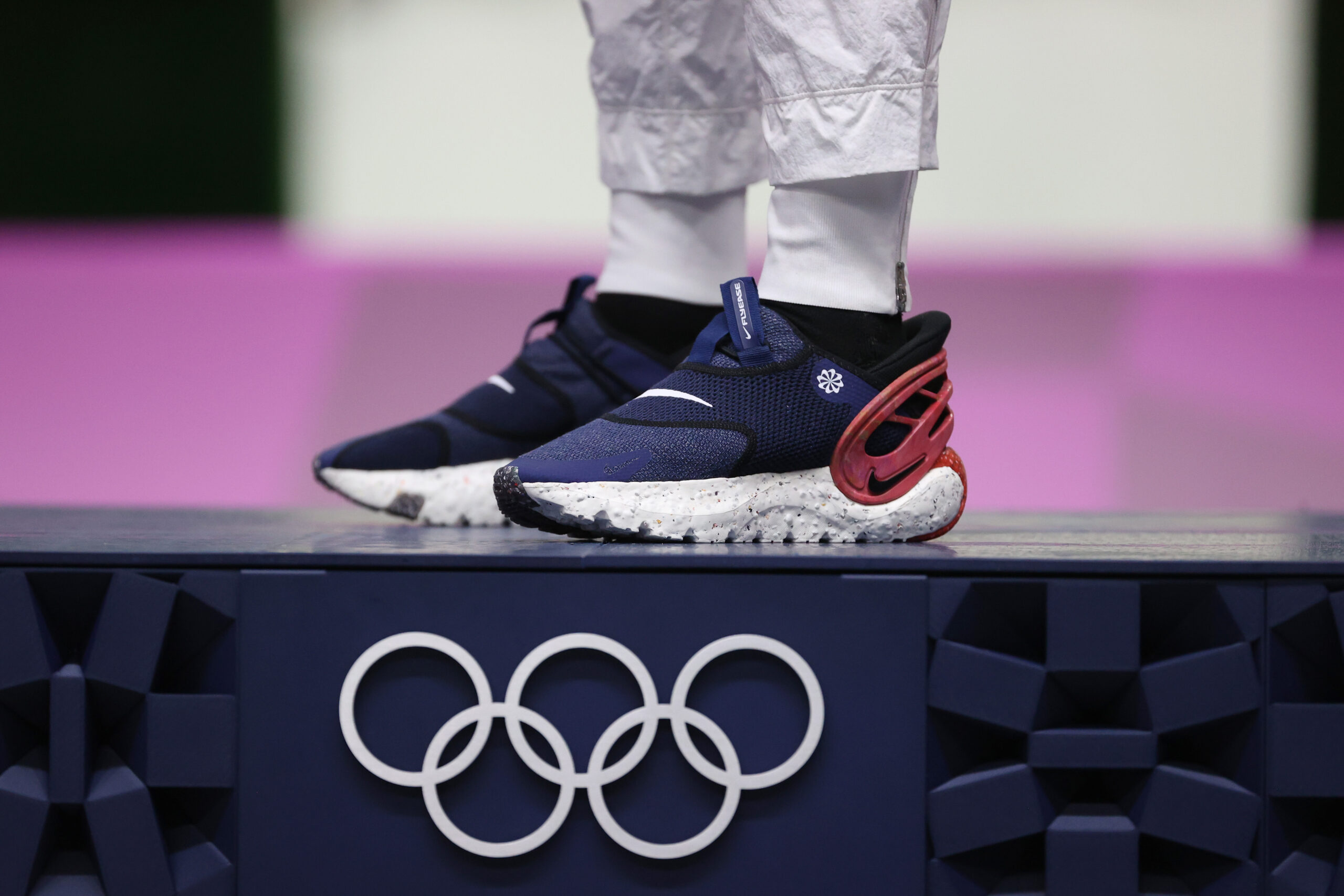 Gold Medalist William Shaner of Team USA stands during the medal ceremony for the 10m Air Rifle Men's event in Nike sneakers at the Tokyo Olympics on July 25. Both before and after the games, survey respondents named Nike as the brand they associate most with the Olympics. (Kevin C. Cox/Getty Images)
By Alyssa Meyers

The 2020 Tokyo Olympics pulled lackluster viewership statistics, raising questions for brands about the value of sponsoring teams and advertising during the games. New polling conducted after the Summer Olympics suggests that for most of Team USA’s partners this year, their efforts did little to boost their recognition as symbolic brands for the games.

Before the Tokyo Games kicked off, Morning Consult gave 2,200 U.S. adults a blank space to write in the brands that come to mind when they think of the Olympics. A different group of 2,200 respondents were asked to do the same following Sunday’s closing ceremony, and not much changed (download Excel file). 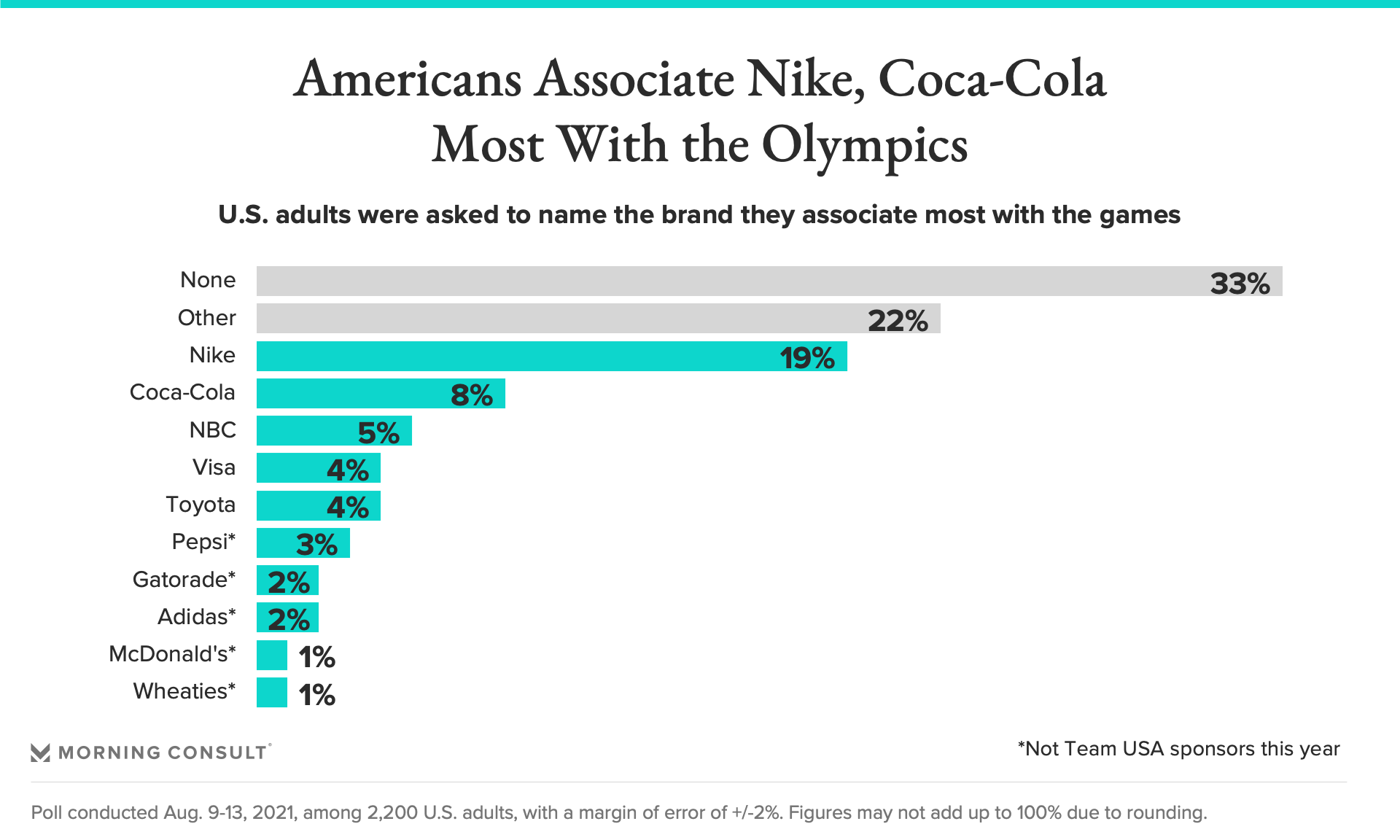 Nike Inc., which has been ​​a partner of the U.S. Olympic Committee since 2005, was the brand mentioned most often in both instances: 19 percent named the apparel company in the survey after the games, while 23 percent named it before the event.

Coca-Cola Co., the Olympics’ longest-standing partner, had the second-highest share of responses (8 percent) for an individual brand, with less than half the share of responses as Nike after the event, a decline of 2 percentage points from the pre-Olympics survey.

NBC, Visa Inc. and Toyota Motor Corp. rounded out the top five brands associated with the Olympics after the event, with little to no change in the shares of consumers who mentioned each in the surveys before and after the games. Toyota and Visa were both worldwide sponsors of Team USA and the Tokyo Olympics this year, and NBC, which broadcasts the games, was a Team USA sponsor.

However, before and after the event, the largest share of consumers — 1 in 3 in August, and 36 percent in July — failed to come up with any brand to list.

Jason Cieslak, president of the Pacific Rim for Omnicom Group Inc. strategic branding agency Siegel+Gale, said the Tokyo Olympics will be remembered “as the one where people started thinking they need to exercise caution when it comes to sponsorships,” due largely to its low ratings. NBC said the games drew an average of 15.6 million prime-time viewers over its 17 days, the lowest figure since NBC began broadcasting the Olympics in 1988.

“Most people are going to find that this was not a good year to be an Olympic sponsor,” Cieslak said.

Declining viewership, combined with the growing number of platforms and strategies that brands can leverage in their marketing surrounding the Olympics and other major sporting events, have companies questioning the value of Olympic sponsorships, said Adam Holt, senior vice president of sales at FanAI, a marketing platform that measures the impact and return on investment of sports and entertainment sponsorships.

The Morning Consult surveys suggest that’s likely wise, given the fact that only a select few brands seem to have left a mark on consumers over the course of many years of sponsorships.

Instead of sponsoring the games or entire teams, Holt said brands should consider partnering with individual athletes. While those opportunities might be limited during the event, online conversations about the Olympics — and, to an even greater extent, their participants — occur long before and after the broadcast.

“Athletes are media entities and brands themselves,” Holt said. “The Olympics only last for two weeks, but these athletes have voices and platforms year-round.”

Newer brands are gravitating away from the Olympics, and with good reason, Cieslak said. Take first-time sponsor Airbnb Inc., for instance, which got “completely whipsawed” this year, he said, due to travel restrictions: Less than 1 percent of U.S. adults thought of the home-sharing platform in conjunction with the international sporting event, despite its position as a worldwide Olympic partner thanks to a nine-year deal it signed with the International Olympic Committee in 2019.

Cieslak said up-and-coming brands, including some of the world’s most highly regarded young companies, might not just be uninterested in the Olympics. They could be put off by them.

The IOC and the Games are generally “tainted” for some younger viewers especially, he said, given factors such as Japanese citizens’ opposition to the event amid the ongoing pandemic and the backlash over the suspension of Sha’Carri Richardson for a positive marijuana test.

“The Olympics have lost their luster as this great, global, unifying force,” Cieslak said. “A lot of younger, less mature brands have grown up in this era where they don’t see it as having the same value. If the Olympics are going to get relevant again, there’s going to have to be a real shake-up in how the IOC sees them.”

Holt, however, cautioned that marketers shouldn’t write the Olympics off just yet. While NBC has reportedly had to renegotiate with sponsors who expected a larger audience, it remains too early to evaluate the long-term impacts of this year’s unusual event.

“There’s still something about the Olympic spectacle, a long-term gravitas that comes with it,” Holt said. “But the Olympics are going to have to work very hard to see things come back on the upward curve.”