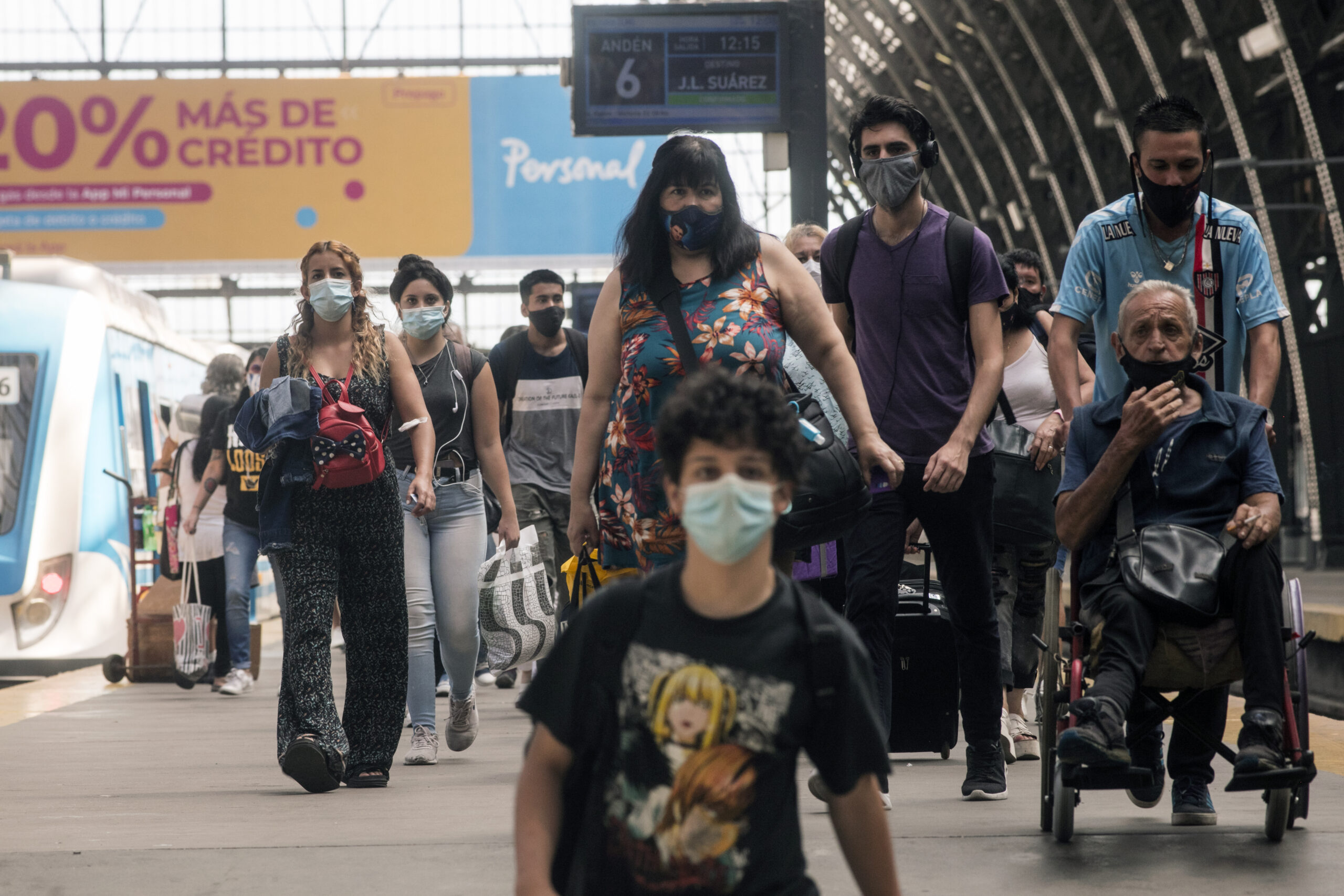 Passengers alight at the platform of the Retiro railway station on April 7, 2021, in Buenos Aires, Argentina. Morning Consult polling shows that 54 percent of Argentinian adults think the coronavirus spilled from a Chinese virology lab, while 27 percent said the virus moved naturally from animals to humans. (Ricardo Ceppi/Getty Images)
By Gaby Galvin

Nearly two years after the coronavirus began circulating in Wuhan, China, investigators still don’t know how the pandemic started. But new Morning Consult polling offers a window into how people in parts of North and South America and Asia think the pandemic began, and which officials they trust to unearth the facts.

Last week, the World Health Organization warned that discovering the truth about the COVID-19 pandemic’s origins will be an “immensely difficult scientific task that takes time,” and a forthcoming review from U.S. intelligence agencies will reportedly come up inconclusive. But the global public’s perception of what is and isn’t true matters, too.

Those beliefs shape domestic political discussions. They influence how countries spend their time and money. And they could help determine how the world prepares for future health crises.

The polling indicates that in Argentina, Brazil, Colombia and Japan, about half of adults think the coronavirus began spreading after an accident in a Chinese lab — an idea that was once considered a fringe conspiracy theory but is now getting a closer look.

In Mexico, the public is more likely to back the hypothesis that the virus transferred naturally from animals to humans, which remains the leading theory among virologists. Japanese adults are most skeptical of the natural spillover theory, with just 16 percent saying it’s the most likely cause of the pandemic.

Adults in Canada and Singapore, meanwhile, are roughly split between the two theories. And in the United States, 47 percent of adults believe the lab leak hypothesis, while 26 percent back the natural spillover theory and another 27 percent say they don’t know or have no opinion.

“What is fascinating is that the public opinion is at odds with the vast majority of scientists,” said Lawrence Gostin, a professor at Georgetown University Law Center and director of its World Health Organization Collaborating Center on National and Global Health Law. “The lab theory has gained public credence because it has been highly salient in the media.”

In the United States, the public’s perception of the virus’ origins remains highly polarized, with Republicans much more confident about the lab leak theory (70 percent) than Democrats (32 percent), who were more likely to back the natural spillover hypothesis, at 38 percent. Those shares haven’t moved since June.

Last week, the WHO announced the next phase of its investigation into the pandemic’s origins, saying its review so far has turned up “insufficient scientific evidence to rule any of the hypotheses out” and calling on countries to “depoliticize the situation and cooperate to accelerate the origins studies.”

The survey indicates the global public largely trusts the agency to uncover the pandemic’s origins. In seven of the surveyed countries, between 55 percent and 72 percent of adults said they trust the WHO “some” or “a lot” to be honest and transparent about its investigation.

“Seeing high levels of trust in WHO is encouraging given all the political setbacks it has had throughout the pandemic,” Gostin said.

The share of adults who said they trust the following groups “a lot” or “some” to be transparent about the COVID-19 pandemic’s origins:

Across surveyed countries, adults were generally in favor of the U.S. investigation into the pandemic’s origins, with support ranging from 58 percent in Singapore to 82 percent in Colombia.

The new polls, conducted Aug. 2-16, align with previous polling in six European countries and Australia that found the lab leak idea was generally more popular than the natural spillover theory, and that the public is most likely to trust the WHO, followed by U.S. intelligence agencies, to provide information about the pandemic’s origins.

The findings also underscore the global public’s skepticism of the Chinese government, which pushed back against the WHO’s calls for a fresh probe into the pandemic’s origins last week, saying the original joint investigation — which concluded the lab leak theory was unlikely — was sufficient.

Related: In Much of the West, Public Places Most Trust in WHO for COVID-19 Origin Information

China “hid details about the pandemic early on” and “doesn’t have a good track record of transparency and accountability,” Gostin said, fueling the public’s suspicion that the country is “engaging in a cover-up.”

Even so, he stressed that lab leaks are “rare.”

“The public have good instincts,” Gostin said of the findings. “But we need to do a better job of educating the public about the naturally occuring causes of novel outbreaks including the coronavirus.”

The polls were conducted among 2,200 adults in the United States and 1,000 adults each in the other countries surveyed, with margins of error of 2 and 3 percentage points, respectively.