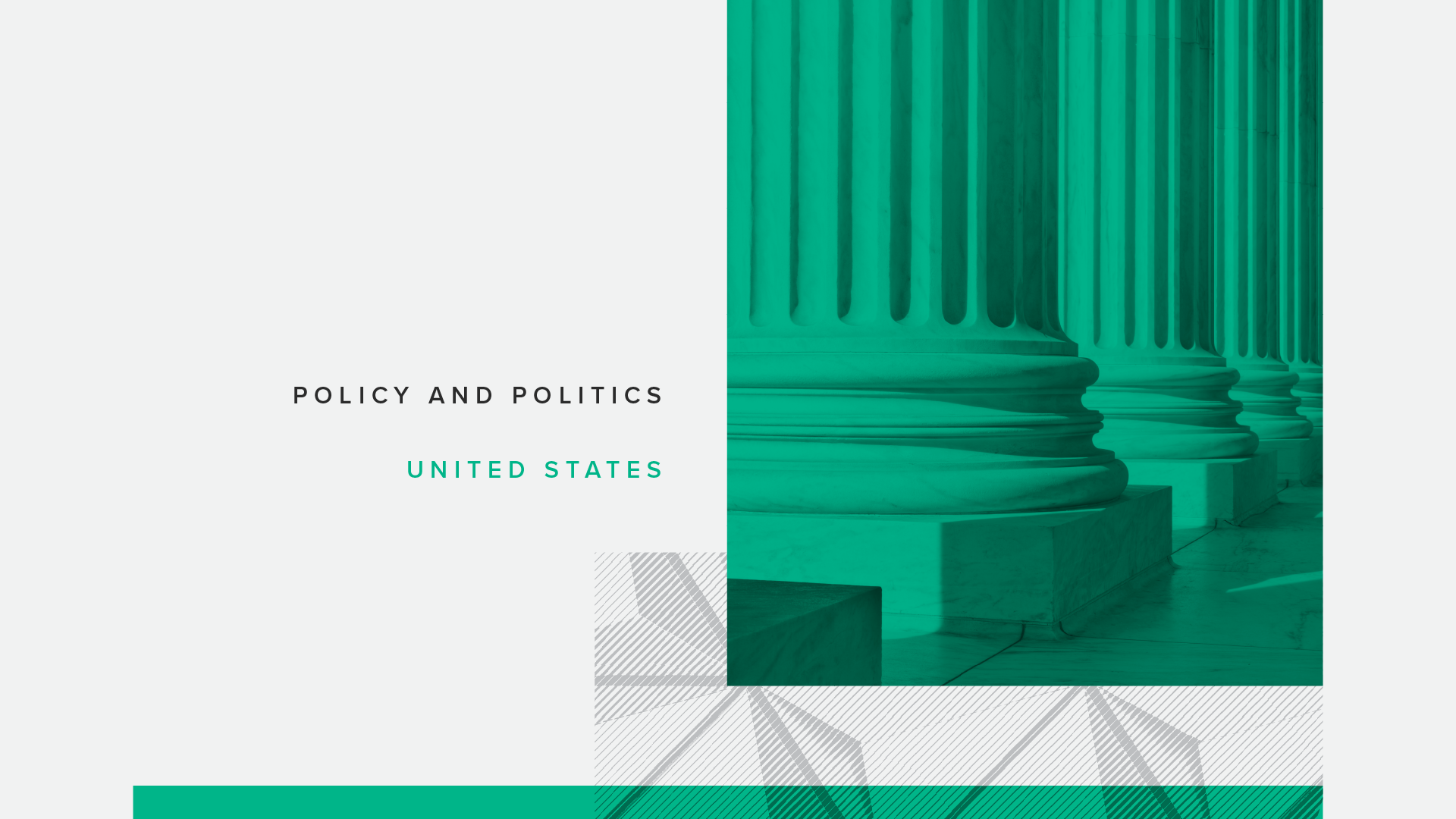 On July 15, the Internal Revenue Service released the first in a series of monthly payments authorized by the expanded child tax credit program as part of the American Rescue Plan. The payments are intended to reduce child poverty and make childcare more affordable for lower- and moderate-income parents, who have disproportionately faced financial hardship during the pandemic.

This note assesses the impact of the expanded child tax credit program by analyzing Morning Consult’s proprietary personal finances and household spending data. The August installment of Morning Consult’s monthly personal finances and household spending survey was fielded Aug. 3-7, 2021, and included supplementary questions about the child tax credit payments. These findings were compared against historical personal finance data to identify the impact of the first installment of the payments on the ability of U.S. families to pay their bills.

Most eligible parents received payments, but many left waiting 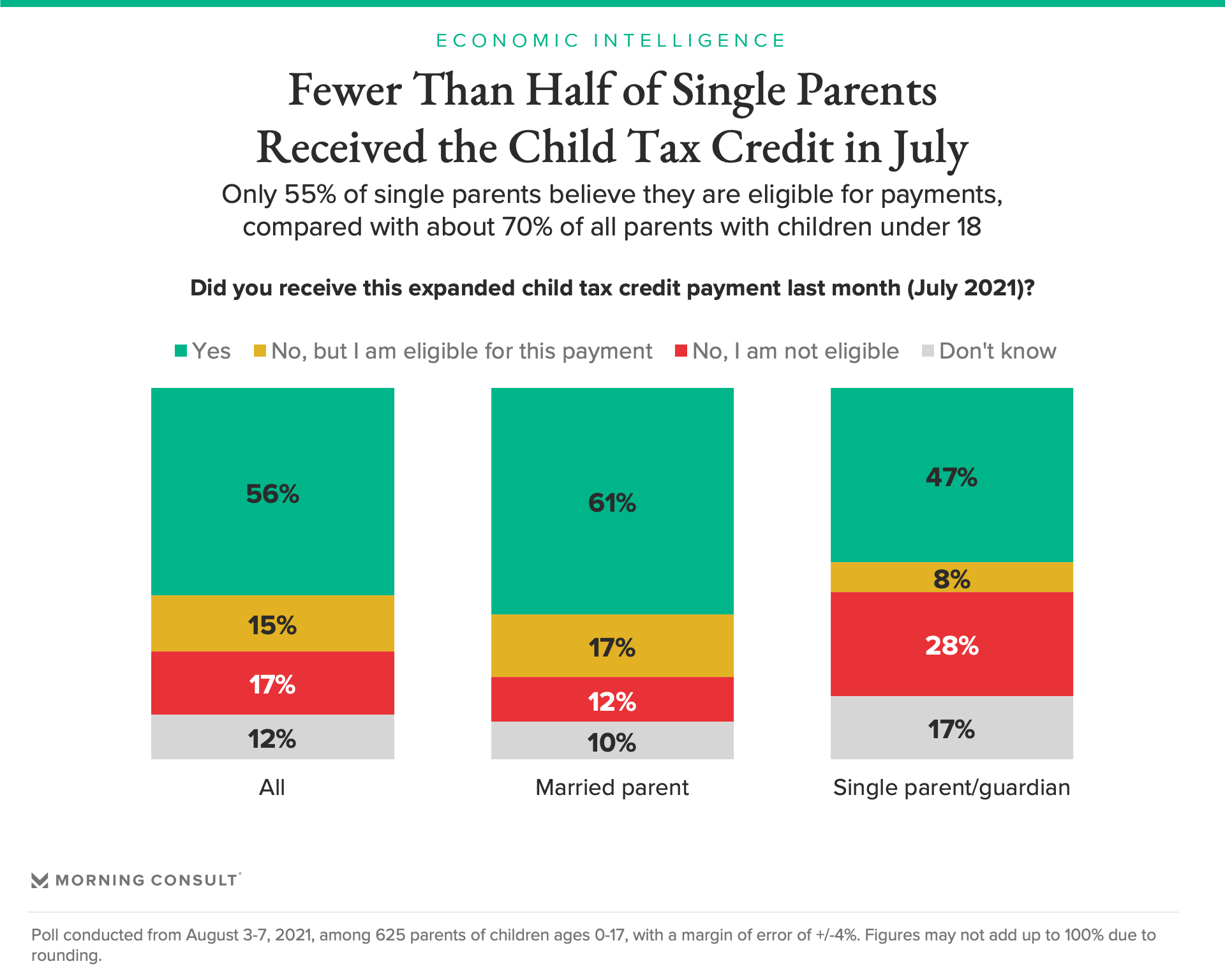 Child tax credit payments reached 56 percent of all parents with children under age 18 in July. Among surveyed parents claiming eligibility for the payments, 79 percent1 reported receiving a payment. But the speedy rollout left many parents waiting: about 1 in 5 respondents believed they qualify for the credit but had not received payment.

Furthermore, only 47 percent of single parents of children under 18 reported getting payments last month, compared with 61 percent of married couples. While most single parents would qualify for the credit based on income, 28 percent claim they are not eligible for the payments–more than twice the share of married parents. In cases of shared custody only one parent is allowed to claim the credit, even if the cost of child care is borne by both parties. As a result, many single parents will not directly benefit from the enhanced credits. 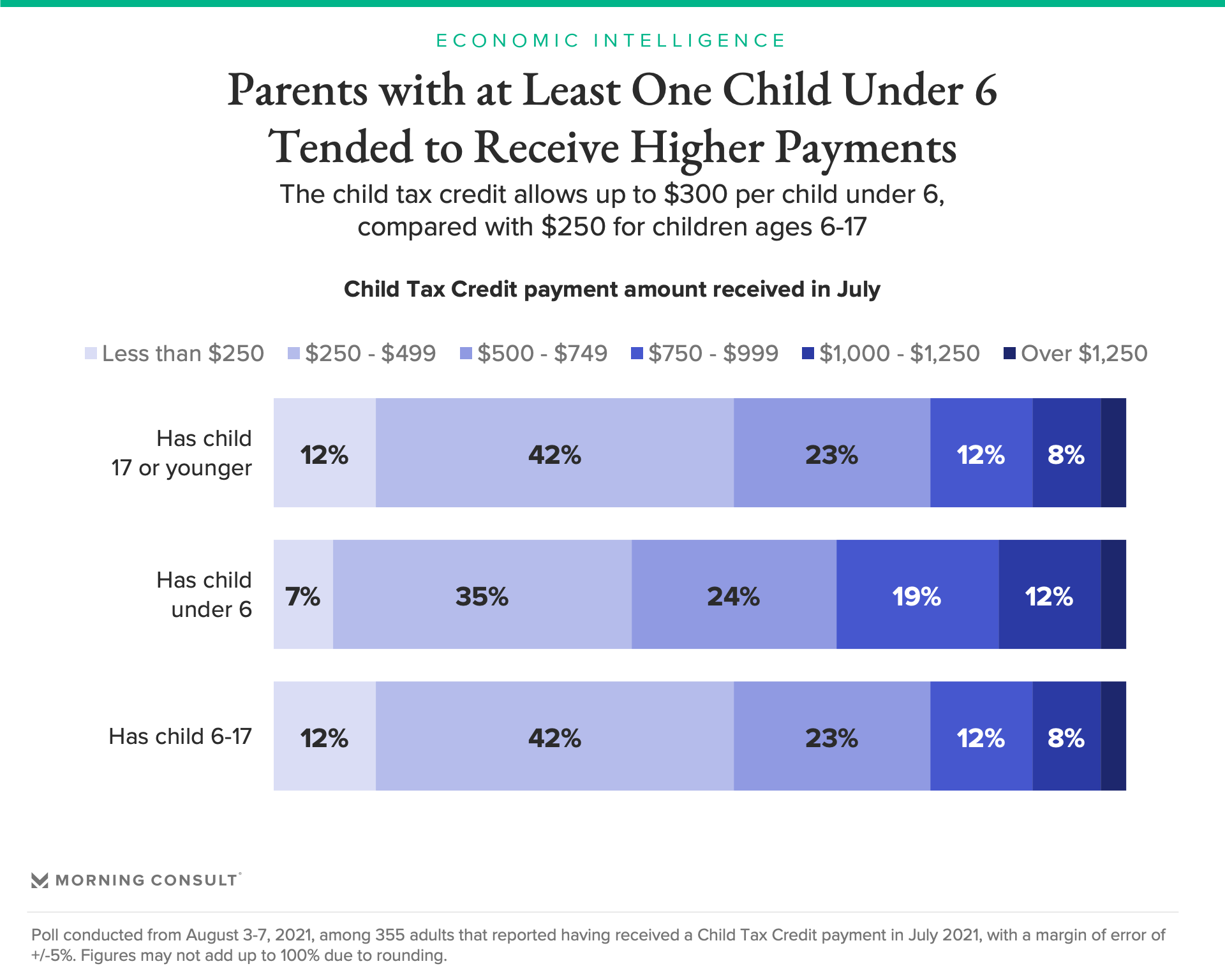 Higher income households–many of which are headed by married couples, in many cases earning dual incomes–were also more likely to receive larger payments. Morning Consult’s estimated weighted average payment value for those earning more than $100,000 was $604, compared with $523 for families earning less than $50,000 and $543 for the middle-income bracket.2 Joint-filers tended to receive higher payouts than single parents, with married parents reporting amounts averaging an estimated $568 compared with $436 for single parents.

Higher-income families tend to have more children and thus qualify for more payments under the law. However, the disparity draws into question whether the credit–aimed at helping lower- and moderate-income families–is maximizing its intended impact. 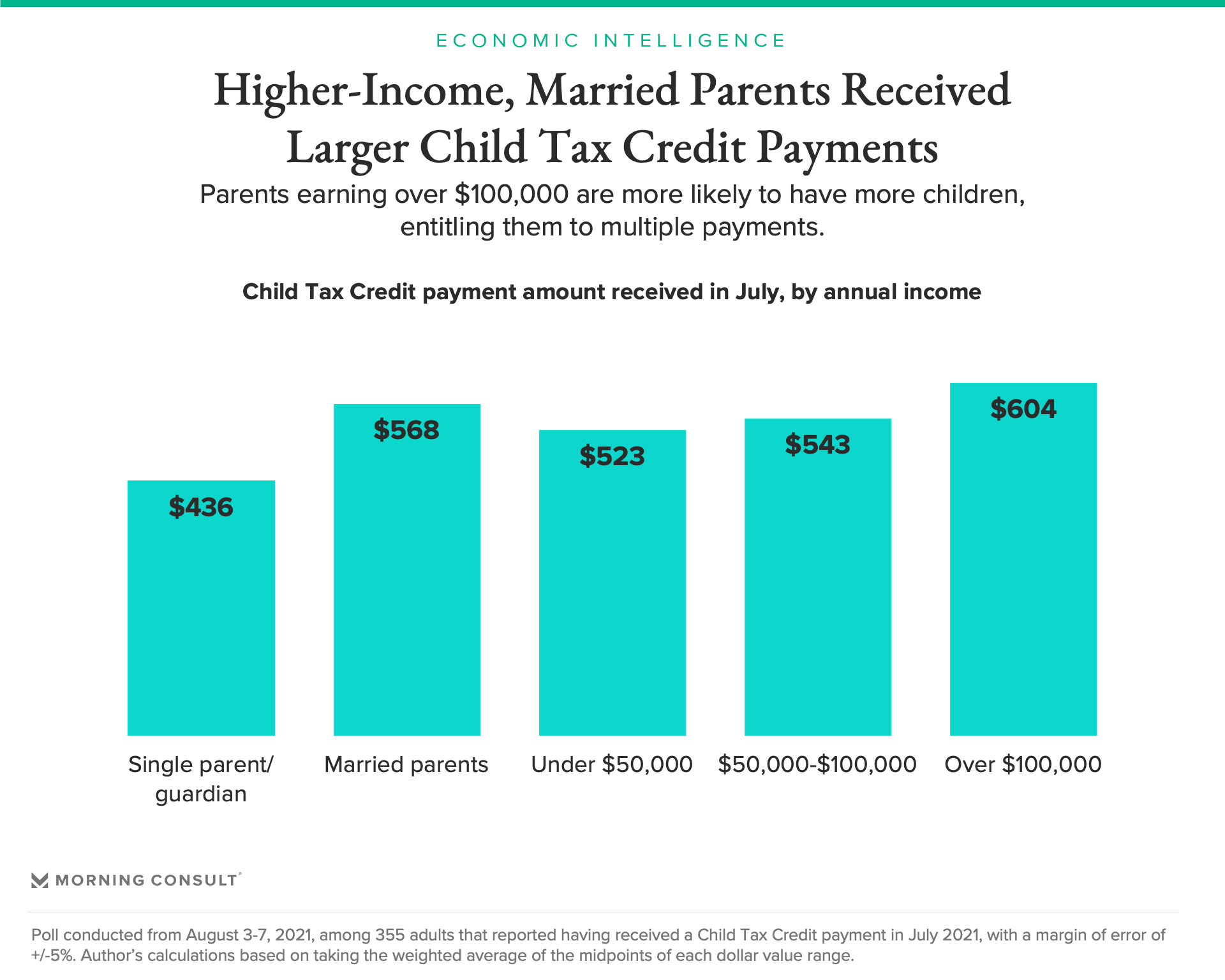 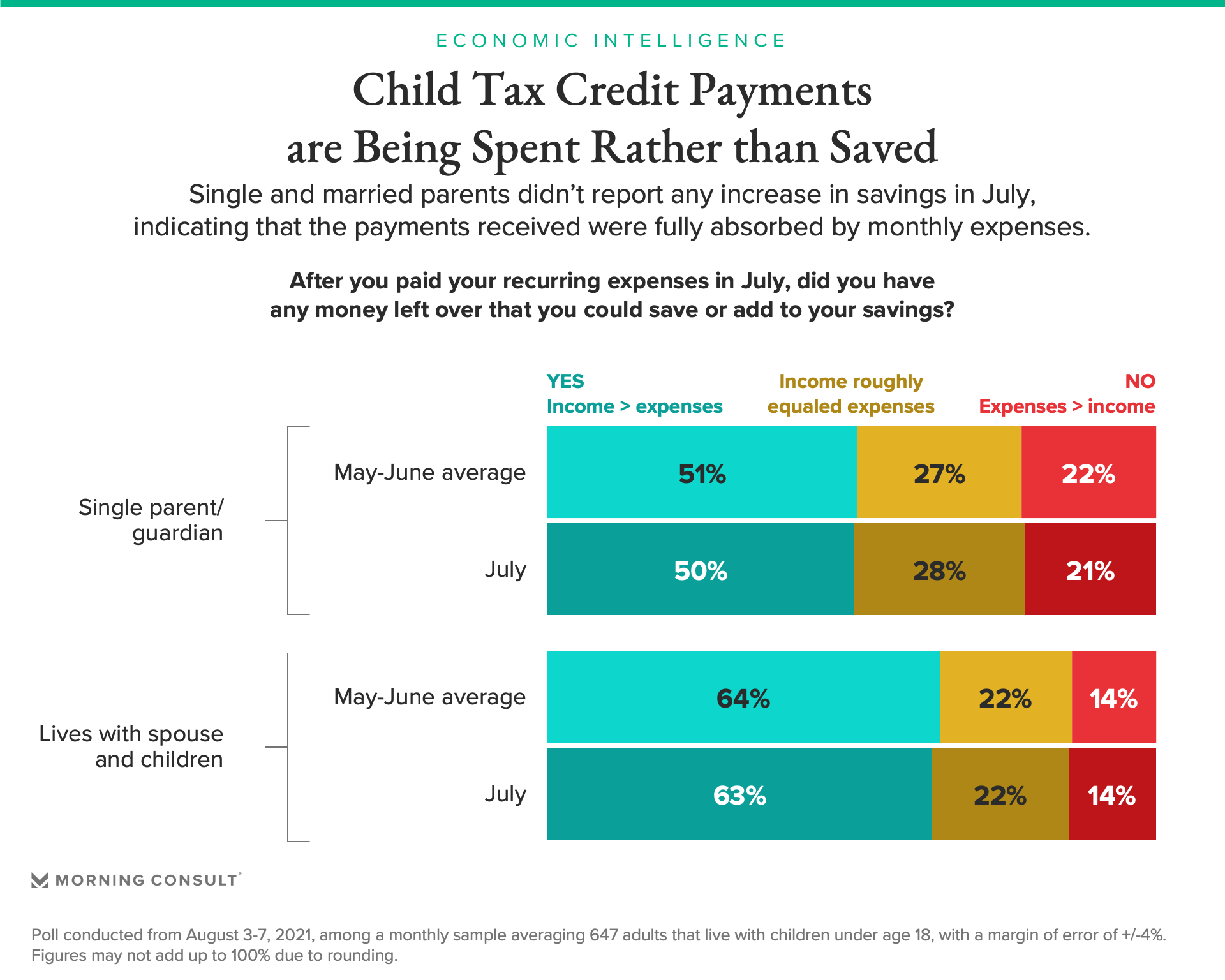 The tax credits arrived at a time of rising expenses for families. Unlike the stimulus checks distributed earlier this year, a large portion of which ended up in the savings accounts of higher-income adults, the first installment of child tax credit payments has mostly been spent. Parents living with children under 18 showed no increase in leftover income after paying household expenses in July compared with the average over the previous two months, despite the extra influx from the tax credit. 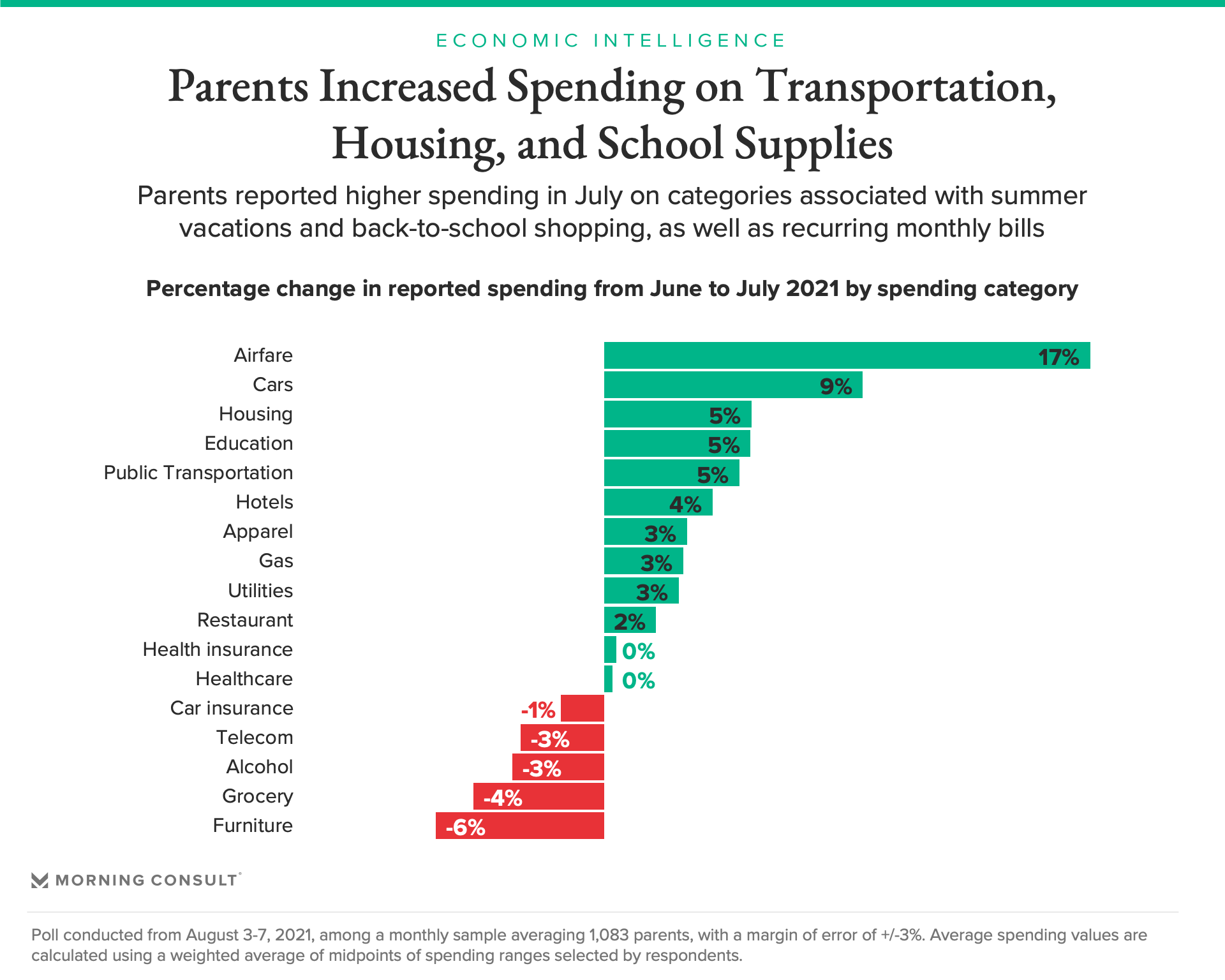 These survey results indicate that families spent the extra income from child tax credit payments rather than stashing it away, suggesting that the credit is fulfilling at least some of its objective: helping parents cover household expenses. However, in terms of reaching the families most in need of assistance, the effectiveness of the credit is murkier since the per-child provision resulted in households at the higher end of the eligible income range tending to receive larger sums than those at the lower end.

Looking ahead to September and the expiration of expanded unemployment benefits, the child tax credit may help compensate for an associated demand drop as it enables many households to pay bills with government-sponsored dollars. The observable impact of the payments may evolve as monthly installments accumulate and spending patterns shift heading into the school year.

1 Excludes respondents that selected “No, I am not eligible” or “Don’t know”

2 The average payment amount was estimated by taking the weighted average of the midpoints of each response level provided in the survey describing the amount received. For the highest bucket, which did not include an upper bound, the average value was assumed to be $1,500 for calculation purposes.