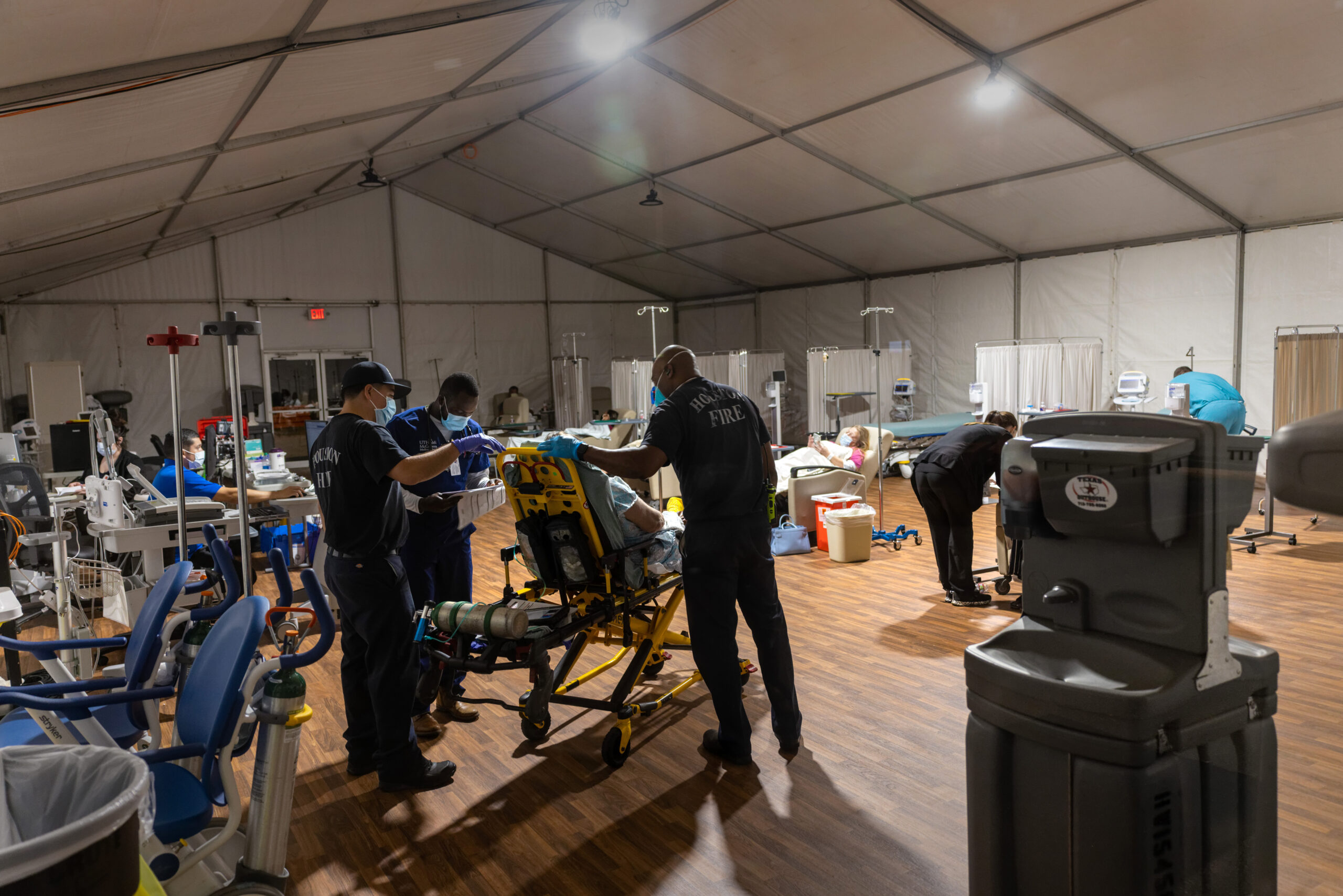 Houston Fire Department medics deliver a woman with possible COVID-19 symptoms to an overflow area at Memorial Herman Northeast Hospital on Aug. 19, 2021, in Houston, which is seeing a major surge fueled by the delta variant. A Morning Consult poll found that 82 percent of U.S. adults say they’re “very” or “somewhat” concerned about the delta variant. (John Moore/Getty Images)
By Gaby Galvin

The delta variant is ripping through the country, driving COVID-19 hospitalizations above 100,000 and near their early January peak. And most Americans are growing increasingly worried, new Morning Consult data shows.

As COVID-19 cases, hospitalizations and deaths continue to rise, particularly among the unvaccinated, the polling indicates 82 percent of U.S. adults now say they’re “very” or “somewhat” concerned about the variant, up from 73 percent in late July.

Concern Over Delta Variant Ticking Up

Share of U.S. adults who said they were “very” or “somewhat” concerned about the delta variant of the coronavirus

The high level of concern likely reflects the public attention on the delta variant as a “game-changer,” said Dr. L.J Tan, chief strategy officer of the Immunization Action Coalition, which creates programming around vaccines.

Even so, he cautioned that “the gap between the two is worrisome” because “this concern doesn’t mean much unless it translates to vaccinations.”

That may be the case in some communities, given data compiled by The New York Times shows the recent uptick in vaccinations has been concentrated in some states with lower immunization rates. In Louisiana, for example, the vaccinated population climbed from 36 percent to 48 percent between June 6 and Aug. 21, while it rose from 50 percent to 62 percent in Florida.

Tan said fear tied to the delta variant could prompt “people who are sitting on the fence, who have not bought into the mythology of the anti-vaccine myths” to seek a COVID-19 shot.

The public’s concern over the delta variant isn’t the only factor affecting vaccination rates, though, with officials pointing to the variant-driven surge in infections to justify implementing vaccination mandates and offering COVID-19 booster shots.

The findings also come nearly two months after President Joe Biden claimed the country had achieved “independence from a deadly virus,” weeks before hitting his administration’s goal of having 70 percent of U.S. adults at least partially vaccinated. In many parts of the country, that’s still not the case.

“We need to focus on healthy unvaccinated adults,” Tan said, “and leverage that concern into seeking information about the safety and effectiveness of the vaccine, and then going and getting vaccinated.”

Related: More Than 3 in 4 Vaccinated Adults Say They Would Get a COVID-19 Booster if It’s Recommended
Coronavirus Coronavirus Variants Return to Normal Vaccines