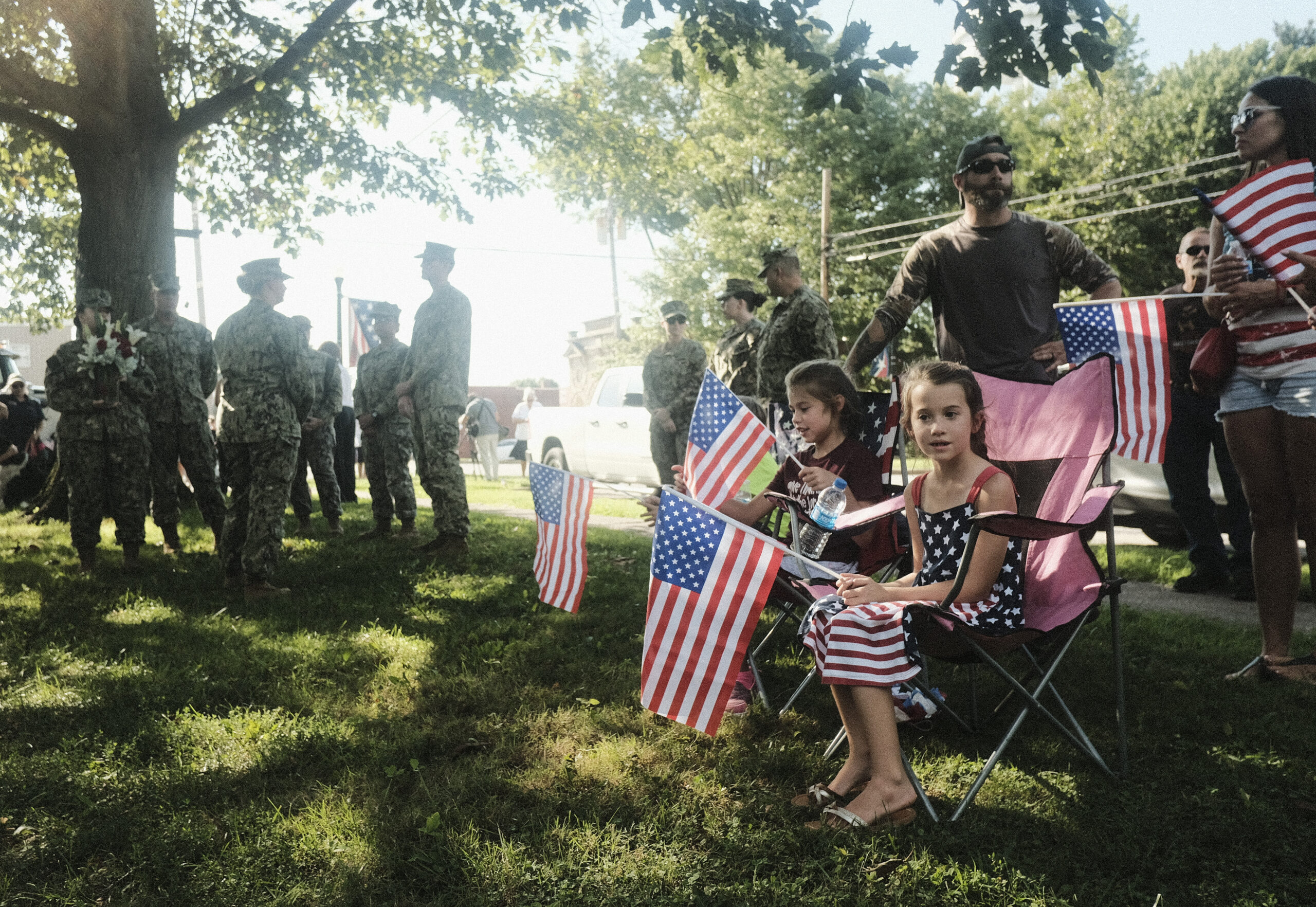 Ohioans gather in front of Edison Middle School for an Aug. 29 prayer service honoring fallen U.S. Navy Corpsman Max Soviak, one of 13 servicemembers killed during the Aug. 26 terrorist bombings outside Kabul's airport in Afghanistan. New polling shows voters are as concerned about security issues as they have been in five years. (Matthew Hatcher/Getty Images)
By Eli Yokley

The terrorist attack at Kabul’s airport last week amid U.S. evacuation efforts propelled security issues to their apex in Morning Consult/Politico polling, with Americans registering an increase in concern about terrorism as the military wrapped up the country’s withdrawal from Afghanistan.

The issues – second only to the economy in voters’ minds – represent tricky territory for Democrats more than a year out from the midterm elections as voters have soured on President Joe Biden’s handling of foreign relations and national security.

According to the latest polling, 26 percent of voters said security issues such as terrorism, foreign policy and border security were most important when thinking about their votes for federal office. That figure is up 6 percentage points since an Aug. 21-24 survey conducted the weekend before the bombings by the Islamic State group’s Afghanistan affiliate, and ties a weekly high in Morning Consult/Politico polling set in October 2016. 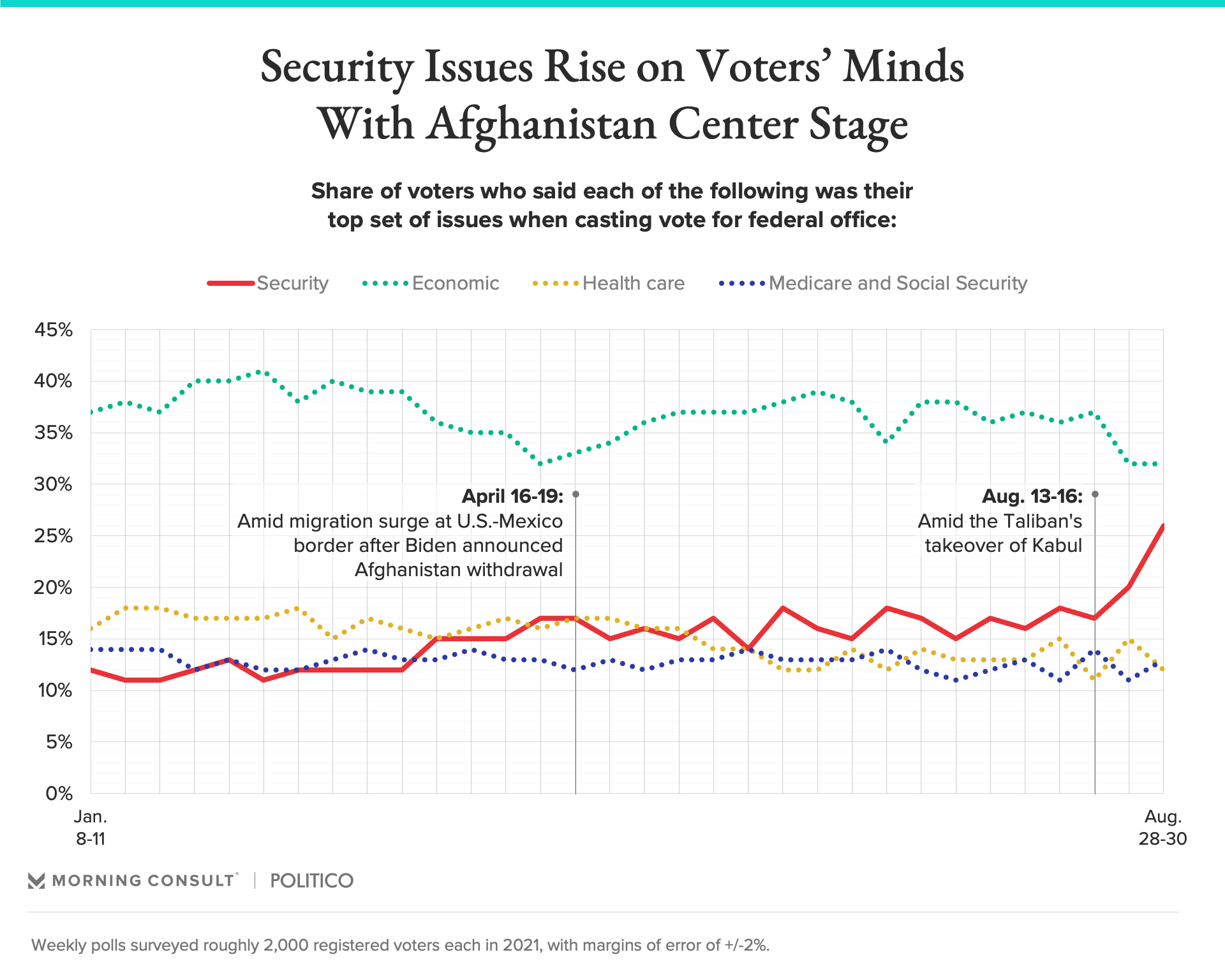 The heightened concern over security is largely driven by Republican voters, among whom prioritization of the issue increased 10 points over the week, to 46 percent — more than twice the roughly 1 in 10 Democrats and 1 in 5 independent voters who say the same.

The last time security issues ranked nearly as high among voters as they do now was in January 2020, when the United States appeared to be on the verge of conflict with Iran following an attack ordered by then-President Donald Trump that killed Iranian military officer Qassem Soleimani. Those election-year concerns quickly faded amid the COVID-19 pandemic, an indication of how quickly voters’ concerns can shift.

While it’s far too early to tell whether concerns about security will prove decisive at the ballot box next year, the numbers suggest that the chaotic U.S. exit from Afghanistan has given Republicans an opening to move the midterm conversation to a more favorable playing field in the near term.

The Aug. 28-30 survey was conducted after the Aug. 26 terrorist bombings killed 13 U.S. servicemembers and dozens of Afghans gathered outside the airport in Kabul as the United States was concluding its massive evacuation effort. Over half of voters (52 percent) said they’d seen, read or heard “a lot” about the bombings, ranking the news event among the most salient of the year and appearing to prompt heightened concerns about the threats the United States faces from terrorism. 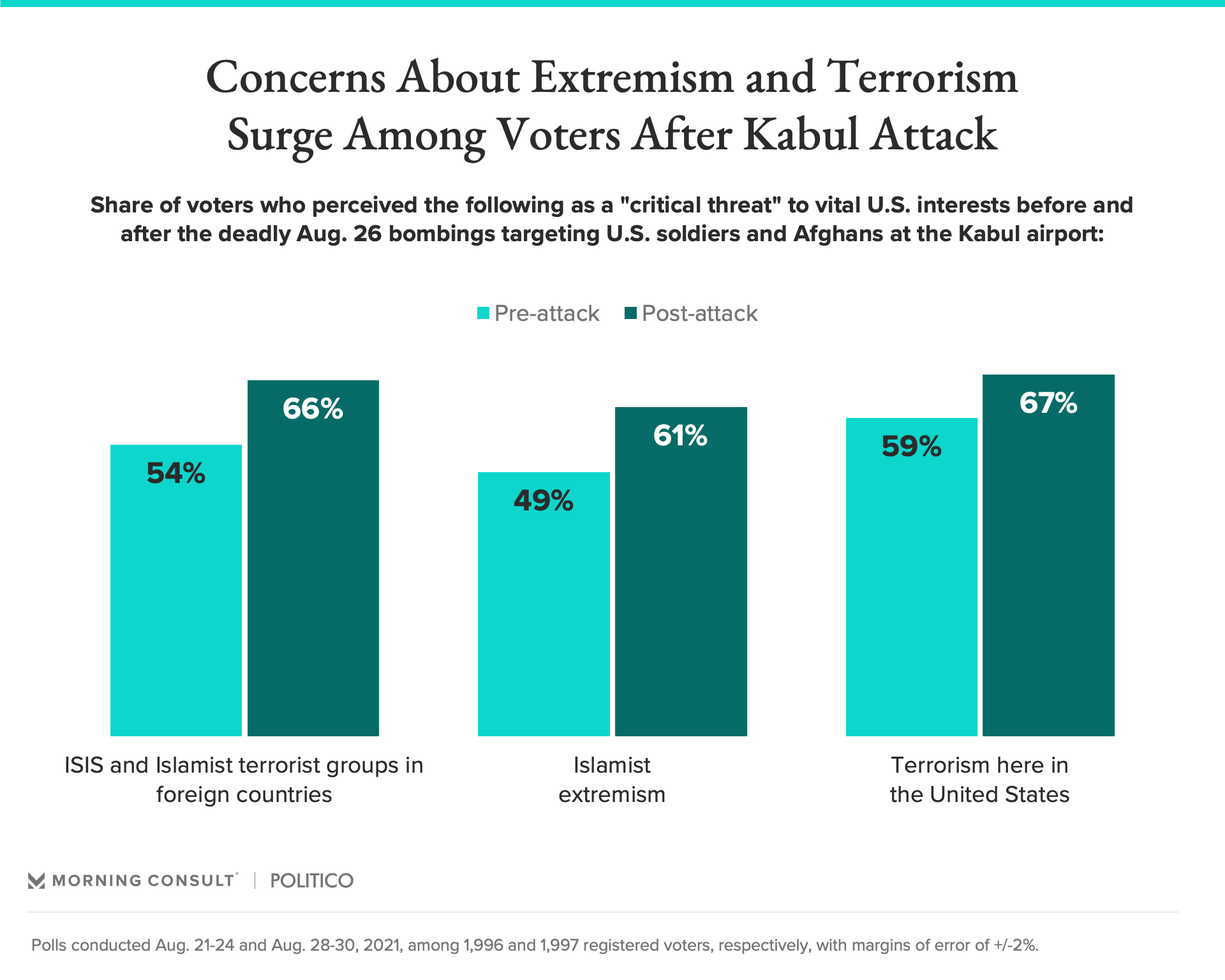 Since polling conducted Aug. 21-24, roughly a week before the attacks, the share of voters who said ISIS and other Islamist terrorist groups in foreign countries as well as Islamist extremism overall pose a “critical threat” to vital American interests over the next 10 years increased by double digits, to 66 percent and 61 percent, respectively, including similarly sized increases among both Democrats and Republicans.

Roughly two-thirds of voters (67 percent) now see terrorism in the United States as a critical threat, up 8 points over the same time period.

All of this has taken a toll on perceptions of Biden, who delivered remarks at the White House on Tuesday to lay out the case for the nature of the evacuation by Tuesday’s deadline and his reasoning for the withdrawal itself. Though half of voters backed his decision to withdraw all troops from Afghanistan, 3 in 5 disapprove of how he’s handled the issue, and, more generally, they are increasingly dissatisfied with his handling of foreign affairs and national security. 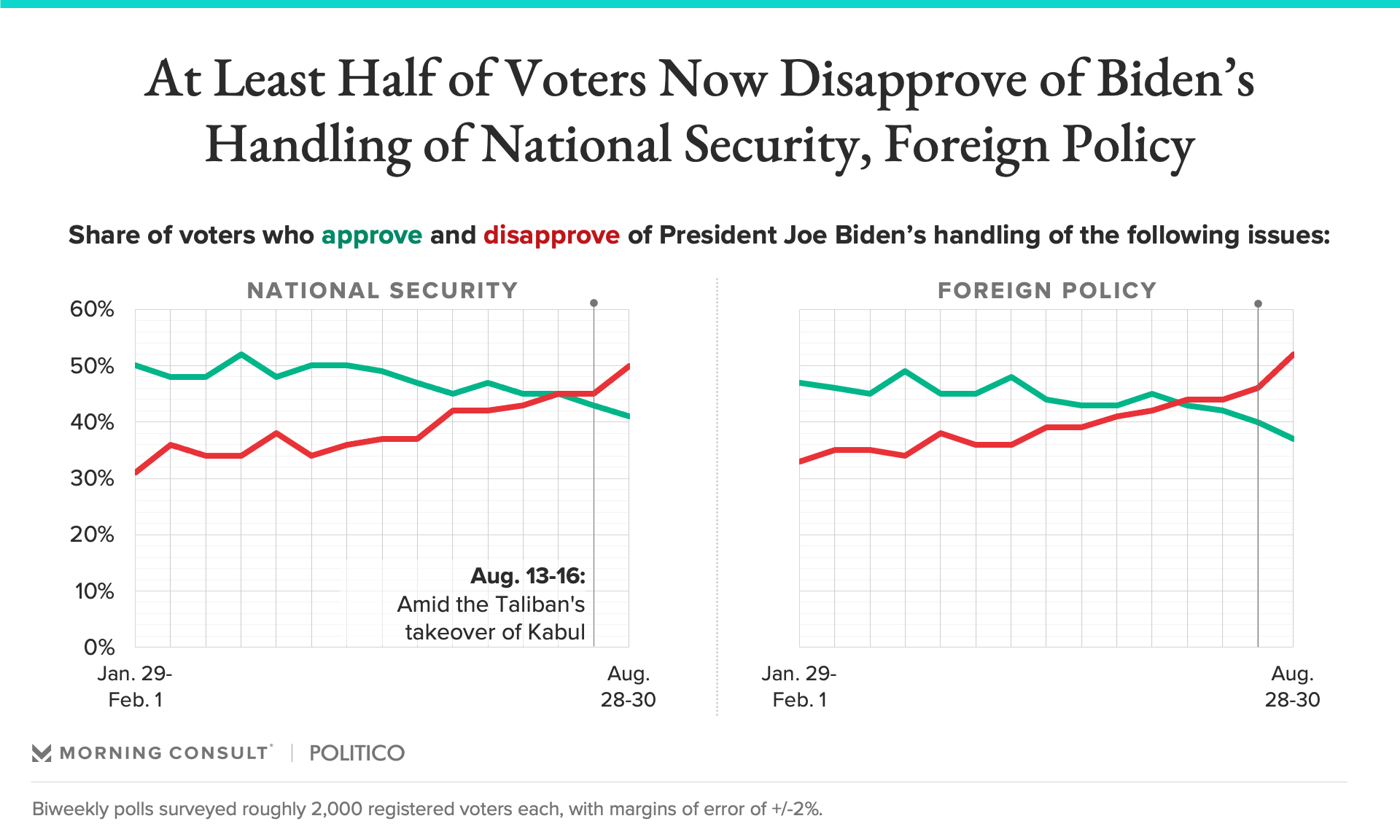 Compared with Aug. 13-16 polling conducted as the Taliban was taking control of Afghanistan, the share of voters who disapprove of how Biden has handled national security issues increased 5 points, to 50 percent. Meanwhile, his disapproval rating on foreign policy increased 6 points, to 52 percent, over those two weeks.

Among independent voters, a group that’s been souring on Biden throughout the summer, 53 percent now disapprove of his handling of both issues, roughly matching their posture on his handling of the economy and only worse than how they view his approach to immigration when it comes to the 14 issues tracked throughout the year in the biweekly surveys.