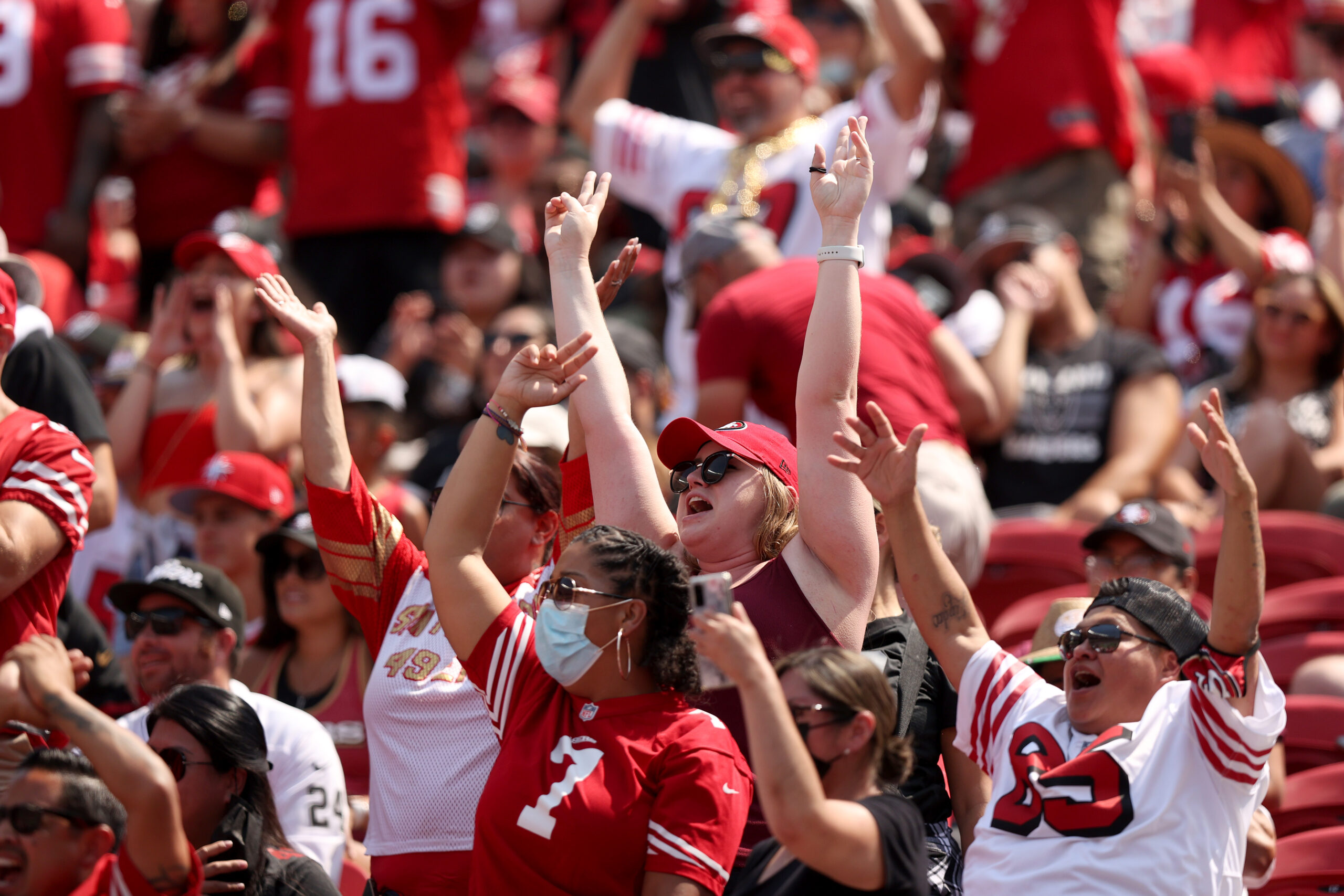 San Francisco 49ers fans cheer during the team's preseason game against the Las Vegas Raiders at Levi's Stadium on Aug. 29 in Santa Clara, Calif. In a new Morning Consult poll, more than half of typical NFL game attendees said a COVID-19 vaccine requirement for all fans would make them more interested in attending a game this season. (Ezra Shaw/Getty Images)
By Alex Silverman

Hundreds of thousands of fans will return to NFL stadiums this weekend, most for the first time since the COVID-19 pandemic forced the league to play the 2020 season in front of empty or sparsely filled seats. While only a small fraction of them will have to present proof of vaccination to get inside, new research indicates that many would prefer such a requirement be in place.

In a Morning Consult poll, 54 percent of regular NFL game attendees said they would be more interested in going to a game this season if all fans were required to present proof of vaccination against COVID-19. That’s nearly three times the share of regular attendees who said they would be less interested in going if vaccinations were required. Twenty-seven percent of regular attendees said a vaccine requirement wouldn’t have any impact on their interest in attending a game.

The Aug. 30-Sept. 2 survey included 552 regular NFL game attendees, or individuals who said they went to at least one game during a typical NFL season prior to the pandemic. The margin of error for this cohort was 4 percentage points.

The survey also found that 30 percent of those regular NFL game attendees said they don’t plan to go to any games this season, though it’s unclear whether or not their plans to stay home are related to the pandemic or concerns about unvaccinated spectators.

Sixty-five percent of regular NFL game attendees said they had received a COVID-19 vaccine, about the same share as among the general adult population, according to the survey. Despite this, the results show those who regularly go to NFL games were far more likely to prefer vaccine mandates.

The Seattle Seahawks on Tuesday joined the Las Vegas Raiders and New Orleans Saints as the only NFL teams whose fans will be required to present proof of vaccination. Several other teams are requiring fans to wear masks regardless of vaccination status.

Saints fans also have the option of presenting proof of a negative COVID-19 test from up to 72 hours before kickoff to gain entry. All three policies only apply to fans ages 12 and older.

The Raiders and Saints are two of six NFL teams who play their home games in facilities with fixed roofs, while the Seahawks play in an open-air stadium. Vaccine requirements will likely be more prevalent in the NBA and NHL once their respective seasons start, as many jurisdictions, such as New York and San Francisco, have imposed more stringent restrictions on indoor gatherings than outdoor ones.

In Morning Consult’s latest Return to Normal tracking survey, 36 percent of U.S. adults said they would be comfortable attending a sporting event given the current state of the pandemic. While that figure is down from a high of 45 percent in early July, it increased by 2 points week over week, marking the first uptick in eight weeks.

Forty-six percent of adults said they would be comfortable attending an outdoor sporting event, compared to 34 percent who said they’d be open to attending an indoor event.