How U.S. Veterans of the War in Afghanistan Feel About the Country’s Withdrawal

Rare survey of Afghanistan veterans gauges views on Biden's decision, what happens next and whether the 20-year mission was a success 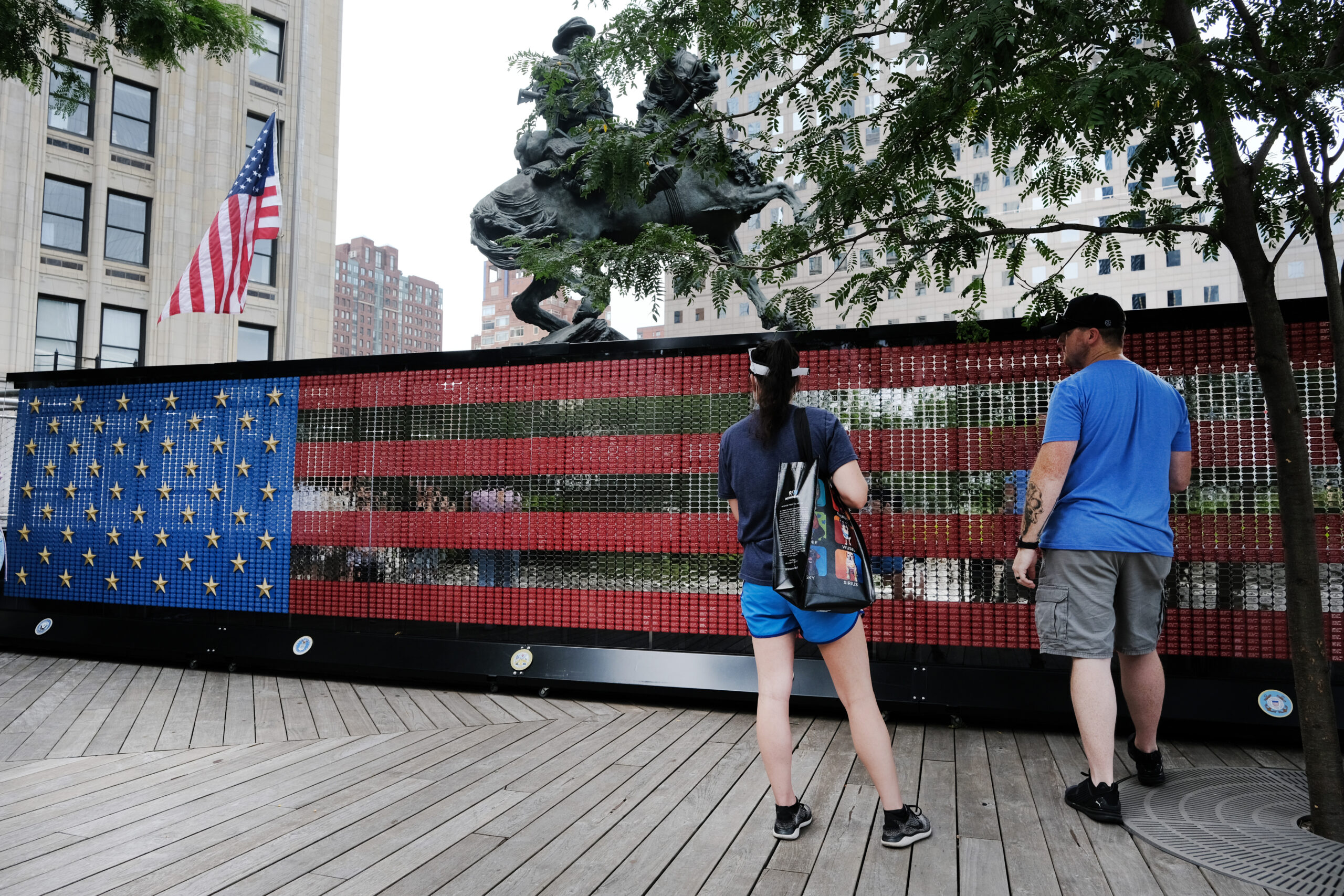 People visit a monument made of dog tags of fallen troops from the "global war on terror" at Liberty Park on the World Trade Center campus on Aug. 31 in New York City. New polling conducted amid the U.S. military's withdrawal from Afghanistan found that veterans of the 20-year war there were more likely than the broader electorate to strongly back Biden's decision to pull all troops from the country ahead of the 20th anniversary of 9/11 on Saturday. (Spencer Platt/Getty Images)
By Eli Yokley

U.S. veterans of America’s war in Afghanistan are more likely than the average voter to consider the 20-year conflict a success, according to a rare new survey of the group conducted by Morning Consult. And even as the Taliban cements its control of the country, Americans who fought the militant group and weakened the terrorists behind the Sept. 11 attacks are also more fervent than the general electorate in their support for President Joe Biden’s decision to withdraw troops from Afghanistan.

Nearly 3 in 5 veterans of the war in Afghanistan (58 percent) said they support Biden’s move to withdraw all troops before the 20th anniversary of the 2001 attacks on Saturday, including 42 percent who do so strongly. The latter figure is 15 percentage points higher than the share of all voters who said the same. 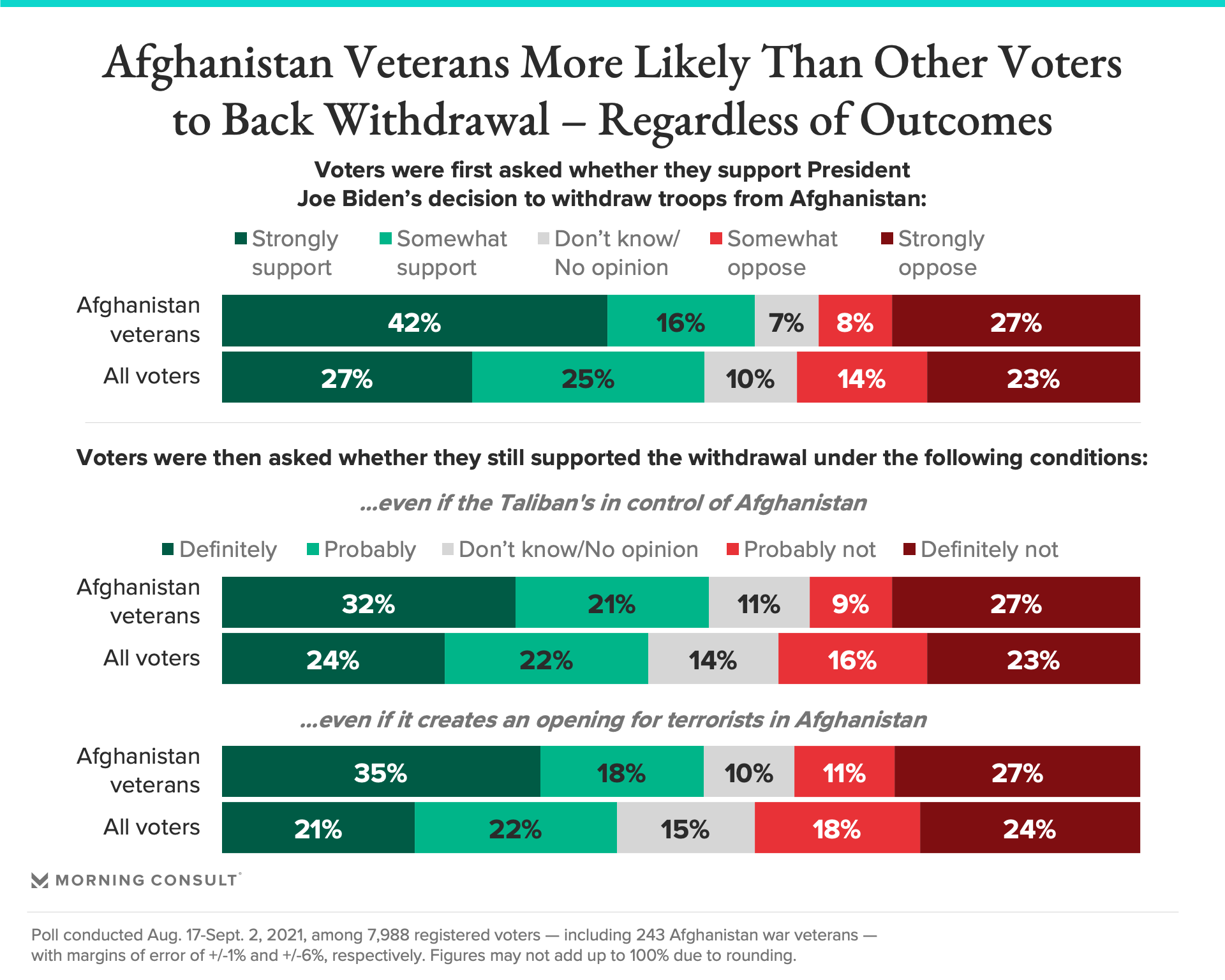 That solid support persists when presented with both confirmed and potential consequences of the U.S. exit: Over half (53 percent) said they still support the withdrawal even if it means the Taliban is in charge of the country — which has come to pass —  or if it creates an opening for Islamist terror groups such as al-Qaida to gain a foothold. Again, Afghanistan veterans were more likely than voters overall to insist that a pullout was the right call.

The survey of 243 registered voters who served in the country’s longest war was conducted Aug. 17-Sept. 2, after the Taliban took control of the Afghan capital and as the United States was carrying out a massive evacuation operation ahead of the Aug. 31 withdrawal deadline, one that removed hundreds of thousands of Americans and allies from the country but also led to the deaths of 13 U.S. servicemembers and dozens of Afghans in terrorist bombings outside the Kabul airport.

The messiness of the withdrawal and the hasty evacuation – which took place under the close watch of a group the United States had fought for nearly two decades – has led a majority of veterans of the war, like much of the country, to characterize their feelings about the events as “sad,” “upset,” “worried” and “angry.”

Yet veterans are far more likely than the broader electorate to express a sense of victory regarding America’s war effort, though they’re almost evenly split on the subject. 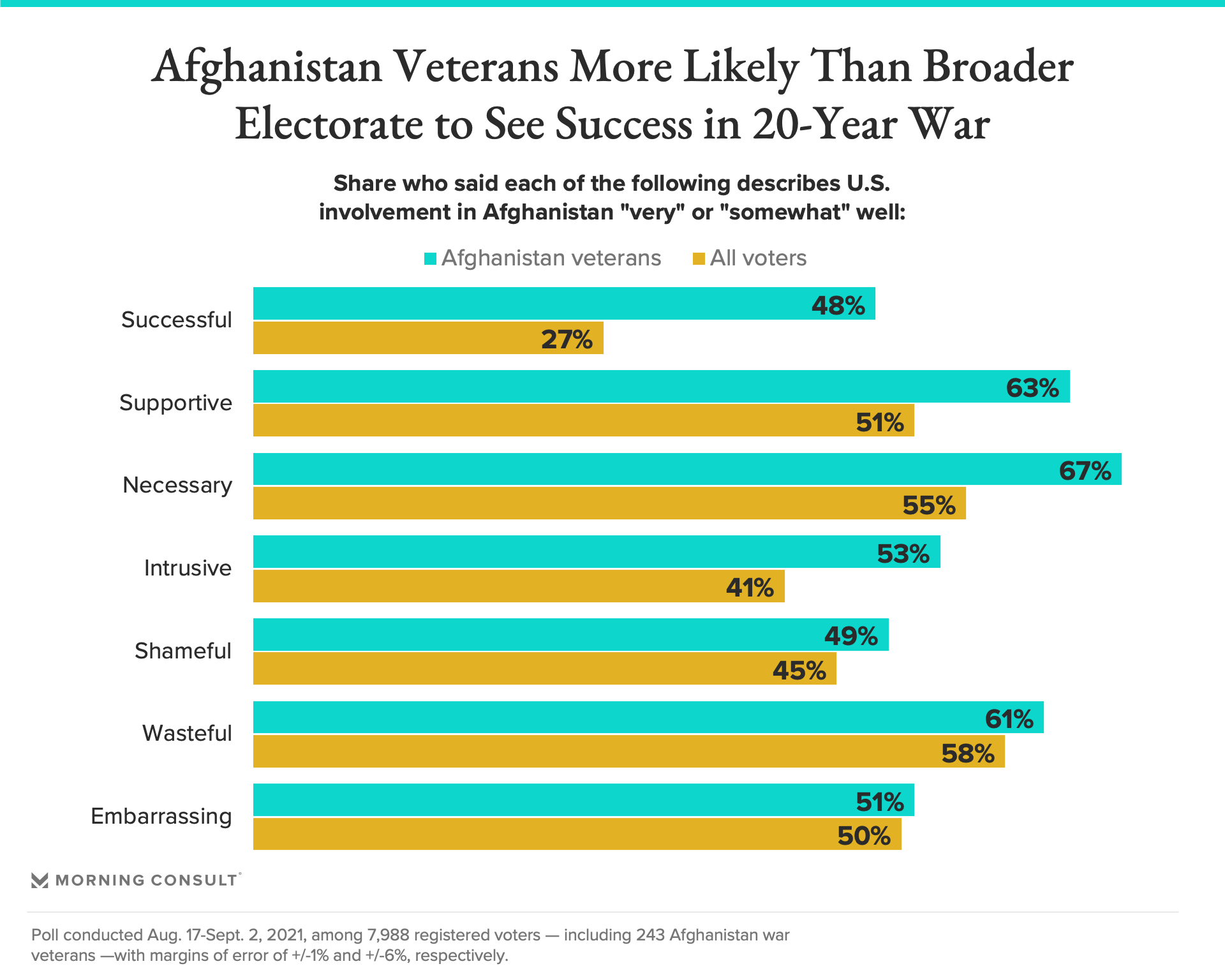 Veterans of the war were also more likely than the overall electorate to describe American involvement as “supportive” and “necessary,” though there was less deviation between the groups on questions of wastefulness or embarrassment – terms that have followed the four presidents who have overseen the war.

For now, the current president’s approach to Afghanistan – fresh on voters’ minds – is getting the worst marks from veterans. 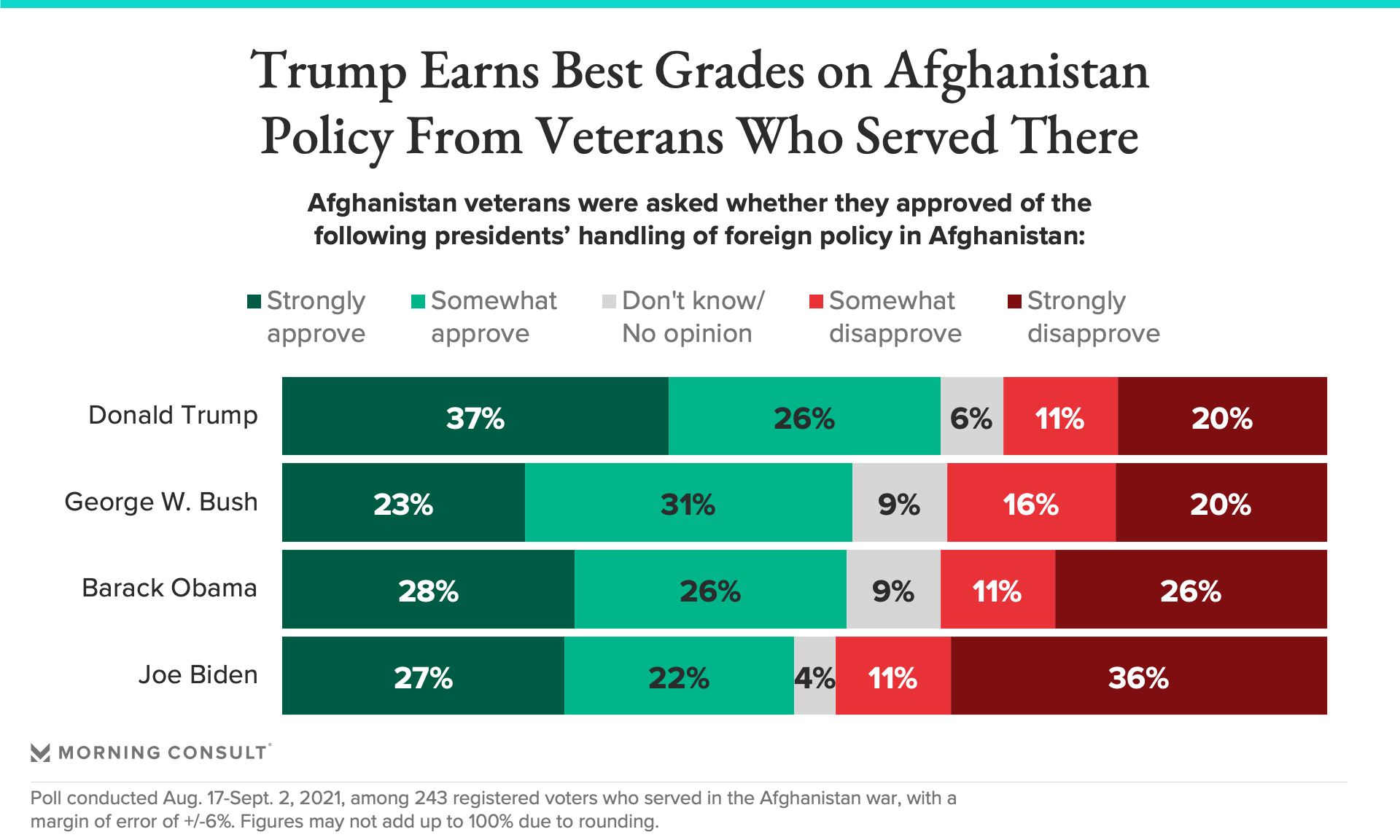 Nearly half of U.S. voters who served in Afghanistan disapproved of Biden’s handling of foreign policy there, compared with fewer than 2 in 5 who said the same of Trump, Obama or Bush.

Looking ahead, veterans join the rest of the electorate in expressing fears about what is now to come. 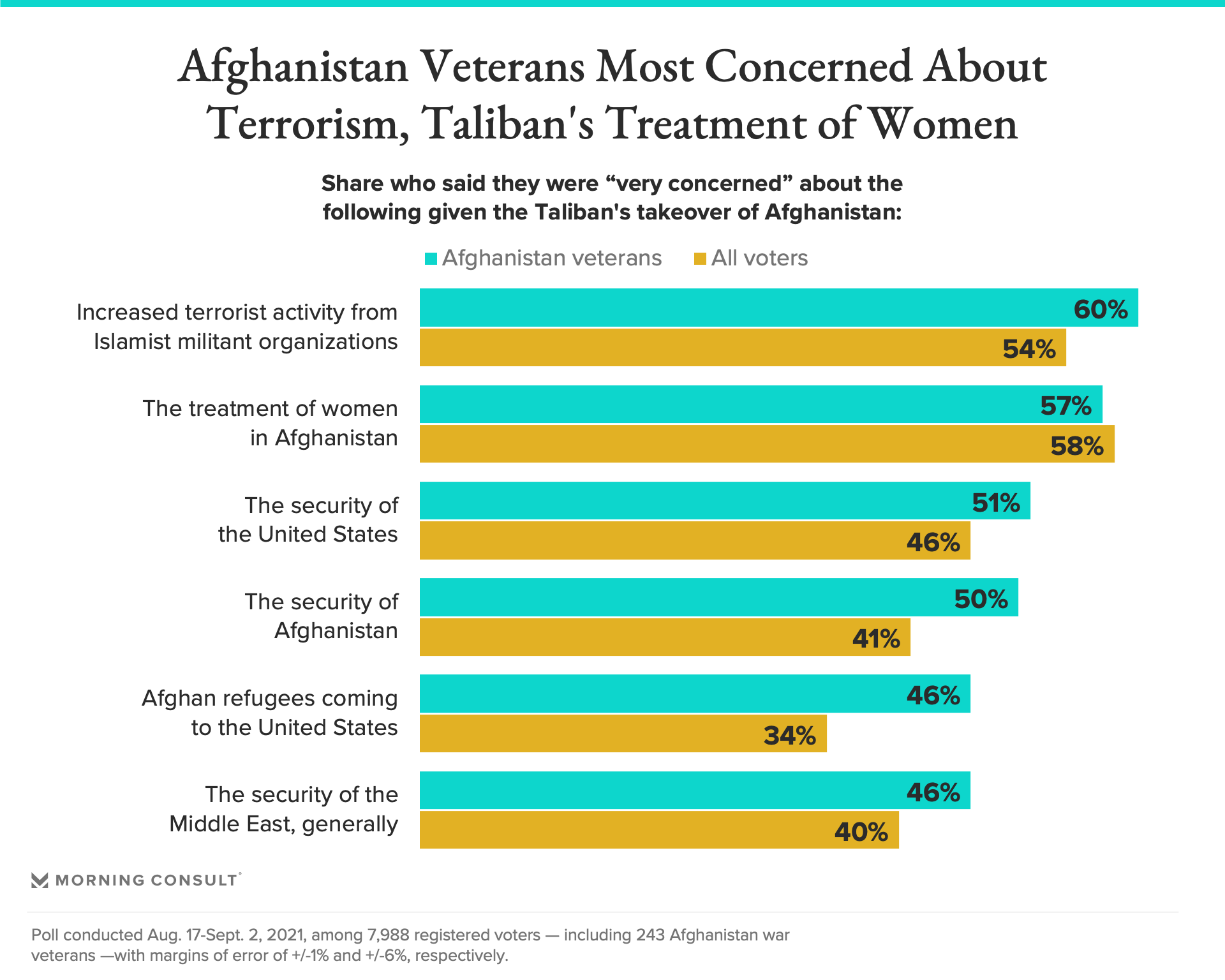 Three in 5 veterans of the war in Afghanistan said they were “very concerned” about increased terrorist activity from Islamist militant organizations following the Taliban’s takeover, and a similar share (57 percent) expressed strong apprehension about the treatment of Afghan women under the regime, roughly matching the level of concern among voters overall.

And while 77 percent of Afghanistan veterans support some sort of evacuation of Afghans from the country, they are, at 46 percent, 12 points more likely than the average voter to say they are “very concerned” about refugees coming to the United States.