Fans Don’t See Much of a Difference Among NFL’s Broadcast Partners, Top Talent 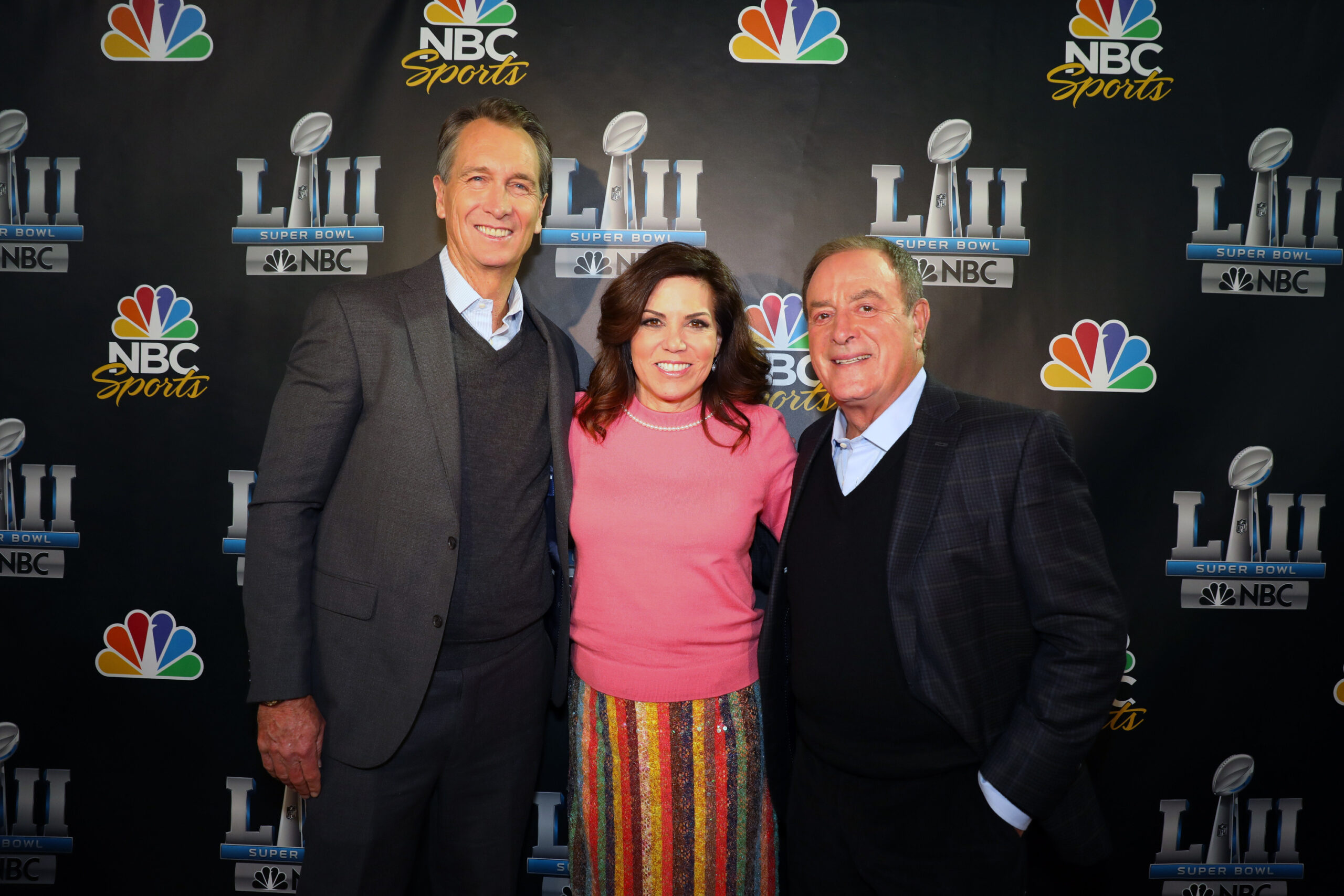 From left: Cris Collinsworth, Michele Tafoya and Al Michaels from NBC Sports in January 2018. In a new Morning Consult poll, NFL fans rated the NBC broadcast team as their favorite, though it was a virtual tie with CBS and Fox's top units. (Adam Bettcher/Getty Images for NBC Universal)
By Alex Silverman

There’s an adage in sports media that fans don’t turn on a game to watch the broadcasters. While that thinking hasn’t stopped networks from shelling out millions for top announcers and analysts (led by analyst Tony Romo’s reported $17 million annual salary with CBS), new research indicates fans don’t have much preference between the NFL’s broadcast partners or their top talent.

In a Morning Consult poll conducted ahead of the 2021 season, which begins Thursday on NBC, 72 percent of self-identified NFL fans said they have a favorable opinion of how NBC presents its “Sunday Night Football” telecasts — the highest mark of the league’s four major broadcast partners. Fox (70 percent), which airs games on Sunday afternoons as well as “Thursday Night Football.” and CBS (70 percent), which also airs matchups on Sunday afternoons, both fell within the 3-point margin of error for the 1,443 NFL fans surveyed, creating a virtual three-way tie. 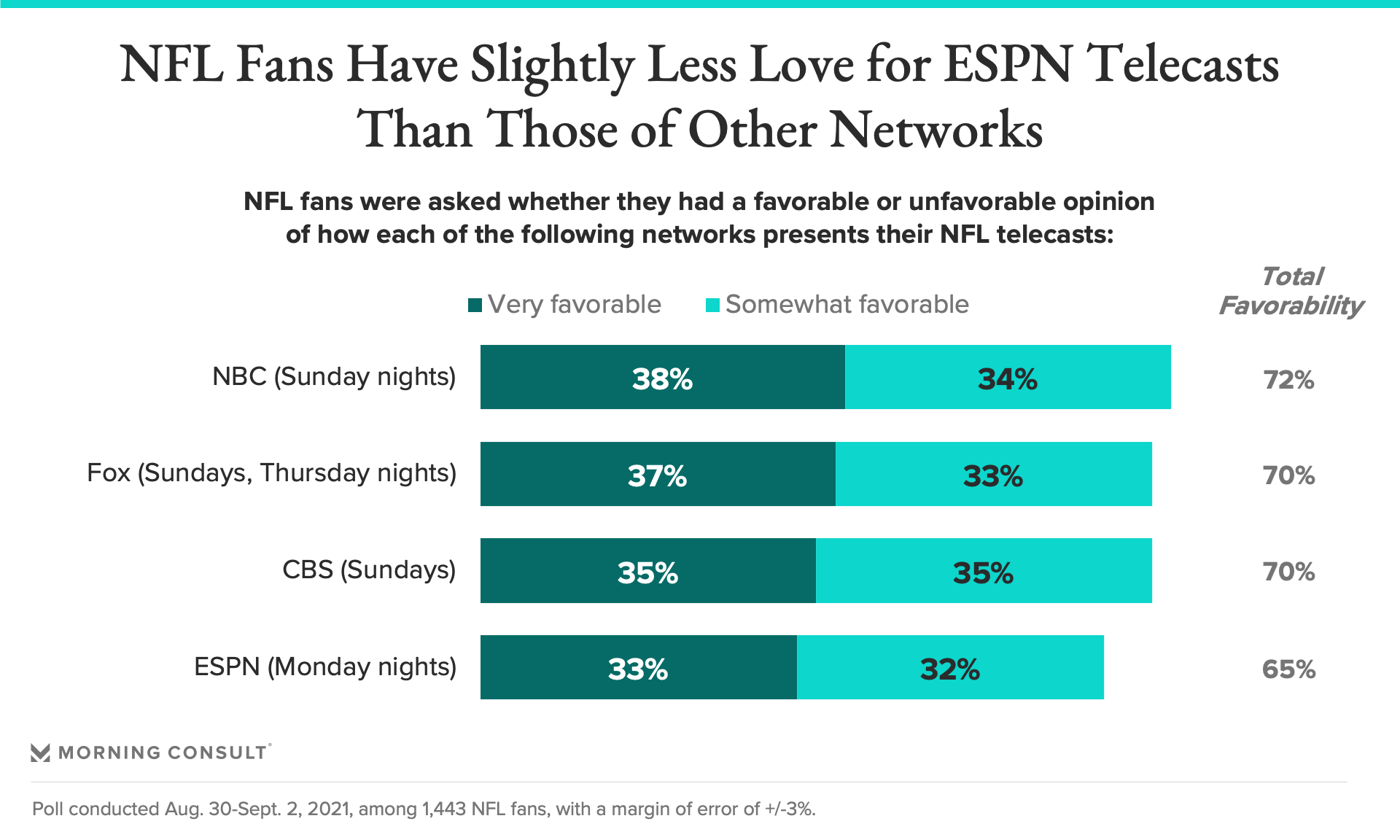 The league’s other broadcast partner, ESPN, garnered favorable responses from 65 percent of fans for its “Monday Night Football” telecasts — a healthy majority, but a slightly smaller share than its three peers. It also received unfavorable marks from 14 percent of fans, more than any of the broadcast networks.

The NFL signed long-term deals with all four networks earlier this year that will see each of them retain their current rights packages through the 2033 season, with the exception of Fox relinquishing “Thursday Night Football” to Amazon.com Inc. next season. ESPN’s parent company, Walt Disney Co., also snagged a spot in the Super Bowl rotation and some exclusive regular-season games for its broadcast network, ABC.

ESPN’s second-year “MNF” broadcast crew of play-by-play announcer Steve Levy, analysts Brian Griese and Louis Riddick and reporter Lisa Salters also garnered fewer plaudits from NFL fans than NBC’s “Sunday Night Football” unit and the “A” teams at Fox and CBS. Sixty-two percent of NFL fans who indicated they had heard of the ESPN crew said they had a favorable opinion of them, which ranked seventh out of the eight national broadcast teams included in the survey.

While the network is bringing back the same group for 2021, it is also introducing simulcasts on ESPN2 for select games featuring commentary by former NFL quarterbacks Peyton and Eli Manning. 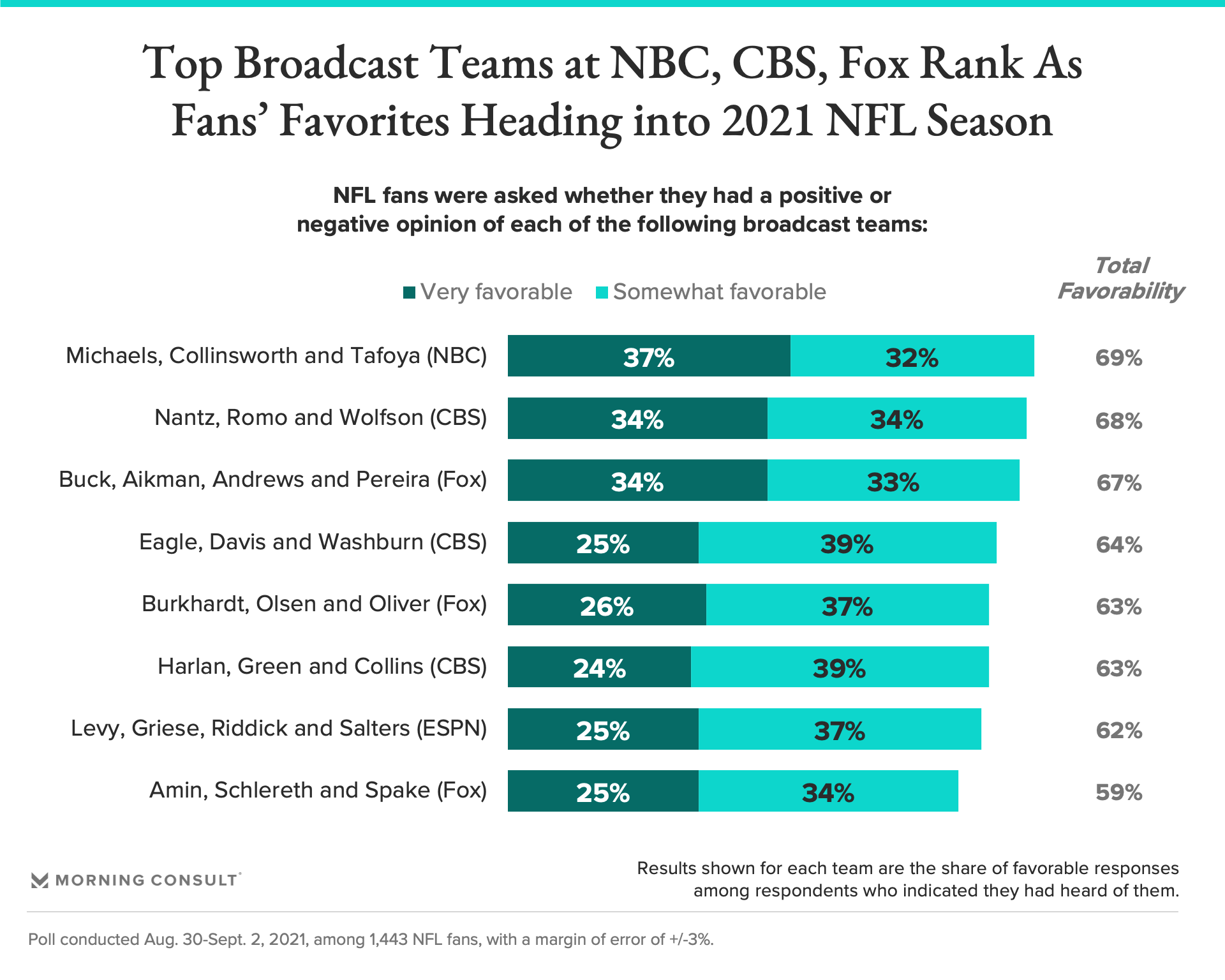 Responses from individuals who indicated they hadn’t heard of each team were removed from consideration to avoid giving an advantage to the more well-known teams. Still, the top talent at each of the three non-ESPN networks came out on top — and again within the margin of error of one another.

NBC’s veteran team of play-by-play announcer Al Michaels, analyst Cris Collinsworth and reporter Michele Tafoya drew favorable reviews from 69 percent of NFL fans who indicated they had heard of the group, including 37 percent who said they had a “very favorable” opinion of the crew. This season will be Michaels’ record 36th on the mic and reportedly the last under his current contract with NBC.

CBS’ top team of play-by-play announcer Jim Nantz, Romo and reporter Tracy Wolfson was close behind at 68 percent. The trio is entering their fifth year of calling the network’s top game each week.

The favorability gap between the top three teams and the rest of the pack wasn’t exactly a chasm either. The difference between the top-ranked NBC crew and the eighth-ranked Fox team of play-by-play announcer Adam Amin, analyst Mark Schlereth and reporter Shannon Spake was 10 points.

So why do networks continue to pay top dollar for talent? Steve Rosner, a partner at 16W Marketing who represents broadcast talent (including Collinsworth and Griese), said that after spending hundreds of millions to acquire the TV rights, it behooves the networks to “put their best foot forward” and maximize advertising revenue by delivering the best possible product.

“The best guys that sit in a number one seat, they’re going to be compensated accordingly because of the rating the game they’re doing brings,” Rosner said. “If not, the guy on the ‘7’ team would be paid the same as the guy on the number one team, and we know that’s not the case.”