Republican Women Want Paid Family Leave. The Party’s Men Are Starting to Get on Board

Consistently, more than half of Republican women support paid family and medical leave, even when it’s framed as a Democratic proposal. Republican men, meanwhile, haven’t always been on board but are coming around on the idea.

Morning Consult/Politico polling tracked public opinion among registered voters throughout August on various measures that could be included in Democratic lawmakers’ $3.5 trillion budget framework, which Biden has pitched as a way to strengthen the social safety net.

It’s an unusual split. Typically, men and women of the same party don’t differ strongly on policy, especially “pocketbook” issues that impact household budgets. There’s no significant difference between Democratic men and women voters on paid family leave, and Republican men and women tend to agree on other measures Democrats are expected to pursue via reconciliation.

“We tend to be the more traditional party and gender roles tend to be more traditionally defined,” said Kodiak Hill-Davis, founder and political director of Republican Women for Progress. “That leaves some gaps in knowledge, and when you consider the gap in understanding of why something would be beneficial to the family, it makes perfect sense that Republican women would see the benefit of that.”

Demographic trends could also explain why we see the early gap between Republican men and women, said Samuel Hammond, director of poverty and welfare policy at the moderate Niskanen Center who’s written about family-centered policies such as the child tax credit.

Republican-leaning lower-income and working-class households tend to have a clearer preference for more traditional family models or having a (typically) female caregiver, he said, compared to college-educated, white-collar families — particularly when that family includes a woman with a college degree — which tend to lean Democratic.

In the most recent poll, conducted Aug. 28-30, 62 percent of Republican women said they back paid family and medical leave being included in the Democratic reconciliation package. That share held relatively steady throughout the month, ticking up a few points since a July 31-Aug. 2 survey, when 59 percent said they supported the measure, within the sample’s margin of error of 5 percentage points.

Over the same time period, meanwhile, male GOP support for paid leave climbed from 44 percent to 56 percent. More drastically, opposition to paid family and medical leave has dropped significantly, from 51 percent to 33 percent.

This means that the gap in net support — the share who support minus the share who oppose — between Republican men and women has narrowed substantially. In the first poll, women’s net support for the measure was 35 points higher than men’s. That’s fallen to 10 points in the most recent poll. 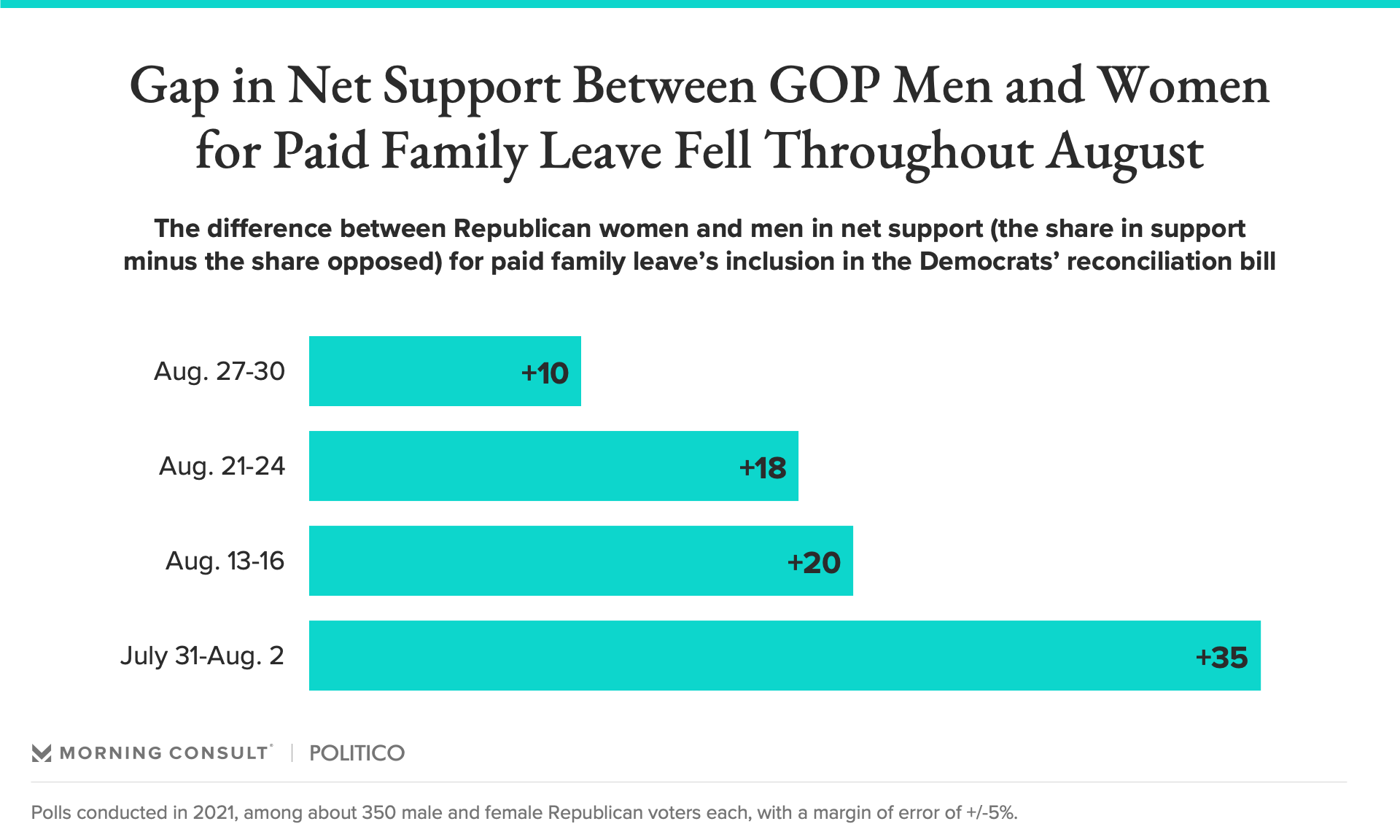 Hill-Davis speculated that climbing support from GOP men and diminishing opposition has something to do with the surging delta variant again threatening to close schools and raising the demands of women, especially at home.

“There’s a collective recognition of how hard the pandemic was on women, specifically,” she said. “If Republicans aren’t going to put up positive steps that would be seen as supporting the family, long term that could be a real risk.”

Still, it’s unlikely that GOP women will change their votes over it, either for a presidential election or for local representatives in the upcoming midterms, according to Republican strategists who focus on women in their party.

Related: Biden’s Child Tax Credit Gets Support From Over Half of Voters. A Similar Share Says It Should Expire

“It’s hard for me to think that this is a talking point that you’re going to win the women’s vote or the suburbs with,” said Joanna Burgos, a Republican strategist at OnMessage Inc. and former deputy communications director at the National Republican Congressional Committee, who noted that GOP women, along with the rest of the party, tend to prioritize other issues. “If a voter hears a candidate talk about family leave favorably, it will probably improve their image of that candidate, but it won’t improve their place on the ballot.”

For Democrats, there might be some room to disentangle disaffected, educated women from the Republican Party, particularly in the suburbs, where some voters have already moved away from the party because of former President Donald Trump’s tenure, Hill-Davis said, adding that it depends on how effective Democrats are able to message the various measures in the reconciliation package.

But that’s a narrow opportunity. The core of Republican female voters aren’t likely to be swayed by paid family leave, even if they support it, she said.

“Even if Republican women agree in principle with paid family leave, I think the talking points of reconciliation overall are going to diminish any possible chance that Democrats peel off a significant number of Republican women,” Hill-Davis said.

Related: Targeting the Wealthy and Corporations to Pay for Infrastructure Remains a Popular Option Among Voters
Health Coverage Health Insurance