Hospitals, Other Health Care Players Are Seeing ‘the Bar of Scrutiny’ Raised by Biden Regulators 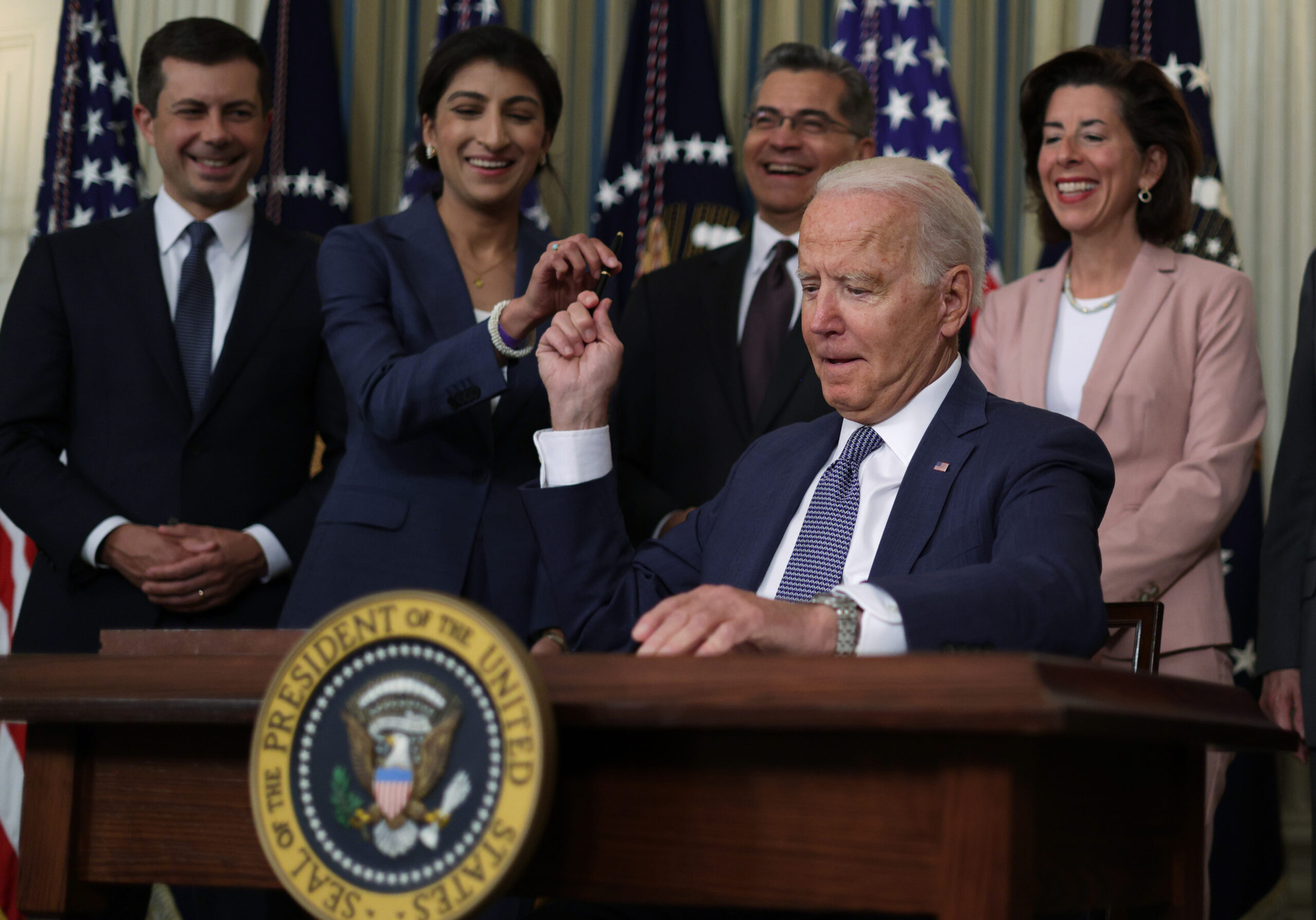 President Joe Biden passes a signing pen to Federal Trade Commission Chair Lina Khan during an executive order signing to promote competition in the American economy on July 9, 2021, in Washington, D.C. “This administration is going to take a stronger approach to any antitrust enforcement than we’ve previously seen,” said Alexis Gilman, an antitrust lawyer who previously worked in the FTC’s competition bureau. (Alex Wong/Getty Images)
By Gaby Galvin

When President Joe Biden tapped vocal critics of big tech companies for key antitrust roles, companies like Amazon.com Inc. went on high alert. But he’s pledged to crack down on anticompetitive behavior across sectors — including “unchecked mergers” in health care, and former officials and industry watchers say hospitals and other groups should tread carefully.

Officials like Lina Khan, who was sworn in as chair of the Federal Trade Commission in June, and Tim Wu of the White House’s National Economic Council, haven’t gone public with how they plan to tackle health care consolidation. But early action from the administration points to hospital price transparency and heightened merger scrutiny as top priorities.

“This administration is going to take a stronger approach to any antitrust enforcement than we’ve previously seen,” said Alexis Gilman, an antitrust lawyer at Crowell & Moring who worked in the FTC’s competition bureau, primarily during the Obama administration. “The bar of scrutiny does seem to have been raised.”

Biden laid out his broad antitrust agenda in an executive order in July that singled out rural hospital closures and higher hospital prices in markets with little competition as reasons to support stronger FTC guidelines for health care mergers. Now, Gilman said the FTC appears to be taking more time to review details on proposed mergers that may have otherwise been cleared quickly or seen as “non-problematic.”

The FTC’s public stances so far “reflect an agency that believes that prior enforcement has been a bit lax, and they’re going to tighten that up,” Gilman said.

Industry watchers are taking cues from Sutter Health’s $575 million antitrust settlement, which received final approval from a federal judge in late August after a yearslong legal battle over allegations that the nonprofit health system in California engaged in price gouging.

Notably, Health and Human Services Secretary Xavier Becerra sued Sutter Health in 2018 when he was California’s attorney general, and before joining the Biden administration, he said in March that he would continue to promote health care competition so patients “aren’t left holding the bag when big players dominate the market.”

Given Becerra’s involvement, the case could offer a roadmap for health care competition policy in the Biden era at both the state and federal levels, said Elizabeth Mitchell, president and chief executive of the Purchaser Business Group on Health, which helped bring together employers and unions to file the lawsuit against Sutter Health.

“I think it is very important that some of what we achieved in the Sutter case is applied more broadly,” Mitchell said. That includes efforts to promote hospital price transparency, a priority left over from the Trump administration.

Meanwhile, Gilman points to the Sutter Health case and a federal settlement with North Carolina-based Atrium Health in 2018 as signs that health systems should “be a bit more cautious” when drawing up contracts that could be seen as anti-competitive, such as those that  include measures that ban insurers from “steering” patients toward less expensive medical care or revealing pricing information.

“I think there is — as a result of those two enforcement actions — increased risk, at the least for the largest systems that have meaningful shares in their local markets,” Gilman said.

Provider groups are readying their defenses. In August, the American Hospital Association sent a letter to antitrust officials calling for more reviews of health insurance companies, saying payers have “largely escaped close scrutiny for conduct and practices that adversely impact both consumers and providers.” The group declined an interview request.

David Maas, an antitrust lawyer at Davis Wright Tremaine LLP who works with health care providers, noted that ramped-up scrutiny on hospitals could hurt smaller physician groups or rural hospitals that are the only option for care in some communities.

“We already have aggressive enforcement in that space, and it often is good and leads to more competitive marketplaces,” Maas said. “But just in the interest of being more aggressive, to push for even more enforcement in health care, I think could lead to some unfortunate outcomes, because a lot of health care providers are struggling.”

Hospital mergers have slowed this year, with 27 deals completed in the first half of 2021 compared with 43 in the same time period last year, according to a Kaufman Hall analysis. While the number of deals has fallen, revenue is on par with previous years as health systems focus more on regional partnerships in new markets rather than acquiring smaller independent hospitals, the analysis said.

Hospital Merger Activity Trending Down in 2021 Amid COVID-19 Constraints

Number of announced U.S. hospital mergers and acquisitions per year

Other health industries in regulatory crosshairs

Hospitals aren’t the only health care groups getting a closer look in the Biden era. The FTC has also signaled interest in vertical mergers, when companies that don’t compete directly consolidate, and is looking to unwind life science company Illumina Inc.’s $7.1 billion acquisition of Grail Inc., which was finalized last month despite a lack of clearance from the FTC or European regulators.

In Sept. 2 letters to GOP lawmakers who questioned the agency’s stance, Khan said the FTC is at a “crossroads” and has taken an “unduly permissive” approach in the past that’s allowed for massive companies to form across industries.

Antitrust lawyers are closely watching the Illumina-Grail case, which will be “the first vertical merger case the FTC litigates in decades,” Gilman said.

Another key deal to watch: Michigan-based Beaumont Health and Spectrum Health said last week they’re proceeding with a merger that would give the combined health system control of 22 hospitals, an outpatient business and a health plan covering 1 million people. If approved, the merger is expected to be finalized this fall.

Related: COVID-19 Accelerated Use of Digital Therapeutics, but Coverage Issues and Regulatory Questions Could Slow Their Momentum

“In the coming years, the for-profit insurers will start following United’s lead in acquiring, or effectively acquiring, more and more providers,” Maas said.

Some analysts are skeptical of the Biden administration’s ability to meaningfully rein in such deals.

“The idea that now Biden is going to direct the FTC to pay closer attention to health care mergers is a lot like closing the barn door after the horses have run out,” said Michael Abrams, co-founder and managing partner at health care consultancy Numerof & Associates. But “when you combine the payer and the provider, it’s the consumer who, more than ever, needs protection.”

Going forward, Gilman said he expects agencies to “be less likely to either clear or settle vertical merger transactions” right away, which “could have some chilling effect.” But regulators will also have to “triage” top priority cases, given the FTC said it is being hit with a “tidal wave” of merger filings.

In late July, for example, the FTC dropped a complaint against AbbVie Inc. accusing the drugmaker of blocking generic competition for its testosterone drug AndroGel, but said it still believes AbbVie engaged in illegal, anti-competitive behavior to earn its “ill-gotten gains.”

The clearest early signal of how aggressively the Biden administration will push health care competition may come not from merger reviews, but from its efforts on price transparency. HHS has proposed increasing fines for hospitals that don’t comply with a rule requiring them to publicly post their prices, from up to $109,500 annually to more than $2 million. Research indicates most hospitals are ignoring the rule, which went into effect this year.

Mitchell said price transparency is the “low-hanging fruit” to promote competition in health care, and that similar rules should apply to health insurers. Abrams, meanwhile, warned that transparency measures could still be watered down in the federal government’s rule-making and enforcement processes.

“The way that it’s handled by HHS will be, I think, an index of just how serious they are about the more patient-oriented, consumer-oriented, market-oriented approach to health care,” Abrams said.

Related: As Congress Cools Its Public Option Ambitions, a Proxy Fight Is Playing Out in the States
Health Insurance Joe Biden Providers