59% of U.S. adults said they support the new requirement for large companies 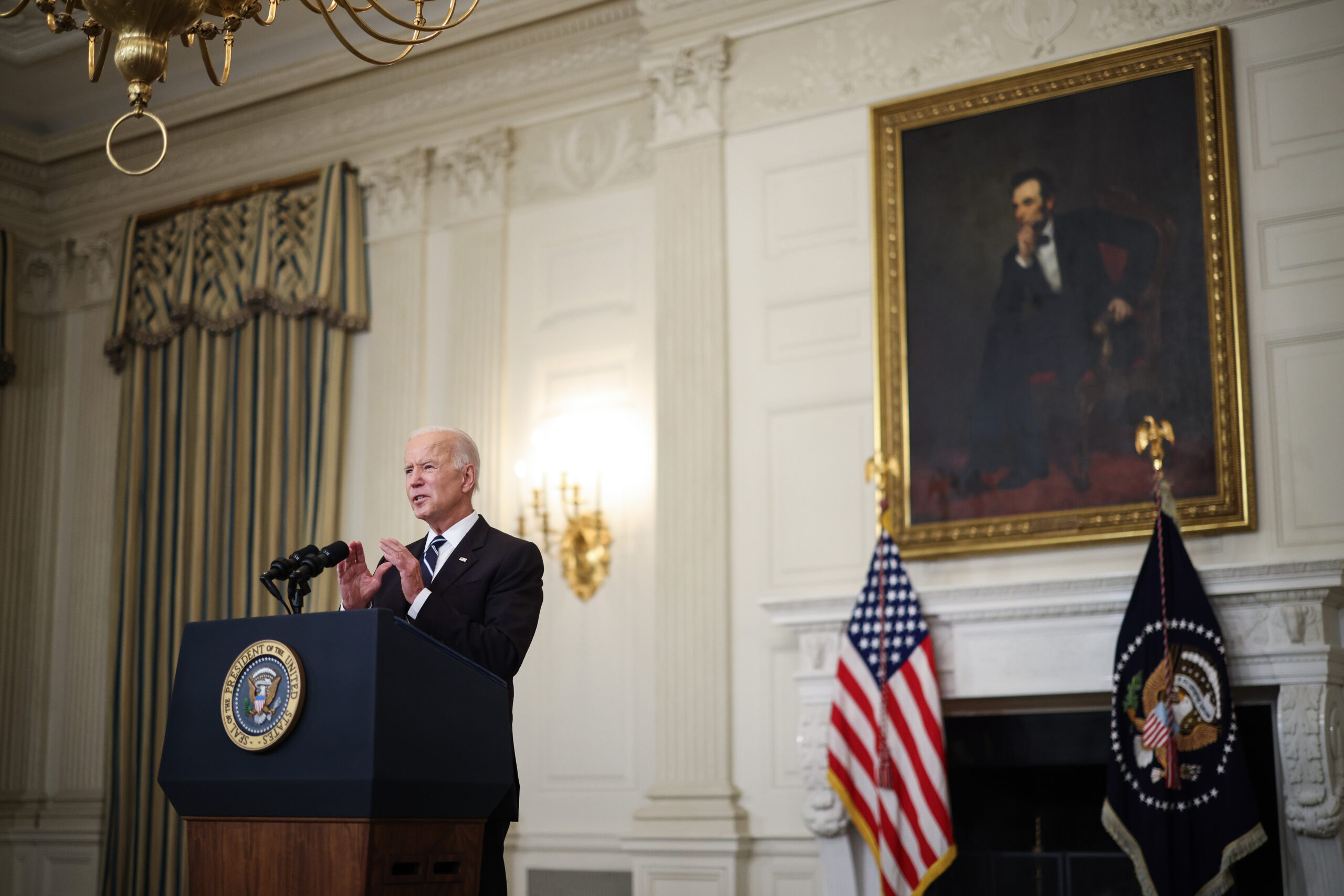 President Joe Biden announces he instructed the Department of Labor to draft a rule mandating that all businesses with 100 or more employees require their workers to get vaccinated or face weekly testing. A clear majority of adults (59%) said they support that requirement. (Kevin Dietsch/Getty Images)
By Alyssa Meyers

Last week, President Joe Biden announced a mandate stipulating that large businesses require their employees to be vaccinated against COVID-19 or undergo weekly testing. Companies that comply are likely to reap the benefits from consumers, while those that don’t could suffer, according to new polling from Morning Consult.

A majority of U.S. adults (59 percent) said they support corporations with more than 100 employees requiring their staffs to be vaccinated or enforcing weekly testing, according to the Sept. 10-13 survey of 4,400 respondents, which has a margin of error of 1 percentage point. 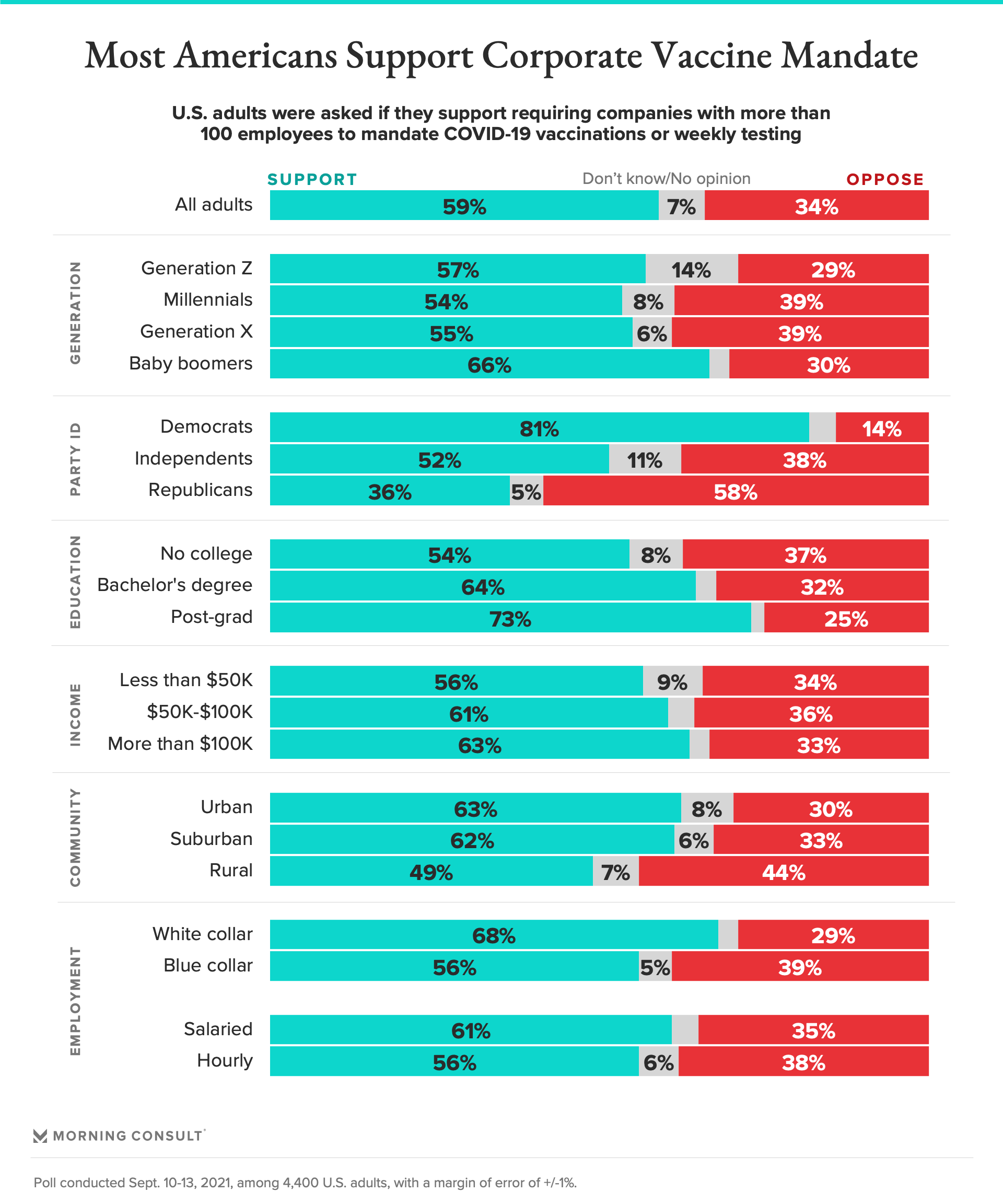 That majority support holds true across several demographic groups, including all generations. Baby boomers were the strongest proponents among the four generations, with 66 percent saying they support the requirement.

Those with high levels of education and high incomes were more likely to support the vaccine mandate than their counterparts. White-collar workers were also more in favor of the measure than blue-collar workers, while urban residents and suburbanites more strongly supported it than rural dwellers. Given the survey’s margin of error, there was not much separating support among hourly workers (56 percent) from that of salaried ones (61 percent).

The biggest divide, unsurprisingly, fell along party lines: 36 percent of Republicans support corporate vaccination mandates, according to the poll, compared to 81 percent of Democrats.

Related: White House’s COVID-19 Vaccination Mandates Have the Support of About 3 in 5 Americans

While most consumers (70 percent) said they wouldn’t go so far as to boycott companies that ignore the mandate, 31 percent said they would consider taking that action against brands that resist Biden’s new rule. (Numbers may not add up to 100 percent due to rounding.) White-collar workers were more likely to say they would participate in a boycott than blue-collar workers, 37 percent to 28 percent.

Workers in the technology sector were more likely than the general public to boycott companies that resist the rule, with about half (49 percent) of that group saying they would consider it. 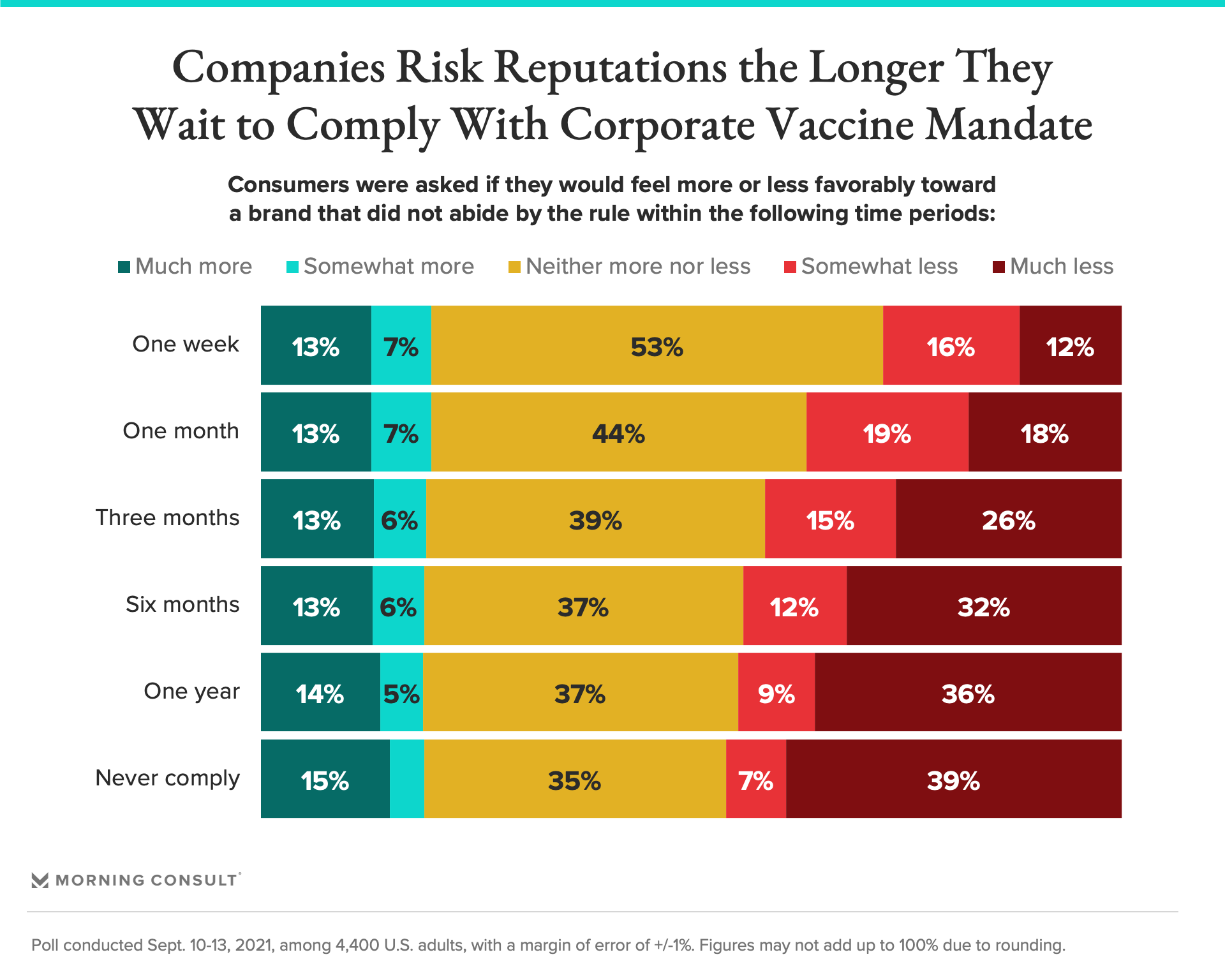 Even if it doesn’t spark many all-out protests, the decision to ignore the mandate might also impact brand image. The longer corporations wait to comply with the new rule, the more they risk reputational damage, the survey suggests. 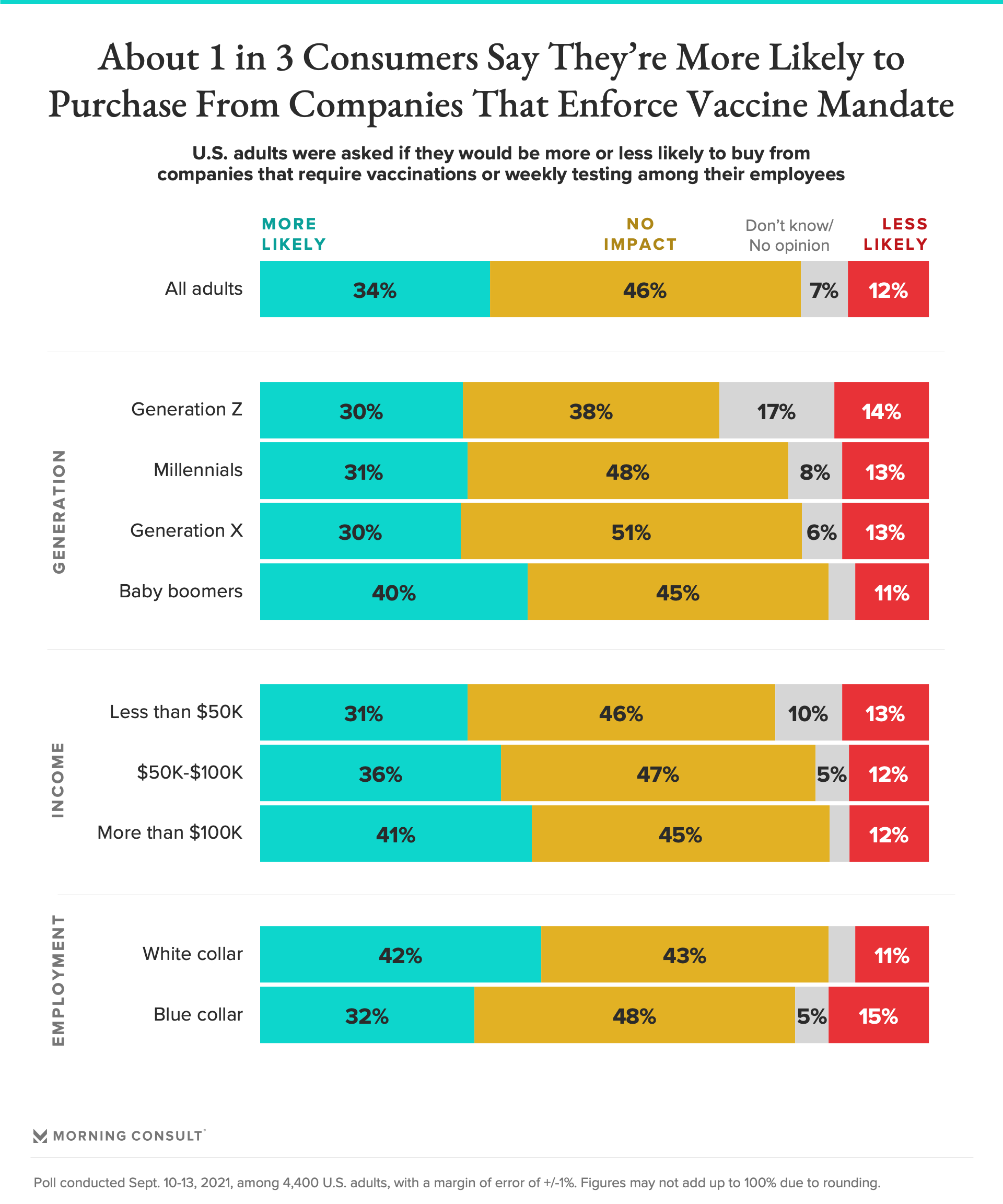 And for those that do fall in line, it could ultimately help their bottom line.

Roughly 1 in 3 consumers (34 percent) said they’d be more likely to buy products from companies that adhere to Biden’s plan, compared with 12 percent who said they’d be less likely to purchase from those businesses. Baby boomers, those who earn more than $100,000 per year and white-collar employees were especially likely to spend money with brands that abide by the rule.

The same share of tech workers who said they might boycott companies that ignore the mandate also said they’d be more likely to buy products from the ones that enforce it (49 percent). 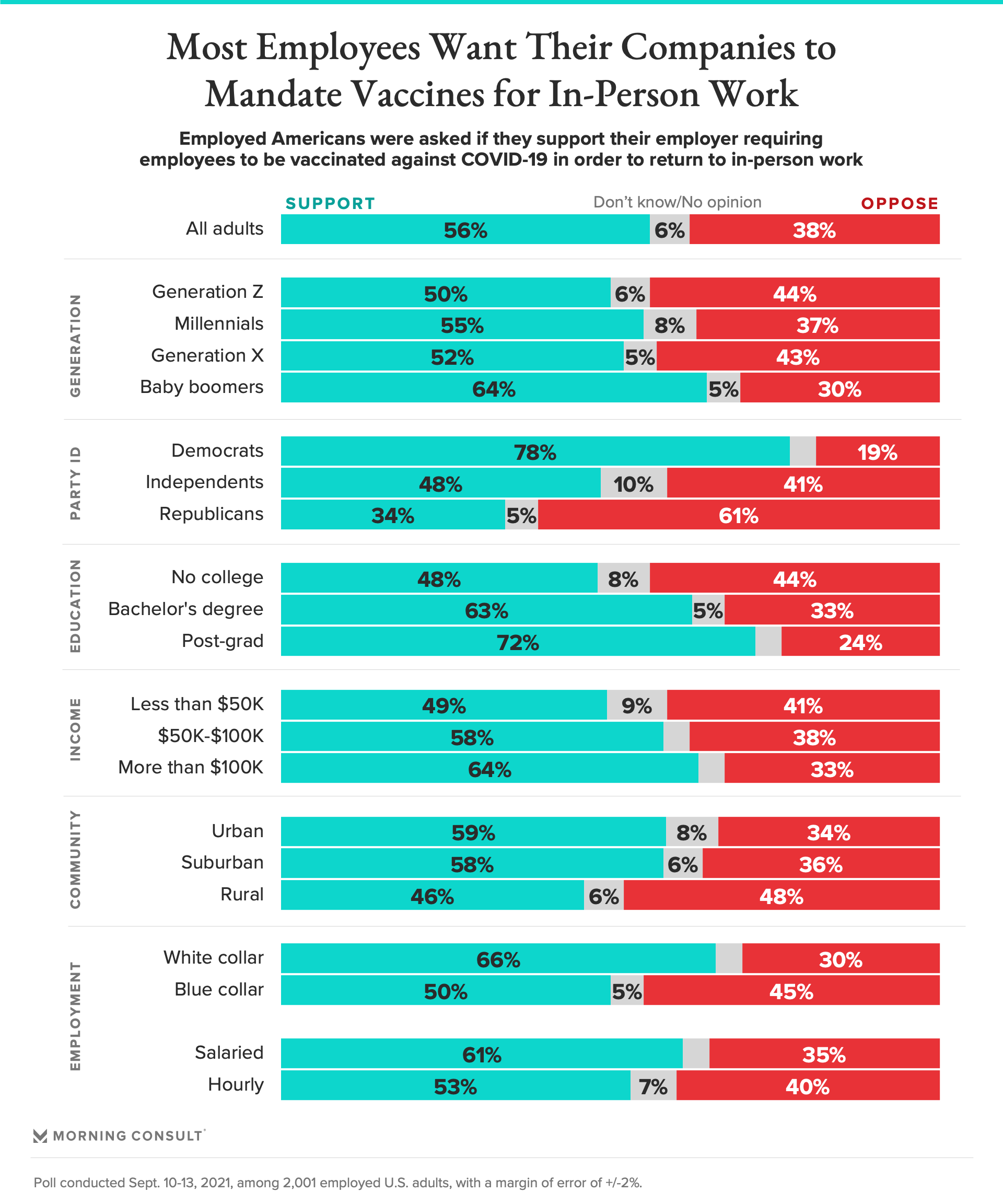 Morning Consult asked employed adults how they feel about their own organizations requiring vaccines against COVID-19 for those returning to in-person work, and a majority (56 percent) said they support the move. That’s roughly the same share who agreed when asked in June (58 percent).