Newsom Ends Recall Even More Popular Than He Began the Year

The effort to turn California red galvanized Democrats behind the first-term incumbent, who was never actually unpopular 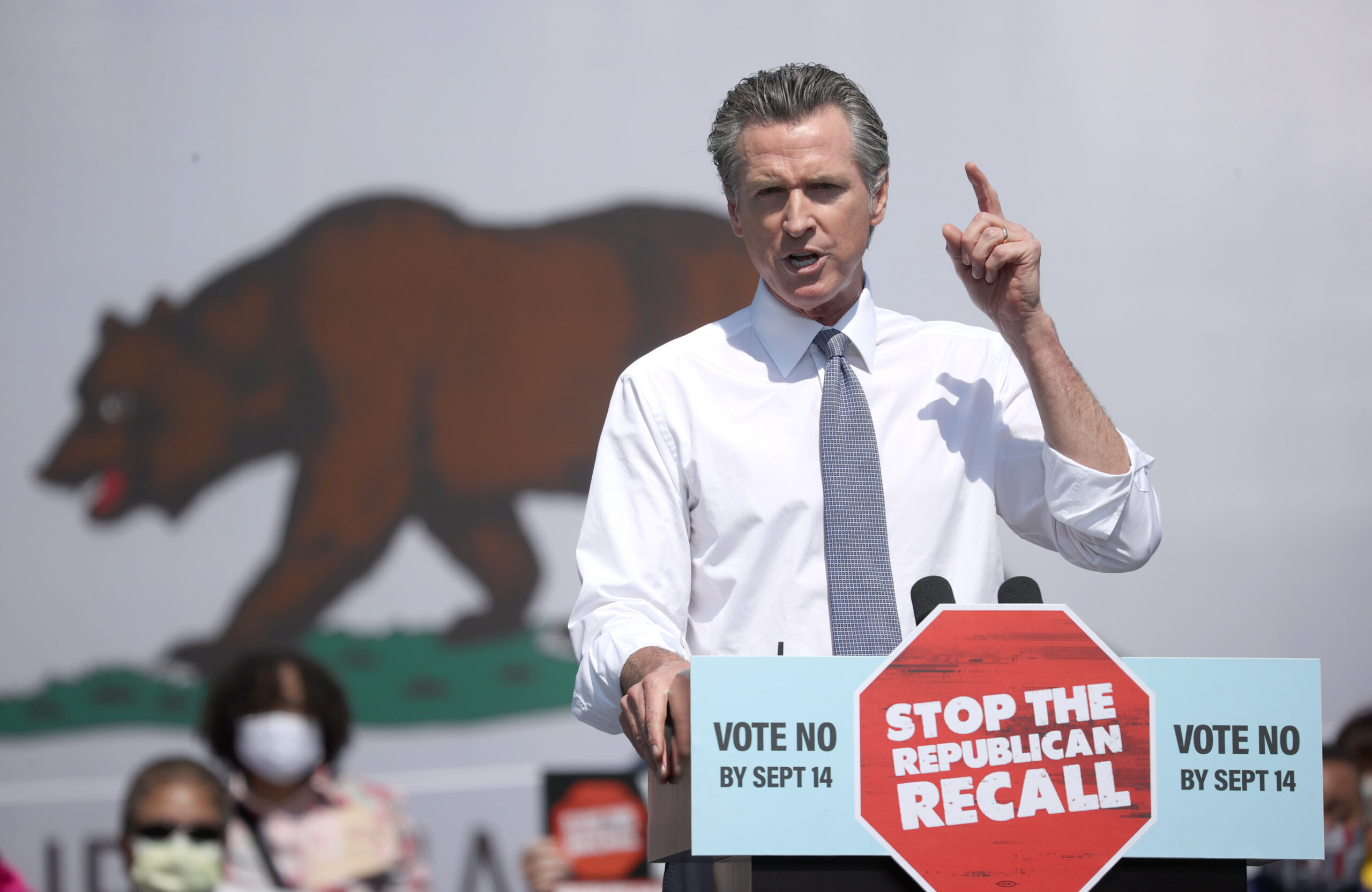 Gov. Gavin Newsom (D) speaks during a Sept. 8 campaign event with Vice President Kamala Harris in San Leandro, Calif. In the wake of Newsom's victory in the state's recall election, Morning Consult polling shows the race was never actually that close, with the incumbent's approval rating never dipping below 52 percent during the course of the year. (Justin Sullivan/Getty Images)
By Eli Yokley

Gov. Gavin Newsom (D-Calif.) began the year with an approval rating over 50 percent, despite wintertime dings to his previously stellar reputation as another wave of the COVID-19 pandemic ravaged the country, including America’s largest state.

And on Tuesday, after a multimillion-dollar campaign over removing him from office, he easily defeated a recall effort that saw him grow increasingly popular over the course of the year, according to Morning Consult Political Intelligence tracking that casts doubt on the idea that he was ever truly in danger of losing the governor’s mansion. 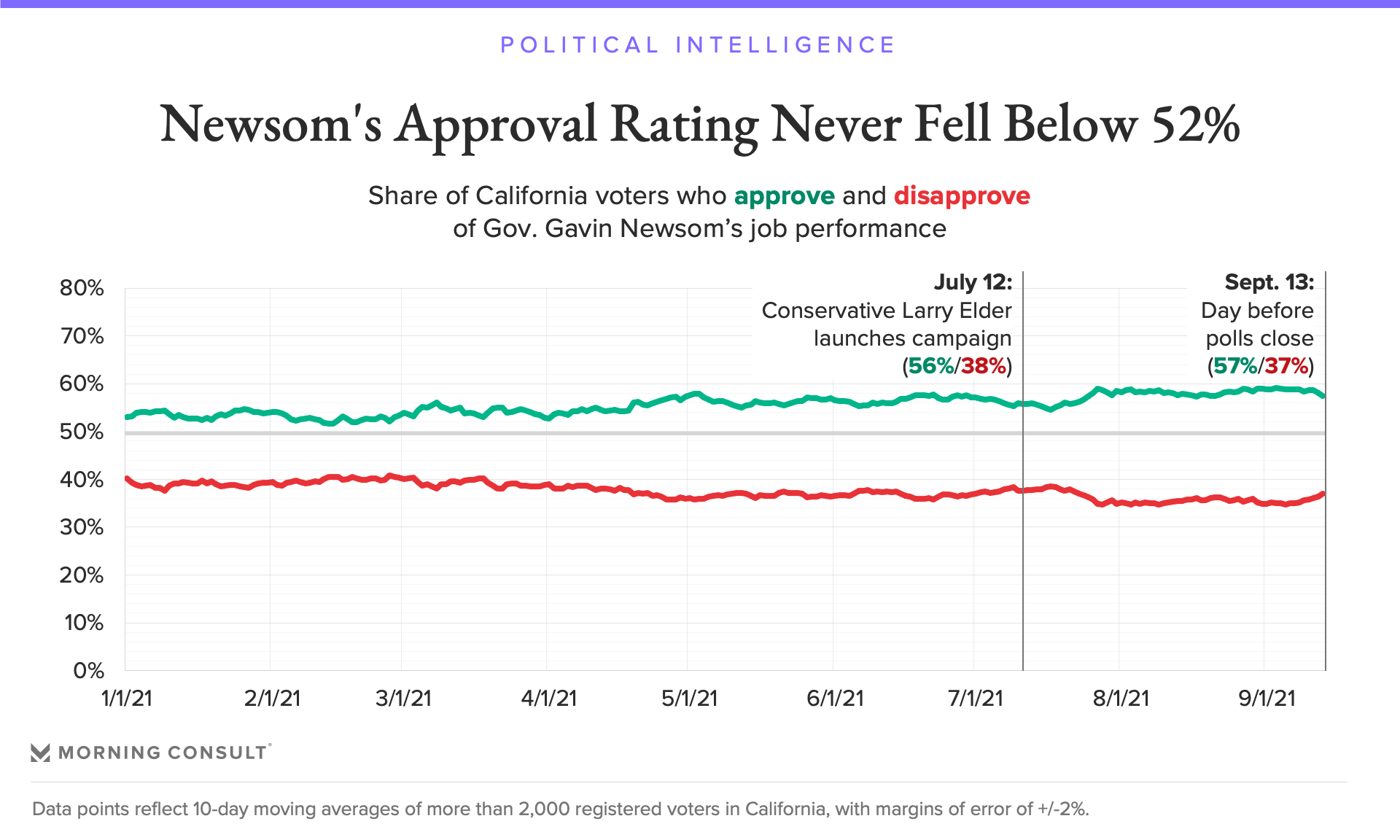 The latest surveys, conducted Sept. 4-13 as voting in the recall entered its final days, found that 57 percent of California voters approved of Newsom and 37 percent disapproved. That marks an improvement from where he began the year, when 53 percent approved and 40 percent disapproved. What’s more, Morning Consult’s polling shows Newsom’s approval rating among all Golden State voters never dipped below 52 percent, 2 percentage points higher than the 50 percent in support he needed to avoid a recall.

Over the course of the year, Newsom – whose popularity skyrocketed early on in the pandemic before coming back to Earth in late 2020 amid rising COVID-19 cases and increased business restrictions, as well as a scandal related to his maskless visit to the fancy French Laundry restaurant — was helped along by a significant rise in approval from voters of his own party. Compared with surveys conducted Jan. 1-10, the latest polling found his net approval rating – the share who approve of his job performance minus the share who disapprove – increased 15 percentage points among Democratic voters.

Most of that improvement came before conservative talk radio host Larry Elder announced his campaign on July 12, but Elder’s entrance into the contest and the fear of a Republican takeover that accompanied it appears to have breathed new energy into Newsom’s base, as reflected by FiveThirtyEight’s catalogue of the sporadic polling on the recall over the past two months. 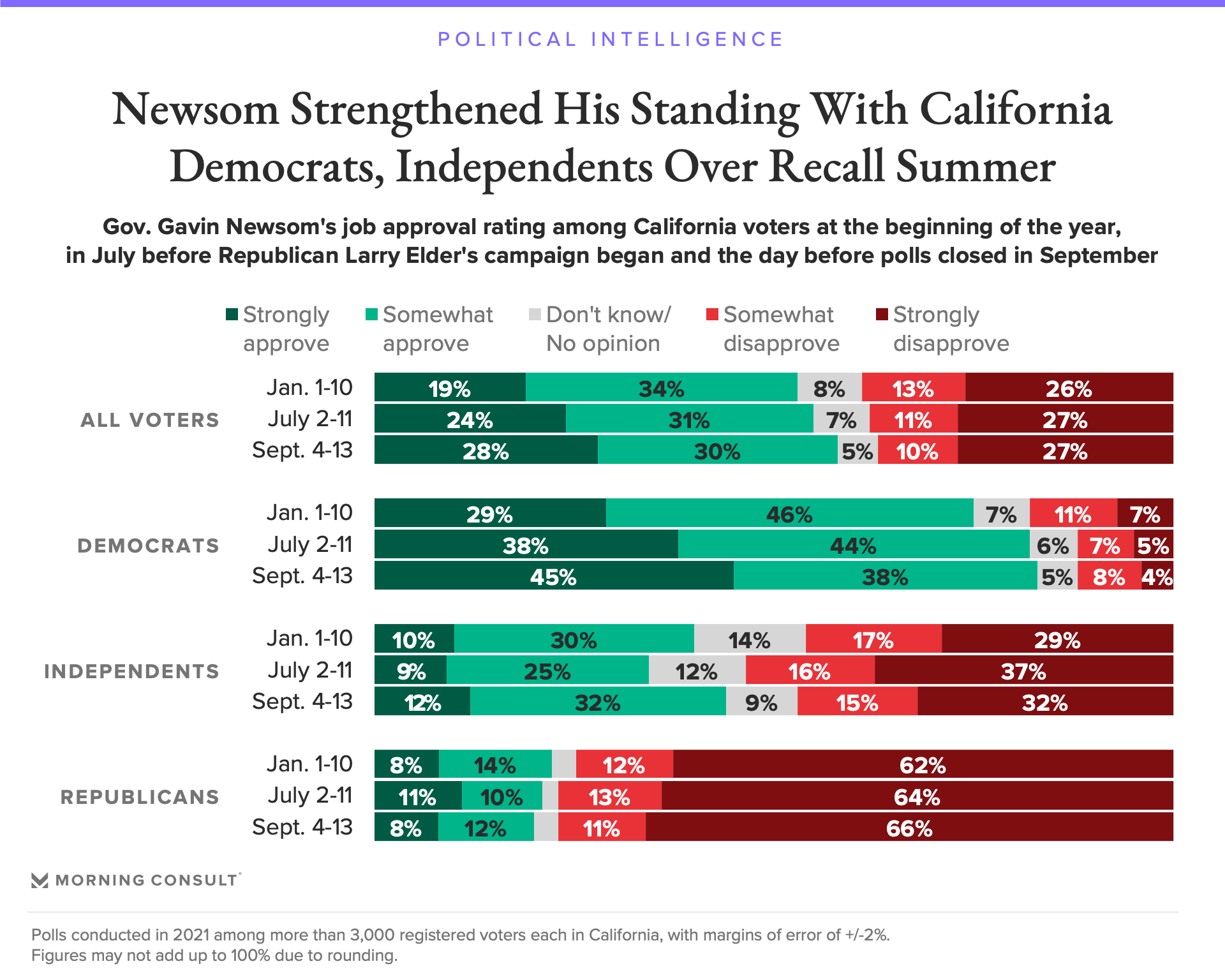 The latest Morning Consult surveys found 45 percent of California Democrats strongly approve of Newsom’s job performance, up 7 points since the days before Elder launched his campaign in July. Among independents, Newsom’s net approval rating increased 16 points over the same time period, though he is still 3 points underwater with the group.

Newsom’s standing increased among Democrats and unaffiliated voters, but it has hardly shifted among Republicans since the beginning of the year. And while the data suggests the GOP was a prime target for motivation – 2 in 3 “strongly” disapprove of the governor – it wasn’t enough to overcome the Democratic Party’s solid advantage in the Golden State.