Congressional Democrats Lead on Generic Ballot, but Republicans Have Gained Edge in Enthusiasm

43% of voters would back Democratic congressional candidate, while 39% would support the Republican 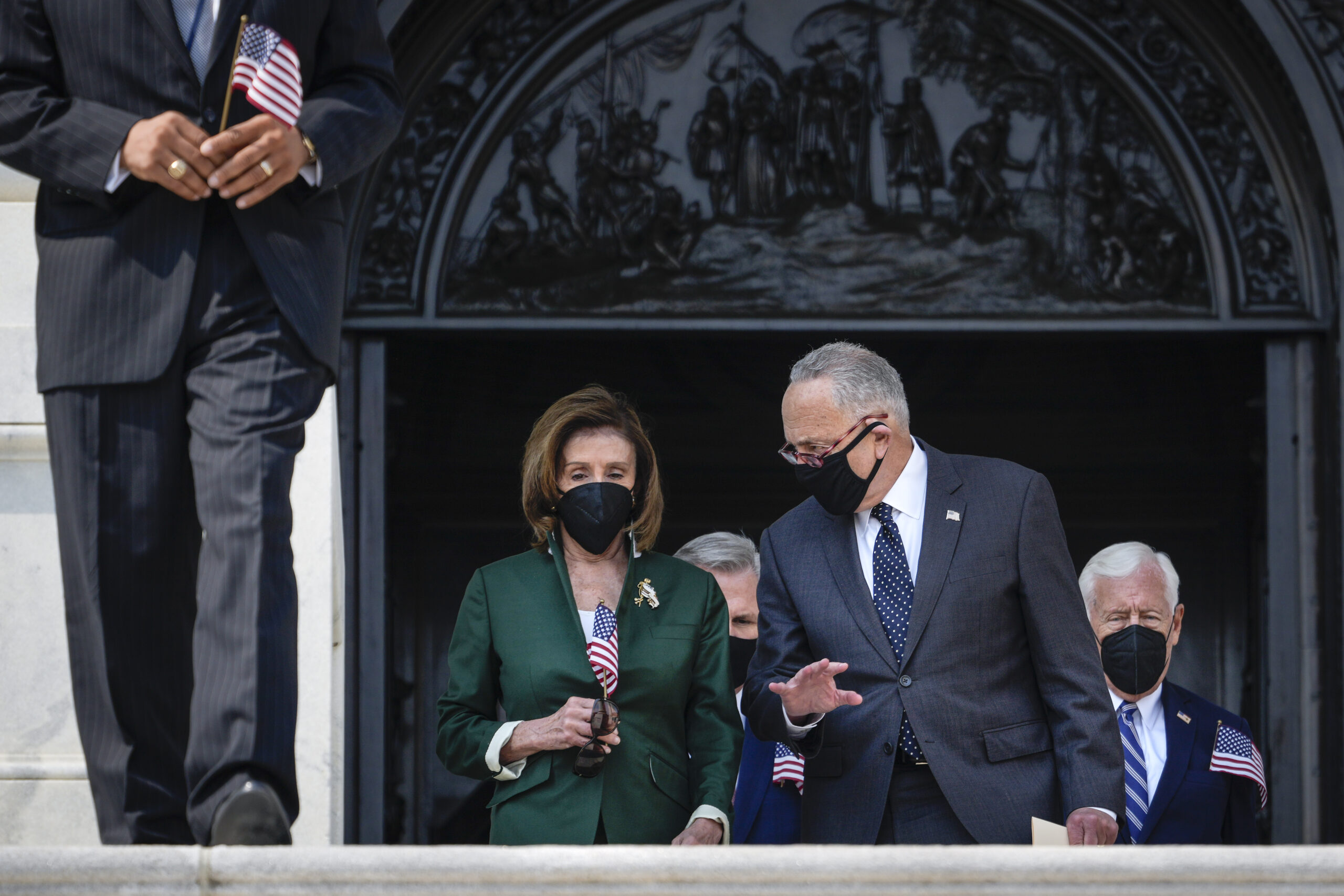 House Speaker Nancy Pelosi (D-Calif.) and Senate Majority Leader Chuck Schumer (D-N.Y.) speak as they walk down the steps of the U.S. Capitol on Monday. New polling shows congressional Democrats lead Republicans on the generic ballot, but the latter has an enthusiasm advantage heading into the midterm elections. (Drew Angerer/Getty Images)
By Eli Yokley

More than a year out from the midterm elections, congressional Democrats have a slight upper hand when it comes to whom voters nationwide are thinking they’ll support next year. But according to a new Morning Consult/Politico survey, the Democratic Party’s slim majorities are threatened by growing enthusiasm among the GOP’s base.

The Sept. 10-13 survey, marking Morning Consult’s first test of the generic congressional ballot in the 2022 election cycle, found 43 percent of voters would back the Democratic candidate in their district if the election were held today, compared with 39 percent who would vote GOP and 17 percent who are unsure. 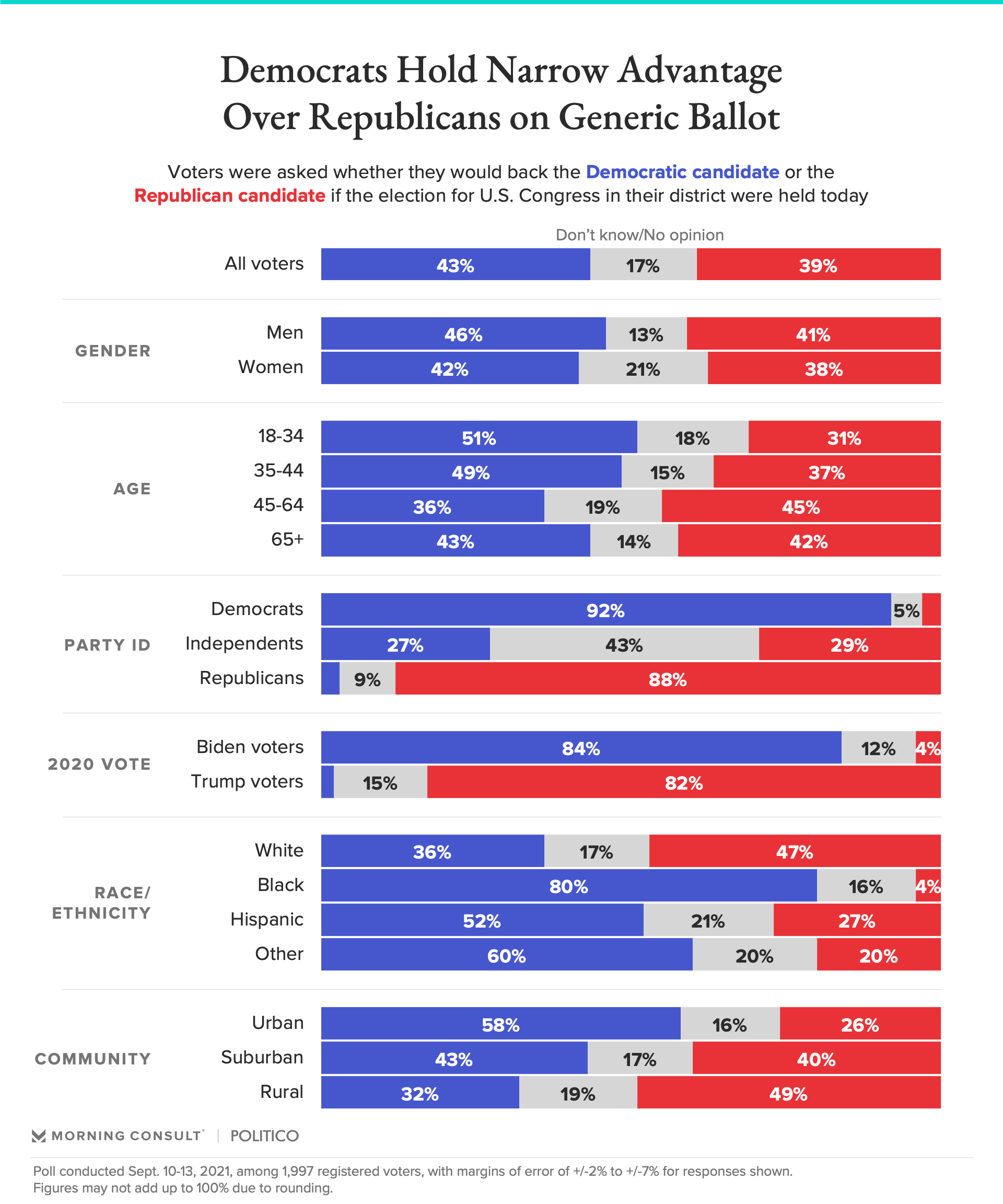 At this point, 60 weeks from Election Day, neither party has a significant advantage in the suburbs or with independents, two groups that have trended away from Republicans during the past two election cycles and caused the party to lose its grip on both Capitol Hill and the White House. The poll also found neither party had a strong advantage among men or women, though men were slightly more likely than women to say they’d vote for a Democrat.

The generic ballot metric is one metric, along with the number of seats the president’s party is defending, that forecasters use to predict seat swings in the midterms. Alan Abramowitz, a political science professor at Emory University, wrote for Sabato’s Crystal Ball at the University of Virginia Center for Politics earlier this year that a single-digit lead on the generic ballot question would give Democrats a chance to maintain their Senate majority, but that “Democrats probably need a larger lead to keep control of the House” due to redistricting.

The model “indicates the Democrats would have to have a fairly healthy lead on the generic ballot poll to hold the House,” said Kyle Kondik, managing editor of Sabato’s Crystal Ball, in an email Tuesday.

Related: Biden Has a Growing Problem With Independents

Compared with a Morning Consult/Politico survey conducted in September 2017, Democrats have slightly more support than they did ahead of the 2018 midterms (43 percent now versus 40 percent) — but so do Republicans (39 percent now versus 37 percent). The disparity is driven by stronger initial numbers from the bases of both parties and fewer voters who are likely to say they are unsure.

But while Democrats and Republicans — as well as Americans who voted for either party’s presidential nominee in 2020 — are roughly equal in their likelihood to say they’ll back the respective party’s congressional candidates, the poll found that Democrats are now trailing the GOP when it comes to excitement for the midterms. 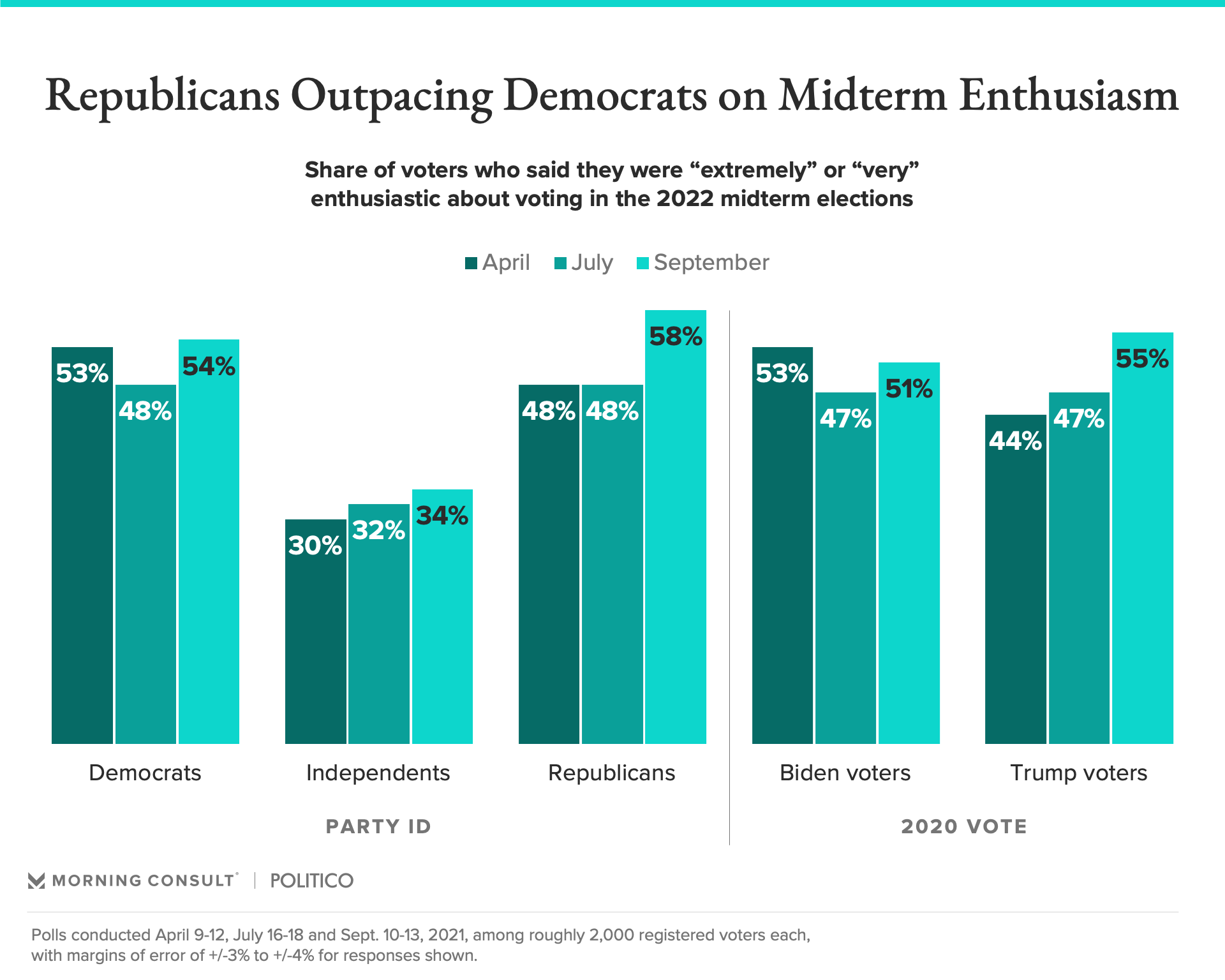 Among Republican voters, 58 percent say they’re “extremely” or “very” enthusiastic to vote in the 2022 elections, up 10 points since surveys conducted earlier this year and higher than the 54 percent of Democratic voters who say the same. The Democratic numbers are in line with figures from a survey conducted in April, when they held a narrow enthusiasm advantage.

That imbalance aligns with other Morning Consult surveys, which have shown that Republicans are far more likely to “strongly” disapprove of President Joe Biden than Democrats are to “strongly” approve of the current commander in chief.