Both in Kentucky and nationwide, McConnell’s image among Republicans has improved over the course of the year 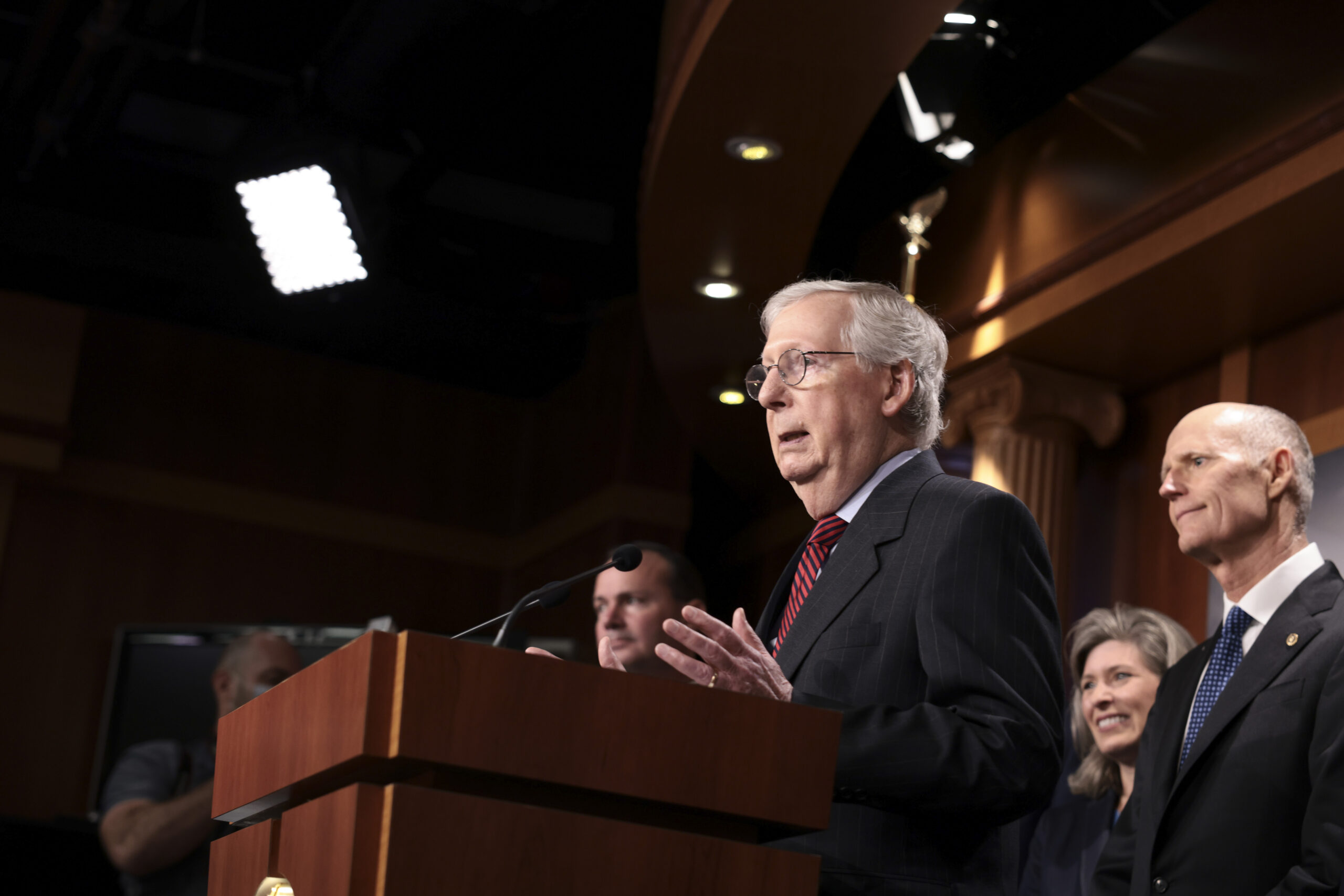 Flanked by his Republican colleaguesl Senate Minority Leader McConnell (R-Ky.) speaks at a Wednesday news conference. Amid the latest round of reporting detailing former President Donald Trump's efforts to oust the Kentucky Republican from his perch atop the Senate GOP caucus, new polling shows McConnell's image among Republican voters in Kentucky and across the country has recovered in recent months. (Anna Moneymaker/Getty Images)
By Eli Yokley

President Donald Trump has been unrelenting in his criticism of Senate Minority Leader Mitch McConnell, and now, after months of public attacks, he’s reportedly plotting to dethrone the Kentuckian as the leader of the Senate Republicans.

But there’s no apparent appetite among GOP senators for his ouster — and polling conducted nationwide over the past several months shows the bulk of the party’s voters aren’t really on board the McConnell hate train either.

According to the latest Morning Consult/Politico survey, 43 percent of Republican voters hold favorable views of McConnell, up 13 percentage points from a low reached in February after Trump called McConnell a “dour, sullen, unsmiling political hack” for his condemnation of the 45th president’s behavior surrounding the Jan. 6 Capitol attack.

Monthly averages of weekly surveys conducted since Jan. 6 show that since May, McConnell’s net favorability (the share with favorable views minus the share with unfavorable views) has remained above water as Trump’s attacks became less salient and positive sentiment about President Joe Biden and the Democrats declined nationwide. 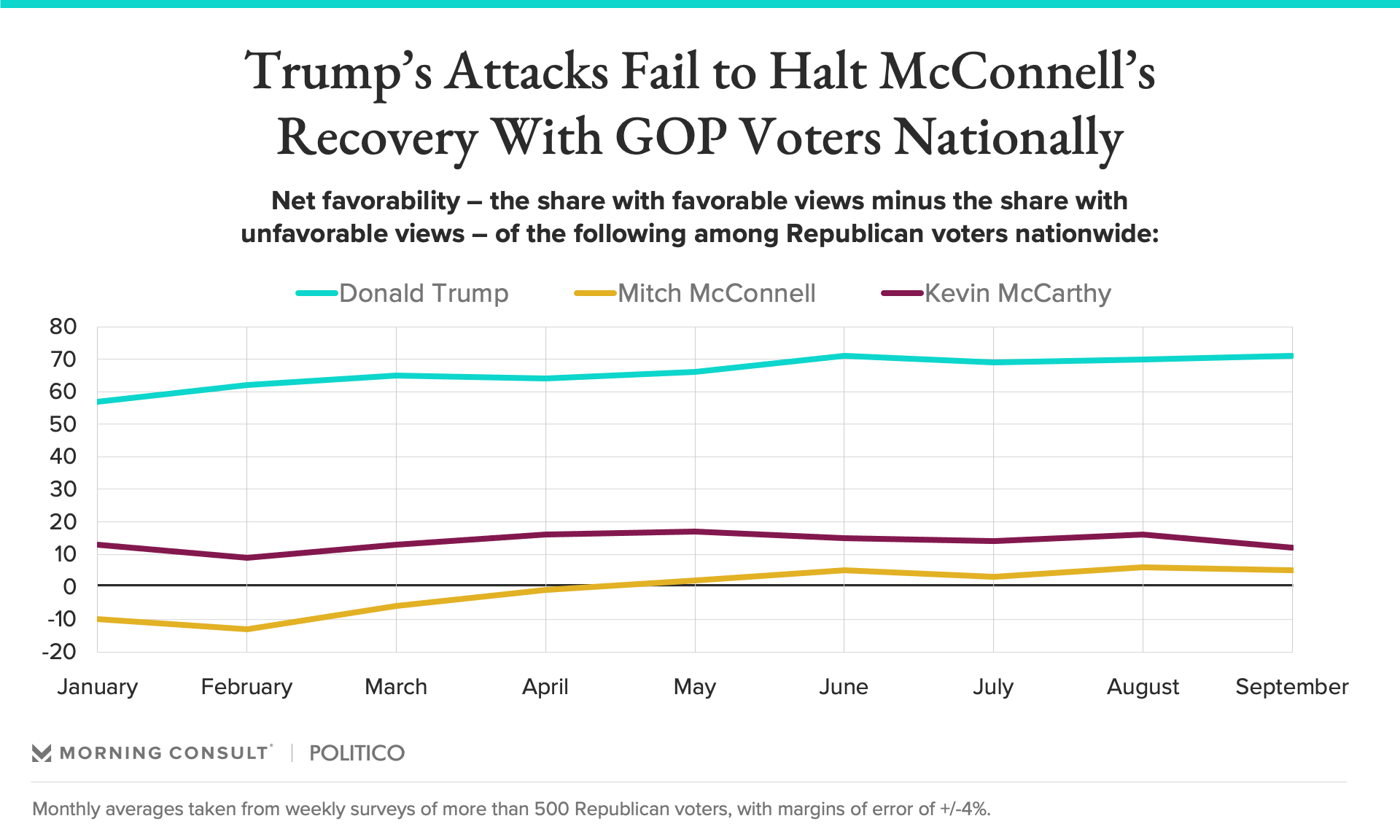 By that metric, the Kentuckian is just slightly less popular among Republicans than House Minority Leader Kevin McCarthy (R-Calif.), who has tied himself much more closely to the former president since his own post-Jan. 6 critique. It leaves little incentive for Senate Republicans to humor Trump’s efforts to depose their longtime leader, as reported by The Wall Street Journal, especially as McConnell continues to stall the Democratic agenda on Capitol Hill.

McConnell’s improving fortunes among Republican voters appear to be aided in no small part by his approach to the former president. The Kentucky Republican has repeatedly declined to answer questions about his relationship with Trump and largely avoids talking about him altogether.

Along with the reputational gains nationally, that approach has also helped McConnell improve his image with the party’s base back home. 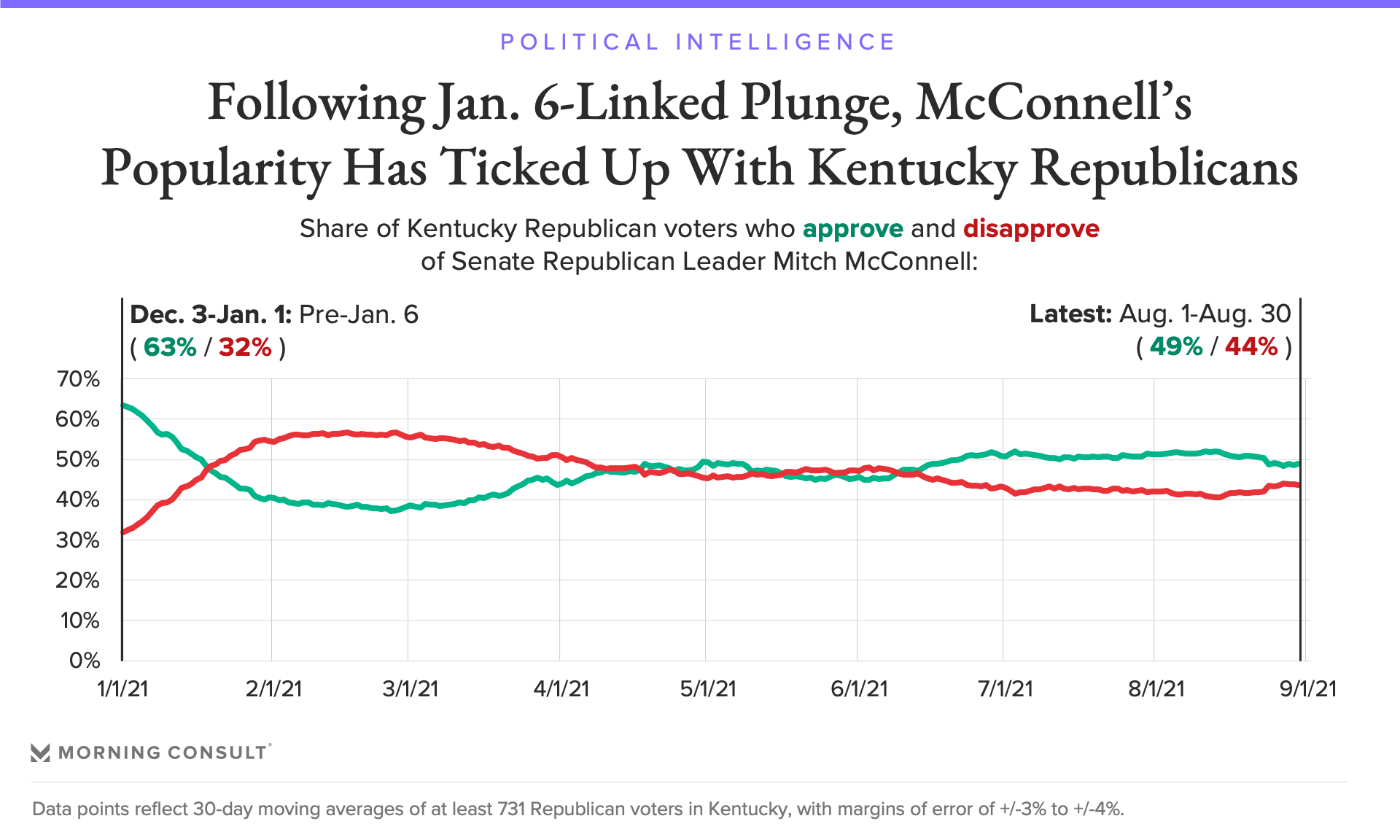 In Morning Consult Political Intelligence polling conducted Aug. 1-30, 49 percent of Kentucky Republicans approved of McConnell’s job performance, up from 37 percent in surveys conducted from late January to late February. The trajectory of his standing in the statewide surveys tracks roughly with the timeline of views nationally: a dip following his intense criticism of Trump’s behavior leading up to and during the Jan. 6 insurrection, followed by a renaissance after May.

Reporting indicates that McConnell doesn’t view Trump as a factor with staying power: In comments attributed to him in a new book by journalists Bob Woodward and Robert Costa, the Republican leader spoke of “a clear trend” in the party away from a Trump-dominated GOP, and said “sucking up to Donald Trump is not a strategy that works.”

While the jury is still out on McConnell’s perspective, intraparty dynamics suggest the 45th president still has a grip: Scores of GOP candidates for the midterm elections are vying for Trump’s endorsement, and as far as primaries go, those candidates appear more in line with the party’s voters.

Trump is by far the most popular Republican in the country, with an 84 percent favorability rating among Republicans, part of a double-digit improvement in his average monthly net favorability since January.

Only 15 percent of Republicans nationwide hold unfavorable views of Trump in the latest survey, compared to 37 percent who dislike McConnell.