Which Golfers Are In Line for Huge Pay Days Under the PGA Tour’s New Popularity Program? 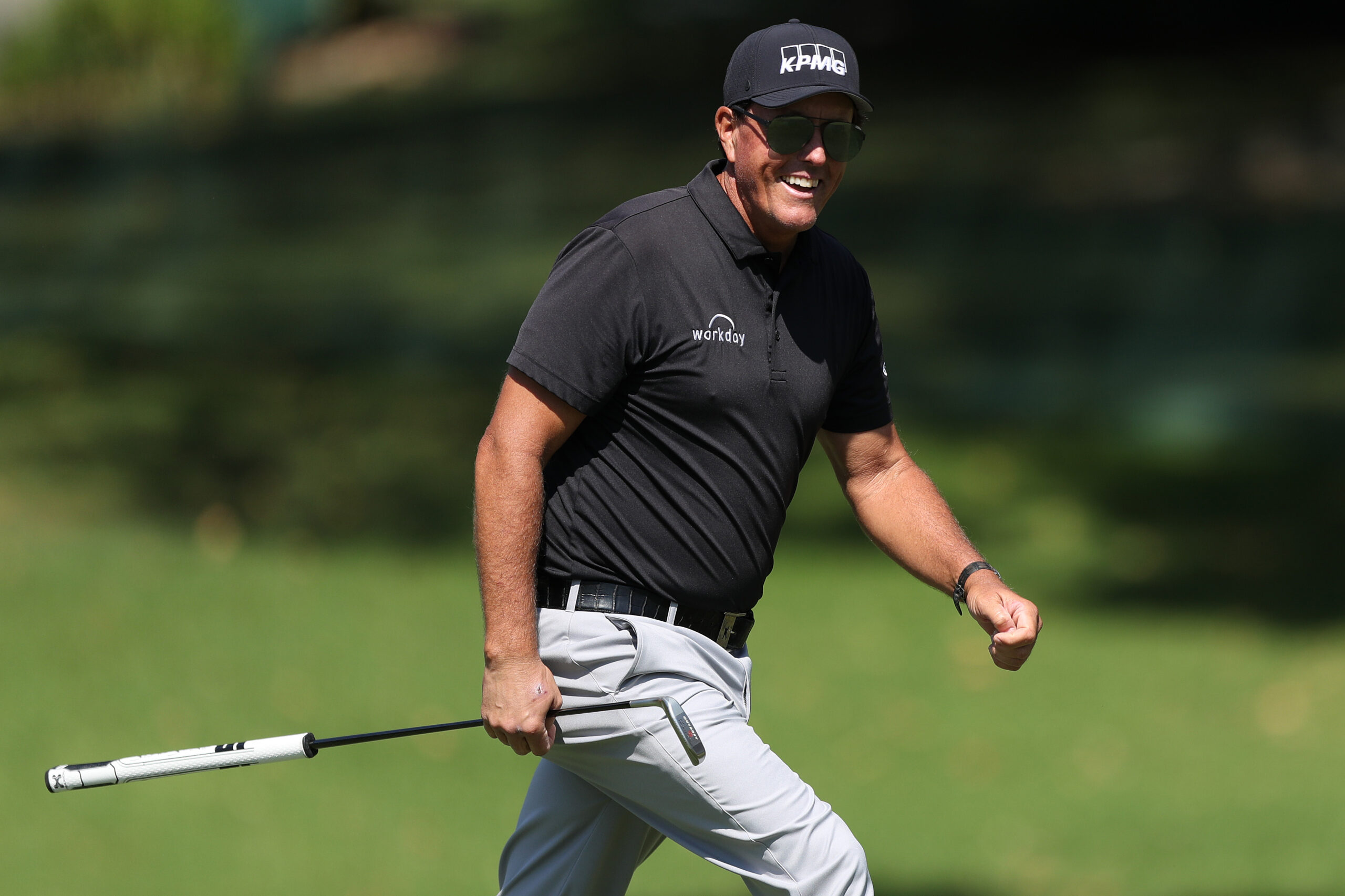 Phil Mickelson reacts to a shot during the Fortinet Championship on Sept. 16, 2021 in Napa, Calif. Ranked the No. 34 golfer in the world, Mickelson garnered one of the highest favorability ratings for PGA Tour golfers, according to a new Morning Consult survey. (Meg Oliphant/Getty Images)
By Alex Silverman

Jon Rahm, the top-ranked player in the Official World Golf Rankings, and reigning FedExCup champion Patrick Cantlay have each been rewarded handsomely for their success on the course this year. But a new survey suggests neither is likely to earn one of the PGA Tour’s new popularity payments.

A Morning Consult survey coinciding with the start of the 2021-22 PGA Tour season, which began last week, found there is little overlap between the top-ranked players in the world and the most popular players among golf fans. In fact, Dustin Johnson, the No. 2-ranked golfer in the world, was the only player in the performance-based top 10 to crack the top 10 in favorability rating.

Earlier this year, Golfweek reported that the PGA Tour plans to award a total of $40 million in bonus money to the 10 golfers responsible for attracting the most eyeballs to the sport throughout the 2021 calendar year, via the introduction of its “Player Impact Program.” The tour formulated the program following attempts by a proposed rival, the Premier Golf League, to lure away several of its most popular players with lucrative offers.

The criteria used to determine which players will earn the extra cash reportedly includes popularity in Google Search; time on screen during live telecasts; the familiarity and appeal of a player’s brand; engagement across social and digital channels; and the amount of media coverage earned.

The PGA has said it does not plan to reveal which players receive the bonuses. While the Sept. 16-20 survey doesn’t offer a perfect proxy for the tour’s “Impact Score,” it provides a sense of which players are most capable of driving engagement among a broad swath of fans. 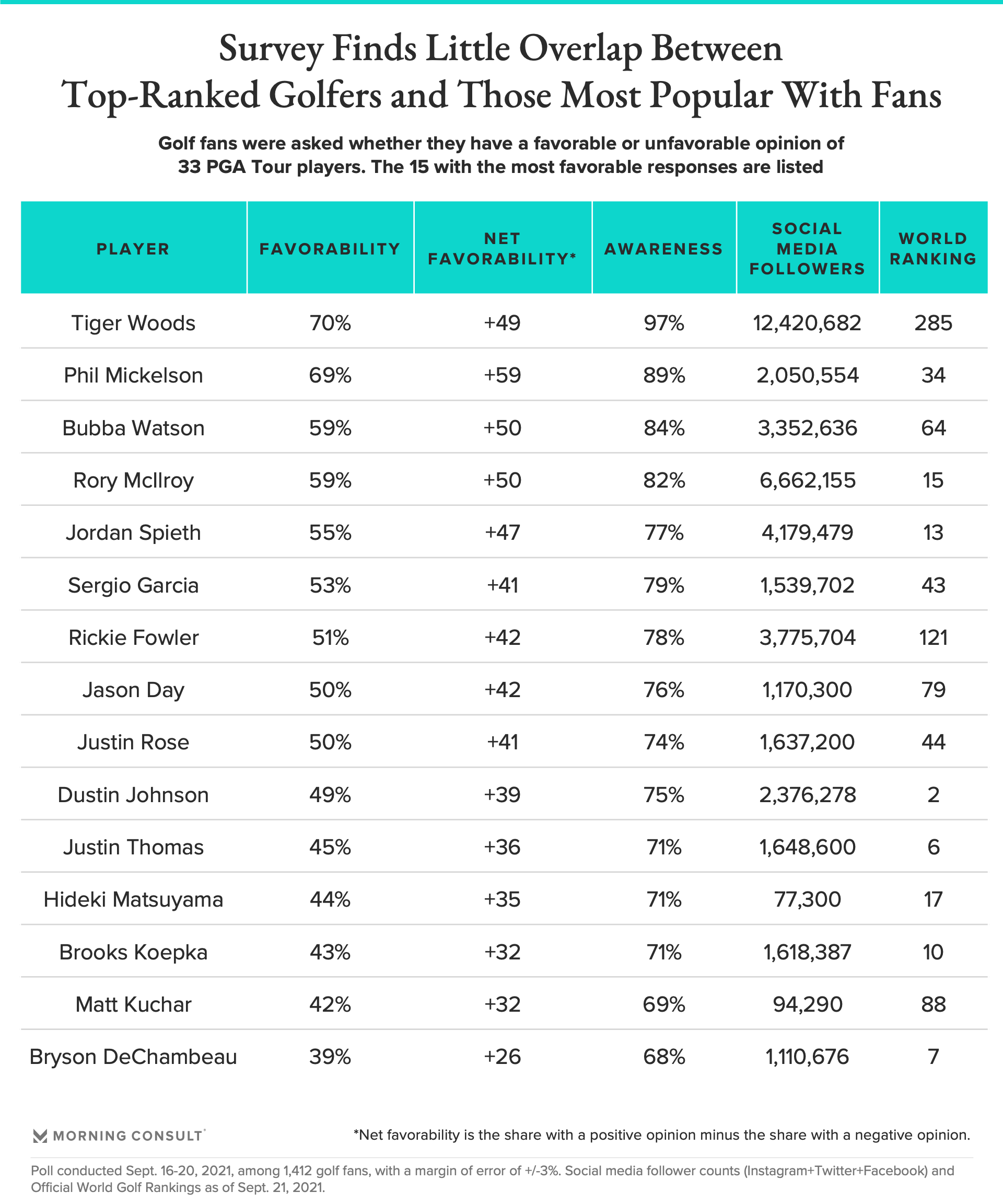 Tiger Woods garnered the largest share of favorable responses from golf fans, 70 percent of whom said they have a positive view of the 15-time major champion. Over the past two decades, Woods has been the only golfer whose presence at events is capable of single-handedly boosting TV viewership— especially when he’s in contention to win. The 45-year-old, however, hasn’t competed since The Masters last November due to injuries sustained in a February car crash.

Sixty-nine percent of golf fans said they have a positive opinion of fellow PGA Tour veteran Phil Mickelson, putting him within the margin of error of Woods in terms of popularity. At age 51, “Lefty,” whose win at the PGA Championship in May delivered the most-watched final round since 2018, is ranked No. 34 in the world. Bubba Watson (59 percent), Rory McIlroy (59 percent) and Jordan Spieth (55 percent) rounded out the top five in fan favorability rating.

The survey also found that the most popular players among golf fans are also the ones most likely to attract the interest of the broader population of sports fans. Fifty-two percent of adults who identified as sports fans said they’d be interested in the outcome of a PGA Tour event if Woods were in contention, the highest figure of any player, followed by Mickelson (43 percent), McIlroy (35 percent), Watson (34 percent) and Spieth (33 percent). 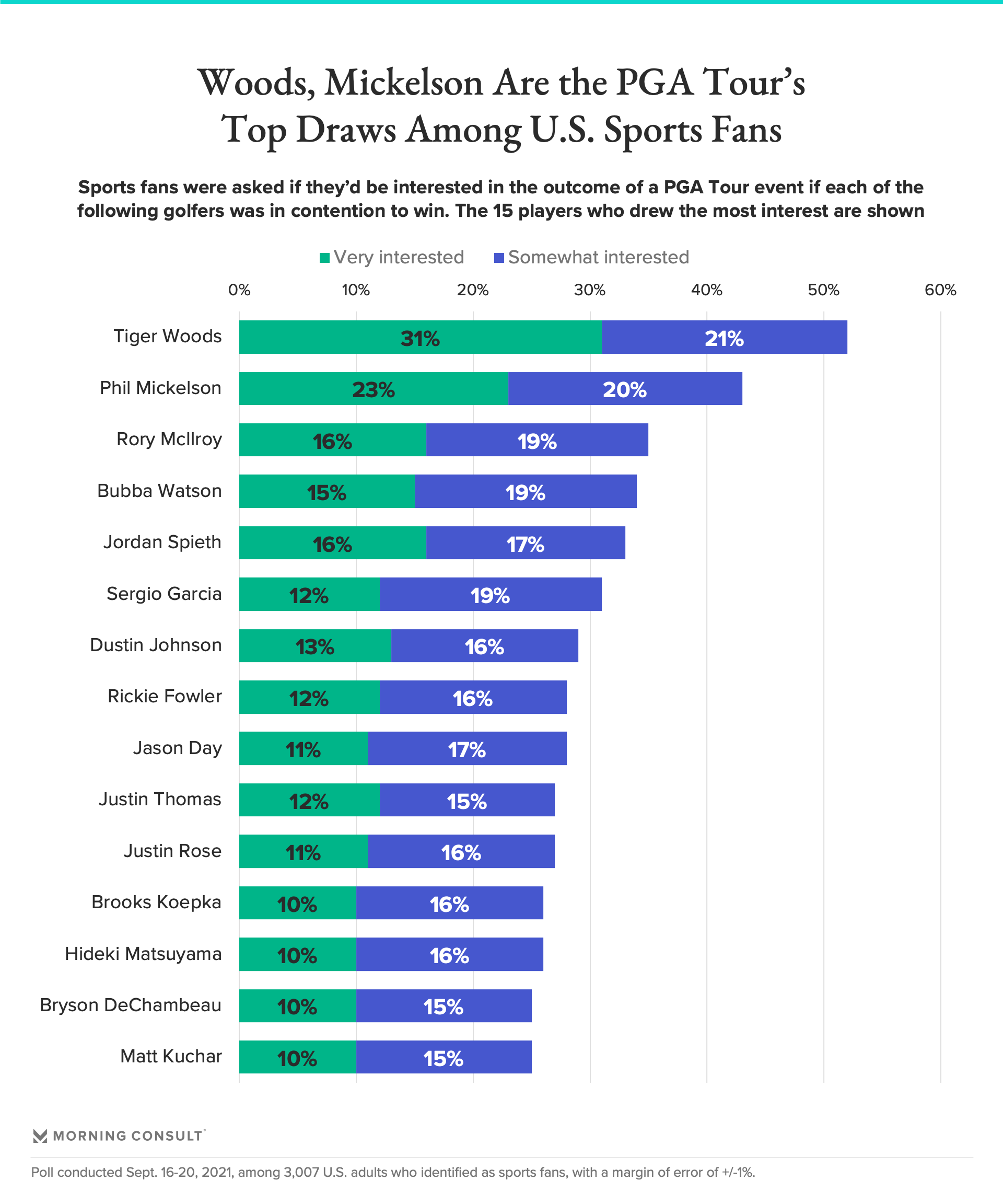